After playing Barkmann’s Corner and realizing how much the difference between the old Bog and new Cross check rules changed the scenario we decided to go way off the reservation.

Back in the 80’s they made a movie called ‘The Final Countdown’ about a modern US aircraft carrier being transported to the vicinity of Pearl Harbor right before the Japanese attack on December 7, 1941. F14s vs Zeros. A6 and A7 attack aircraft vs Japanese carriers.

It reminded me of a comment one of my old Brigade Commanders made to me 20 years ago. “M1’s are the modern Tigers. But we have 8000 Abrams and the Germans only built 1200 Tigers.” So welcome to the final countdown, Normandy style.

We played Barkmann’s Corner a second time. We used M1’s for the Panther and an American dismounted mechanized infantry platoon with a Dragon for the Infantry. The toys look kind of the same. Big metal box on tracks with turret. Dudes in holes with rifles and panzerfaust, or LAW, as the case may be. No real WWII equivalent for ATGM’s, that an addition. Burning tanks look the same. 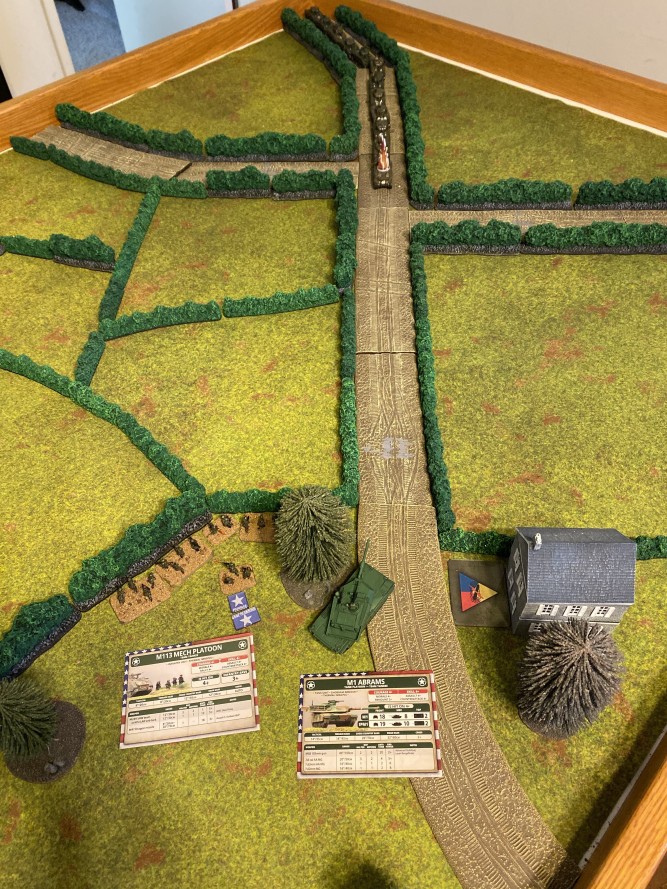 Startex. You can see the stat cards. Advanced stabilizers are just like normal stabilizers, but no +1 to hit. Yes, that means you can move 14 inches and roll for two shots just like you havent moved. Laser rangefinder gets rid of the 16 inch to hit penalty. With an AT of 20 long range armor penalties don't matter. Notice the LAWs on the infantry gives every stand a built in 'faust or better yet, a 'schrek.' And the Dragon. Well there is nothing quite like it in FOW. 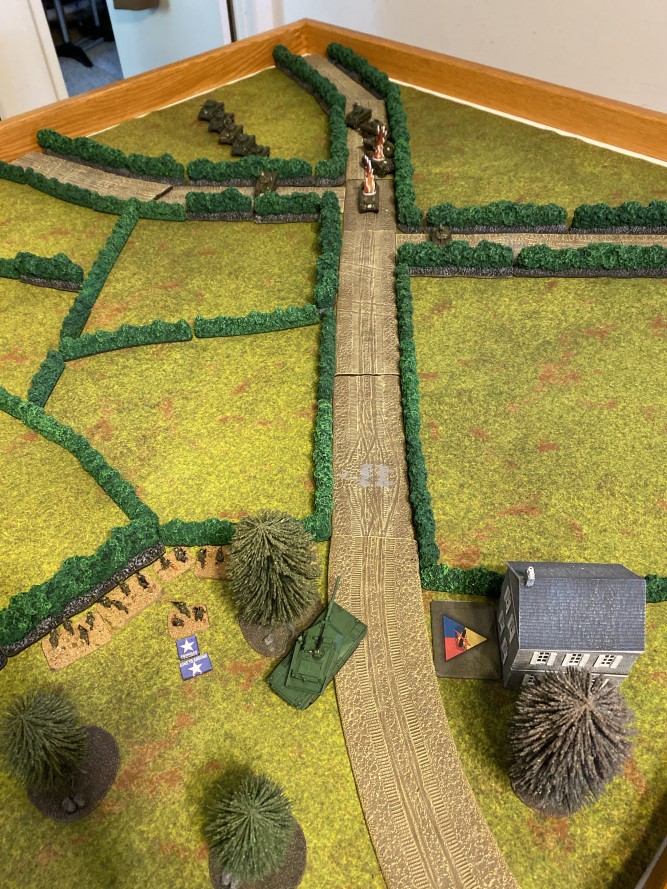 End of Abrams turn 1. The American's scatter, but most of first platoon gets hung up on the bocage. Abram's crew decides Shermans taste like chicken. nom. nom. 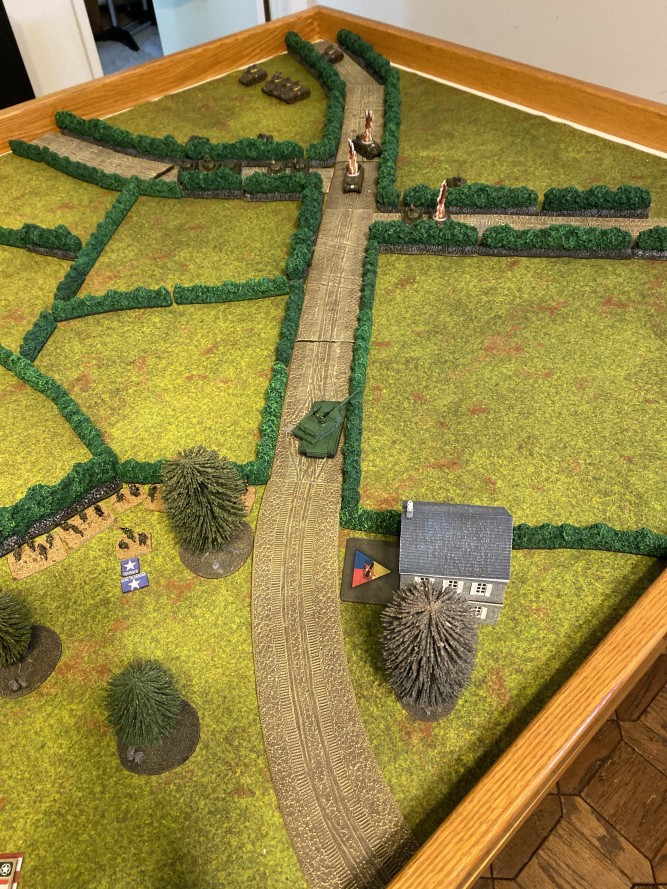 End of Abrams turn 2. The American's come on in the same old way. Flanking to the left and right, but this time the Abrams pushes up. Score another Sherman. 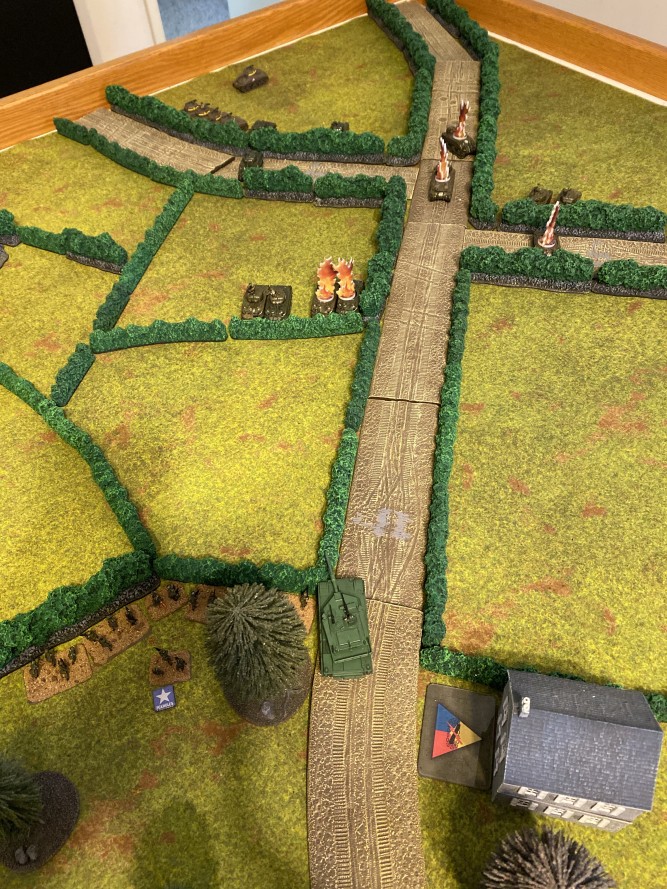 End of Abrams turn 3. With the Abrams advanced, the Shermans try to push up on the opposite side for a future flank shot. The Platoon on the left flank pulls back and asks, what the .... was that. No matter, The Abrams backs down and in conjunction with the Dragon, bags both company command vehicles. In real life wire guided ATGM's like the Dragon HATE trees, limbs, branches, anything that can catch a wire. But here, no worries.

End of Abrams turn 4. The American realizes he best not expose himself until he is ready to rush. Pulling away from the bocage to hide he continues to move up. Than the Abram's shows off. It moves 12 inches forward and guns down another tank. The American is at a loss for words. 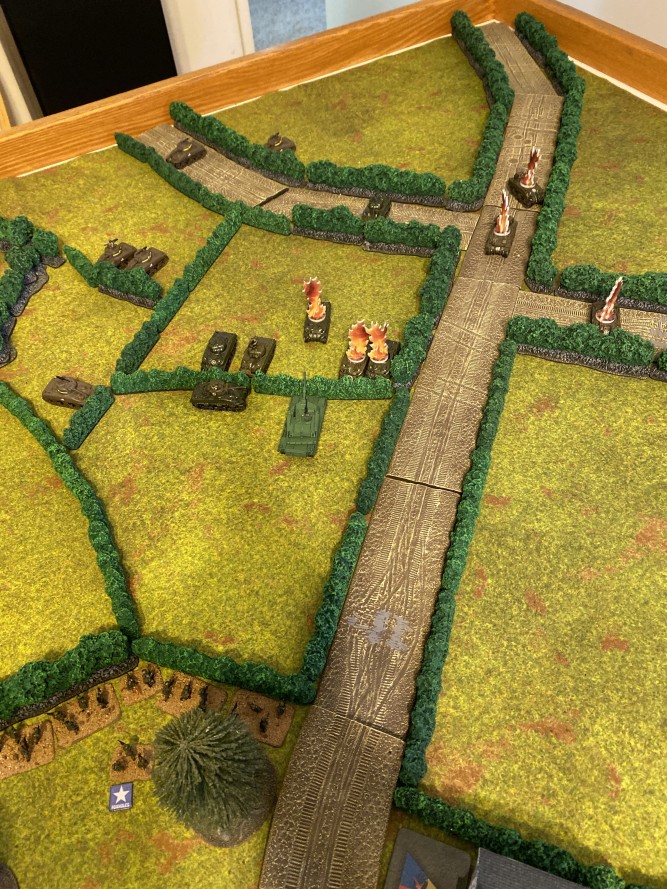 The American is really not fully in position, but sees a chance. At the top of 5 he rushes in to get flank shots. AT 10 vs side armor 8. 1 hit and a bounce. 4 tanks are left in the line of fire. 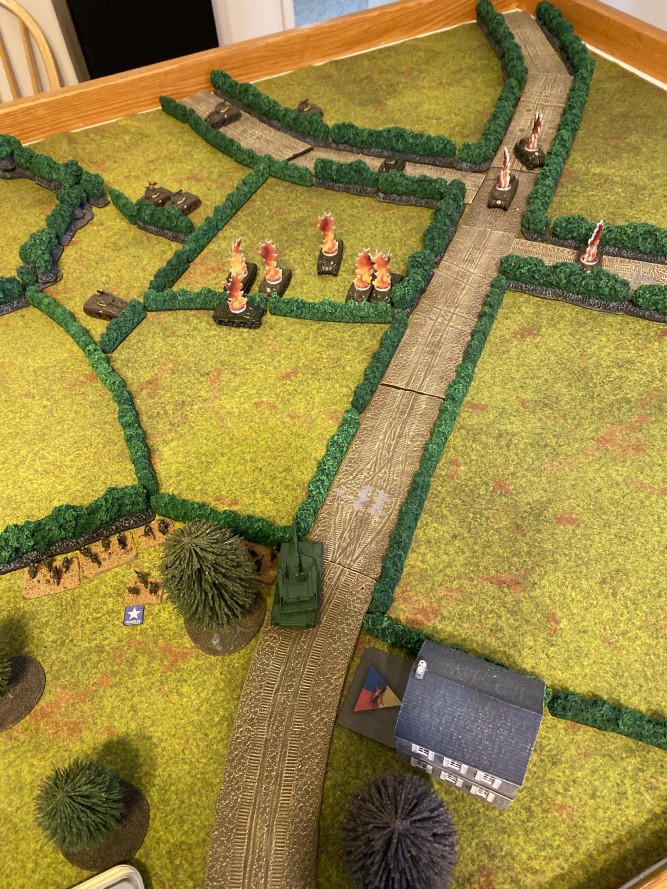 So at the bottom of 5 the Abrams backs up and fires with support from the rifle platoon. Scratch 3 more Shermans. Now the company commander is gone and one of the 3 tank platoons is in bad spirits. 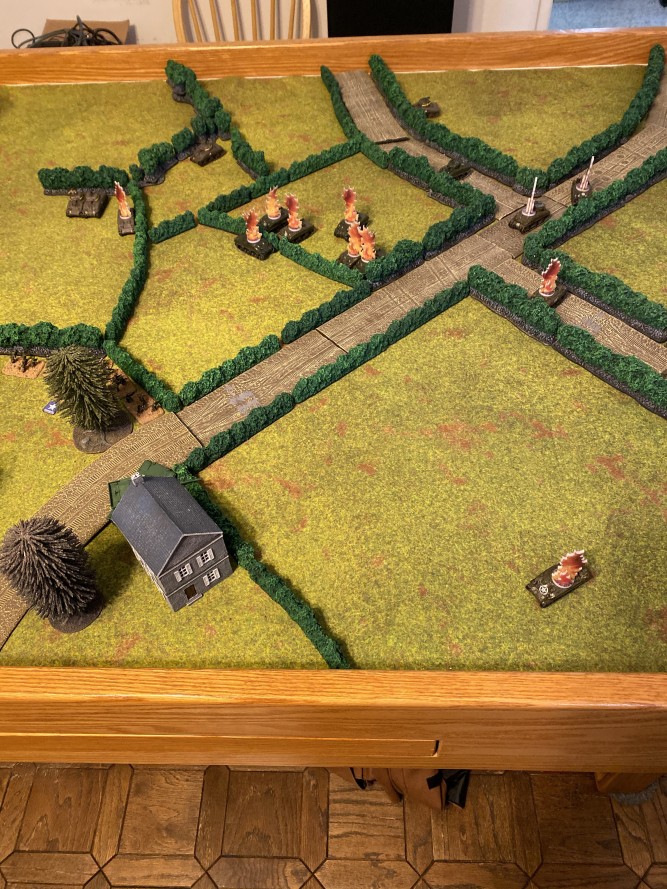 While the Abrams was feasting in the middle of the board, the platoon on the American's left flank tried to sneak around, wide left. With other things taken care of for the moment, the Abrams moves the fight over and ends the pretentious American flanking move. nom. nom. Meanwhile, the infanry platoon slams another Dragon into a Sherman. They can defend themselves very nicely, thank you very much. The American now has no command team and 2 platoons in bad spirits. 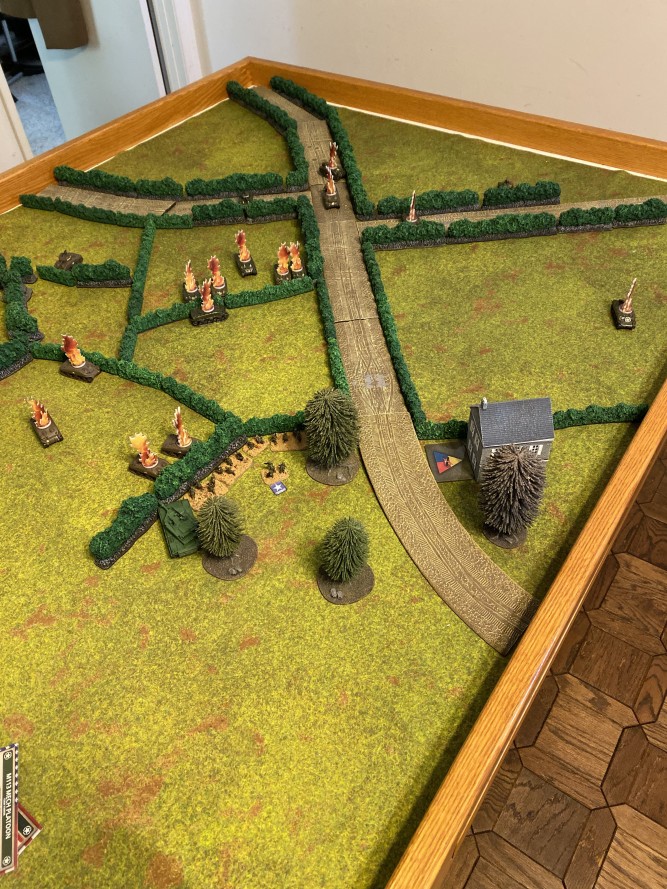 This was a very popular scenario. We played it about 3 or 4 times as everybody wanted to take a shot. This was the most competitive of the sessions we recorded. And as an American player, we don't want to give the German's too many points! (Free chicken).

Two things stood out. The mobility of the Abrams was incredible. Its ability to move 14 inches and fire fully stabilized meant that the American got 2 shots on tanks every turn. The fact that those shots were fully stabilized with no range limitations was awesome. Generally, all the gunnery gadgets were overkill because the tanks mobility put it in optimal firing positions. The protection was nice, if nothing else it encouraged aggressive maneuver by the American, but it was the mobility that made the difference. The second thing was the lethality of modern infantry to old tanks. The Dragon sniped 2 or 3 tanks, but it was the results of the Sherman assault on the infantry platoon that brought it home. 2 tanks went in and poof, no more tanks. LAWs are worthless against T72s in Team Yankee but are as lethal as a Sherman 76 in FOW.