This battle was very tumultuous one. The Americans were in a bridge head situation. They were defending objectives in the center of the town and just to the south of it. Their forces were scarce at the beginning. Only a section of m3 Priests, M4 Mortars, a Cavalry Recon, and an veteran rifle platoon. A platoon of Sherman 76s were in ambush.

The Germans came on strong and hard on the left flank. Two units of panzer Grenadiers with their supporting half tracks and a armored car unit pressed the Americans. On the right flank there was a long distance threat from 2 Tiger Is and two Puma armored cars. The Americans popped their ambush right away to defend from the threat from the panzer Grenadiers. Machine gun fire from the Sherman 76s and cavalry recon held off the Germans for a while. On the right flank there was a forlorn hope victory as the M4s managed to machine gun one of the Pumas and force the other one to rout.

American reserves started to slowly come in. Eventually however they came in in enough force to surround the Germans on two sides. The Tiger Is we’re mostly blocked by terrain from the town and kept out of the battle. Weathering machine gun and mortar fire from the Americans whittled down the advancing Panzer Grenadiers. The battle became eventually one for the Americans to lose. The commander however made a fatal error and did not based enough tanks and infantry near the objective to prevent Germans from taking it. This resulted in a German victory as the last remnants of two Panzer Grenadier platoons managed to knock out the Sherman tanks near the objective. 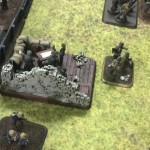 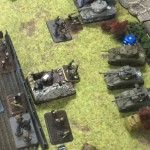 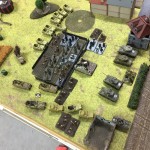 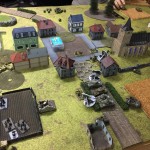 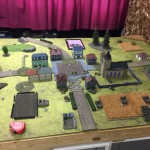