A 'faust a day keeps the Shermans away

My first game of a tournament in Utrecht, the Netherlands. I was expecting a simple battle plan tournament and had created a list focused on attacking, but the tournament organizer decided all of the axis forces would defend in a Breakout scenario.

My force really isn't made for defending against tank forces: it simply lacks anti-tank capabilities, especially in a scenario with reserves. So both grenadier platoons start on a objective, and the Marders go in ambush. The Tigers, mortars and flame-tracks go into reserve.

My opponent brought a US tank list, and deployed focusing on the objective on his right. That meant I had to pull off an effective ambush... and hope the inevitable assault would be a long time coming. 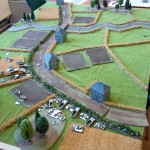 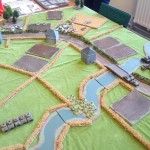 The American troops all race forward, and I realize the assault might be upon me sooner than later. I have to reveal my ambush in turn 1, hit four tanks, kill one, bail two. Uh oh.
The Shermans retaliate and kill all of my Marders. Well, that was effective!

There was a silver lining, however, when my Tigers came in on turn 1, and managed a long range shot on one of the HQ tanks and actually managed to kill it.

My flame-tracks came in on turn 2 and started to hunt for the three mortar half-tracks my opponent left behind.

My opponent kept pushing his troops forwards, and I already feel the pressure. 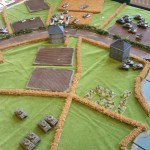 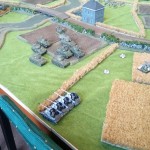 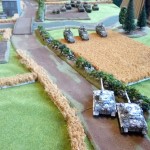 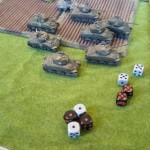 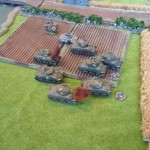 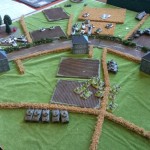 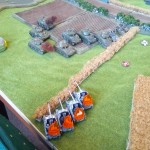 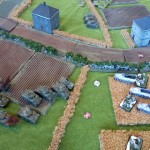 The Shermans burst through the hedges... ok, wait, two out of five Shermans burst through the hedges (Robby got really unlucky here) and get ready to assault my grenadiers.
They drive forward, aiming to smash the single German team... but in an amazing turn of events, I actually hit TWICE with the 3.7cm gun of the half-track, and once with the single panzerfaust. But then Robby rolls a one for his armour save against the 3.7cm gun, and both Shermans get bailed by my defensive fire. Huh.

I'm not proud of what I did next, but hey, it kept me in the game: I moved one grenadier team forward, assaulted the two bailed out tanks, and since there was defensive fire possible, captured both tanks. Ouch.

The flame-tracks keep dousing the mortars, destroy one, and bail another track now and then. 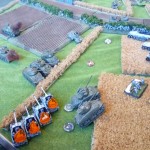 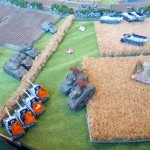 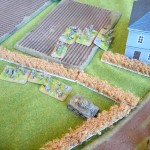 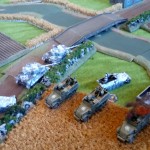 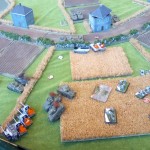 The left-over Shermans, Stuarts and infantry push further into my deployment zone, and kill enough half-tracks to force a Last Stand which I failed. I lose a few teams of infantry in a close combat with his remaining HQ tank and single Stuart which hadn't failed its cross checks, and after a short and intense fight, manage to bail both and then capture them.

Meanwhile three Shermans of the last tank platoon make it onto the objective as well, but once again my opponent is thwarted by the panzerfaust and armor save of 1 against the "normal" attacks. Seriously, hitting and killing with a 'faust, sure, but consistently rolling 1s against these standard AT 2 attacks is just... sad.

Unfortunately, losing the assault means the last two Shermans are out of command, and when both these tanks and the mortar half-tracks fail their Last Stand, there is no formation left. 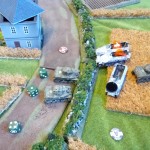 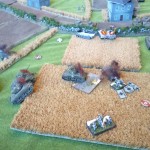 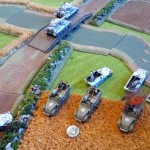 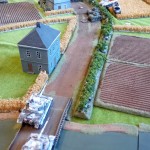 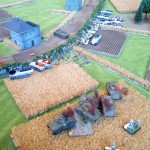 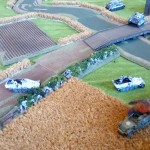 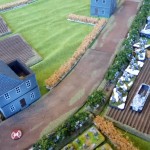 All credits go to Robby for keeping the pressure on, and kept working towards capturing the objective despite the losses he suffered. To sit still was to fail, but with many failed cross checks and plain bad luck regarding defensive fire, he simply wasn't able to kill enough troops and secure the objective.