We set up our nebelwerfers and 8.8s in the North west, expecting an american push to the south east we set up 2 pak 40s, 2 jagdpanzer IVs, and some panzergrenadiers in halftracks.

(pak 40 platoon leader)
We could hear American armor making its way towards us from the West through the boccage, being as we could not see them the anticipation was building. We set up with one of us facing along an open spacing to the south west of our location and could hear the engines of the jagdpanzer IVs fire up behind us as we signaled to them that we heard an American advance coming. We had no idea the numbers in this force, but could hear there was more than one engine making it’s way in our direction. Out of my line of sight I hear a shot and the zing of American high velocity round flying through the air at the other pak 40 crew. In the distance I see American aircraft and hear the 8.8s firing flak, and see one of the planes go down in flames. Working my crew hard to get our gun into position to help make a difference the jagdpanzer IVs and the other pak 40 crew return fire and I see smoke and flame over the boccage as one of the American vehicles brews up. I know reinforcements are supposed to be arriving in the area of the nebelwerfers position in the form of Tigers, my question of if they arrived in time to assist is answered as I hear the rapid fire of their machine guns in the distance followed by the distinct sound of the nebelwerfers rockets, a sound that must send dread into those on the receiving end of the barrage. To our right the panzergrenadiers had dismounted and advanced towards the boccage seeming to prepare to try to flank the American armor.
(Tiger platoon commander)
We crested the hill just in time, seeing American forces beginning to push their way towards the nebelwerfers. The Americans fortunately had not spotted the Panzer III sitting in hiding watching the road and sighting the nebelwerfers in so we would not have the task of taking on the troops alone. Not knowing how prepared we were for them to come this direction the American troops have placed themselves exactly where we want them. I give the command to advance and have the gunners raking the American platoon with MG fire relentlessly, and give the order to halt for the nebelwerfers to release their carnage. Overhead we hear the sound of the nebelwerfer rockets, to us they are a wonderful sound, to the unfortunate American targets I am certain the sound brings absolute terror to their hearts and minds as the rockets rain down among their ranks. Peering through my coupola I can see there is much disarray and chaos in their forces as they attempt to flee down the road to the cover of the boccage. Watching them round the corner I give the order to advance yet again.
(pak 40 platoon leader)
Our gun is finally in position and with multiple targets available. I can now see that the Americans have brought M10s to the field of battle, our lucky day as our mighty guns will make short work of their thin armor. Pak 40s and Jagdpanzer IVs open up relentlessly on the M10s who have placed themselves directly in our kill box, punching round after round into their hulls. 2 brew up with the final remaining M10’s crew abandoning the wreck and retreating into the distance, no longer a threat. The panzergrenadiers attempt an advance through the boccage where an unseen American force must have been hiding in wait as I can hear the sound of American machinegun fire and see the panzergrenadiers retreating and taking up defensive position a very short distance away.

The American forces make themselves seen and advance charging like wild men through the boccage, seeing the halftracks with their machineguns, the jagdpanzer IVs with theirs, along with the panzergrenadiers and all of the guns they also have with them as they only sustained minor loss of 4 men before pulling back. Still seeing our force bristling with machine guns pointed at them in wait, they charge, they charge directly into our hail of hot lead and clouds of expended gunpowder, whether through courage or insanity, they charged nearly to the last man into our barrage of gunfire. The few remaining soldiers in the advance retreat through the boccage to not be seen again. Thinking there may be more the panzergrenadiers continue lying in wait as one of the jagdpanzer IVs behind us brews up as an American plane races low and fast overhead. We can hear in the distance to the North East the sound of American armor as the ringing in our ears begins to clear, knowing full well that is not a direction we want to be hearing them coming from as this would indicate they have gotten past us somewhere. The remaining Jagdpanzer IV races across the open field hoping to put a stop to the American capture of vital supplies, as the main force of panzergrenadiers is having a difficult time gathering their bearings, knowing without a tow vehicle we are out of the fight unless other American armor decides to flank from this direction we wait.
(Tiger Platoon commander)
We hear over the Radio Knispel has arrived and is going to attempt to pinch the American forces as we saw 3 shermans ahead round the corner in the road ahead of the infantry running, attempting to keep up. The Panzer III has joined us in pursuit at this point after having zeroed in the nebelwerfers one last time in the area of one of the areas of supplies the Americans seem to be after. We unleash more machinegun fire into the American troops fleeing down the road and hear the sound of rapid succession of American 76mm guns firing and see smoke in the distance and fear the worst for Knispels crew, leaving his tank sitting visible is not something I would expect him to do, but everyone makes a mistake eventually, hopefully that is not what happened and if it was hopefully it was not his last. The nebelwerfers rain fire upon the area designated by the Panzer III, Nobody who is sane would stay in that area. To our surprise the troops on the road about face and charge, being cut down by machinegun fire. Sometimes desperation drives men to do crazy things. I see in the distance panzergrenadiers exiting the boccage and opening fire with their machineguns on dug in American forces. I see a Jagdpanzer IV exit the boccage and join the fray spraying hot lead and hellfire at the enemy forces, but unfortunately see an American 76mm round rip through both sides of the vehicle spraying a geyser of flame and smoke into the air as the ammunition must have been struck. I hear over the comms that the American forces are fleeing the area, they have gotten their prize. Knispel was indeed knocked out of the fight but will return once his tank is repaired. Unfortunately we were soo busy fighting that we placed ourselves out of position, not expecting American shermans to come in soo close to the supply Caches. Without supplies to continue the fight in this area we must pull back. 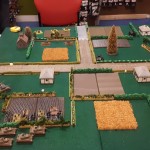 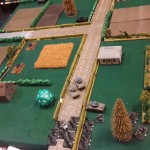 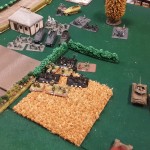 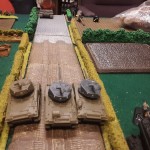 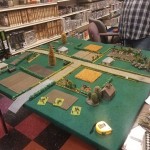