Hauptman Winters looked up from his map as he heard the whine of American tanks making their way towards the top of the mountain and into the village. As he looked up he heard the shouts of team leads towards their fellow rangers and the setting up of artillery pieces. knowing what was to come he called a stand to on the radio and prepared for the defense. rangers under naval gun, CAS, and artillery support pushed onwards past the small French village into the defensive positions of the panzer grenadiers. With the supporting squadron of Sherman tanks, first platoon of rangers assaulted the entrenched grenadiers being driven back by effective machine gun fire and panzerfausts destroying the Shermans. The second platoon of grenadiers were destroyed by effective enemy artillery fire and an armoured assault. Under crippling fire the panzer 4 reserves and the troop of panthers pushed onwards to take up defensive positions being destroyed on the push up but the panzer 4s attached themselves to the valuable troop supply of diesel. Winters realizing it is a fight or break contact situation engaged the American squadron commander in a heated battle at the crop of woods on the left side of his defensive line destroying the American and his 2ic breaking both companies of hostiles causing them to fall back in order to reorganize for a later attack. 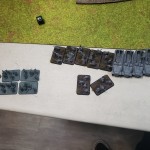 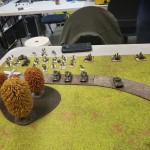 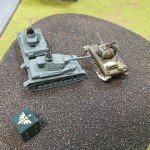 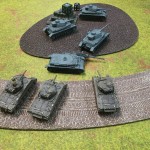