Missed it by THAAAATTT much.

Our fight went all the way to round 6. When we measured out the objectives the Americans had a single stand from their armored rifle platoon that was between 1/8 and 1/4 inch from the objective. Thus the game was a draw.

The battle started with the Germans set up on left side of the table and the allies came in from the right. The Germans started with their armored Panzergrenadier platoon with 3 Shreks and panzerfausts sitting on the left objective. The right objective was behind the river and multiple minefields at the crossing points. The Moblewagens were in overwatch position in the center of the board behind some tall terrain. The Pumas were over on the far left flank to keep the Americans from the quick dash up that side. The 5 tank Panzer Iv platoon was in Ambush. The HQ (2Panzer4), PLatoon of 5 more Panzer IV, and 2 more Pumas in reserve.

Turn 1 American
The American advanced towards the German left the objective was to secure the bridge and prevent the Germans from blowing the bridge. American fire needing 7’s in most cases was ineffective this round.
Turn 1 German
German Panzer IV popped out of ambush on the road next to the Bocage and began taking their toll on the Sherman 75 group killing 1. The Pumas surprised the American armored Infantry Half tracks with their long-range gunnery expertise and killed 1 bailed two others. My opponent’s comment was they were so good as scout and gone to ground he didn’t even see them sitting there when he moved into the Puma’s view.

Turn 2 American
Americans continue long-range duel with Panzer IV. The Sherman 76 score a hit, but only bail the Panzer IV. The Sherman 76 succeed at shoot and scoot back away from the bocage row. The American Artillery starts to repeat bombardment on the Panzergrendiers. A couple of hits, but the Germans luck holds and no casualties amongst the infantry.
Turn 2 German
Germans Panzer IV’s return fire killing another Sherman 75. The Pumas account for another half-track from the two who failed to remount from the prior turn.

Turn 3 American
American artillery continues to pound the German infantry, but again no casualties. The Sherm 76 get two solid hits on the Panzer IV, but again luck holds and the two long-range shots ricochet off the armor of the Panzers IV’s. The Sherman 75 withdraw behind the hill to support the Armored infantry attack.
Turn 3 German
The German Panzer IV platoon in reserve arrives and moves towards the battle line to engage the left flank and support the infantry. The Panzer IV platoon in the center takes aim at the Sherman 76 and destroys one.

Turn 4 American
Artillery hits the Germans once more time before the assault begins from the advancing American infantry. Succes the combined Priest and Mortars take out 2 stands of infantry. The Sherman 76 platoon destroy one of the Panzer IV in the center.
Turn 4 German
No reserves arrive
The German center Panzer IV’s take out the Sherman 75 platoon that came out from behind the hill.

Turn 5 American
The American infantry assault the Panzergrenadier platoon, but take 6 casualties in the process and are forced back to their starting point.
The rest of the American fire proves ineffective.
Turn 5 German
The German infantry fails to rally and remain in their fox holes, but do manage to kill 2 more stands of American infantry in front of their positions. However, no counter assault to force them away from the objective takes place. The German Panzer put paid to the Sherman 76 and destroy 2 more. One Sherman from the HQ is destroyed by the other panzer platoon that came up from the left.

American turn 6
The American resume their bombardment of the tanks and manage to kill 1 Panzer IV in the center group with the priest battery. American Infantry dig in.
German turn 6
Game called due to time and was deemed a draw. 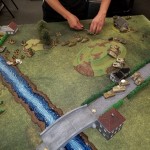 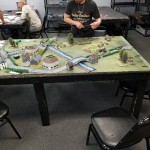 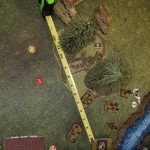