Set up the Germans set up the 2 Puma units on the far left flank. They used their spearhead moves to get up close to the 25PDR on the British right. The rest of the army set up in the center of the field behind the two vineyards in the center of the table.
The British set up with the 25 pounders groups one left and one right. The infantry was on top of the objectives. The HQ was near the German left objective. The two Carrier patrols were sitting back waiting to move forward to contest objectives if needed. The 6pdrs are in ambush

Turn 1 Germans
German advance up the center and engage the British infantry dug into the objectives. One Infantry team falls to the combined tank fire. The Pumas account for one 25pdr
Turn 1 British
The 25pdrs account for one puma. The rest of the fire is ineffective against the advancing Germans

Turn 2 Germans
The Germans continue to advance up the center. The lead Panzers are able to assault and force the British infantry back from the objectives.
Turn 2 British
The reserves of a Sherman platoon arrive from the German right. The 25pounders exchange fire with the pumas but no hits on either side

Turn 3 Germans
The puma that was last standing from turn 1 fire takes the better part of valor and runs away. The Lead Panzers assault the infantry again and kill off the platoon down to the last stand. The panzer grenadiers advance in their half-tracks as to the other Panzers and the HQ. The follow-up and HQ panzers put the Shermans out of commission. Pumas account for another 25 pounders.
Turn 3 British
The ambush comes out and the M10 platoon arrives from reserve. Killing 3 of the lead Panzers and bailing a 4th.

Turn 4 German
German’s remounts and the two from the lead platoon take out three M10. The follow up to take out the Bren Carriers that had to move up to contest objectives with the Infantry out. Pumas kill a third 25 pounder
Turn 4 British
The British take out another panzer from the lead group and two of the half-tracks but only one german infantry stand dies. British infantry tries to get the Panzer IV’s but are shot off the assault.

Turn 5 German
Germans continue to put the British through the grinder. The Infantry platoon that failed the prior assault gets mulched. The M10 dies, the 25 pounders get killed and the second 25pdr takes its first loss. The British are left with their HQ and 6pdrs left from their formation and only 3 25 pounders from their support units.
Turn 5 British (The Hail Mary)
British manage to kill the last two german half-tracks. They destroy or bail out 4 of the second platoon of tanks. The HQ section assaults the remaining Panzer in an effort to force a roll to run away letting the three bailed panzers get caught. The Germans pull out all the stops and bring 18 dice of defensive fire from the last tank + the 2 HQ tanks+ 2 stands of MG and 2 stands of Panzerchrek. Needing 5’s to hit and hit a whopping 12 times and the British HQ goes “Poof” 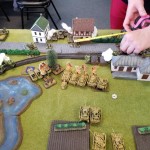 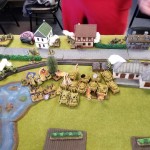 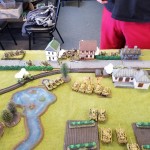 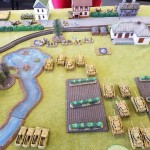 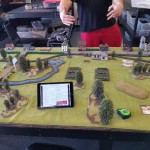 1 Person Has Recommended Kodoth For a Commendation