Turn 1: Lot of movement on both sides but not much for casualties. Germans occupy foreword houses and proceed to have a firefight with American troops in occupied buildings across the road that lasts the whole game with few losses on either side. Panzers advance and chew up some Jeeps that promptly flee. A pair of Shermans on the right blow up a looted tank and Stewarts down some infantry who stay pinned for the rest of the game.
Turn 2: Pak 40s kill several Stewarts but the last one stubbornly remains. A lot of maneuvering for little result in this turn as both sides hide. Heavy scout cars take losses and flee.
Turn 3: Stuka Dive bombers arrive and the destruction begins. Bombs knock out a Priest and ruin their effectiveness. HMG nest massacre the advancing American troops on the right and the Panzers knock out a Sherman. German Infantry advances en masse towards the bridge unimpeded.
Turn 4: Stuka Dive Bombers continue to wreak havoc on the back lines as Priests are removed entirely. Shermans and Panzers play games amongst building but no casualties. Infantry blast at each other in building but no losses are incurred.
Turn 5: Shermans in the middle are mopped up by bombs and Panzers. 8.8’s knock out another hiding at long range. Panzers and Shermans on the left uselessly pepper each other on the left.
Turn 6: Unopposed German infantry hold the objective and the Americans are beat into a retreat with few forces remaining. Major Victory for the Germans. 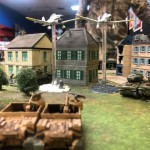 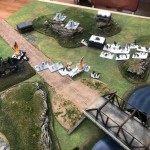