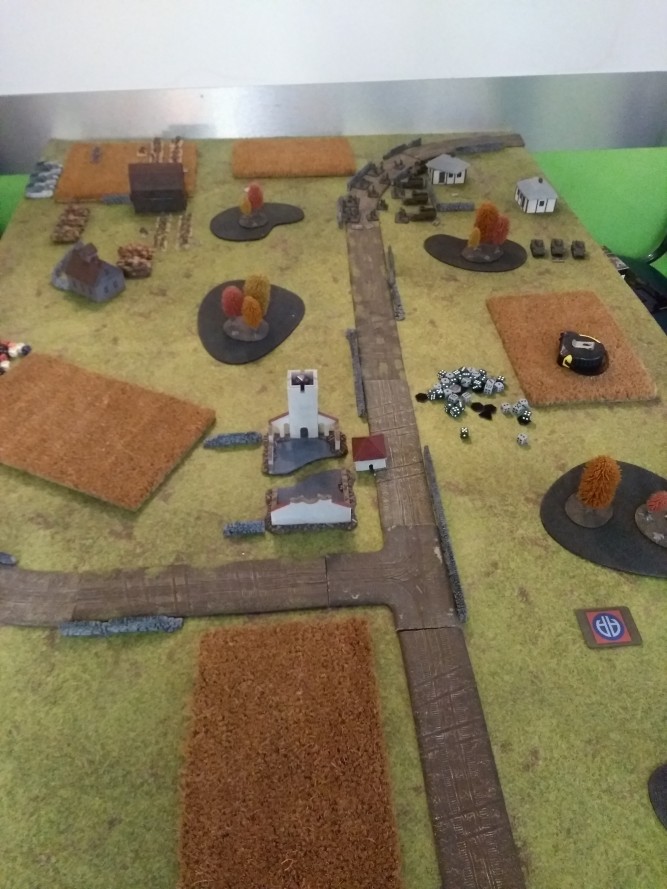 Counterattack Vs Fallschirmjager (US defending)

Having taken a battering 2nd Armoured were looking to prevent further German success around Vire. Hoping to lure advancing fallschirmjager into a trap the US prepare a counter punch with M4s in reserve and 76mm Shermans lying in ambush. 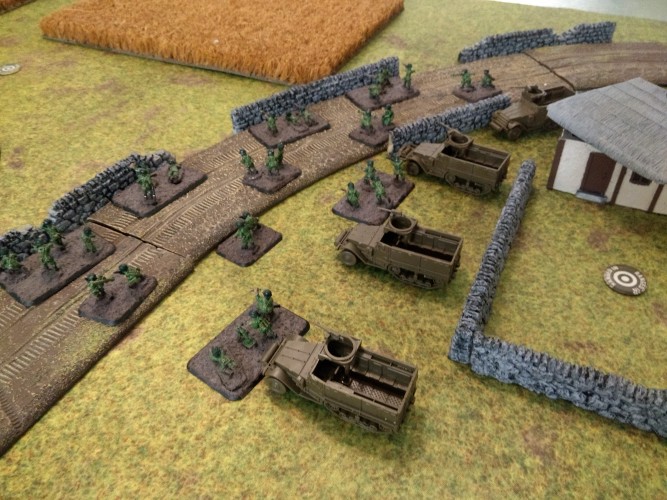 A veteran ARP is dug in ready to hold the US right objective, waiting for the medium tanks to counterattack. 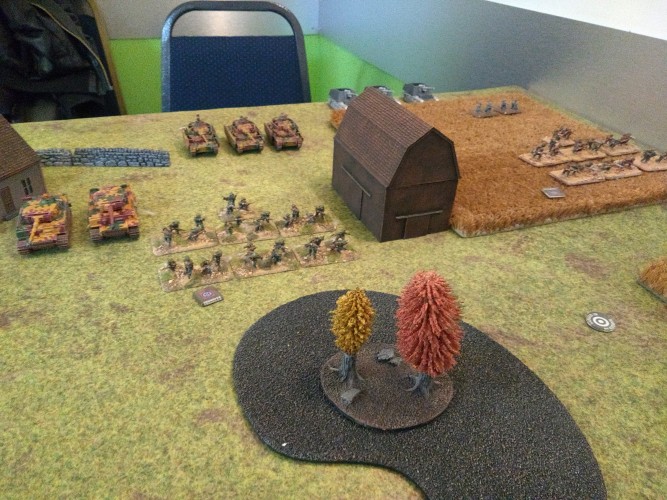 The fallschirmjager ready to attack what looks like a weak US force.

The initial moves by both sides are tentative as fallschirmjager move up in cover to avoid small arms fire and Stuarts remain hidden behind trees. Tigers destroy a half-track but German Hummels fail to range in on the ARP, the US 76s remain in ambush.

With the Germans moving cautiously on the right I take advantage as my 75mm Sherman HQ and 105mm platoon arrive from reserve on the left flank with rear shots on the panzers, however they only bail a single Panzer IV. 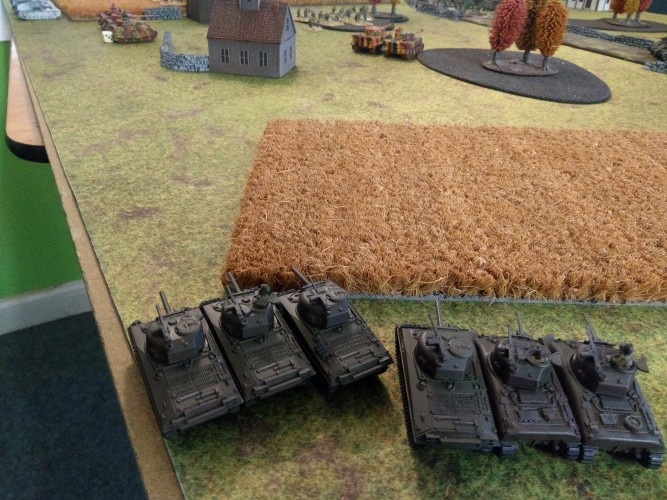 Shermans arrive on the German flank, drawing the attention of the German panzers away from the right objective. 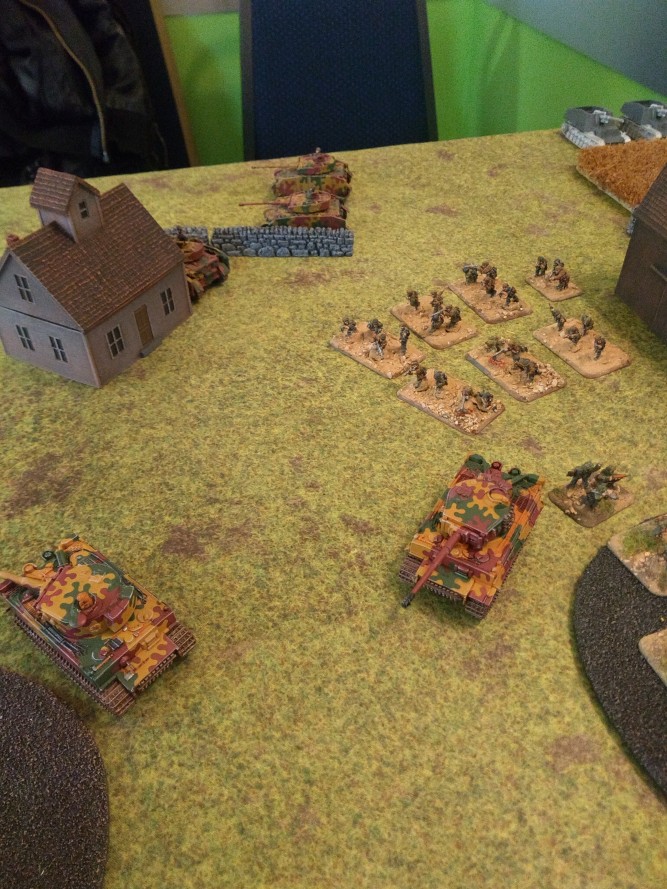 Germans get into position for the attack but are cautious of 76mm M4s which they suspect are hidden in front of them.

The US shermans who have outflanked the panzers dodge all return fire as one tiger keeps an eye on the objective and bails a Stuart as they move up to threaten the fallschirmjager. The flanking shermans hit well with return fire but German armour proves sturdy and the only result is again bailing out a panzer IV.

In the centre however the US tankers see results as 76s finally ambush from concealment and brew up one of the big cats, who had drifted into close range to cover the infantry. The panzers fail to hit the careful shermans at long range and in return a Panzer IV is finally destroyed outright by a 76mm shell. Furthermore the remaining tiger fails its last stand and bugs out, leaving a hole in the German offensive line. 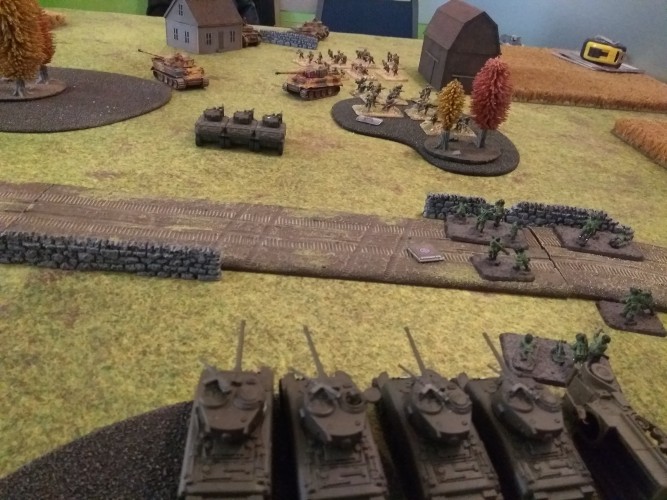 76s ambush after patiently waiting for the Tigers to enter kill range. 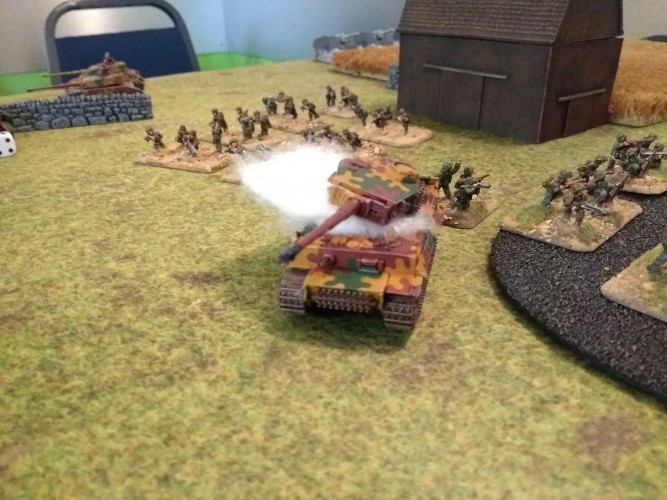 Kaboom! The fallschirmjager flinch as their best AT asset goes up in smoke, its partner would soon leave the battle, leaving nothing to give them close support for the assault.

The Panzer IVs rise to the unenviable task of being the German's sole anti-tank asset by seeing off the Stuarts who were threatening to rake the fallschirmjager with MG fire, shooting and scooting to hide from the US HQ and 105s.

On the US right things were going better for the Germans as artillery begins to tell, knocking out another half-track and several infantry teams. Fallschirmjager assaults go in with smoke cover pushing the ARP back to its second line and removing both LMGs. 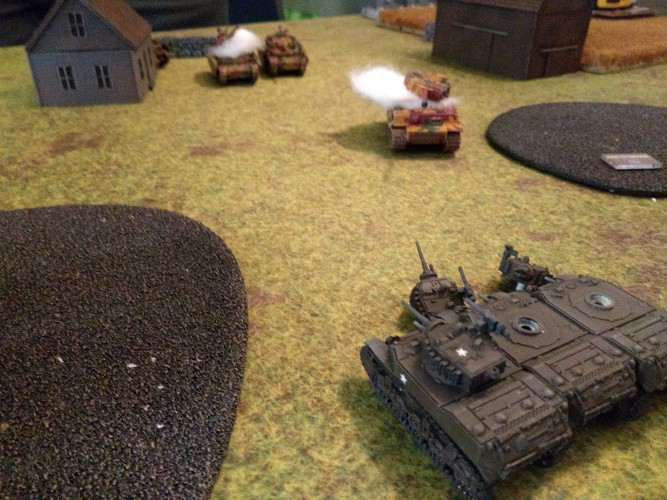 Stuarts feel the wrath of the panzer's guns protecting the fallschirmjager. 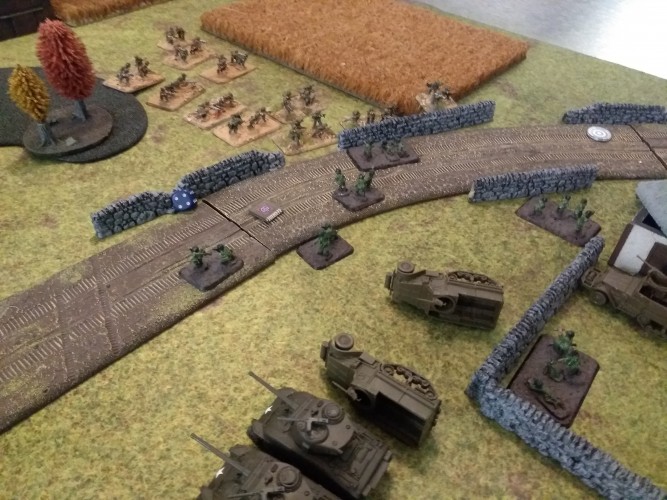 The fallschirmjager assault with smoke cover and push the ARP back, the objective is still out of reach however.

In return for their successful assault the fallschirmjager suffer a hail of fire from both the ARP and 76mm Sherman platoon which wipes out the unit depleted by earlier small arms and pins the second fallschirmjager platoon.

Back in the German rear the Sherman HQ blitzes then makes a tactical move putting them directly behind the remaining panzers. Their 75mm guns sound and a 2nd German tank is destroyed.

On the US right the fallschirmjager unpin and move to assault again against the objective itself. Four teams hit a half-track but the team attacking the ARP teams in the house is cut down. The half-track is destroyed but a rifle and bazooka team make fierce repeated counterattacks, and despite the riflemen falling the fallschirmjager are pushed back. This left no German units within 8" of the objective so the Armoured infantry secure the win.

7-2 to the US as the remaining half-track fled before the US victory condition took effect on my turn. 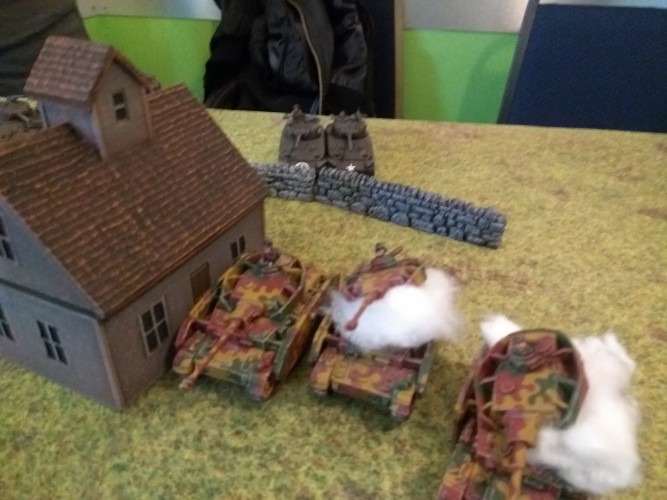 The Sherman HQ pull off a daring move and bag another Panzer IV in the German rear. 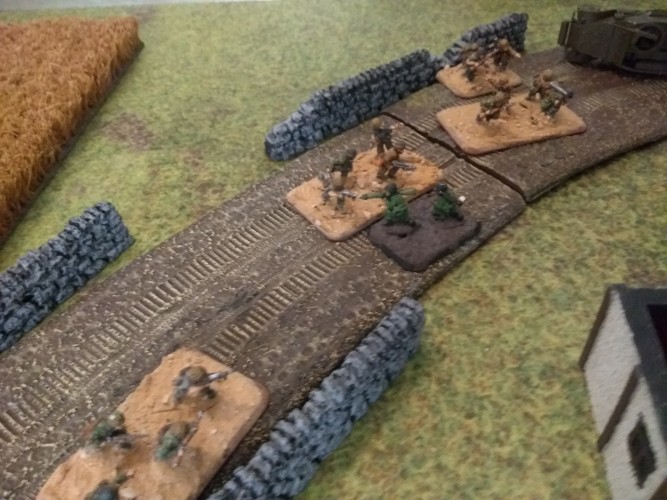 The fallschirmjager attack the objective but do not expect the guts of the Armoured riflemen who sally out and give them a bloody nose. With their Panzer forced picked apart behind them the Germans lose the will to fight.

1 Person Has Recommended LucasHW For a Commendation