This is a report from the central sector of a 5 player game hosted by Glasgow games club. For the British right sector and an overview of the scenario and mission I point to Mark N's excellent report "A LONG DAY". Here I cover the advance of 2nd Armoured Division in the battle's centre, my front objective (if held resulting in a draw) was in a bombed out church almost at the table centre and my back objective was the clock tower in the town which occupied the centre and right rear of the battlefield. Holding both objectives would result in an allied win for my sector. 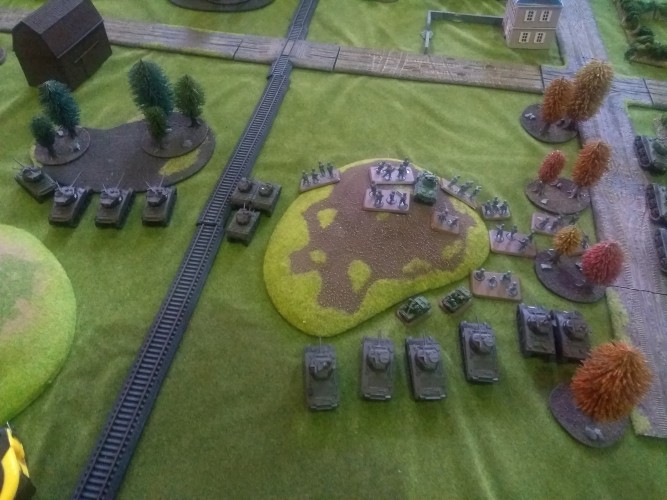 Veteran 2nd Armoured ready to move out, supported by trained 105s from 3rd Armoured (My own 105s were further right).

The Germans had decided to only lightly defend the central belt of objectives, looking to kill us in the back field then push back to the centre and reclaim them in a counterattack. As a result my airborne quickly move up and capture the church objective. US Stuarts rapidly advance to deny 88s an ambushing spot while my 105s knock out a mortar unit dug in in the town square.

It wasn't all joy however as the paras were struck with a tremendous bombardment from Wespes and StuHs which killed both bazookas and a couple of rifle teams. In a tight spot the fearless paras unpin and realise the only way is forwards, thanks to some smoke from my trained allies they daringly dash into the town and destroy 2 scout cars. Meanwhile my Shermans move up cautiously as artillery knock out Pak40s on the road ahead, with help from a deadeye 75mm shot from my HQ. 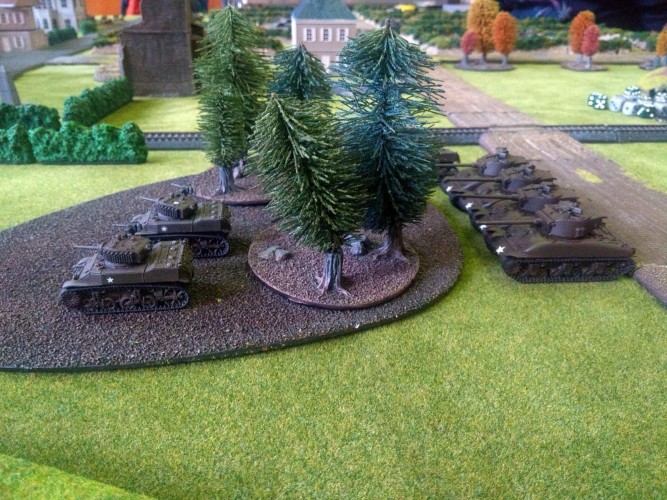 US tankers move up, careful to mind the German guns in front of them as the 105s and my ally's priests go to work. 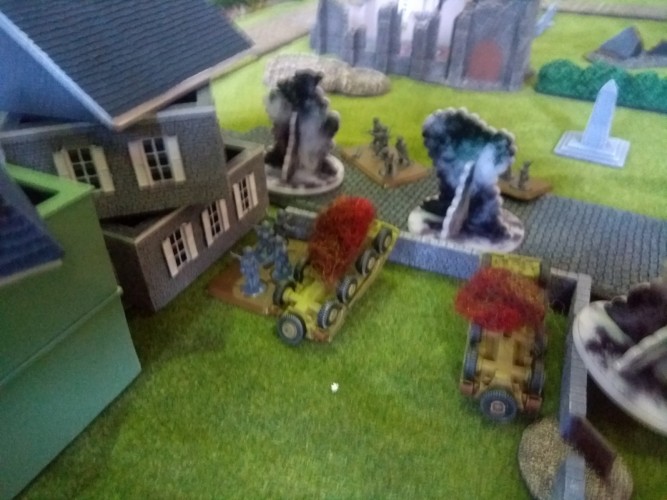 The paras charge in and destroy scout cars, even without their bazooka teams. 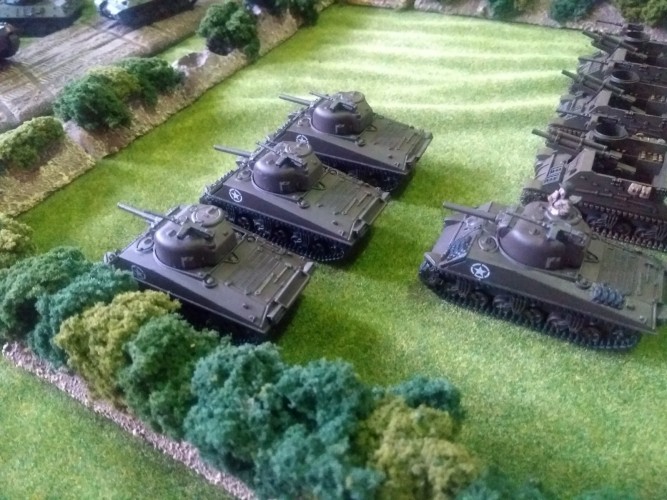 Allied artillery set to work and wipe out a Pak40 unit, but they remain aware they'll be needed to deal with ambushing German guns.

Despite their success the paras were now right up to the enemy line and unsupported, a hail of MG fire from panzergrenadiers pins the US jumpmen and a following assault sees them wiped out in return for a panzershreck team. In a vineyard (In Normandy?! Yes we know) 4 more Pak40s ambush and promptly annihilate my US ally's 4 75mm Shermans in a single volley, allied artillery had a new target.

Panzers started to arrive from reserve as my 76s completely failed to hit the StuHs to my left, who had cleverly gone to ground since blasting the paras. Cheers go up as to my right the Churchills find some success against panzer IVs and have taken their centre objective. Two 8.8cm FlaKs ambush to try and hold back the Churchills but bombardment from my 105s keeps them pinned and eventually routs the unit. 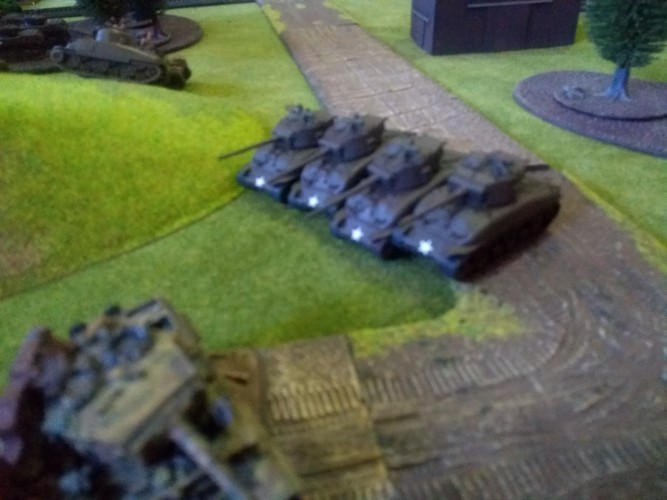 76s manoeuvre to fire on StuHs to support my ally to the left but no luck. 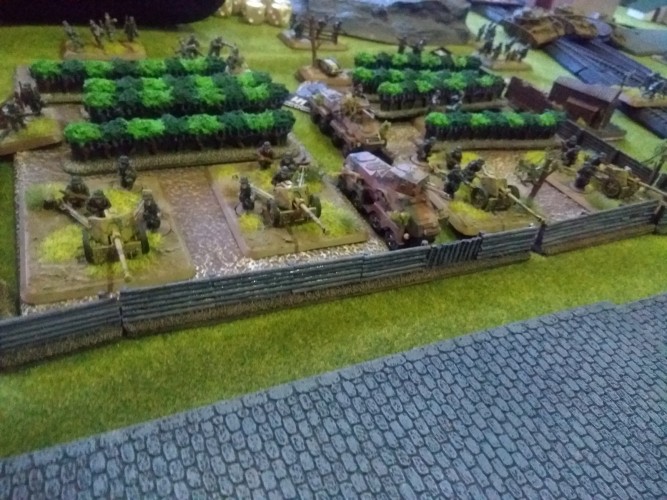 Pak40s appear! These guns quickly wiped out a unit of 75mm M4s then bullied my Stuarts, who should have perhaps driven up to prevent the ambush, despite the pumas. 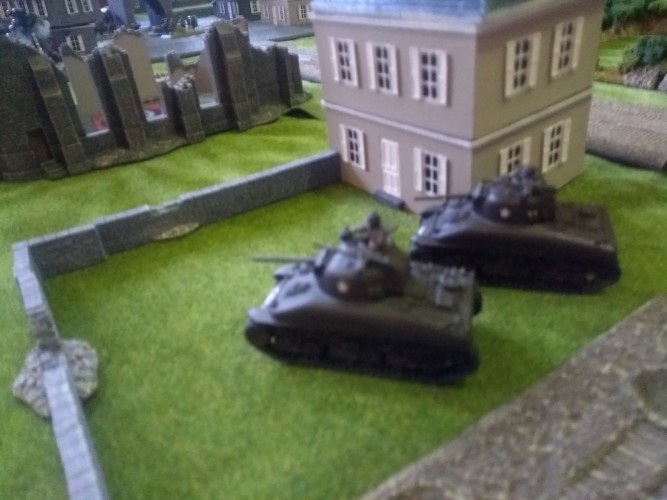 Having destroyed an AT gun directly my HQ is happy to direct shells onto the enemy and cover the captured church objective.

A dreaded sound was heard next, the grumble of not one Tiger's engine but three. To the surprise of the Allied commanders they appeared in front of my trained US comrades rather than against the British heavies. With the help of the StuHs and PzIV HQ who had arrived with them they take apart my ally's tanks with a blistering first round of shooting from which my comrade would never recover as Paks saw off an M10 and his 76s perished.

The Pak40s in the vineyard seemed to be invincible, surviving every impact which came their way despite 3 units bombarding them for 3 turns! (My ally's dice were horrendous for firepower this day). This allows the Paks to bag my 1IC but my 76s are unbowed, destroying 2 StuHs on the move and causing the third to flee and dodging all return fire thanks to the cover of dead US tanks. 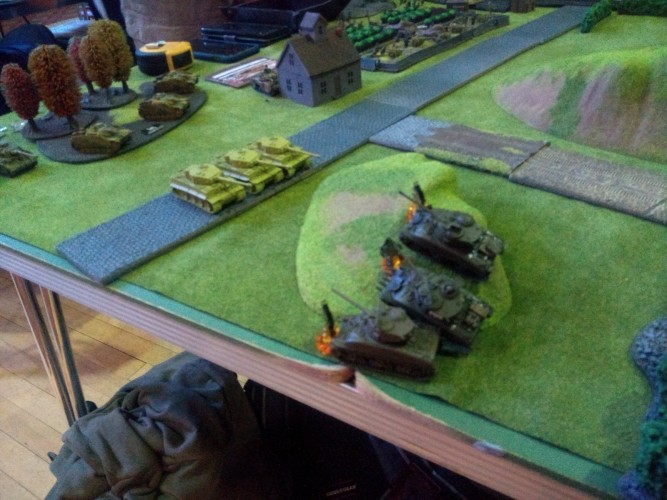 Tigers and Panzers brutalise my ally despite firing on the move with a failed blitz, as the left flank collapsed my efforts to take my rear objective had to be greatly reduced. 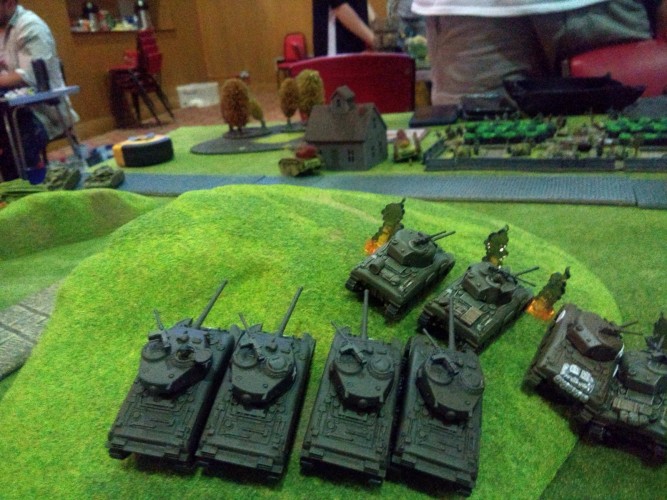 It's not all doom and gloom (for me at least) as 76s knock out the StuHs, those pesky Paks are still up however.

There is great frustration for the Allies as Tigers tear through the US on the left and the Churchills on the right struggle to claim kills against panzers and StuGs on the right. With my rear objective in mind the 105mm Shermans and my 2IC roll out to attack the town, as panzergrenadiers charge out and are cut down by British Shermans, tally ho!

On the left my 76s attempt to salvage the flank for my ally, they deftly move to flank the Tigers, 8 shots go in with 3 hits, a bounce (thanks to my opponent's 'lucky', an equal and a penetration, just two 3+ firepowers would mean a dead and bailed Tiger! Alas, true to allied form this day I fail both and the Tigers almost mockingly remount and destroy my tanks, along with the nigh on invincible Pak40s who had still only lost a single gun to turn after turn of shelling. 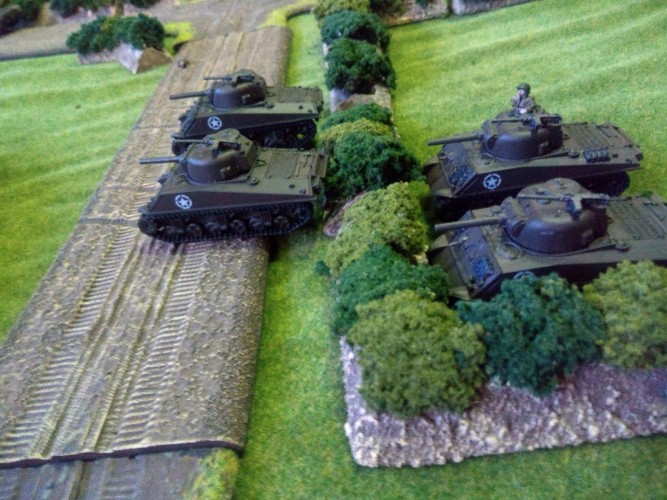 105s roll out, they needed to pressure my back objective for the allies to have a hope of winning one of the 3 sectors. 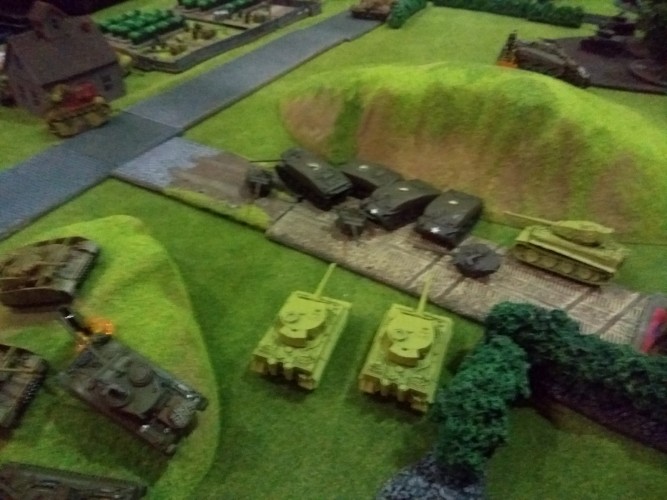 The 76s perish and the left flank is lost, firepower once again proves my bane (maybe should've saved lucky but I used it to kill an 88 earlier).

The left sector was lost and the right had bogged down as panzers and Churchills struggled to destroy one another. However, just two panzer IVs held my rear objective, if my 105s and 75mm HQ tank could see them off the allies would have some good news for the higher ups!

My Stuarts, who had lost a duel with Pumas were overrun by the now confident grenadiers on the left, hoping to retake the church. It was not to be for the Germans however as my ally used his last efforts to pin them down. In the town my tanks failed to damage the panzers on the move but survived return fire, they were now contesting the objective but had to destroy both panzer IVs this turn as night fell. Unfortunately the 105mm howitzers and my HQ's 75mm simply couldn't complete the job and the central sector was a hard fought draw.

3-3 Draw by normal scoring, a bitter fight with some terrible luck for my Allies, the right sector was also a draw as Churchills couldn't wipe out panzers and StuGs in time to tackle the panzergrenadiers and the left was completely dominated by the Tigers. Great game and a great day! We'll get the Germans next time. 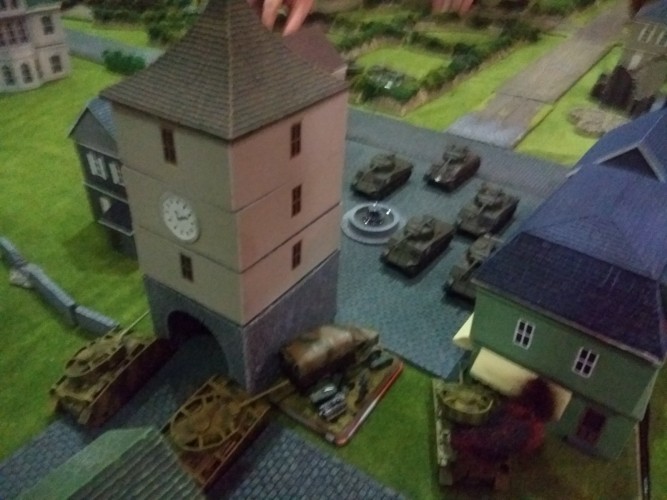 These two panzers proved too much for my assault guns in the end and despite contesting I couldn't quite claim the rear objective for the win.