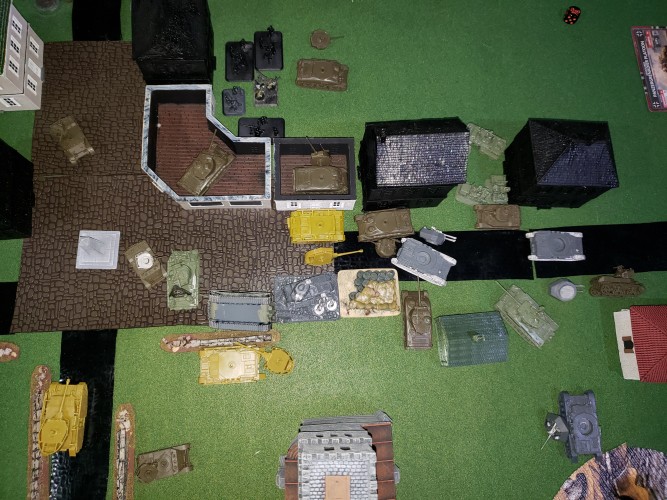 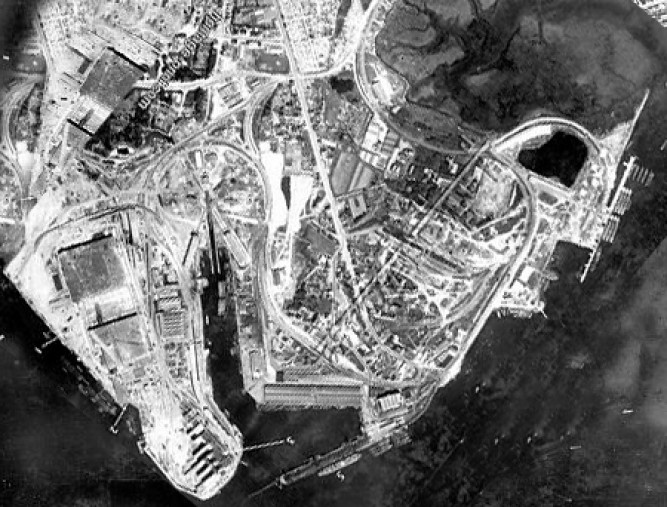 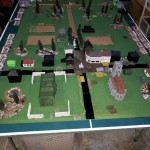 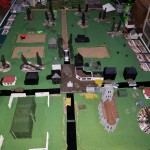 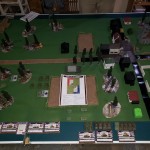 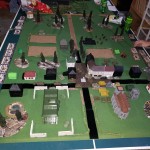 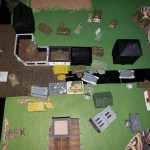 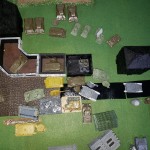 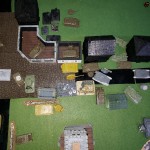 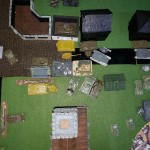 Bradley Plan.
Hit the town and break their defense, this will be a major victory in protecting the Atlantic shipping routes!

we rolled into town with the scout units, the M8 and the Stuarts. we found the trap laid for us with a Tiger company and a PanzerGrenadier company.
we exchanged a few rounds with the tigers to no effect. Jim's crew had to bail as they took a hard hit.
The Stuarts just bounced off that damn tiger Armor!

after receiving very heavy fire and getting backed up by them wonderful 76's we started putting fear into the Germans. our scouts and light tanks started focus on the buildings and the Panzers while the 76's began battling it out with the Tigers.

we lot Harry's team as they could not escape their 76, I got word the 75's started working around the back of the village to hit them from behind. they took heavy AT fire from the houses.

(after implementing a house rule that a med to heavy tank can role over legally tabled vehicles wit a cross check).

The 75's rolled into the side challenging the 10.5 arty and also coming in the back of the tanks. sandwiched in between our tanks they began to loose their tanks to our volume of fire! Our scout units kept fire on the houses and on party of the 10.5 battery.

some German scout elements were found hiding in the woods, they made a failed attempt to access the rear units.

we finished off their tanks, 1 Tiger tank commander escaped through the scrap pile of destroyed German armor.

We wiped out their arty and began working on the dug in infantry. many many many rounds into the houses but little affect to the dug in infantry.
(this led to a discussion about Tanks VS houses. we could not find any rules to this so it led to another house rule. Medium and Heavy tanks make a cross check, if successful they enter a standing house. If this house is occupied by enemy forces, the infantry make a moral check to stay in house. Failure requires evacuation up to 2" from house. Success means they stay and we then go to tank assault rules)

the 76 crashed through the walls of one house causing the Germans to flee and they were then subject to the large amounts of machine guns awaiting them.

the 2nd house proved to be more of a challenge, 1 tank was destroyed and another had difficulty getting through. finally success! and the last two units escaped in the clouds of dust and through the fog of war.

it was a crawl but eventually the mighty US armor destroyed two German companies!

Drinks for the house!