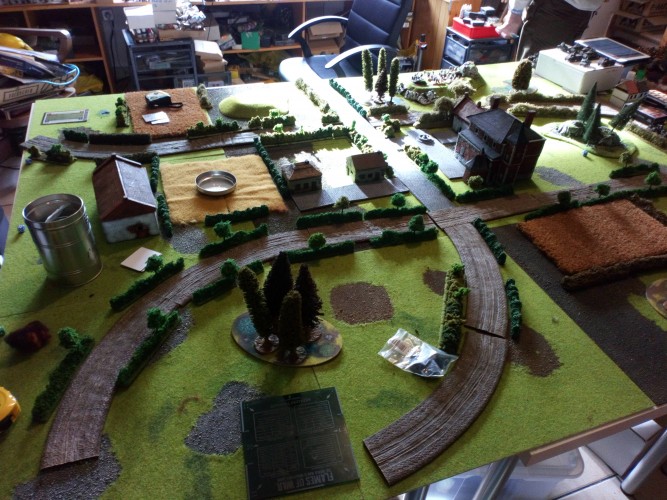 MORTAIN AT DAWN. As you can see in thee picture there are some buildings and a lot of concealment.

US LEFT FLANK OBJECTIVE. In order to protect this objective I placed one of my infantry platoon, the artillery battery dispersed to avoid the enemy artillery battery and the Sherman platoon in a central position to reaction against the enemy main effort. 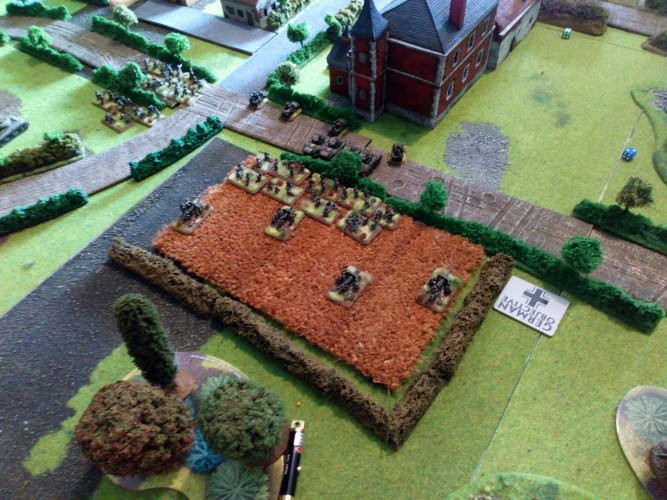 US RIGHT FLANK OBJECTIVE. I placed my AT guns, my recon platoon tried to take advantage in the house but was blocked for the enemy recon units. The infantry platoons took positions to advance in the building areas with the Stuarts support. 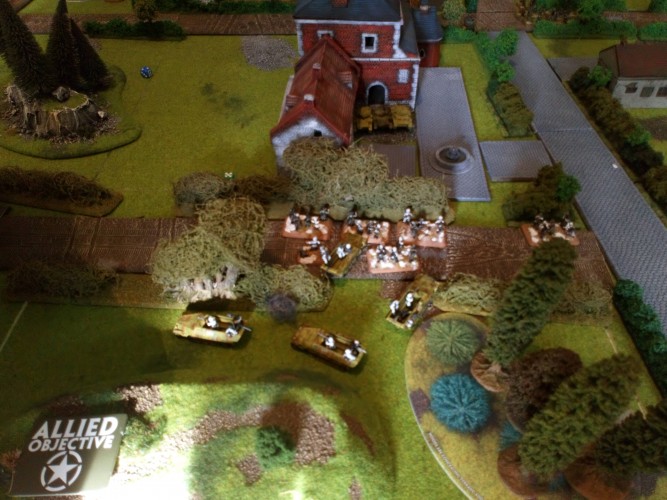 GERMAN LEFT FLANK OBJECTIVE. He used his recon platoon to take with one infantry unit the big house in a dare move. He placed the other infantry platoon protecting the objective. 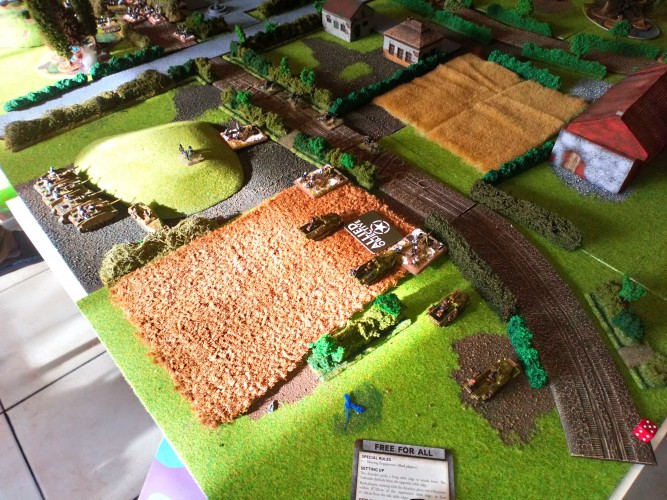 GERMAN RIGHT FLANK OBJECTIVE. He placed 1 AT platoon and their machine guns platoons to protect the objective. The panzers were placed in the right flank with the mortar platoon. The stug remained concealed by the hill. 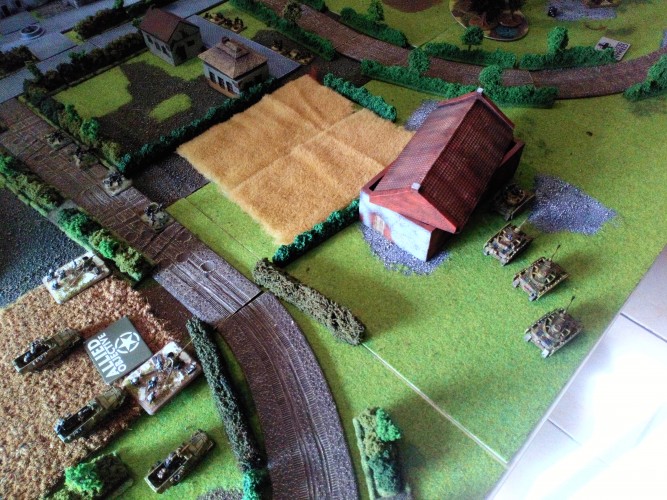 GERMAN FIRST TURN. He advanced with the panzer platoon against my artillery position and got two casualties. He shot with his AT gun and got 1 Sherman bailed out. In the building area he consolidated his positions advancing and firing.

GERMAN SECOND TURN. He fired with all his machine guns and mortars to my infantry advance in the center. They eliminated me 3 teams and let me pinned down. He moved his panzers and stugs to fire my Shermans he got one bailed out. The platoon in the big house remained pinned down. 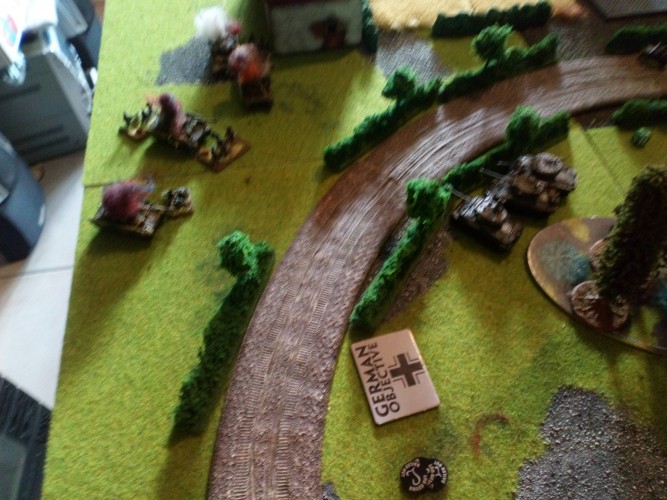 AMERICAN SECOND TURN. I moved my Shermans to fire the panzers and prepare the assault in the building area. I got 1 panzer destroyed by my bazooka, and 3 panzers bailed out with my Shermans, so I assaulted with my Para platoon using gammon boms and I destroyed the panzer platoon. 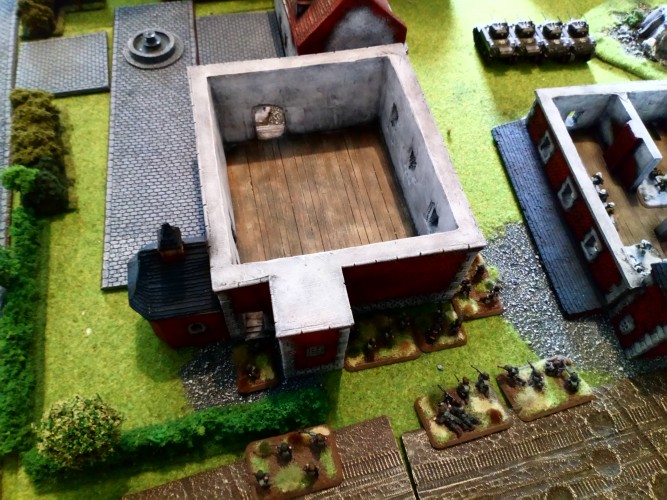 AMERICAN SECOND TURN 2. I assaulted the German platoon in the house and I got the house. They withdrew to the next house. 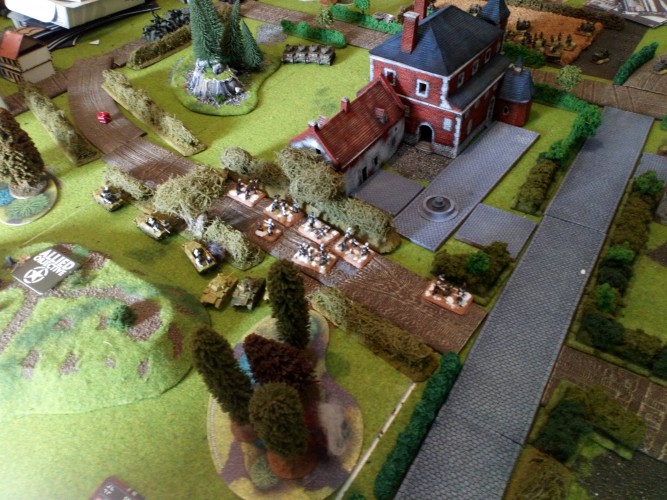 AMERICAN THIRD TURN. I moved my Stuarts in the right flank and my infantry consolidated the building. My artillery fired the infantry platoon getting 2 casualties. 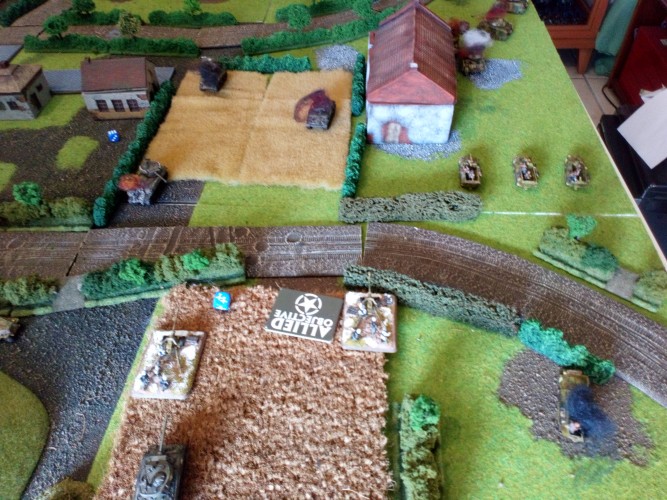 GERMAN AND US FOURTH TURN. He destroyed me my para platoon with the fire of the mortar vehicles, this vehicles advanced toward my objective. He destroyed me with the stugs and AT guns 3/4 of my Shermans. But my Sherman wanted to fight and enveloped the enemy firing to the guns but it forgot assaulting so I think that in this moment I could win the game. 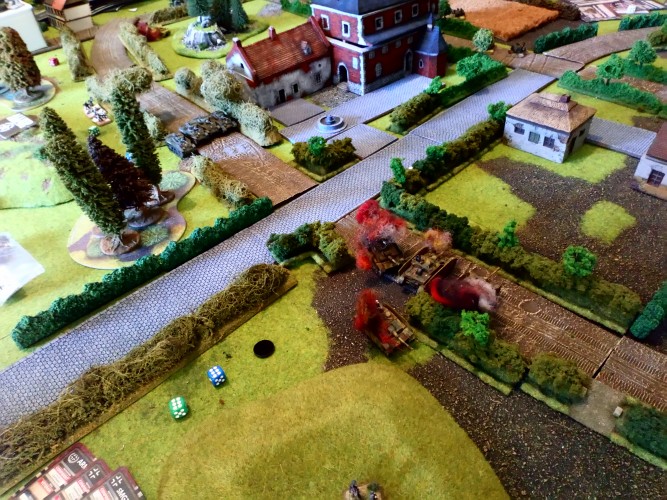 GERMAN AND US FIFTH TURN. He fired with him his stugs and guns to my Sherman and eliminated him. I fired his stug in the flank with my Stuarts and AT guns, and I destroyed them. Also I assaulted the infantry in the building and got the German platoon eliminated. The artillery battery got 1 German casualty more in the other infantry platoon, they didn't pass the last stand and flew. 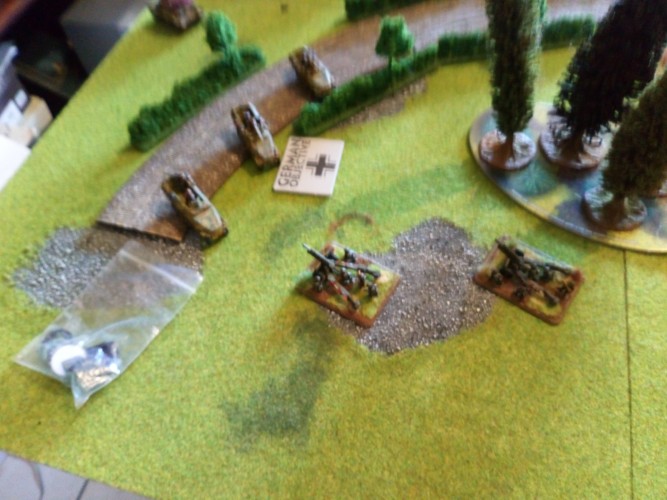 SIXTH TURN. Hitler used his secret weapons and advanced with his mortar vehicles. They fired their machine guns, 9 shoots 3+ and got 6 hits, I rolled and I didn't save, he rolled FP and got three 6. My face.... Hitler won so he invaded America and created the American Third Reich, and the man in the high castle is sending films. 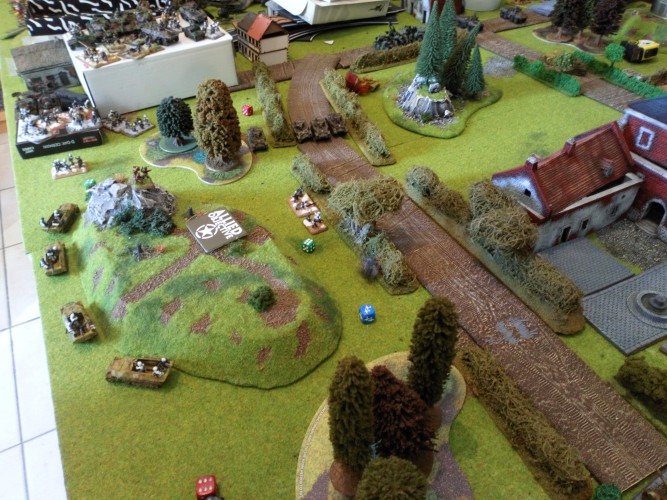 To sum up. One turn more and I had got his objectives. I didn't think that the mortar vehicles were a problem and I paid the price. About the terrain I think that this table would look better with a battlefront prize so give me a commendation please.