Mission:
A British Sherman & Rifle Company spearhead has broken through the enemy lines within striking distance of Rouen. They are now tasked to capture a town complex from an Axis Grenadier company on the outskirts of Rouen to secure the passage to the city.

Battle Plan:
With the town crawling with Grenadiers, the British commander decided that entering the town with his Shermans would not be advisable, and would focus his efforts on taking and holding the wooded area to the south. While still hard to spot, the unfortunate Grenadiers assigned to hold the woods would not benefit from Bulletproof Cover of their comrades in the town unless they were properly Dug In. The plan was therefore to have the Sherman company establish a firebase outside the woods, and for the Rifle Company to lead an assault on the Grenadier platoon in the woods before the Axis reinforcements arrive and/or to hold them off long enough to establish a foothold. 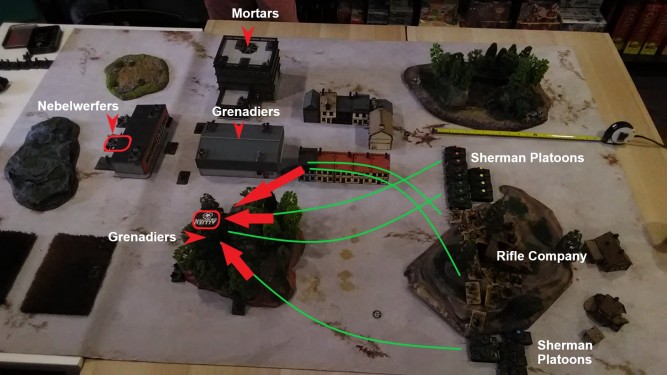 Battle Plan: To Capture the Woods to the South 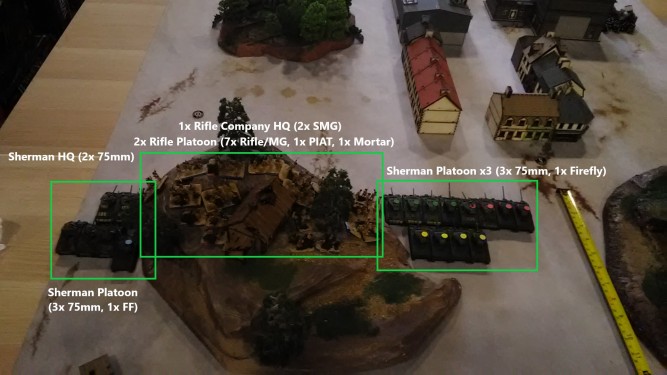 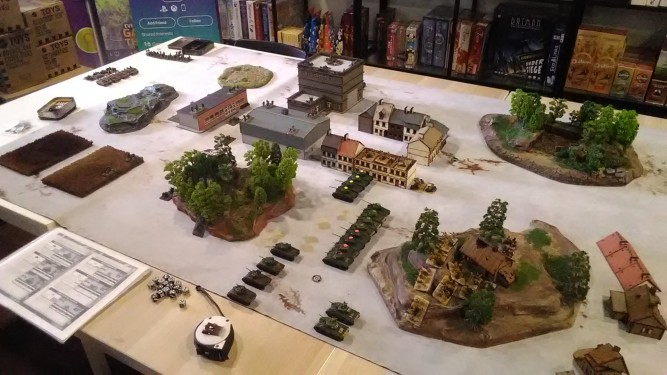 The Shermans form a line abreast to maintain as much covering fire as possible while the Rifle platoons make their way to spring their assault under the cover of a row of houses lining the woods and to cover the flanks of their armoured counterparts. 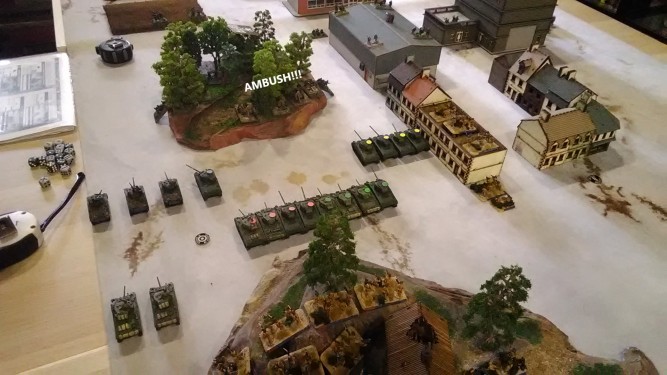 The advance would proceed swimmingly if not for some faulty intelligence; the Grenadier platoon in the woods had been reinforced by a platoon of PaK40 the night before. 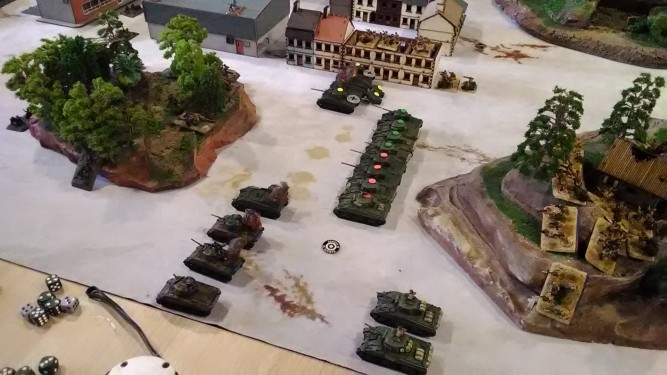 The AT guns let loose at close range, obliterating a trio of Shermans instantly. Mortar and artillery fire begin raining down on their grid square as well, the Axis forces had the field in front of the woods Ranged In as well. 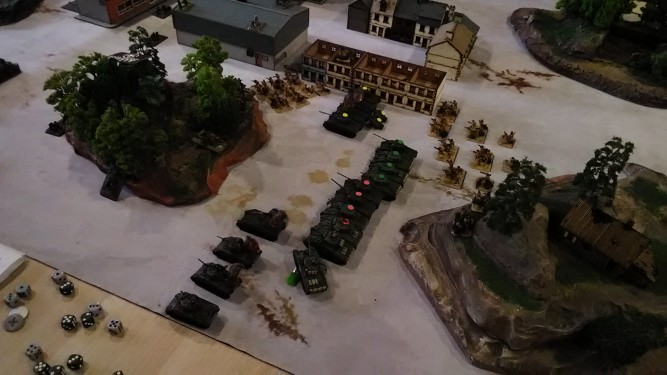 Too late to turn back, the Sherman commander orders all fire to be directed on the AT guns, and signals the infantry to muster a hasty assault on the woods before ensuring all threats to the infantry were dealt with. 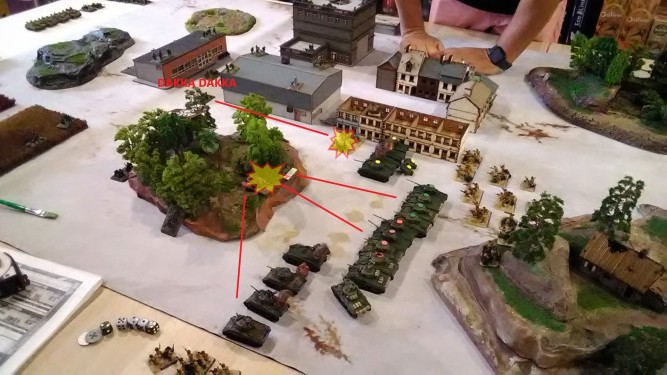 The assaulting Rifle platoon blunders into the crossfire of a HMG position from the rear Grenadier platoon. Taking heavy losses, the Rifle platoon retreats to the relative safety of the town buildings. Safe from small arms fire at least, for the artillery still hounded them constantly. 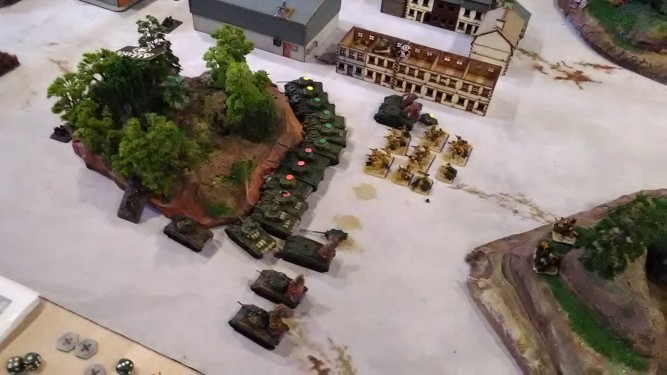 In a bid to avenge his comrades, the Sherman commander orders a risky armoured assault into the woods unsupported. Remarkably, only one Sherman was lost to enemy action, while two other Shermans got themselves stuck on the edge of the woods. 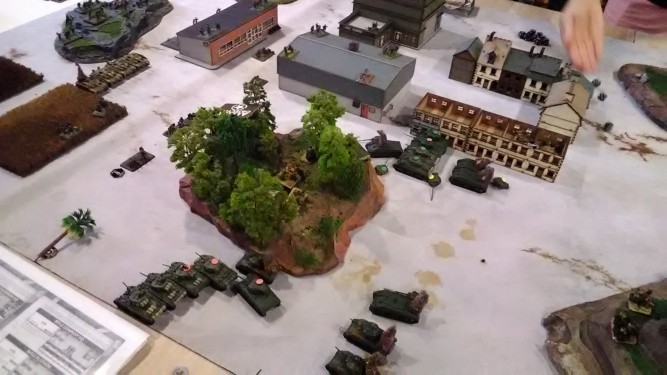 The Pak40s are silenced, and the Grenadiers beat a retreat to secondary foxholes on the edge of the woods as the second Rifle platoon advances into the forward entrenchments. 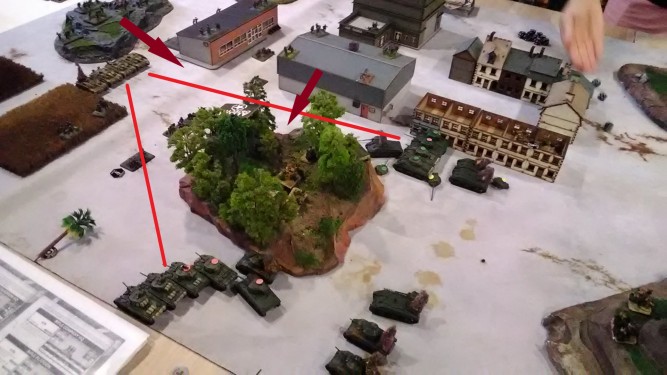 The Axis reserves arrive in the form of a StuG platoon, and the Fireflies immediately move to firing position. Bolstered by the arrival of their assault guns, the Grenadiers from the town move to attempt to retake the woods. Grenadiers pour in from the town, and an intense firefight breaks out in the woods as the Shermans are kept busy dealing with the StuGs. 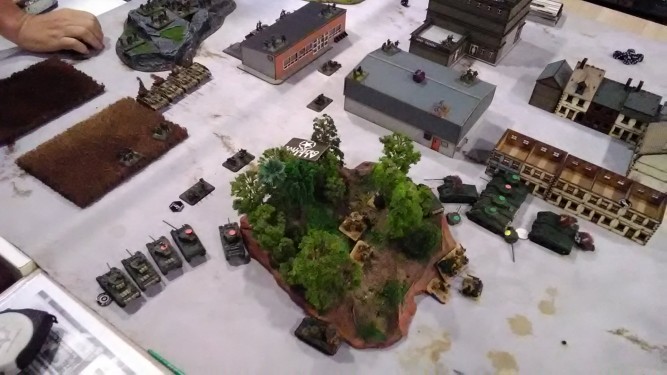 The Sherman commander, noting astutely that the StuGs were a rallying point for the Grenadiers (after all, he noted arrogantly, which infantryman would not be uplifted by their armoured counterparts?), orders all fire to be directed at the StuGs despite the threat of the nearby Grenadiers. 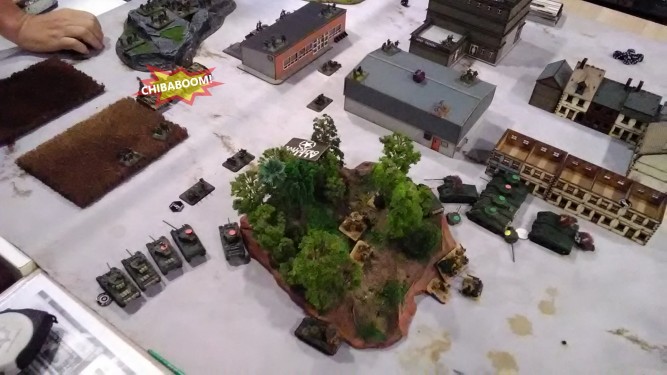 The StuGs are eventually silenced, at the cost of yet more Shermans. The Sherman commander was right, however; this indeed had a dampening effect on the advancing Grenadiers. 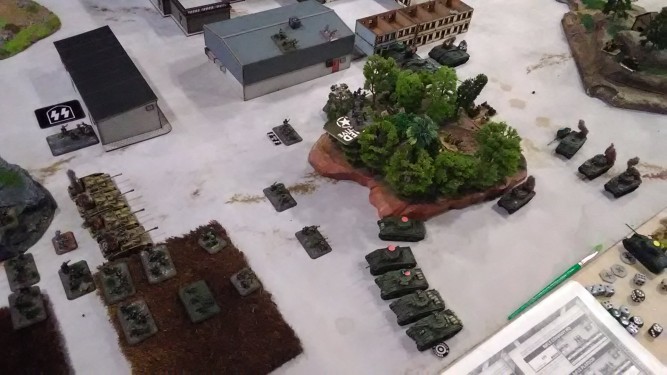 Exhausted, and low on men and materiel, both sides call a truce to evacuate their wounded, and to request yet more meat for the grinder.