A Sherman Company races to link up with friendly forces but encounters a formidable blocking force in the form of a Panther company. They attempt to move to break through the lines before the Axis forces can properly regroup and surround them.

Turn 1:
The Sherman platoons are ordered to engage in flanking maneuvers on the Panthers while the infantry would make best speed down the road in their trucks to link up with friendly forces.

Turn 2:
The Shermans engage in CQB with the Panthers located within the town premises, and are slowly whittled down, but they buy enough time for the infantry to reach the breakthrough coordinates. Nevertheless, they still have a hard fight ahead of them as the road is blocked by a Grenadier-held house and StuH battery. The Rifle Platoons hunker down to await reinforcements and engage targets of opportunity within the Grenadier-held building.

Turn 3:
Reinforcements arrive in the form of Shermans and a combined infantry and tank assault destroys the StuH battery. However, this is not before the Sherman platoons within the town are destroyed by the Panthers.

Turn 4:
The newly arrived Shermans and Rifle platoons are engaged by the surviving Panthers at objective North, while fighting continues to rage within the Grenadier-held house.

Turn 5:
The Grenadiers prevail over Objective Centre, as Rifle Platoon B retreats from the field due to heavy casualties, while the forces at Objective North continue to lose yet more men and tanks.

Turn 6:
In a final flanking and assault maneuver by the Shermans and remaining Rifle platoon the Allied forces manage to destroy the remaining Panthers to secure a breakthrough at Coutances.

Iron Sherman: The Troopers break through a Panther Company 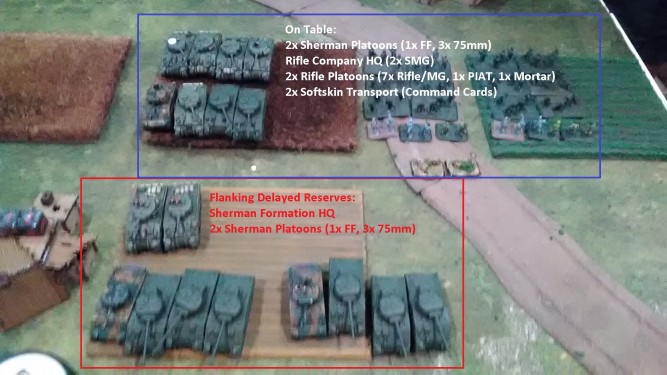 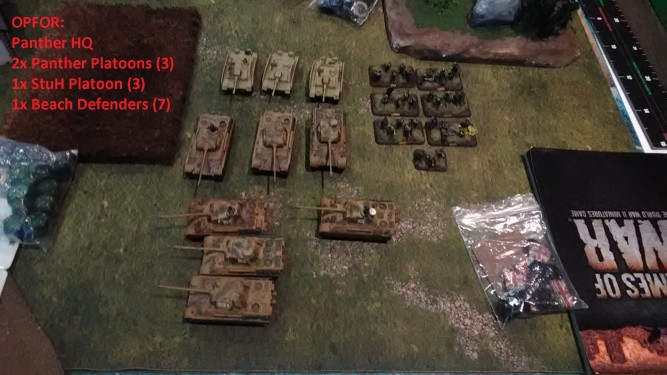 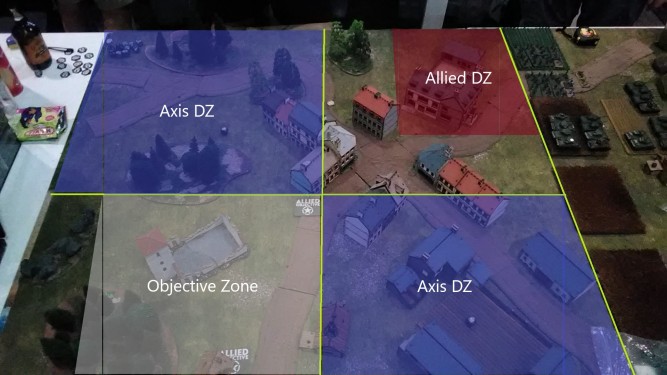 On this battlefield no one wins: Note the bottom 6" are cropped out. The lower objective is not exactly at the bottom edge. 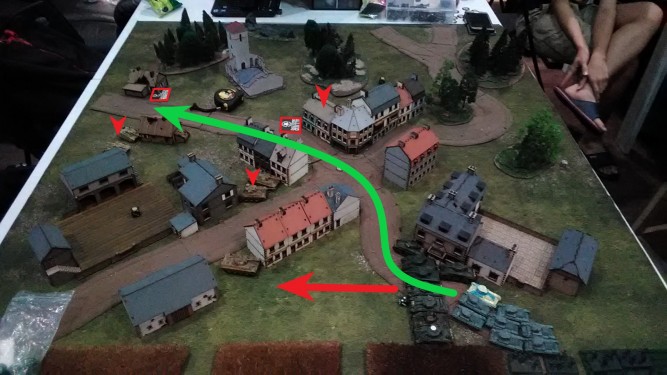 The bugle sounds as the charge begins: Sherman Platoons A & B are ordered to seek, flank, and destroy the Panther Platoon, while the Rifle Company in their softskins (Valentine's are proxies) makes best speed down the road to link up with friendly forces. 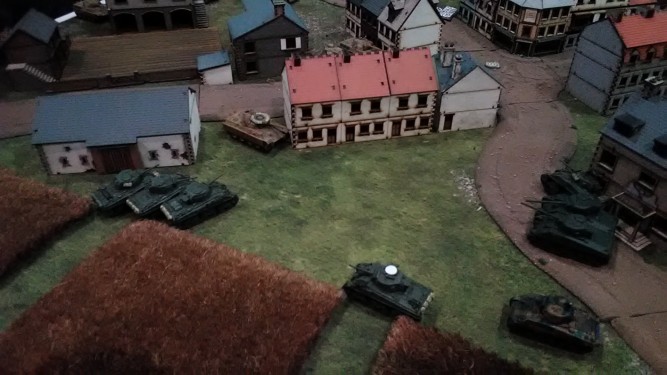 The platoons' Fireflies remain stationary to fire on the first Panther contacted. Shermans from Platoon A move to flank the Panther. Horrid shooting resulting in one Bail result on the lead Panther. 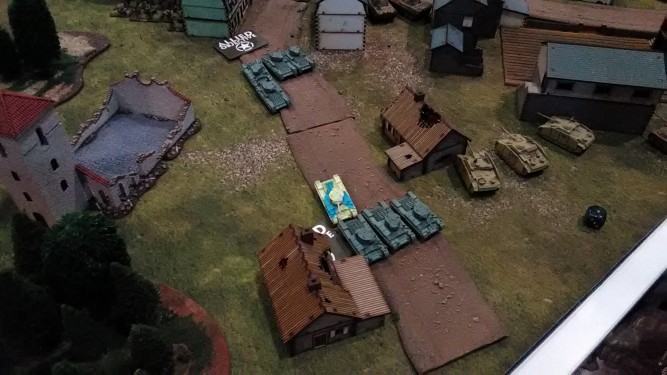 Meanwhile, the Rifle Platoons rumble down the road amid the smell of acrid smoke and truck exhaust as they plunge into certain death. 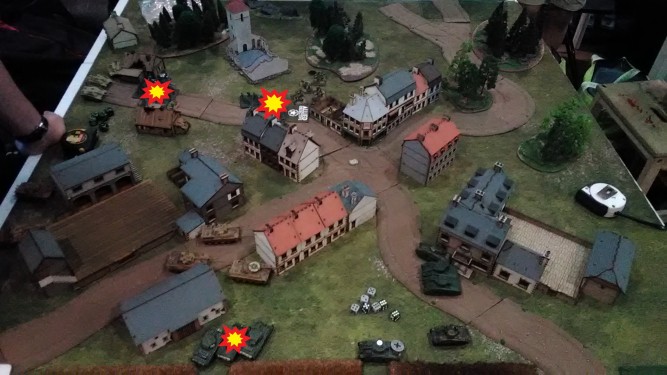 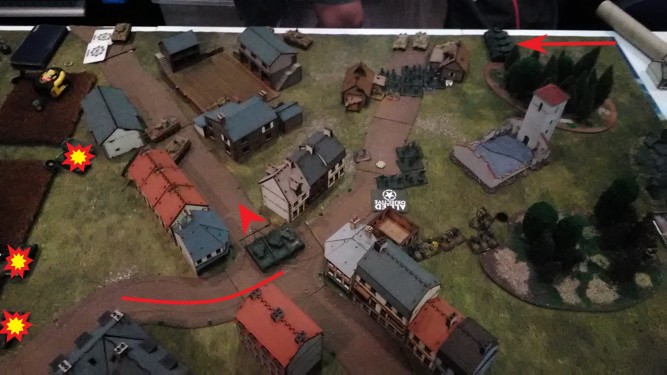 Screams of pain as Sherman Platoon A falls, but Platoon B hurdles their wrecks to move to flank. Platoon C gets close enough to fight when they enter from Reserves 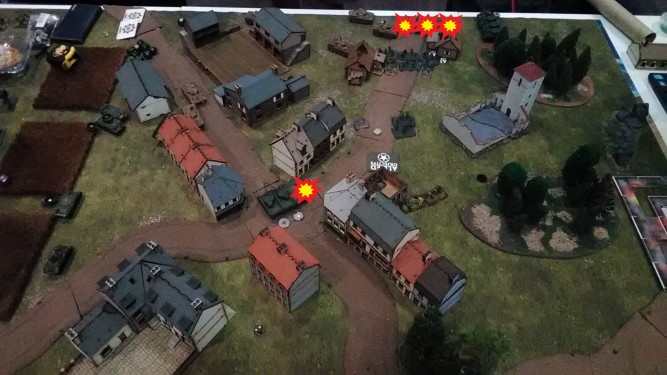 But as the Panthers fire another round, they get so near yet so far away, Platoon B (Center) won't live to fight another day. Meanwhile, a combined arms assault from Platoon C (Top) and Rifle Platoon B results in the destruction of the StuH platoon. They'll take our lives but we'll take theirs too. 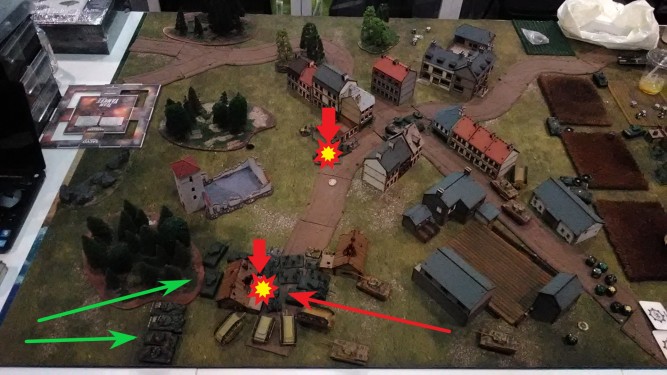 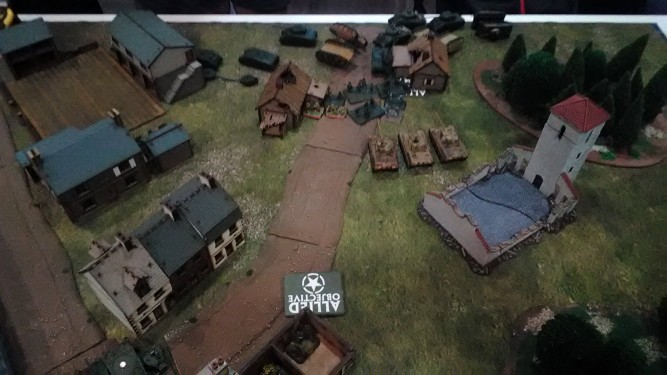 Rifle Platoon A (Objective Centre) is lost as they sweat with fear and break to run, and the Germans gets Objective North in their sights. The Panthers pull the trigger and we feel the blow. A burst of rounds takes more Shermans below. 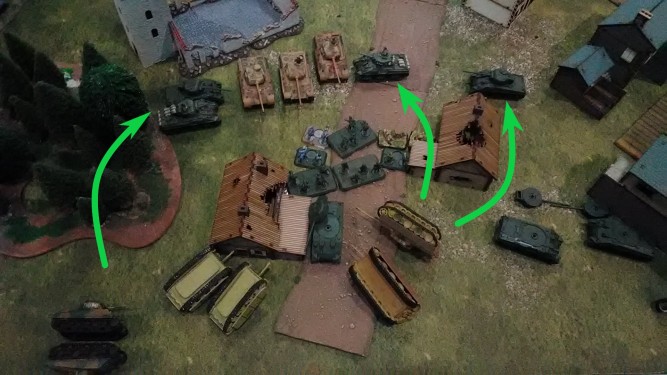 They'll fire their cannons but we'll run them through: The Shermans regroup in one final flanking maneuver while Rifle platoon B digs in to wait for the next attack. They'd better stand there's no turning back. 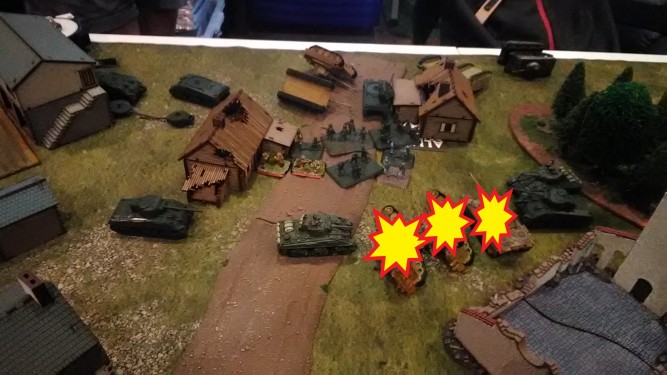 Without a tear the Panthers draw their parting groans: The combined arms assault from the flanking Shermans and assaulting infantry lay low the remaining Panthers to secure victory.