Ambush in the Bocage

Captain Vandenberg looked at the intelligence report in shock and disgust. “What do you mean, ‘we have no idea of the enemy’s strength’?”
“Well, sir, our reconnaissance hasn’t been able to locate any enemy forces for the past day or two,” the representative of the recon platoon said.
Captain Vandenberg sighed, then left the tent to muster his company to advance. What a way to go to war: blind as a bat.

For this week’s smackdown, I decided to go with an old favorite of mine, Veteran Armored Rifles. The list was built around 2 full strength ARPs, with plenty of artillery and tank support, and was as follows:
HQ
Full ARP
Full ARP
3 M8 Scotts
4 M4 Shermans with hedge cutters and tank telephones
4 M10s with hedge cutters and Desert Veterans
Cavalry Recon
3 M7 Priests
AOP
Lucky command card

Meanwhile, my opponent (who also runs the store, Creative Pursuit Games in Leesburg, VA, and is an all-around great guy) went all in on German heavy armor, creating the following list:
2 HQ Panzer IVs
3 Panzer IVs
5 Panthers
Full Panzergren Platoon
The table was a 4×4 bocage hellhole, with cover and cross checks as far as the eye could see.

Since the axis was the defender, 40% of their army had to be held off table, which equaled out to be everything that wasn’t a Panther. Then, because the Panthers were all one platoon, they all went into ambush, leaving the axis with no starting deployment. I had my work cut out for me.
My deployment was designed to get my troops across the table as quickly as possible, to get into the Panthers’ faces before reinforcements could arrive.

Turn 1 saw the American vehicles shoot forward, with one ARP going up the road while the other approached the minefields on foot with TD support. Meanwhile, the recon and Shermans made a flanking maneuver to threaten the rear objective.

The German Turn 1 saw the Panthers emerge from ambush near the barn and obliterate an M10 (not bad luck for the M10s, considering the amount of shots headed their way).

In response, in the American turn 2, the Scotts, aided by the timely arrival of the AOP, lay down a smoke barrage in front of the Panthers, blocking their view of the M10s and dismounted ARP. The Shermans, taking full advantage of the 2+ cross checks from their hedgerow cutters, get a volley of flanking shots into the Panthers and are rewarded with 2 kills and a bail. The second ARP dismounts and moves towards the barn objective, creating a khaki tide of American infantry bearing down on the objective.

The German retribution is swift in their second turn. The bailed Panther fails to remount, but its compatriots eviscerate the Shermans, killing 2 and bailing a third. The Shermans would go on to fail their platoon morale check next turn. However, the Americans come back swinging, with the ARPs clearing most of the mines and contesting the objective while the M10s finish off the bailed Panther. The AOP continues to frustrate the German gunners, this time calling down a smoke bombardment from the Priests.

Faced with a mob of Americans on the objective, the Germans are desperate for reserves going into their turn 3. But, alas, OKW did not think the situation was as desperate as the Panther platoon commander did, and refused to release reinforcements. In a final act of desperation, the two remaining Panthers charged into the teeth of the American infantry, shooting MGs and then assaulting. The massed bazooka fire bailed a tank on the charge, then finished off the other Panther in the second round of assaulting. With no models remaining on the table, the Axis couldn’t prevent the Americans from securing the objective.

Captain Vandenberg surveyed the field full of wrecks. The Panthers were a hell of a surprise, but it was a testament to the skill of his men that they’d suffered relatively few casualties in the engagement. Based on the lack of any other German forces in the area, Vandenberg surmised that the Germans had been equally surprised that the Americans had pushed this far forwards so quickly. And, with the Panthers dealt with, the company could continue the advance.
The road to St. Lo was now in American hands, and liberation of the city would certainly follow soon after. 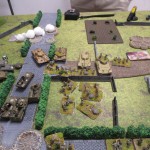 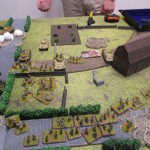 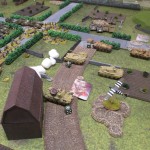 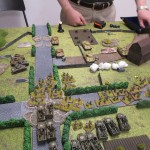 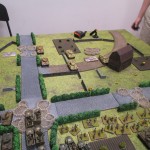 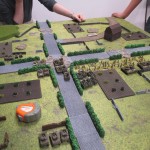 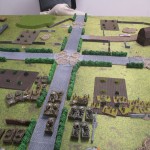 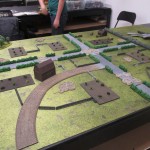 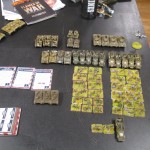 No one has recommended Nickreidsdsmt for commendation. Log in to be the first.