The word had been passed down from above: the Tigers were on the march. Their target? A small crossroads near Falaise. In response, a scratch force of American troops was assembled, named Task Force Item. Centered around a company of tank destroyers with infantry support and an air liaison officer, Task Force Item raced to reach the objective before the Germans could. There they would find a company of 5 Tigers waiting for them, a weakened yet powerful remnant of Germany’s elite Panzer arm. 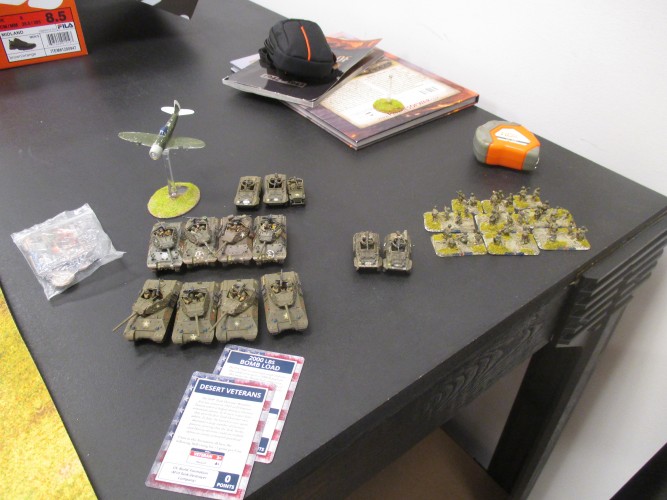 Task Force Item, made up of Desert Veteran M10s with recon, infantry, and airplane support. 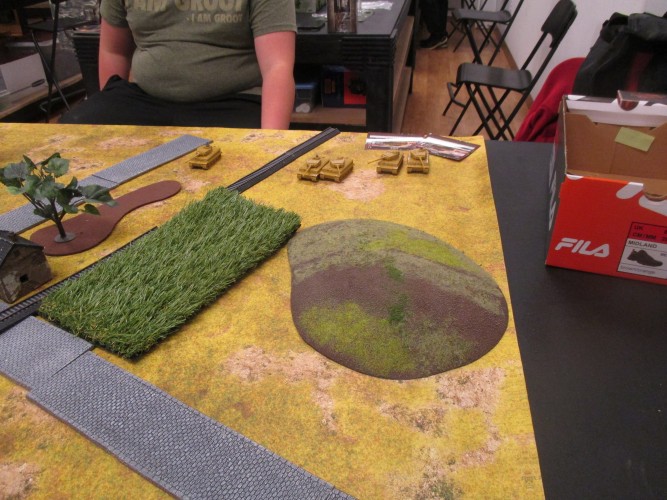 Kampfgruppe Stahl, broken up into an HQ of 1 and two platoons of 2 Tigers each.

This battle used the Annihilation mission, so the victory conditions were simple: kill the enemy. Since the battle was going to be a meeting engagement, we both set up our forces so as to avoid being shot at in the first turn. 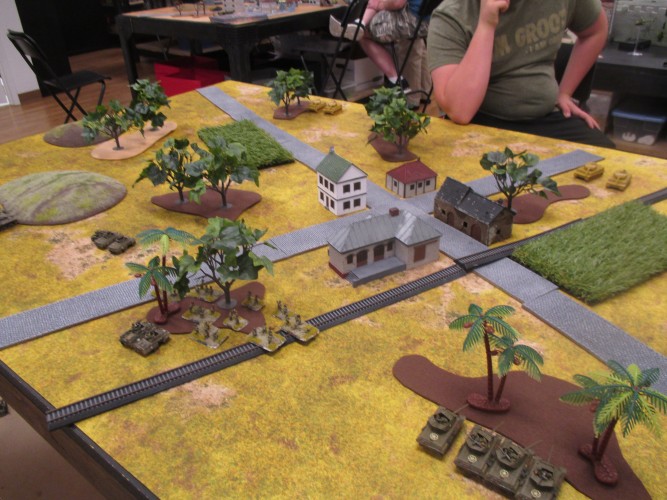 Deployment, with a platoon of Tigers and M10s on each flank, and recon and infantry in the American center.

The Germans won the roll for first turn, and proved their elite status as Tiger crews by sniping a bazooka team in their first round of shooting while generally moving slowly forward.

The Americans came roaring back as M10s on both sides of the board blitzed forward to start shooting at the Tigers. On the left, the 3" shells hit their mark, destroying a Tiger and bailing its platoon mate, while the shots on the right bounced. The infantry raced forwards to occupy the town and deny it to the Germans. The M10s then succeeded in their Shoot and Scoots. 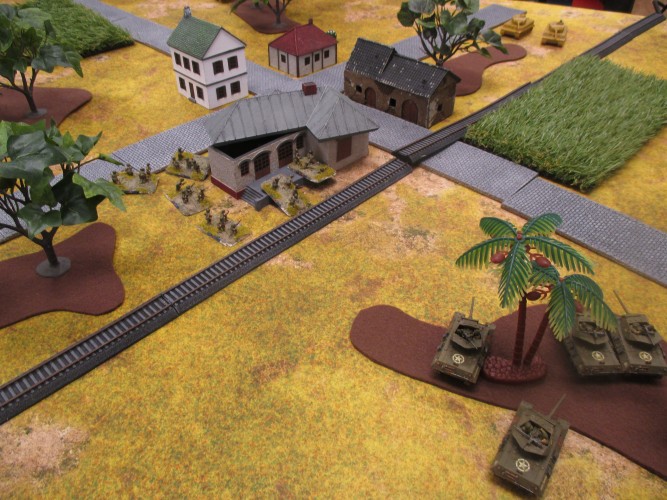 The Americans occupy the town's railway station, while M10s take up firing positions in the woods.

After the bailed Tiger remounted and passed his Last Stand, the Germans spent their second turn repositioning to face the threat from the infantry, succeeding in hitting but not killing several stands. Chastened by the M10s, they now sought to avoid being shot at by their 3" guns.

In the American Turn 2, the infantry continued to move closer to the Germans in the town, occupying buildings close enough to them to shoot and miss a bazooka shot. Meanwhile, the M10s were working their way around the flanks, fighting blitz rolls and cross checks. 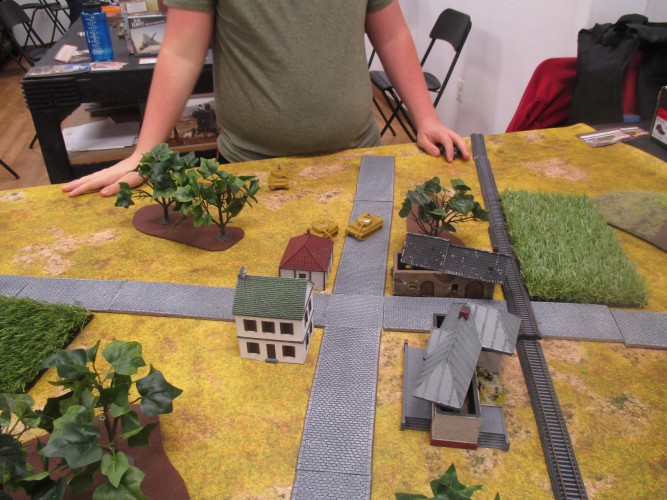 In Turn 3, the Germans pulled back from the town to begin bombarding it from range with volleys of 88mm fire, to little avail.

The Americans began Turn 3 by getting their aircraft for the first time. Seeing a mass of Tigers in the open, the planes dove in, centered the template on all 4, and then promptly failed to range in until the third attempt, hitting one (who bounced the hit anyways). Meanwhile, the right M10s had finally made it far enough around the table to begin to threaten the Tigers' flanks, while the left M10s were still mired in woods.

Seeing M10s hull down on the hill, the remaining full platoon of Tigers attempted to blitz forward to catch them unawares...then failed the blitz roll. Undeterred, they attacked anyways, missing all their shots. The other Tigers moved into the wood across from where the left M10s were standing, but also missed. 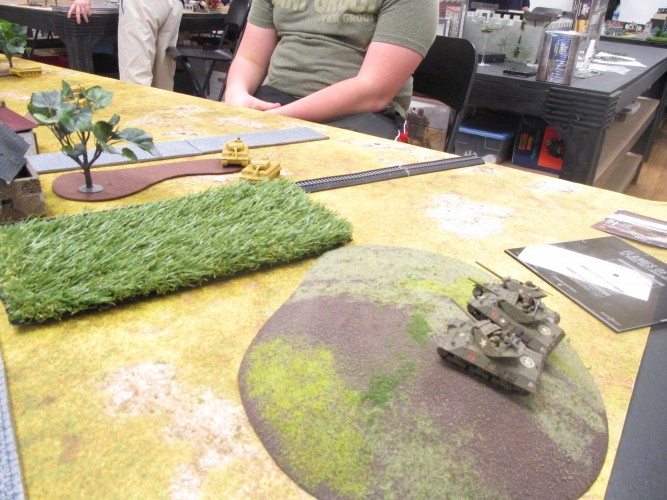 Tigers drive out to meet the flanking M10s, but fail to kill any.

After watching the Tigers fail at blitzing, the right M10s responded with a volley of their own, knocking out another Tiger. The left M10s traded fire ineffectually with the Tiger HQ and 1 tank platoon, while everyone else stayed holed up. 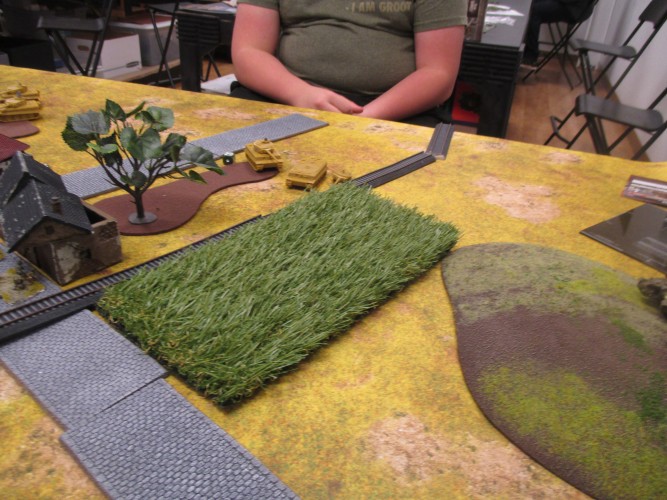 M10s destroy a Tiger, then scoot back down the hill to avoid return fire.

The remaining Tiger facing the right M10s tried to disengage...but failed his cross check. The other two remaining Tigers continued to trade fire with but still fail to kill a single M10 of the left M10s.

The Americans start their turn 5 by getting their planes for the second, and last, time. However, the pilots are unable to land a hit on the Tigers in the woods. On the right flank, the M10s blitz forward again and kill the last Tiger of the unit sent to stop them. 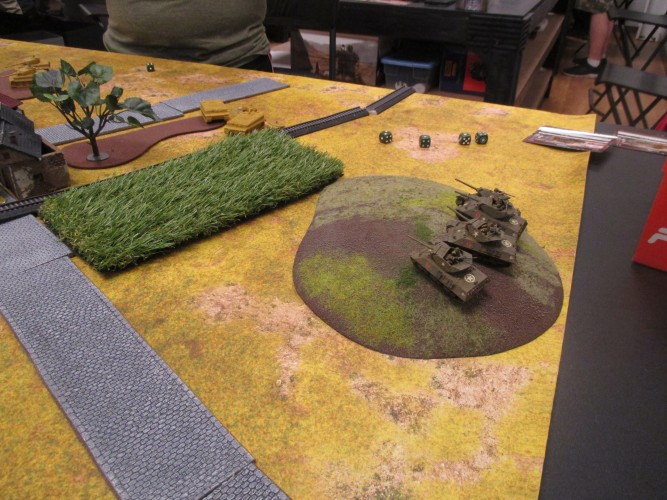 The M10s blow up another Tiger, leaving just 2 on the board.

With only two vehicles left, the Germans spend their turn 6 trying and failing to kill the left M10s.

The right flank springs into motion again for the Americans in turn 6, as both the right M10s and the infantry surge forward, with the infantry using a Follow Me order to reach assault range. After a turn of shooting fails to kill any Tigers, the riflemen charge through the defensive fire and brew up one with a bazooka, thus breaking the German force and winning the game. 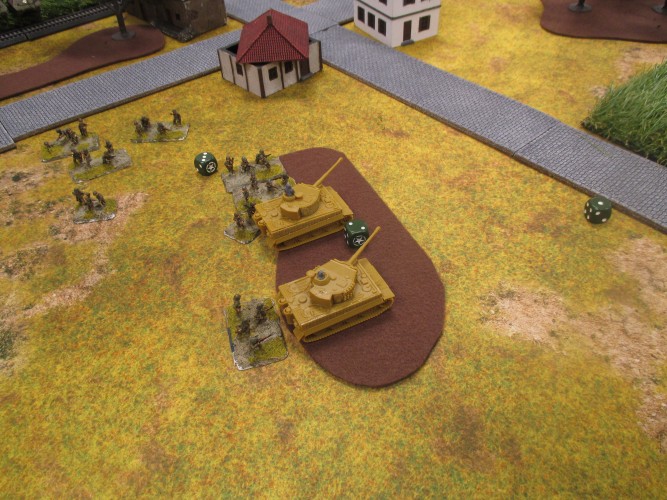 The riflemen decide to finish off the enemy the old-fashioned way..

Task Force Item had accomplished its goal with minimal casualties, thanks in part to abysmal luck on the part of the Germans, who littered the countryside with their burning hulks. There would be no breakout from the Falaise pocket here.