A Hot Time in the Town of Caen, or How I Learned to Stop Worrying and Love the Yanks

Being the defender, my opponent had to keep his Panzers off board in reserve (except for the Flammpanzers, which were held in ambush), but would automatically get a unit his first turn rolling due to Axis control of Hill 112. He then put his infantry in strong defensive positions on each objective, with the 88s behind them and the arty hidden from view. I got to start with my full army on board, and proceded to use the Greyhounds’ Spearhead move to the best of my ability. My opponent had mined all of the direct roads to his deployment, so I used the Spearhead to push further onto the No-Mans-Land flank, allowing me to forward deploy my M10s and a Rifle Platoon within spitting distance of an objective (relatively speaking). I then placed the other two Rifle Platoons and the HQ in a more central position so as to envelop the Germans. 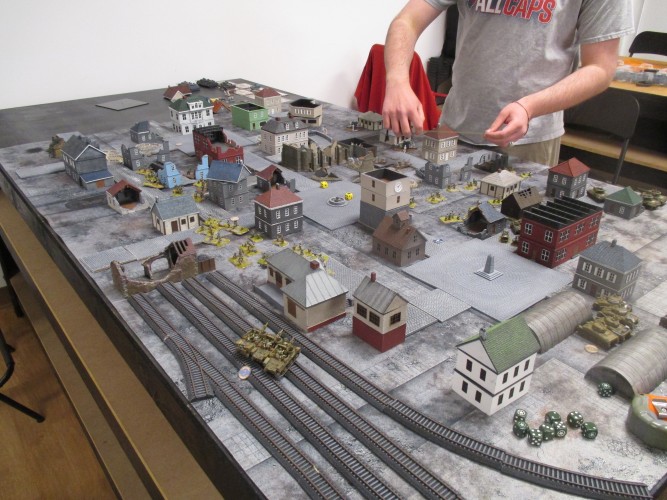 The status around game start

The American turn 1 started off with a bang. Because of the Spearhead deployment, the M10s were able to get shots on the Wespes, succeeding in killing 1 and bailing another. The American rifle platoons moved to slowly create a noose around the Germans, while also stopping to prepare to remove some mines along the way. The scouts proved their worth by spotting a bombardment for the Priests (side note: I hadn't realized until now how useful US recon can be as backup spotters, as they share 3+ skill with most support artillery) that killed an infantry team. However, both the Shermans and planes failed to do anything meaningful.
The Germans entered their turn one with their arty in mortal danger, but succeeded in remounting and putting a building between them and the M10s. Their pinned units also recovered, and began laying down a murderous fire on the flanking Rifle Platoon, killing a couple teams. 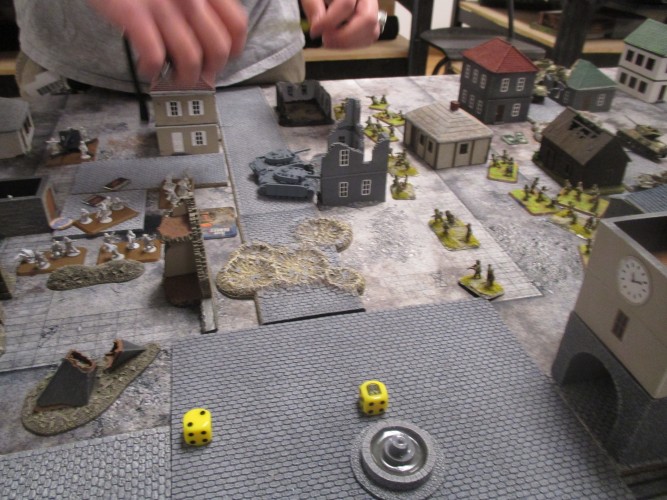 The situation near the table center at turn 1. The Flammpanzers are just there for show...for now. 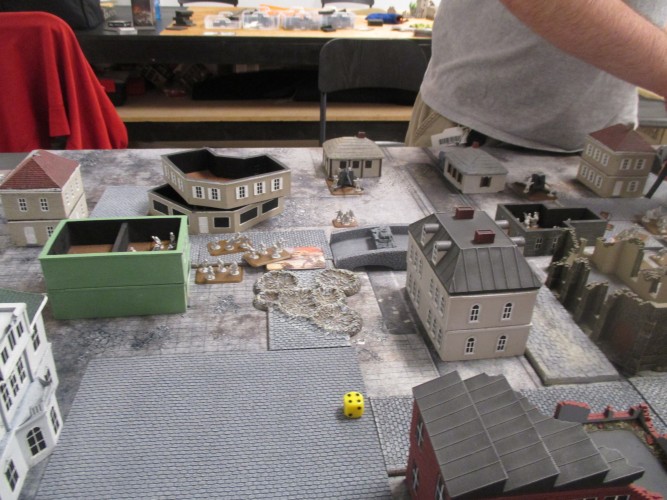 The Germans camped out near the objective closer to their corner. No doubt pillaging what little they can from Caen's ruins.

Turn two dawned for the Americans with the flanking riflemen refusing to unpin after the rubbing they received at the hands of the Germans (side note: ROF 3 MG teams are nasty), but at least the planes arrived. The P-47s then proceeded to fly through flak to bail a Wespe with .50 cal shots and escape mostly unscathed. The other riflemen continued to tighten the noose around the close objective (near the bombed out church) while the M10s took some speculative shots at the closer 88. The real stars of the turn were the artillery, who killed several Panzergrenadier teams and pinned one of the 88 nests.
The Germans started their turn two on a bad note when their 88 failed to unpin, even with a command reroll and burning the Lucky card, and then missed the M10s. The arty, however, remounted and ranged in on the M10s, but the M10s that were hit passed their saves. The far Panzergrens, seeing the danger posed to the church, began to reposition towards the center, while the troops already there shifted their fire to easier targets in the square. The combined fire of both Panzergrenadier units managed to pin both infantry platoons, thus pinning the entirety of the Rifle Company. 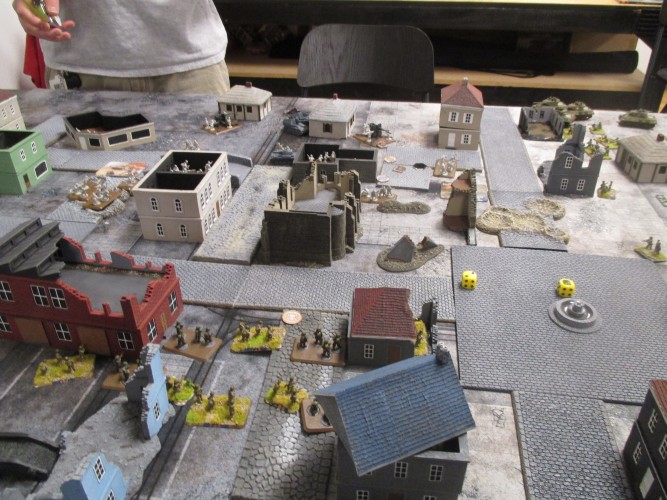 The Americans start to converge on the church as the Germans reposition to stop them... 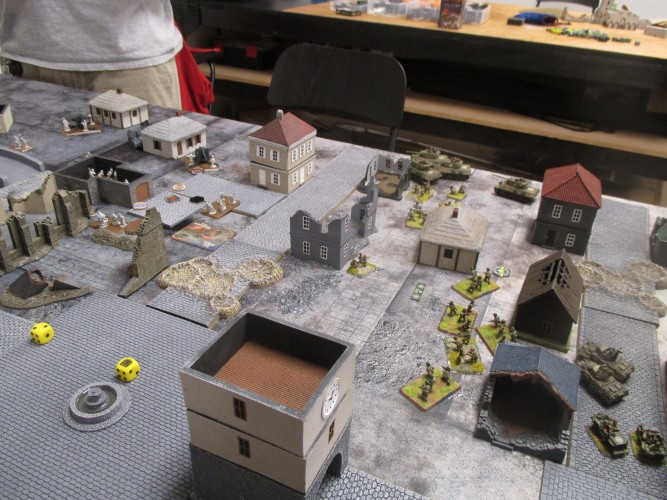 Large holes have developed in the flanking platoon's lines... 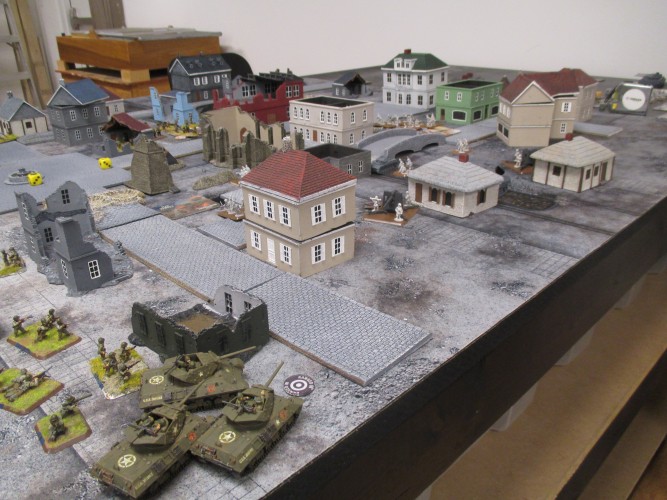 Despite coming under 88 and Wespe fire, all the M10s involved here manage to escape with their lives. 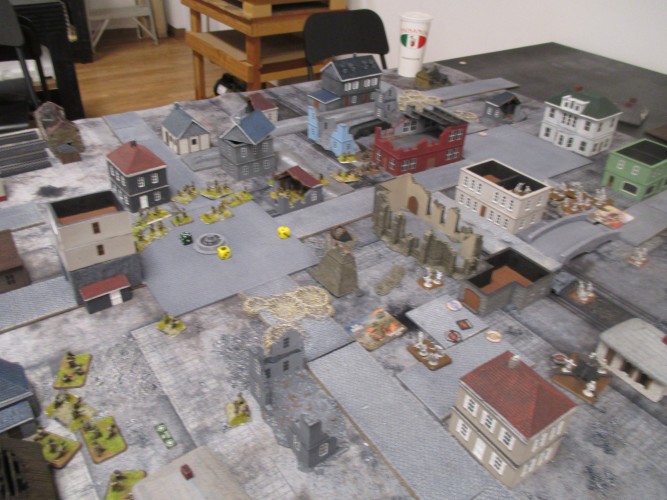 The situation at the top of turn 3.

The Americans managed to rally two of their three platoons, with only the teams in the factory refusing to unpin, despite having tons of infantry targets running around in the open, the P-47s refused to show up, citing "bad weather over England." The American infantry probed forward, while the artillery continued to hammer the church positions, causing even more casualties and putting one of the Panzergren units in bad spirits. The M10s tried to kill the observer, but to no avail while the infantry had similar luck trying to gun down or pin their German counterparts.
At the start of the German turn 3, their battered Panzergrens at the church decided that enough was enough and quit the field. They will no doubt be shot for their cowardice. With the objective wide open, the Germans wasted no time bringing the first of their Pz IV platoons on table and repositioning the other infantry into the church. However, their shooting failed to kill any appreciable number of Americans, while the arty started to harass the M10s in their new positions.
At the top of turn 4, I decided to burn my Total Air Superiority card, and was rewarded with planes. Seeking to finish off the arty once and for all, I was rewarded with the Wespes bouncing every hit. The infantry in the factory continued to refuse to unpin, while the others moved into contesting range of the objective. Seeing as the Germans had so willingly walked into my preregistered artillery kill zones, I let loose once again, pinning the second infantry platoon and killing a team. Smelling blood in the water, the Yanks assaulted the church, only to be pushed back by 5 hits out of 6 dice from the defensive fire. Clearly it was not meant to be. 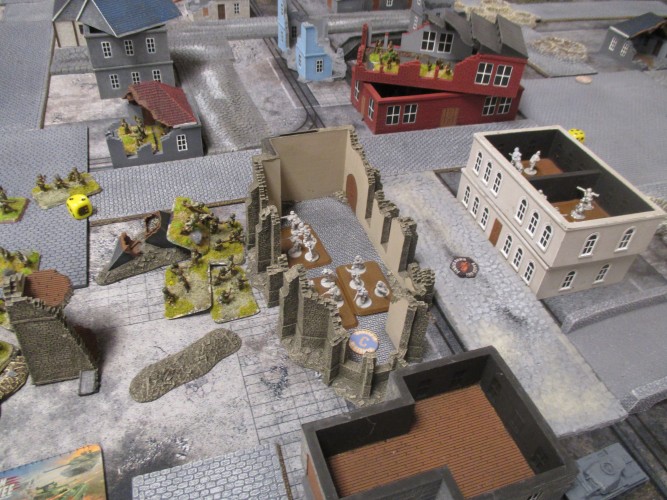 American infantry moments before being pinned by DF.

The Germans needed a miracle, and it arrived in the form of Flammpanzers. Springing from ambush, the pair drove onto the objective...and into the range of members of two infantry platoons. The carnage was immense. The Flammpanzers alone pinned both platoons and killed 6-7 teams, while the 88s, trading shots with the M10s, found their mark and blasted one. The Wespes, too found their mark and killed some infantry from the flanking platoon. The Panzer IVs, boosted by another platoon, formed a gun line but only hit the M10s once, which the target miraculously bounced.

Flammpanzers acting as a fire brigade. Never going to underestimate these beasts again... 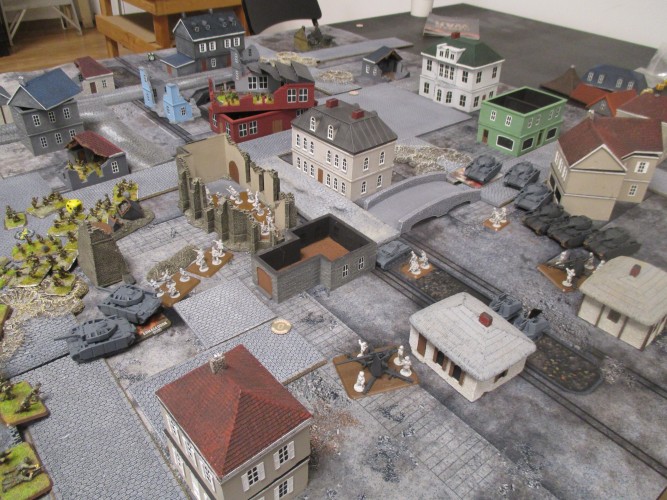 The Americans were quick to rally against the Flammpanzer menace, with some help from higher command. The M10s came back with a vengeance, destroying both Flammpanzers (side note: guess they got a taste of their own medicine) and killing and bailing a Panzer IV each. The factory infantry, though continued to refuse to unpin, as they liked their position a lot, thank you very much. The survivors of the flanking platoon made a spur of the moment decision to seize the house with the red roof next to the 88, while the platoon in the square traded fire with the remaining Panzergrens. With fewer targets American arty fire started to slacken, while the planes came again and left without doing any real damage to the Wespes.
The Germans continued to commit to their plan in turn 5, killing and bailing another M10 each while also keeping he US infantrymens' heads down.
At the start of US turn 6, the objectives went live. It was at this time that the company CO finally ecided to pay the factory platoon a visit, and managed to light a fire under their bellies which caused them to reposition to the next door building, threatening the far objective and practically surrounding the church at the same time. The M10s killed another Panzer IV, but the 88s remained unscathed but pinned. The recon, having repositioned previously, were able to stymie the German gun line by dropping the Priest's smoke barrage in front of them. Eager to join in the Panzer killing, the US infantry gunned down a Pz IV on the objective with massed bazooka fire. Meanwhile, the Army Air Force was too busy running the numbers on how improbable it was for the Wespes to survive this long to make another sortie.
The Germans were dismayed to see yet another one of their units fail morale and quit, this time being a sole Panzer IV. Undeterred by the smoke screen, the Germans finished off another M10, putting the TDs in permanent bad spirits while the units behind the smoke focused on the infantry threat. The Wespes took time from their busy schedule of bombarding the enemy to lob a howitzer shell or two in the general direction of the troops threatening the far objective. 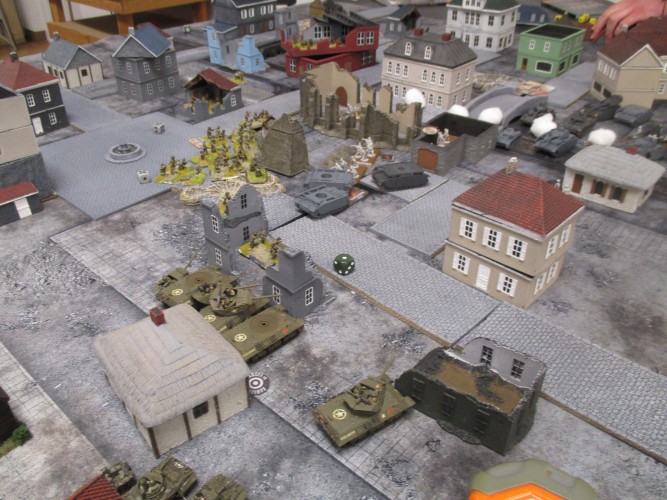 The situation at the bottom of Turn 6. The M10s don't feel too good... 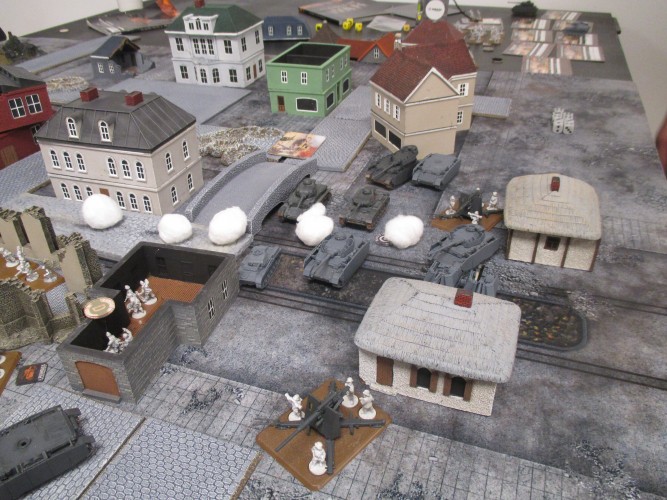 Smoke 'em if you got 'em. The Priests continue to do valuable work for the Allied cause.

Turn 7 started off with bad news: the remaining M10 decided that discretion was the better part of valor and fled the field. However, the situation very quickly brightened as the sounds of aircraft engines were heard from the north. The presence of such a large concentration of Axis armor attracted a pair of P-47s like moths to a flame. In a flurry of HVAR rockets, they managed to kill a Pz IV outright and bail a Wespe and Pz III. This cacophony of destruction was joined in on by the Priests, who used their preregistered smoke barrage point to drop a load of HE on the Germans, destroying an 88 nest outright. While the Shermans kept the German infantry supressed, the Americans went for another assault on the church into heavier defensive fire than the first, but miraculously made it and pushed the Germans back. The Germans were holding on by a single team at the church objective. 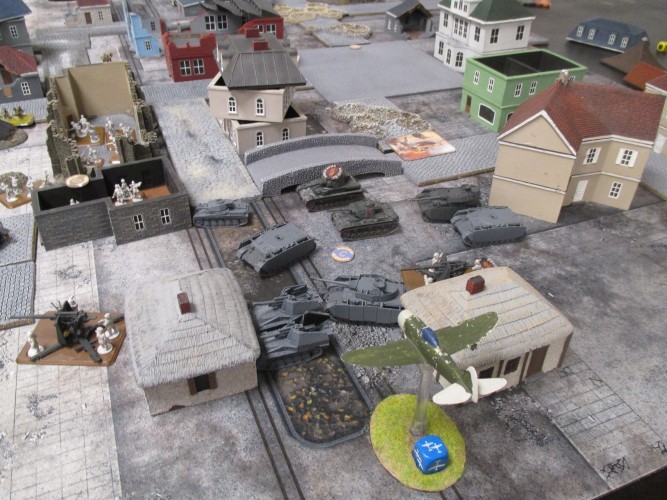 The cavalry arrives in the form of P-47s, throwing the German armored push into chaos. 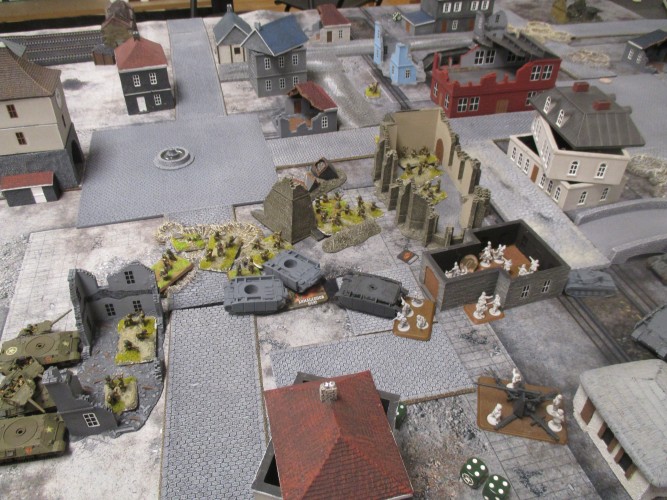 The Yanks on the cusp of victory.

The Germans, needing to defend both objectives at once, were forced to keep trying to shoot the Americans off the objective, a battle of attrition which they lost 2 turns later, handing the US an 8-1 win (as the M10s were the only full platoon to die).

The Americans had come in like a whirlwind and shown Monty how it's done, liberating what remained of Caen over the bodies of a whole lot of Germans. It was overall a really fun game, with the initiative twisting and turning every other turn or so. The Flammpanzers are a surprisingly effective ambush unit, but are sort of a one shot deal, while the Pakfront really complements a gun as fearsome as the 88. Sherman 105s are pretty costly for what they give you, but Priests are easily becoming my favorite artillery, over towed 105s. I'm still torn about the planes, though, as they are a hefty chunk of points for what is as much a psychological weapon as it is an effective one.