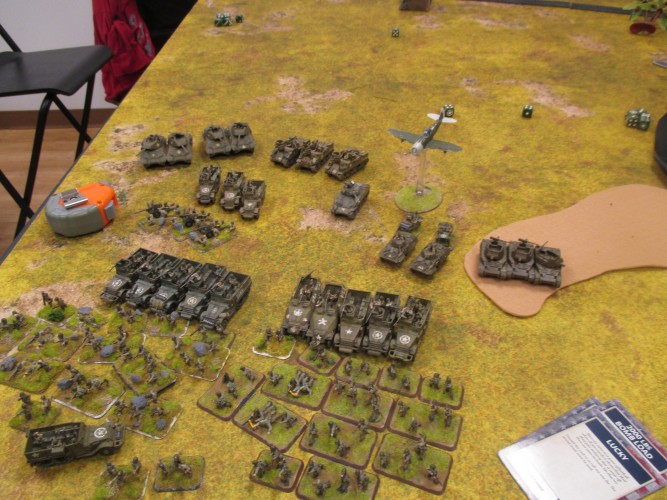 The stalwart ambassadors of freedom. The dastardly Germans couldn't make time for a picture. 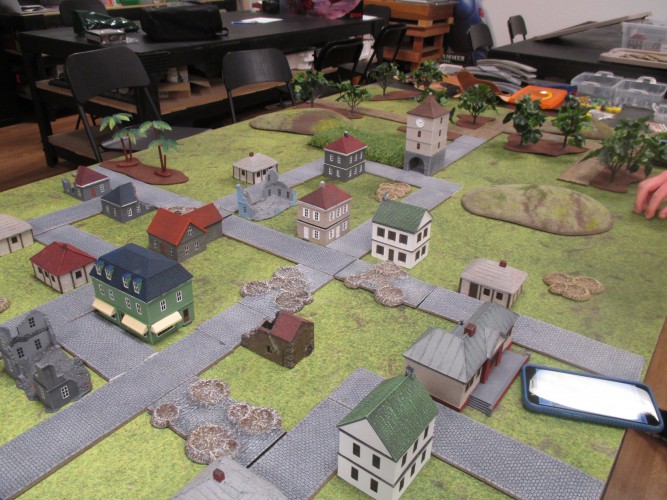 Our table, featuring a city on the defender's side and forested hills on the attacker's side. And comically large trees.

The two of us placed objectives in a pretty standard placement, with a forward and rear objective. I then used the Allied victory ability from last week to move the Objective 4 inches nearer, which would prove to be fortuitous later. Patrick had a bit of trouble determining which side of the table to defend, as both halves had strong defensive positions, be they in the complicated sightlines of the town or the expansive forests. He eventually decided on the town, and then decided to put his Tigers, Stummels, and a platoon of Panzergrens in reserve, to come on table behind my deployment zone. He then nominated the flamethrowers to be in ambush, a truly terrifying prospect. He then placed his two other infantry platoons in positions in the town, the Wespes behind the train station (and out of direct observation) with their OP in a forest on the flank. His 88s, being all converted to nests, were spread out to cover the entire front, with impressive sightlines that allowed him good coverage of most of the approaches to the town. 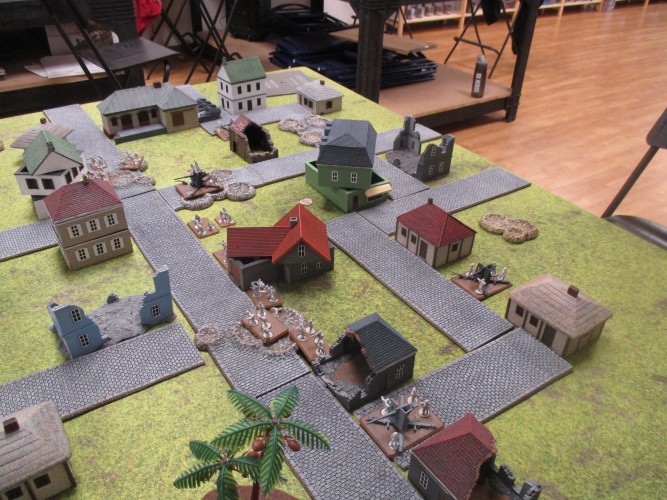 An entrenched force of German infantry and artillery prepares to hold the line so that their comrades trapped in the pocket can escape.

As for my deployment, I had to contend with the very real prospect of being attacked from both sides and caught in a crossfire. So, half my force, including the M10s, 57mm AT, and an ARP were arrayed to fight the enemy's reserves, while the Recon led the other ARP to a slightly more forward position. The Scotts deployed on my right flank while the Priests deployed on my left. Unfortunately, I had also placed them within range of the 88s... 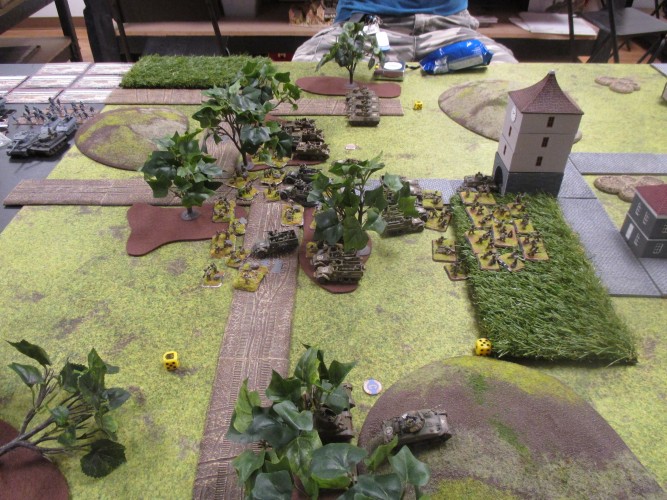 The Armored Riflemen prepare to stop the Germans from breaking out of the pocket.

As the Americans, I had the first turn, which I used to cautiously push forward across the whole line while giving the artillery time to pound the enemy. The Scotts killed an infantry team from the platoon defending the forward objective, while the Priests ranged in on but failed to kill the 88 in range of them. The airplanes failed to show up, citing "bad weather over England."

In contrast to the slow start of the Americans, the Germans' first turn was packed with action. Thanks to their reserve roll, a pair of Tigers rolled on table on the one portion of my backline not under surveillance from any AT, threatening the Scotts' rears. 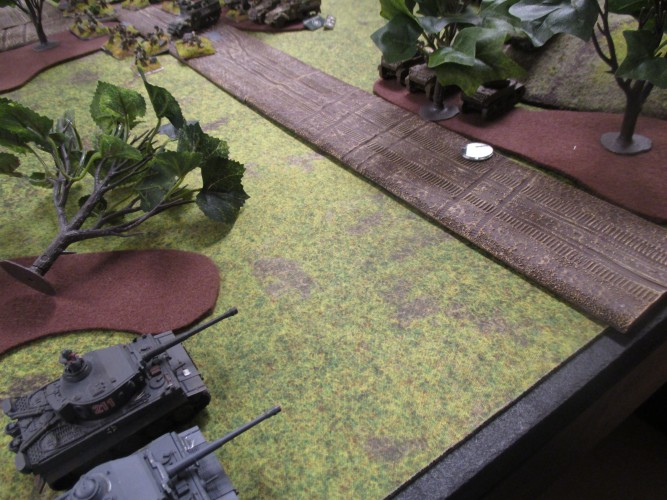 A pair of Tigers desperate to escape Falaise, as the Scotts enter full "brown alert" mode.

The 88 pinned by the Priests failed to unpin, and instead took a single shot that missed its tormentors. The Wespes, however, were much less inaccurate. Ranging in on the first attempt, they pounded the wood with the Priests, spreading pins and bails all over the place. The Tigers missed their shots on the Scotts, but I was determined not to let them get any more. 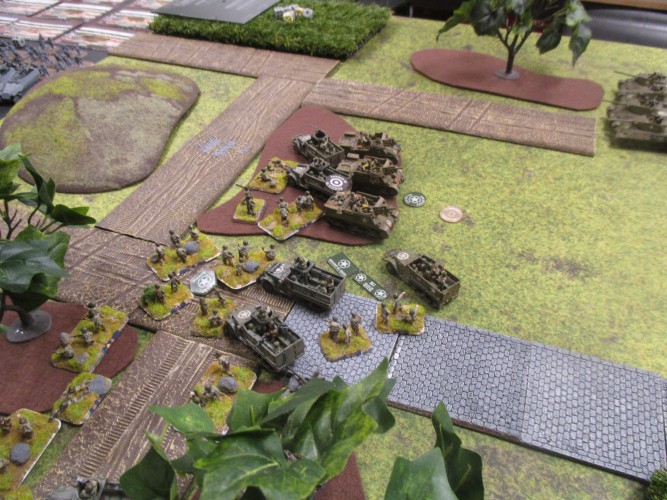 The Wespes starting laying down a carpet of hurt on the crowded American deployment zone.

At the top of my second turn, I sort of panicked and sent the advancing ARP back towards the rear to deal with the Tiger threat. Meanwhile, the Scotts and OP Sherman decided that the best way to escape the trap was forward, and succeeded in driving into a dead zone where no 88s could see them. 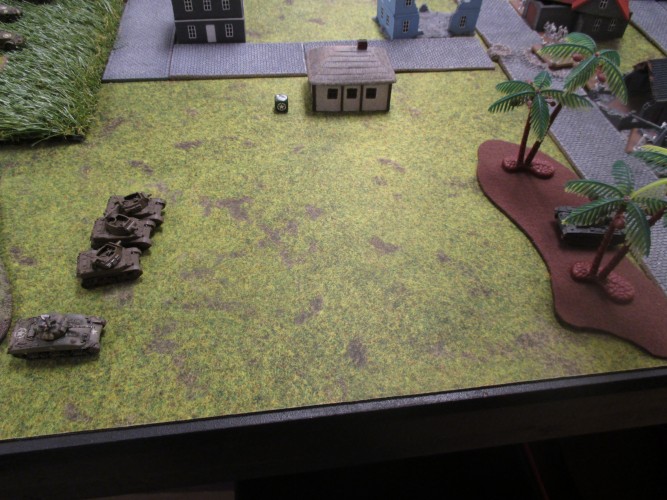 The Scotts and Sherman charge to escape the Tigers, right at the bewildered Panzer III OP.

The US deployment area becomes filled with teams and vehicles as they race to address the Tiger threat.

The M10s also raced over to the flank to deal with the tigers, leaving them exposed to concealed shots from an 88. The Priests, remounted, failed to kill anything again, while the airplanes again refused to show up.

The German turn 2 saw them get the rest of their reserves, bringing them up in to reinforce the Tiger corner. A combination of the Wespes and 88s managed to bail a Priest again, while another 88 destroyed an M10.

The American retribution in turn 3 was heavy and swift, almost too heavy. The M10s successfully blitzed, and hit the Tigers twice...causing the Tigers to fail both armor saves!
This resulted in a killed and a bailed Tiger. The 57mm AT guns had the Stummels in front of them, but failed to hit them at all. By contrast, the combined fire of 2 ARPs annihilated half the reserve Panzergrens before they could dig in. Meanwhile, the recon worked its way around the flank, finding a route on my extreme left that lead to the objective without good 88 coverage. Their platoon mortar then pulled off the amazing feat of ranging in on and killing a team near the close objective.

Just as quickly arrive, the Tigers are put down by a volley of M10 fire.

The sound of enginges from the west heralded the arrival of a flight of P-47s, who dodged heavy AA fire from the 88s to strafe the Wespes in a hail of machine gun fire, killing two outright. 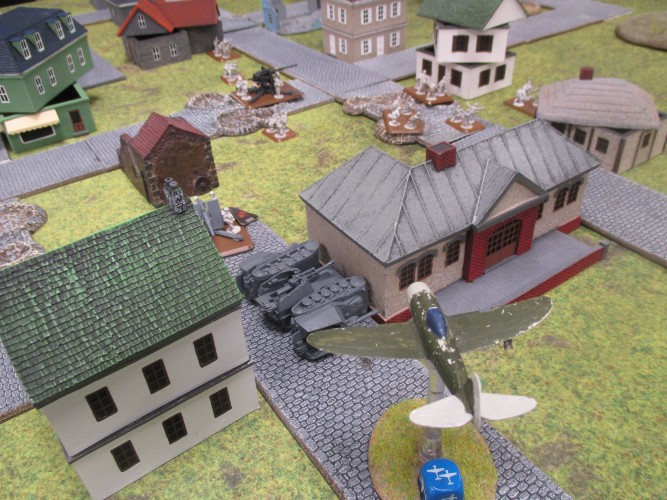 The P-47s finally deliver, ripping the Wespes to pieces with their .50 cals.

At the bottom of turn 3, the remaining Wespe proved it wasn't completely helpless by bailing a Priest. This, combined with an 88 finally killing a Priest, put the Priests in bad spirits. By comparison, the remaining Tiger failed his Last Stand roll and surrendered to the Americans, while the reserve Panzergrens dug in, their advance stymied. The Stummels and other 88s knocked out a couple assorted halftracks, too.

It was at the top of Turn 4 that I realized I had a problem: I was too far from the objectives. I had to get teams within 8 inches of an objective by the end of Turn 6 or lose the game, in spite of the damage I'd inflicted. While the Priests failed their Last Stand and fled, the 2 ARPs both moved as fast as they could towards the objectives, Along with the M10s. The Recon continued to blast the near objective, killing another valuable team. The Scotts, finishing their wild charge, battered an 88 at point blank range but failed to kill it. The 57mm AT finished off the Stummels to a man, removing most of the threat from the rear. 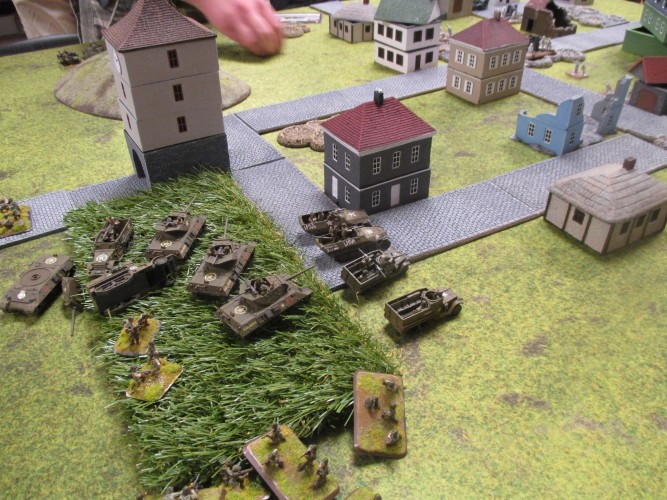 The US forces begin to race towards the objectives, with time running out. 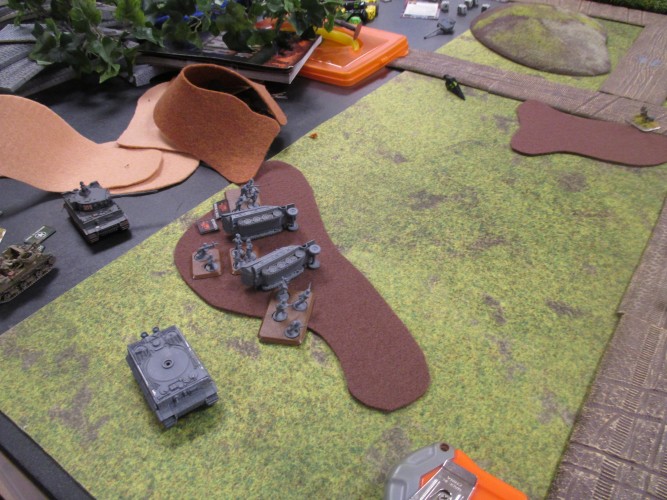 The Stummels meet their end, leaving just the weakened Panzergrens in the rear.

The Germans, finding themselves with a lack of good targets, only succeed in bailing a Scott with the 88s. The remaining Wespe continues to prove a thorn in the US's side, pinning the ARP closest to the near objective.
On the top of the US Turn 5, the pinned ARP fails to unpin, forcing the M10s and recon to take up the brunt of the advance on the near objective. The Scotts, supported by the OP Sherman, finished off an 88, while the planes arrived and failed to kill another. The Greyhounds moved to within 8 inches of the near objective, with the platoon mortar firing off a last bombardment killing yet another team. 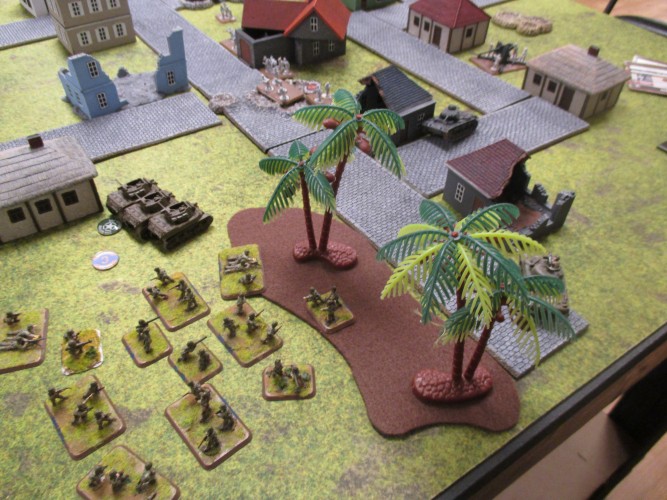 One of the hated 88s is finally killed by the Scotts.

At the top of their Turn 5, the Wespe finally quit the field. Faced with the loss of all their mobile assets, the Germans set out to cause as much trouble as possible. The reserve Panzergrens moved up and blasted away the AT gunners' halftracks, earning a VP for the Germans, while the 88s killed the bailed Scott and missed their other targets. 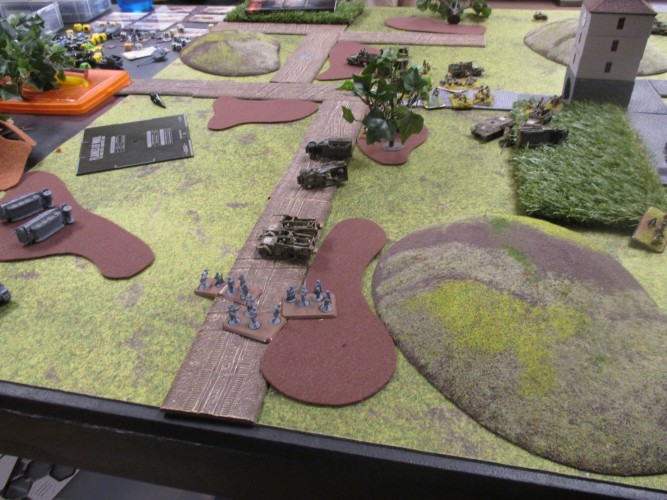 A group of halftracks about to have a bad day...

At the top of the American Turn 6, the M10s and Recon both moved into 8" of the near objective, with the Recon outright contesting the objective, with the now unpinned ARP close behind. The second ARP's bazookas focused their fire on the Panzer III OP, now forced into the open by a previous assault, and killed it with mass bazooka fire. 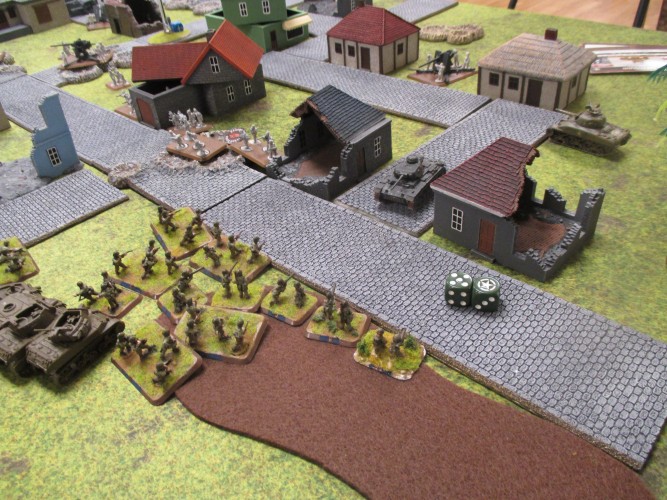 The rest of the ARP, supported by the Scotts, kept the other Panzergrens' heads down, preparing for an assault. This assault killed a couple Panzergrens, but cost the ARP most of its rifle stands. Still, it kept the Germans engaged. The OP Sherman unsuccessfully went after the 88.

For the Germans, Turn 6 was do or die. Springing the halftrack ambush, Patrick sent them against the open-topped M10s, while the objective Panzergrens swarmed the Recon. Despite 8 dice of fire, the halftracks only managed to bail 1 M10, while the Recon safely disengaged from the infantry assault. With this failure to win the game then and there, and with a (mostly) full strength ARP bearing down on his now exposed infantry and flamethrowers, Patrick conceded the game then and there, rather than drag it out for several more turns. The US had secured a 7-2. 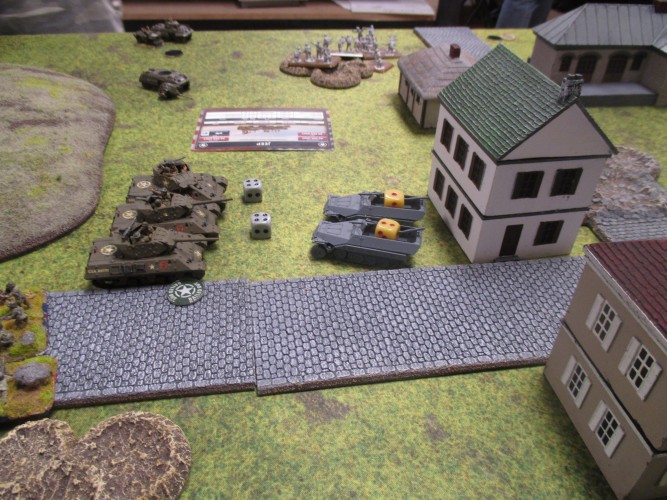 The M10s see their worst fears realized in the form of flamethrowers. 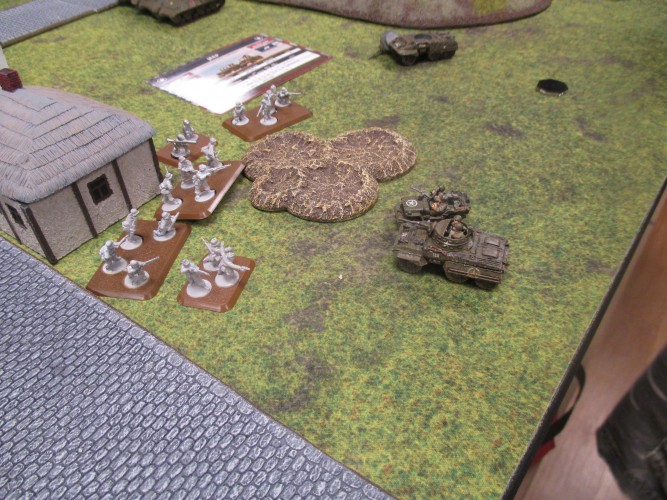 A mob of infantry attempt to bust up the Recon's rides

1 Person Has Recommended Nickreidsdsmt For a Commendation