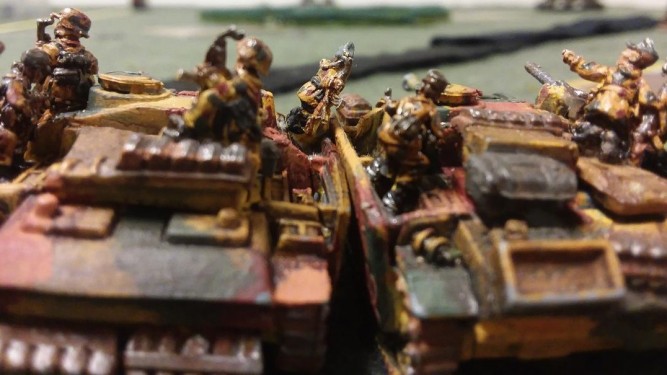 A supply dump is a perfect opportunity for a tank raid, but timing is everything

An abandoned Canadian tank has been pressed into service

Again Scrapyard, with a slight variation in forces. Two MKIVs and 4 STGIII with a Puma square off against the Americans with one Sherman V (to make the points come out) and one M4(75) plus 3 M4(76). No minefields. Different allied player, different approach. 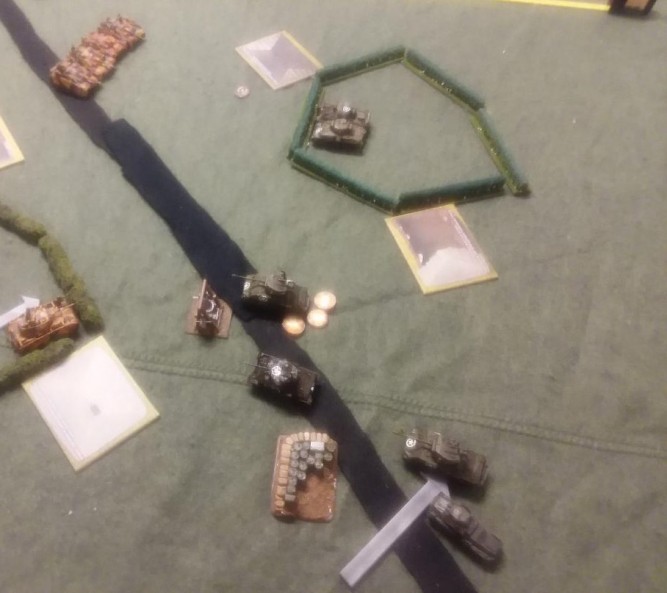 Situation at Turn 2, also giving a good overlay of the field

As defender, Axis placed the fuel dump objective, and placed it foolishly (guilty as charged). It turned out tanks could occupy positions in the middle and dominate both objectives. Bad Nagten! No biscuit!

That shaped the whole battle. BH sent the three M4(76) after the two objectives while sending the two M4s - one Brit and one American - to contest the other.

The opening turn saw the 3 M4(76) shoot at the tank by the corner of the bocage, doing 4 hits (one short of kill). Every available German tank lit up one of the M4(76) doing 5 points of damage. The Germans, by a combination of blitz moves and other movement, created the situation shown here, zipping the Puma partially behind the slow-moving M4 to create a shot, and distract the M4.

That would have been an abysmal shot except that the Puma's position took away 2 defensive dice - one for flank and one for close range. So 4 attack vs 3 defense. Two hits - and one was the critical 'jammed turret.'

This screwed up BH's planned shooting. The Sherman with the jammed turret couldn't shoot, and this forced the Sherman between the two objectives to traverse its turret and light up the Puma. Three hits (2 from a lucky hit critical!) and scratch one Puma.

The other M4(76) and the two M4s lit up the undamaged MKIV. If they were successful, it was game over. However, the MKIV had two defensive dice from its movement, 1 for armor, 1 for cover, and 1 for enemy movement. Net result 1 hit.

The German tanks concentrated on the two M4(76)s contesting the soup kettle objective, and with 4 StuG rerolling they averaged 2.5 hits per shot. The badly damaged M4 exploded (it even had an irrelevant engine fire). The last STG and the two MKIVs collected an ammo explosion and three other hits. This left on 'assault gun' M4(76) and two Shermans in the Bocage, with two damaged but functional MKIV within movement distance of the fuel dump.

The VP score was 2 points for the Americans, and 1 for the Germans. 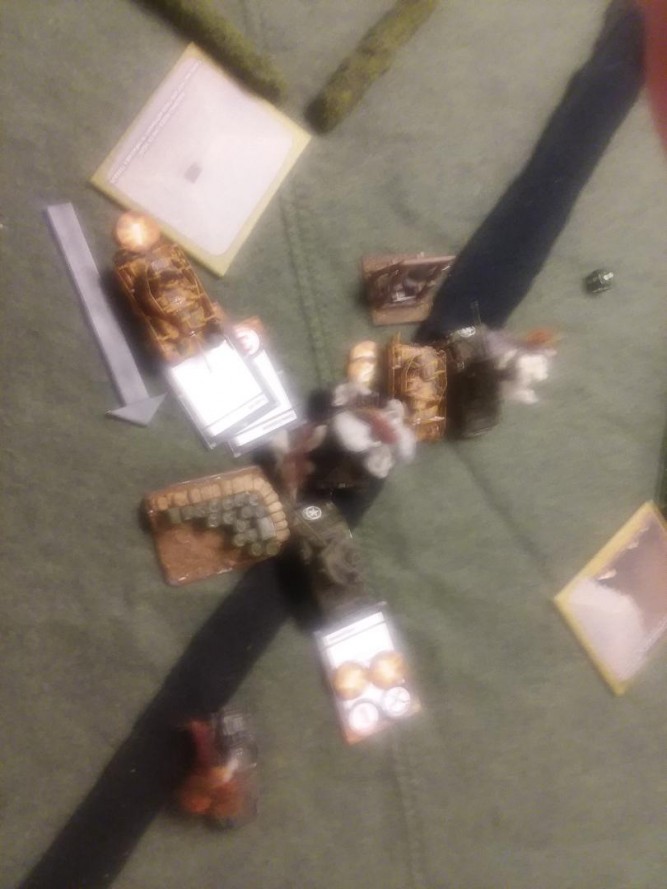 With two VPs at stake the Americans had a problem. Absent a critical hit, two MKIVs would shoot at point blank range into one Sherman, and it would be difficult to position the Sherman to avoid fire from all the STGs. It certainly wasn't possible to contest both objectives when it was time to move the Sherman, as the MKIVs occupied the places where the Sherman 76 could be screened from most of the STGs (off picture to the top). BH positioned the tank to minimize the long range fire, and brought the M4 over to shoot the second tank, as either one surviving would give the Germans 1 VP, and 4 STGs were contesting at the other end of the table. 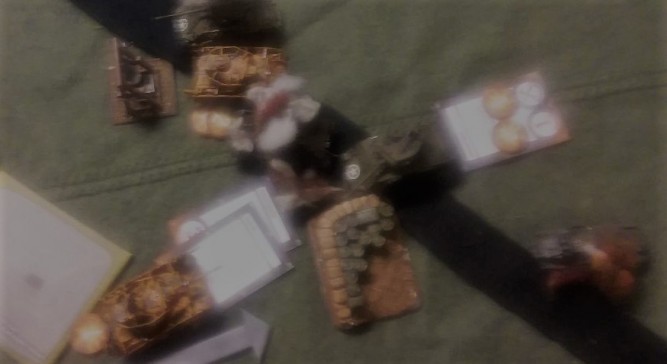 Showdown, or gunfight at an OK suppenkessel

The Americans shot first, and beat up on the lightly damaged MKIV, scoring the other Ammo Explosion but also a ZERO DAMAGE critical hit. The MKIV hung on, barely, and that meant that the other objective would tell the tale. The M4 took a crack at the carefully positioned 1 hit point remaining MKIV, but between its movement, the MKIV's movement, cover, and armor, 6 defensive dice proved impossible to overcome. The Sherman V took a long range, stationary shot on the MKIV in the bottom of the picture and rolled 1,1,2,3 and 3,3, 2,2.

The primary target for the German shooting was the Sherman V. Stationary to gain its wonder power, the StuGs got to reroll their dice, having closed to the objective on blitz. The two StugS that had no other shot went first and each managed two hits, one of which was a 'lucky hit' 2 point critical. The borrowed Sherman V was dead. Now the Germans were guaranteed a VP, and three tanks had shots on the M4(76). 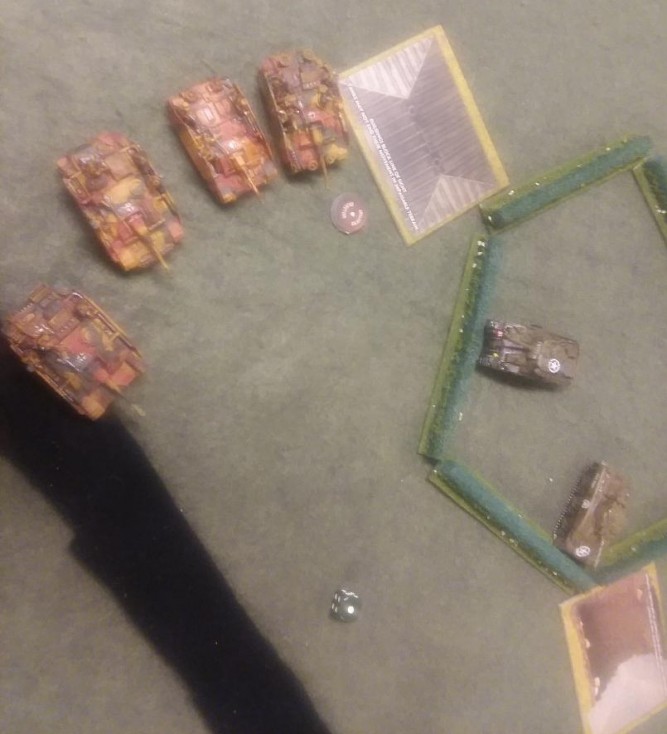 The STuG managed 3 hits thanks to flanking position cancelling cover and its reroll, and two were 6's for a damaged engine and a lucky hit, for 4 damage. The two MKIVs, both of which arguably should have been dead, finished it off. The Axis scored 3 VP that turn, for a come from behind 4-2 victory

HOT WASH
#1 remember not to put the defensive objective too close to the centerline objective.
#2 remember that optimizing shooting on turn 1 may leave you in poor position to contest an objective on Turn 2.

Frankly I should have lost that game. No substitute for luck, as they say; better to follow a lucky general than a smart one.

Maneuvering to stay in contesting distance and maintaining the +2 defensive dice for fast movement becomes very difficult. It looks easy until you actually lay your measuring stick down and find the permitted positions don't allow you to both have blocked line of sight AND be within contest distance. A surprising lesson for both of us, used to more free-wheeling Flames positioning.