A New Country Heard From

BH wanted to try out the Russians in a game of TANKS!

The Soviets were the least 'developed' force in the original TANKS! boxed set so it didn't get much more than a brief look when we started the campaign. No Soviet tanks in Normandy was a second element of logic. BH noted the benefits of speed 3 when encountering the Puma, and that is one characteristic of the bread-and-butter Soviet tanks in TANKS! 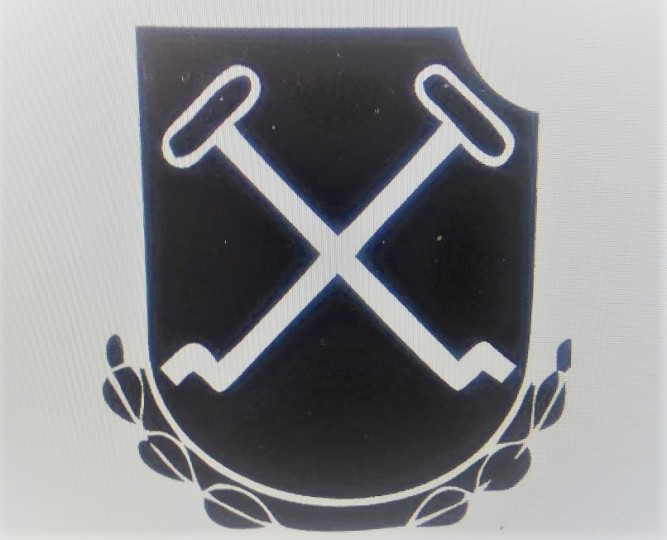 Tigers and MK IVs from the SS match with T34/85s

We played the new scenario at 100 points, using my extensive supply of felt to make the river. The Germans defended against the Soviet surge into Brittany. The new scenario made terrain placement a little less sterile. I placed a woods in the 'southeast' corner of the map, and BH placed another woods more or less in center court. My hope was to engage from the woods into the flank of the attack. BH wanted cover. We scattered the buildings around the objective with me placing two on my side of the river. 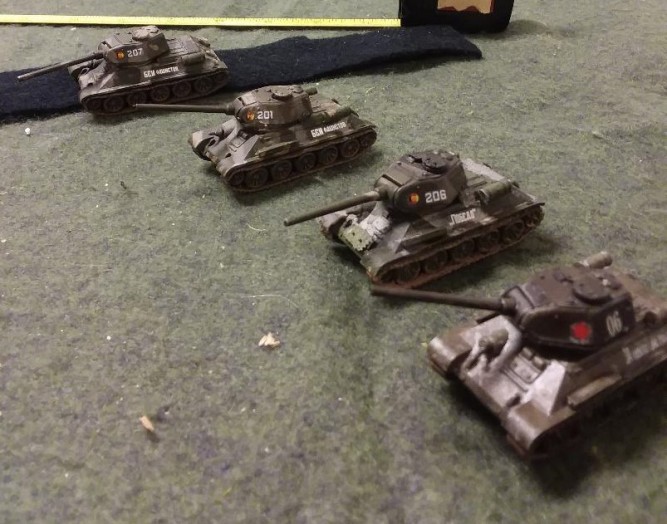 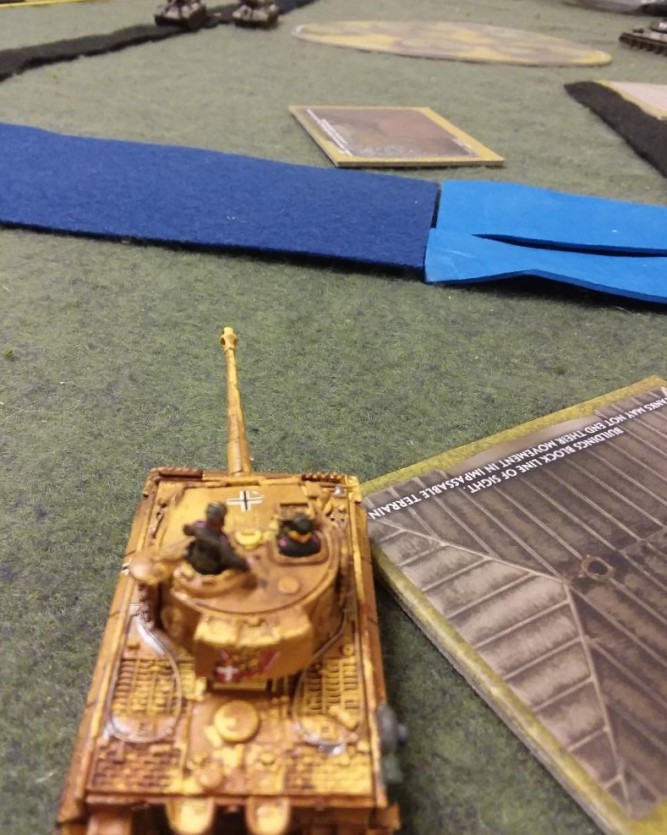 Unlike most games shooting started on turn 1, as the T34s surged forward. Keep in mind that throughout this game the '6' initiative displayed by the T34/85s meant that they moved second and shot first, so my Germans were guessing about positions to shoot. BH cleverly blocked a potential flank shoot by interposing one tank with another.

The Soviet wonderpower is coordinated fire, so keeping tanks in groups is a premium point for their play. Once a Soviet tank shoots a target, any other Soviet tank w/in one arrow can shoot the same target with +1 attack dice.

The Soviets managed two damage points on one MKIV and the SS came back with 2 on 1 T34 to the southeast and one on the T34 to the northwest. Just to make things better, the damage MKIV suffered from an engine fire and didn't put it out, bringing its damage to 3. 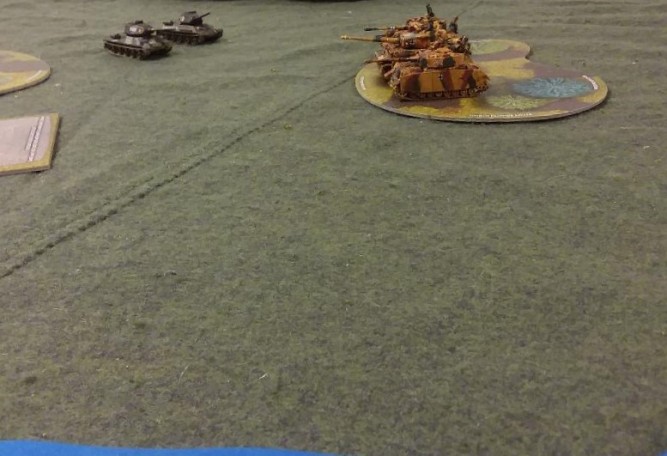 the other flank - briefly outnumbering the Russians, to little effect

After seeing a blazing display of ineptitude from the SS panzers, I realized I wasn't going to stop the T34s. The combination of 3 moves plus 2 of my moves plus 1 armor was giving the T34s 6 defensive dice, and my Tigers were only shooting 5. My first plan in ruins, my new plan became...chaos. 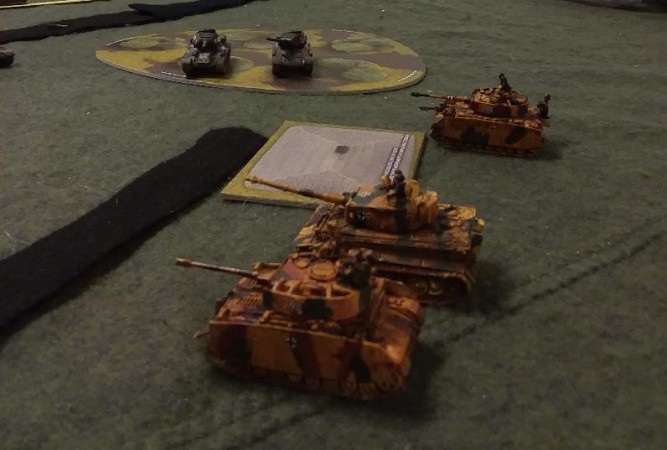 The charge to the bridge -turn 2

My Tiger on the west bank of the river went stationary. My kamphgruppe roared out of the woods headed for the bridge, as it was clear that the Russians would start scoring VP soon. Two T34s dove into the center woods while the other pair closed on the bridge.

My stationary Tiger took 3 hits from an ammo explosion critical, but managed to avoid other damage, while its 'reroll if stationary' capability managed to cause 2 DP on top of the previous one. The other exchange was a waste of ammo - both sides were getting 5 defensive dice from mutual movement, at least one for armor, and one for the woods meant that 7 defensive dice opposed 5 (or 4) attack dice. 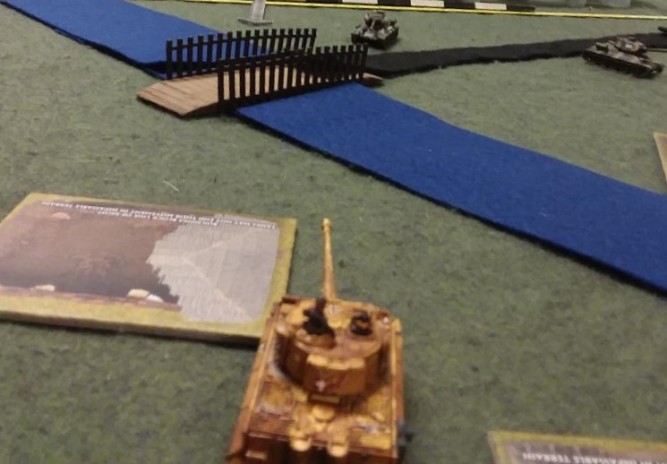 Turn 2 shooting: Where is Wittman when you need him? A Tiger causes minimal damage to a T34/85, allowing the Soviets to score a VP

Turn 3 saw another T34 reach the bridge while the other two lagged a little behind. I had sent the kamphgruppe down to the river bank trying to avoid further damage to the burning MKIV, who managed to put out the fire.

The short range gunfight that resulted saw my damaged MKIV and the heavily damaged T34 exit the game, and saw another point of damage added to the stationary Tiger as well as a critical hit on the surviving MKIV jamming its turret. The second T34 by the bridge hung in there for the VP but suffered 2 hits, as well.

Concurrent with the scenario rules, the dead T34 was picked up - no wrecks within an arrow of the bridge 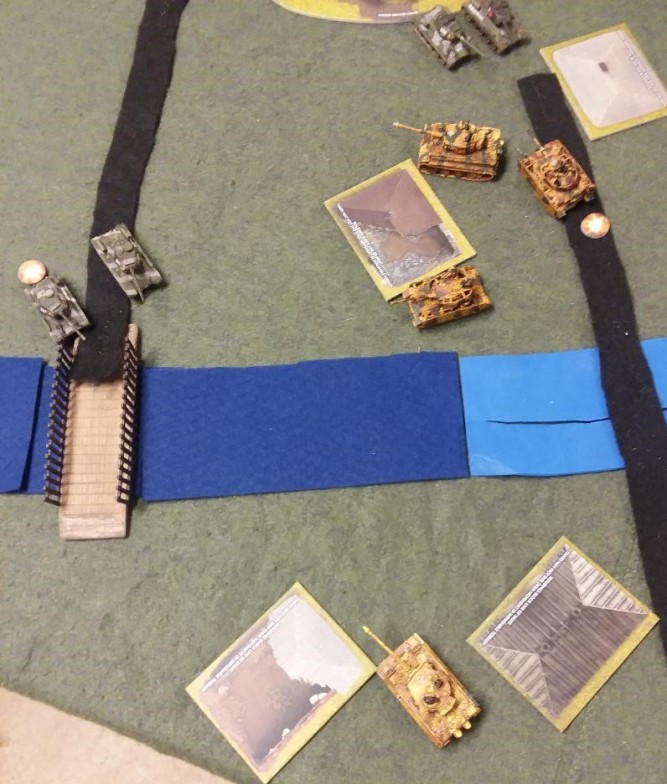 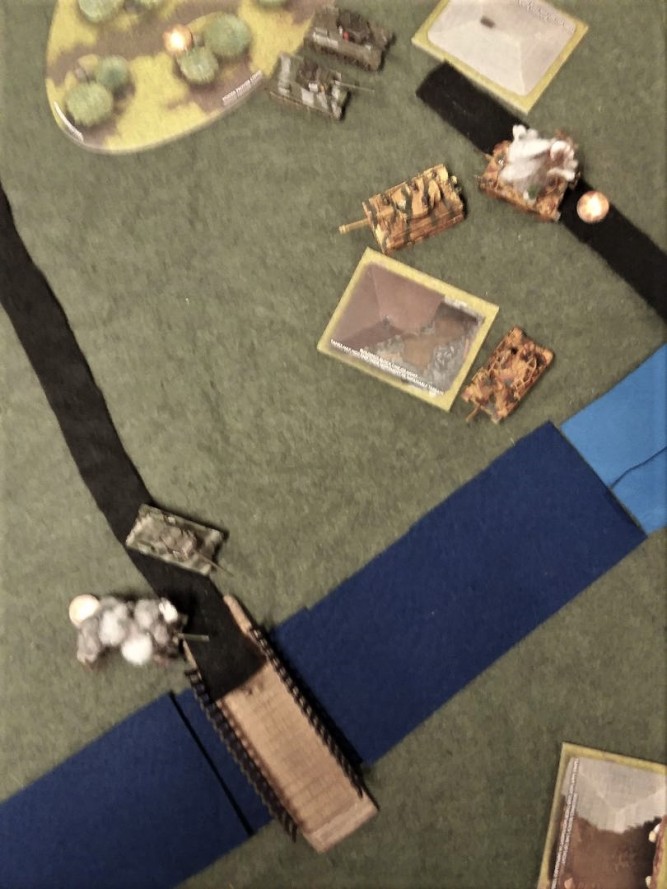 Results of Turn 3 shooting - scratch one T34 and one MKIV

With two German tanks and three Soviet tanks now in close reach of the bridge, the challenge became preventing the Soviets from flanking the MKIV. The Tiger, as a heavy tank, is immune to flanking shots. With the Soviets moving last my solution was to position the Tiger close to the bridge, and close enough to the MKIV that a Soviet tank couldn't fit in between them, and the MKIV close enough to the nearest house so that the Soviets couldn't slide between them either.

BH slid his tanks northwest, so that a group of 3 could fire on the MKIV, and two were close enough to contest the bridge. The other choice would have been sliding southwest, which might have eliminated the stationary Tiger from the shooting, but would have given up the VP. Events would prove the road not taken better.

The T34s ganged up on the surviving MKIV. As typical, the first shot missed but the next two blew it apart, thanks to short range modifiers and the Russian wonder power. But the damage did not cripple the MKIV's shooting ability.

My return fire saw the stationary Tiger's reroll finish off the damaged T34 ( two criticals each 2 hits). That allowed me to concentrate fire on the other contesting T34. The Tiger's shot missed but the MKIV's final fury winged in another two point critical, this time affecting the engine. 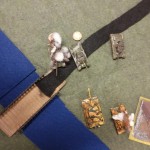 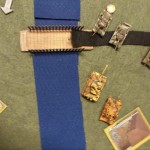 The position above shows the results of Turn 4 shooting. Another pair of tanks left the table.

Two T34s - one damaged and one pristine - faced two Tigers - one damaged and one pristine. (remember one Tiger is lurking in the village off screen to the bottom). More of the buffalo shuffle and the tank two-step followed, as the only protection was speed. The damaged T34 failed to fix its engine, and the two Tigers were able to anticipate its positioning perfectly. Scratch a T34. The previously undamaged Tiger took a hit. 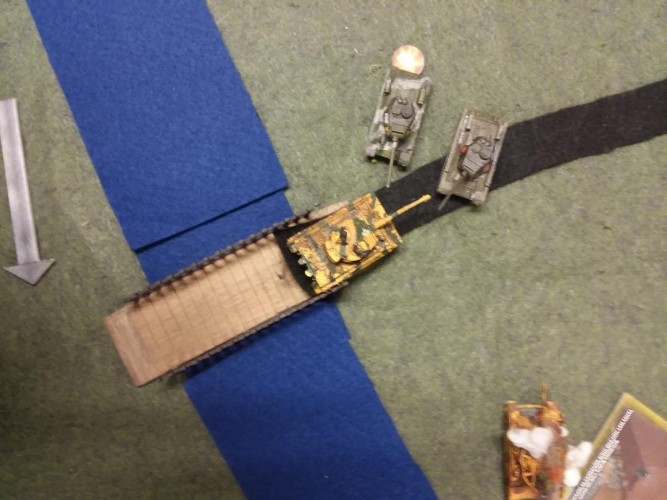 Now what followed was surreal. It is a simple principle of geometry that 2 points make a line, and for the next three turns BH simply used his superior initiative and speed to occupy a position where the distant Tiger couldn't shoot. Nobody got lucky before I woke up and started to move the distant Tiger to the bridge, but by then our time limit expired The T34 moving fast all the time and the Tiger were a pretty even matchup (+5 moving +1 armor -1 close range for the T34 compared to one higher for the Tiger) and I just didn't convert the narrow statistical edge fast enough. 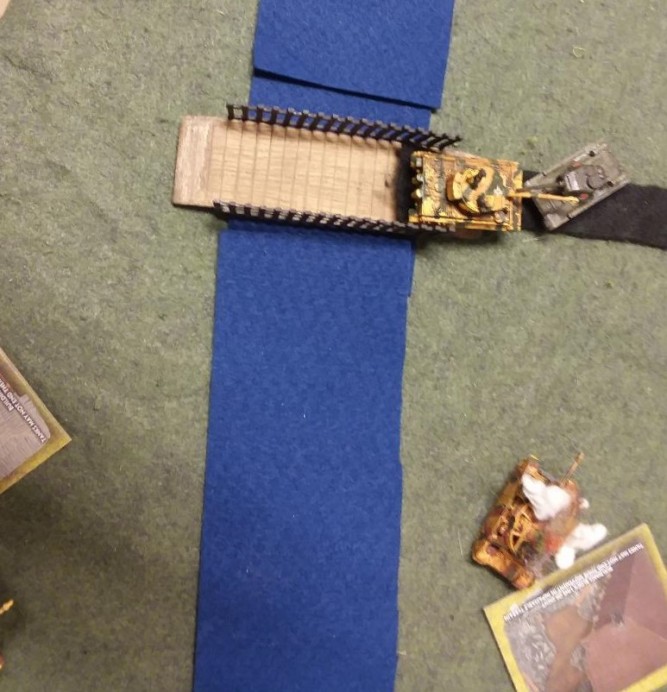 Imaginative tactics - head butting the Tiger? No, just using it to block a shot

I definitely slipped on the math at the end of the game, not calculating the impact of geometry or the occasional long range shot (reroll 5 dice vs 6 defense dice isn't all that great an advantage)

BH's discovery of the geometry trick saved a loss.

1 Person Has Recommended Oberst Nagten For a Commendation