Game of tanks using the Death in Bocage scenario with a twist...British tanks. In the game of tanks, the Sherman V has the same initiative as the MK IV and is priced the same as a STG and the Firefly weighs in at 21 points. On the defensive, the British Shermans struggle with the MK IVs, as the scenario gives the Germans initiative advantage (ATTACKERS win initiative ties).

The British wonder power is semiindirect fire which requires the tank to sit still, and in a scenario like this one, it didn't help much 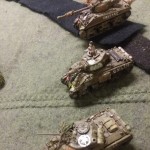 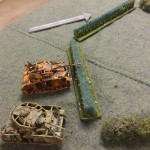 Rogue's gallery. Mix of 7th Company 16th Panzer and newly-arrived MkIVs joining 17th SS. Escorts to the general, along with infantry and reconnaissance elements. Canadians of Squadron B, Gary Horse, defending the supply dump. The Canadians set up around the dump, facing one Troop (hereafter A Troop) along the blacktop road to the southwest, and facing one troop northeast back the way they came. Their mission was to secure the area until another convoy arrived with lorried infantry.

The scenario calls for 'scattered' deployment and came up with paired 1's paired 4's and 5,6. The Germans deployed the 'free placement' tanks to the Southeast, leaving a notional escape route back the beaches. (You can't win by escaping, of course).

The terrain had two 'BOCAGE' sectors NW and SE of the objective and four structures scattered around the road. Two were damaged allowing (in our play) tanks to enter. 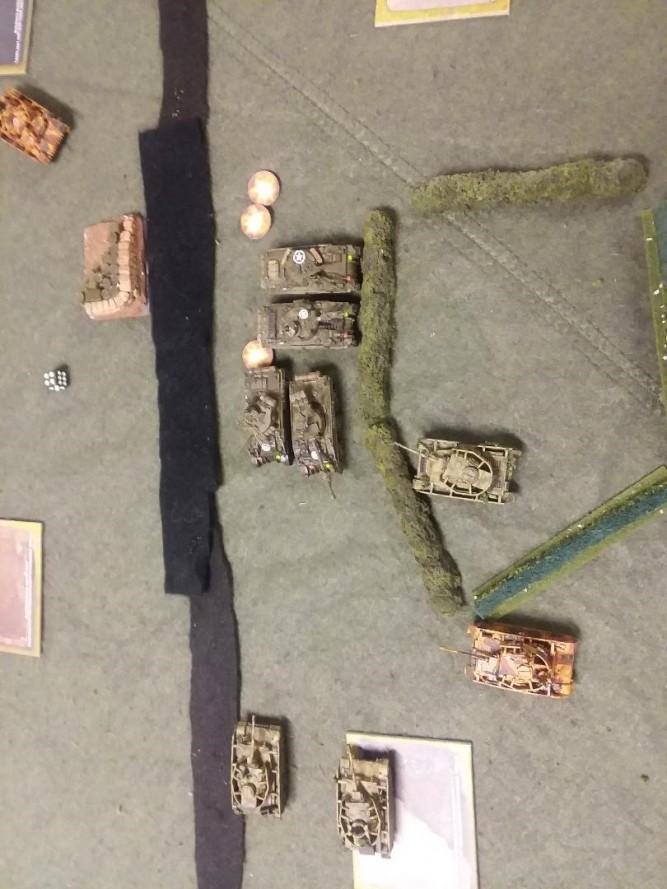 In case you don't play Tanks, and missed earlier reports, INITIATIVE is very important. The Tank with the lower initiative moves first, and shoots second. Shooting second means you are vulnerable to critical hits from your opponent, and about one in 3 hits will be a critical. In this scenario, the Canadians were always moving first, and shooting second.

The first two turns were pretty indifferent - all the shooting was against 5 or 6 defense dice. The Germans, additionally, were using the initiative to wing in flank and rear shots (taking away a defensive dice). On Turn 2 they took two damage to MK IV NW 1. The Gary Horse, however, had 3 damage on Troop B's command tank and a busted engine (-1 move). Lame ducks are easy meat, so they Canadians formed a hedgehog - something that wouldn't work in Flames because you can shoot thru vehicles. No can do in Tanks! The Germans took advantage of moving second to set up a massed fire, completely taking the two Canadians tanks out of picture to the NW out of the action. 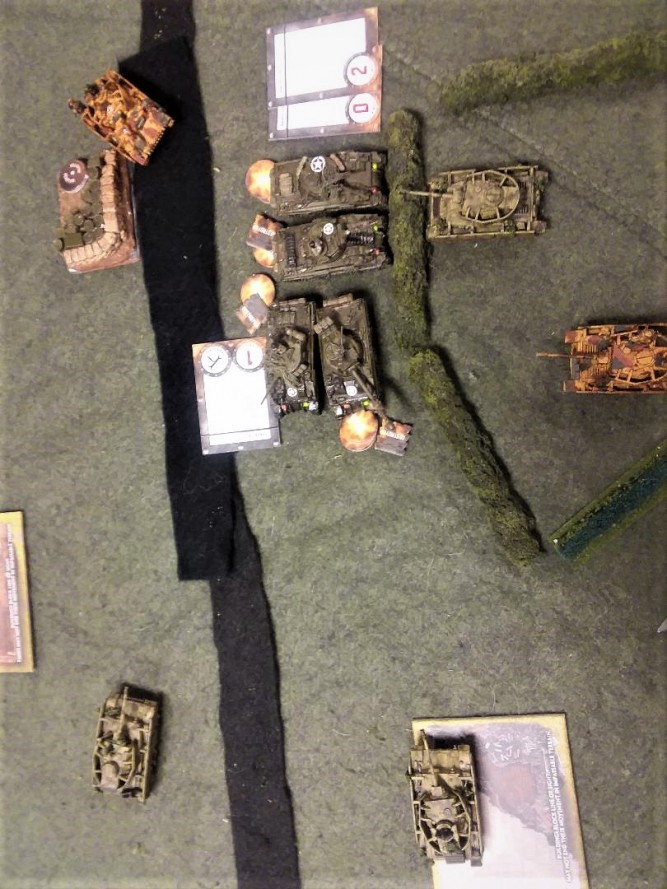 The Germans had once again optimized firing positions, only prevented from 'perfect' shots by the limits of the stick-based movement system. (you place an arrow touching your tank and lay the tank's side or rear perpendicular to some part of the stick's shaft. Makes for some interesting times moving around buildings.

The results were ugly. The Canadians had been affected by the lame duck, and moved only once. With one exception, they were not in cover. In every case they were flanked by their tormentors, the Germans choosing to shoot at flanked targets to maximize damage. A couple tanks had elected not to move because they had a target flanked. This allowed them to reroll their entire handful of dice. Now defensive dice became 1 for Armor, 1 for Canadian movement, 1 for German movement (sometimes not) less 1 for flank and (in two cases) 1 for close range.

The Germans rolled 24 dice and the Canadians opposed that with 9 defensive dice. With the reroll applying twice, the Germans effectively got 32 - expected outcome 5 criticals and 11 other hits with 1 critical and 3 other hits neutralized. The Germans beat the odds with 6 criticals but only (ONLY!) 7 other hits. Firefly 2-4 took two criticals and bailed out for one of them, Troop B's commander took two criticals and became stunned, A-22 took an optics hit and Troop A's commander took a stunned and an engine fire. Accumulated hits would eliminate both Troop commanders at the end of the turn. The 'FINAL FURY' was pathetic thanks to all the damage, and the Germans took no casualties. (pathetic dice also factored in). Meanwhile the other two Shermans had failed to get positions guaranteeing a shot, and the two NW MKIVs had interposed a building. 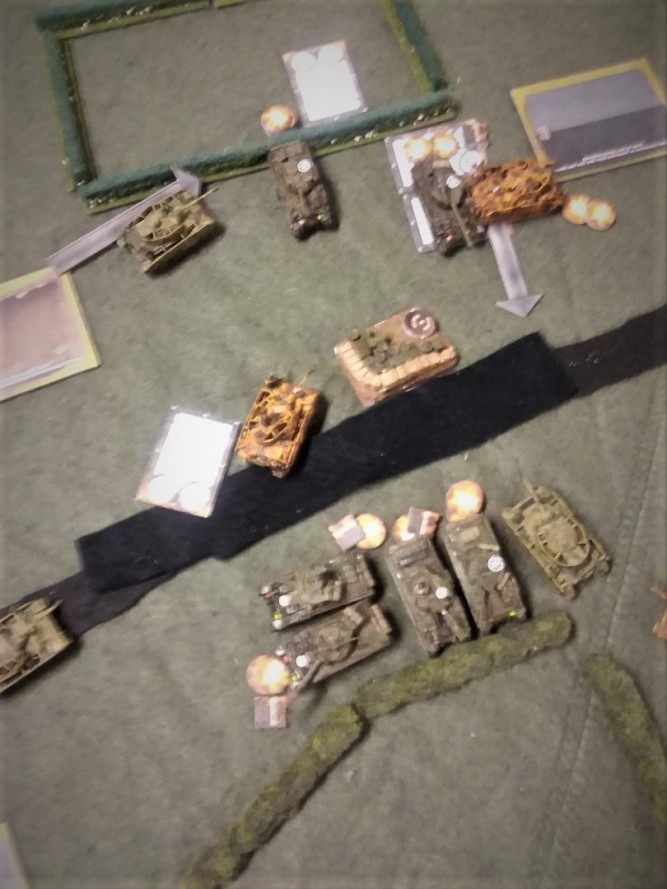 The game was effectively over at that point, except for dice. The Canadians had two problems - staying alive and keeping the Germans from dominating the objective for two out of the remaining 5 turns. The lack of cover near the objective meant speed was their only defense, and for the Germans, it meant sitting still and taking their lumps (if necessary) so they could reroll attack dice.

Firefly 1-4 was sacrificed on Turn 4, becoming a wreck and leading us to question whether a bailed tank contested the objective. We decided it did. Turn 5 also saw the remaining tanks of Troop B wrecked. Leaving one live Sherman V from Troop A and a badly worn Firefly. Turn 4 saw the two remaining tanks wrecked. The Germans didn't lose a tank, thanks to a blaze of luck on turn 3.

What can you say about luck? Losing three tanks and having a fourth crippled (had a busted track that couldn't be fixed) in six throws of the dice is pretty painful. The British Shermans aren't as well protected as the Americans (which must be M4A3 stats, I'm guessing) having only 4 hits points for the base model and 5 for the Firefly. The solution for the poor initiative and weak hit value is generic adds, and dropping a tank to achieve same which we'll explore another time.

Having an initiative advantage with a flock of (relatively cheap) tanks is pretty nasty, but not likely to work against heavies or 'smarter' tanks.