Tanks! Battle in the Scrapyard

DA's approach was different than mine, since we both now realized that the 'attacker' could control the fuel dump objective from a position behind the building, blocked by the bocage. Lacking a recce tank, the Canadians spread out to put fire into all three objectives on Turn 2. 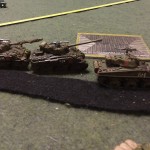 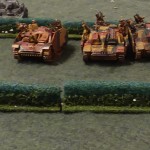 As we heard last episode, friends, this is a rematch with roles reversed - DA's Canadians now attacking from the opposite side of the table. Same forces 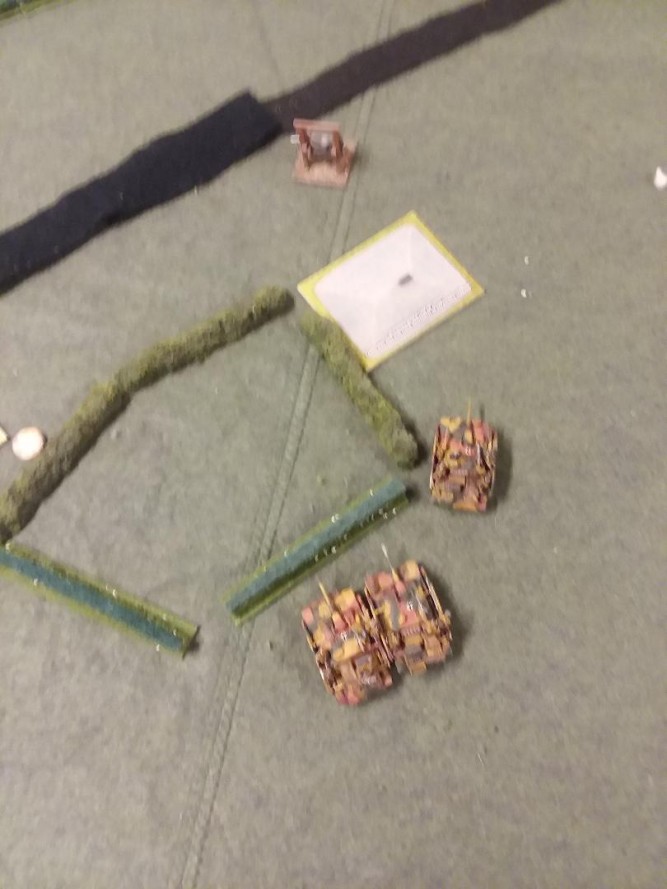 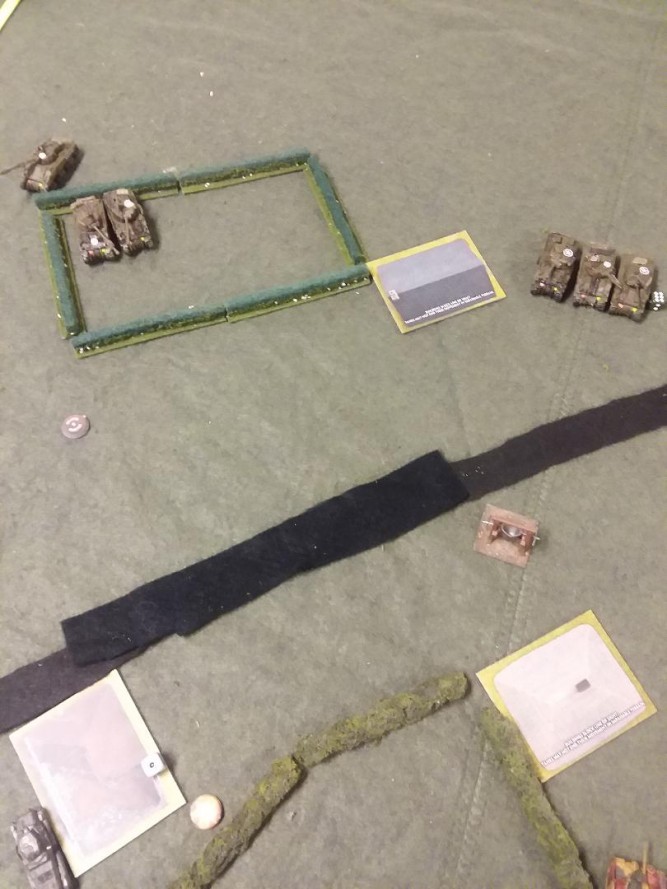 Shermans on the move, Turn 1

The result was some scattered fire on turn 1. The MKIV and the distant Firefly traded shots and a StuG engaged a Sherman V. The Sherman V suffered a bailed casualty. Things got ugly when it failed to remount. 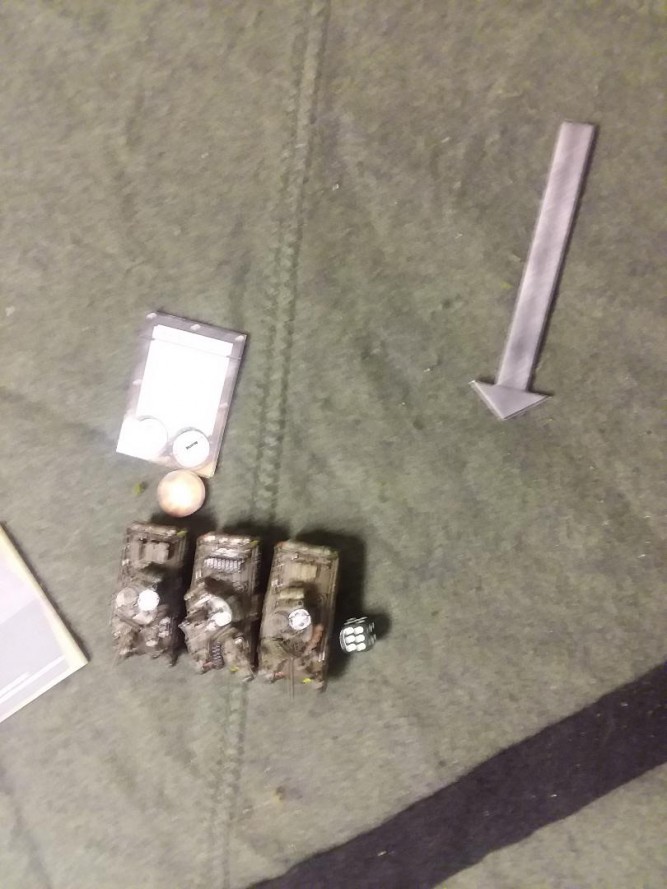 On turn 2 the objectives go live. The Germans focus on the pair of Sherman V's attempting to contest the soup kettle, while the Canadians split fire between the STG contesting the soup kettle and the STG helping contest the fuel dump. 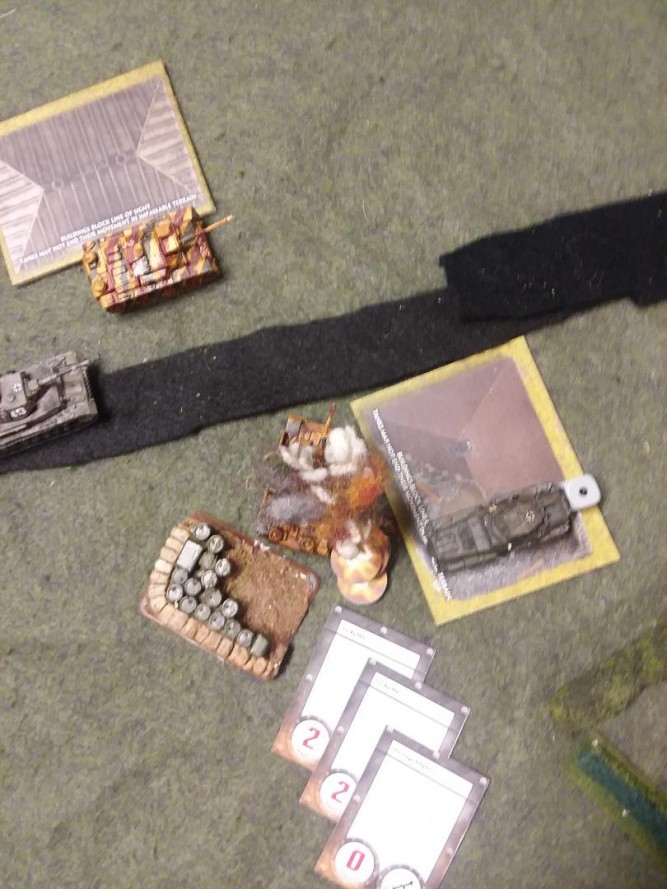 Because the Canadians are the attacker, the only German vehicle allowed to shoot first is the Puma. The Puma scores one damage on a Sherman V. The Shermans now concentrate on their two targets, but mutual movement nerfs the Sherman V fire against the STUG controlling the Soup Kettle. The Fireflies convincingly obliterate the STUG but the third one, with a free shot, tries and misses the Puma who is merely rolling 6 defensive dice (3 move, 2 Sherman move, 1 cover plus 1 recon minus 1 flanked) 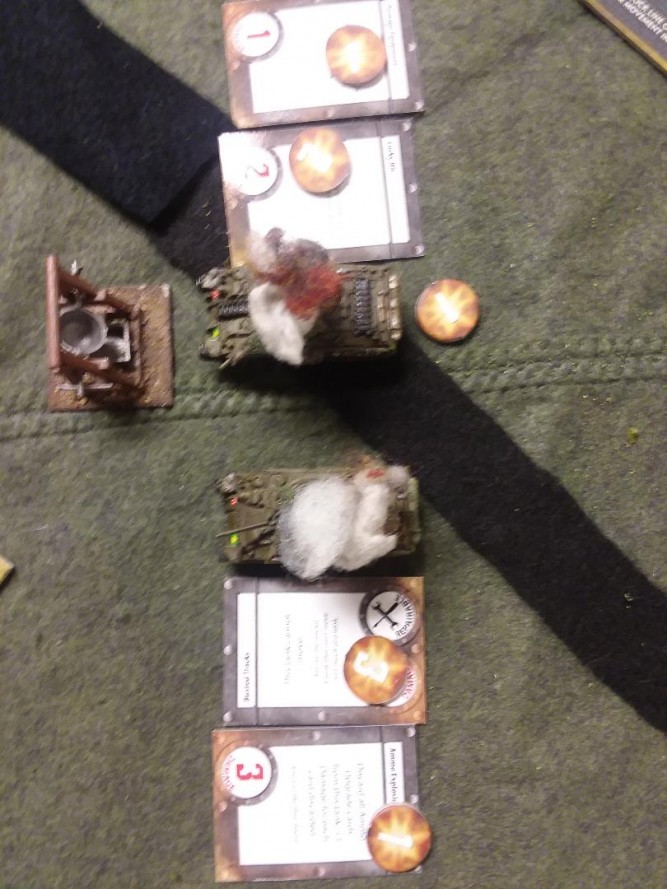 Death ride of Sherman Vs

The Germans now got to shoot back. The hammered STG had two optics hits which kept it from getting 'final fury', However, the five remaining vehicles smashed both Sherman V's thanks to 3 of them being stationary. Two rolls of 1 hit in four dice were converted to 3 hits. An ammo explosion put one Sherman V away and a lucky hit did in the other. 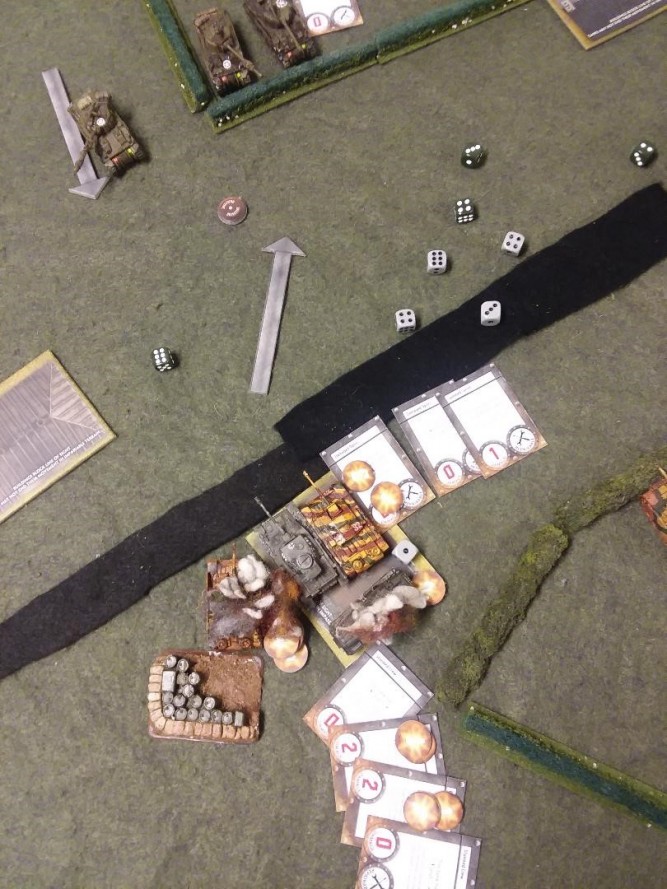 I made a huge mistake with the Puma this turn. I put the remaining STUG by the fuel dump and the MKIV into the wrecked building ala Kelly's Heroes thus blocking the Fireflies (I thought) from shooting at the Puma. Not so when we measured the Firefly. Next, convinced only the surviving Sherman V could shoot, I sat still, relying on his movement to give me a pretty good chance of survival, and improving my Puma's shot. The Puma shot first, and scored a hit on the Sherman V.

Then the Sherman replied. The Sherman V returned the complement on the Puma, getting one hit and an optics hit as well. Then the stationary Firefly rolled 5 dice to 2, with the results as shown. The only good news was that left only 2 Fireflies shooting at the MKIV and the StuG contesting the fuel dump. It took both Fireflies to destroy the StuG, and as we used to say in the golden age of pinball, the Canadians were out of quarters. 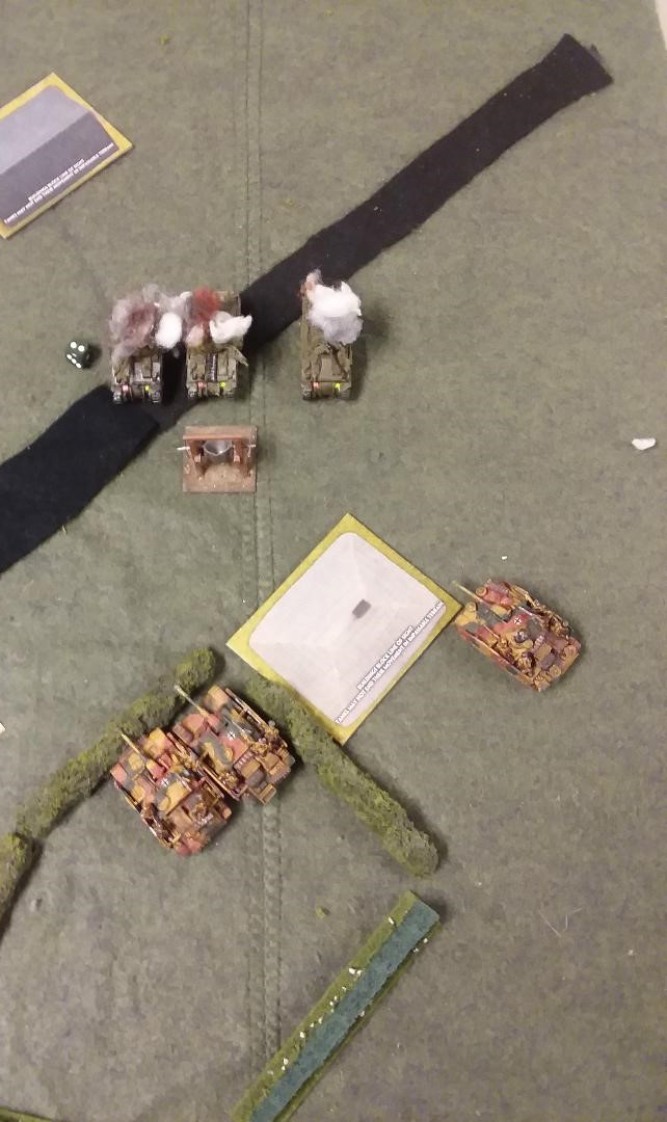 Last of the Mohicans (Sherman Vs)

The game was effectively over at that point, but we rolled dice to see what happened to the last of the Sherman V's. Three STUGs were sufficient to finish it (remember it had 2 hits at this point), allowing an ineffective STUG final fury and the MKIV to inflict some damage on one of the Fireflies

HOT WASH
#1 could have used this guy here.
#2 the scenario is biased to the side that has quick access to the odd objective. Not sure, having played it twice, that it's ideal
#3 we'll have to try it with minefields so other time. Perhaps that balances it.

From a play standpoint, I think the lucky hit on the Sherman V on turn 1 was the game breaker. The Germans had barely enough firepower to wreck two Sherman V's on Turn 2. If that doesn't happen, we would have go into 'extra innings.'