Tanks! Battle in the Scrapyard 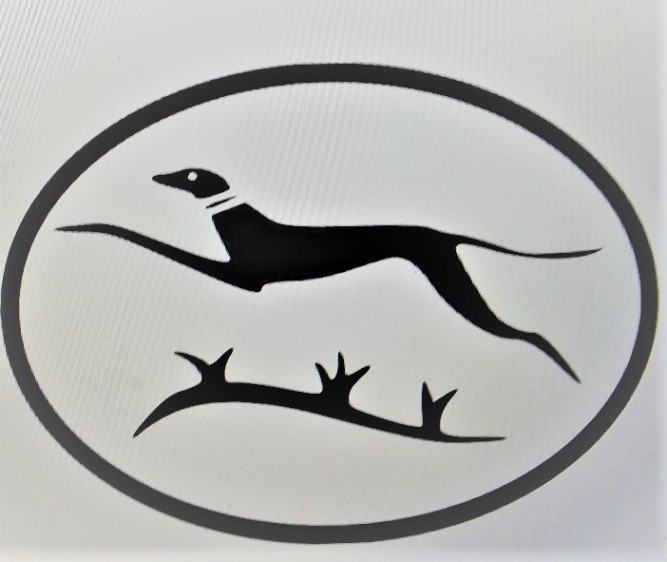 Tanks! played with the STGs this time (with a couple of different tanks to make the numbers come out) facing 3 Sherman V and 3 Firefly.

Typical panzerjager battery, with a MKIV command group. To make the points come out right, a Puma (not in picture) took the place of the second MKIV 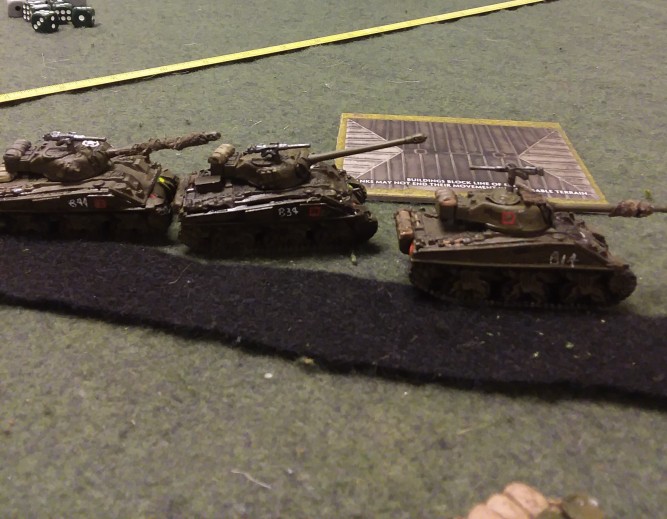 Hill 112 Antagonists - Die Schweine, or at least some of them

The British force was from the Gary Horse again, 3 Sherman Vs and these three Fireflies

End of turn 1. The Puma is contesting the soup kettle but no points are scored on turn 1

Turn 1 saw the lead Firefly and one STG trade fire ineffectually. The Puma contributed its own shots but didn't hit either; hard to hit when you are adding three dice for your movement to two dice for his. 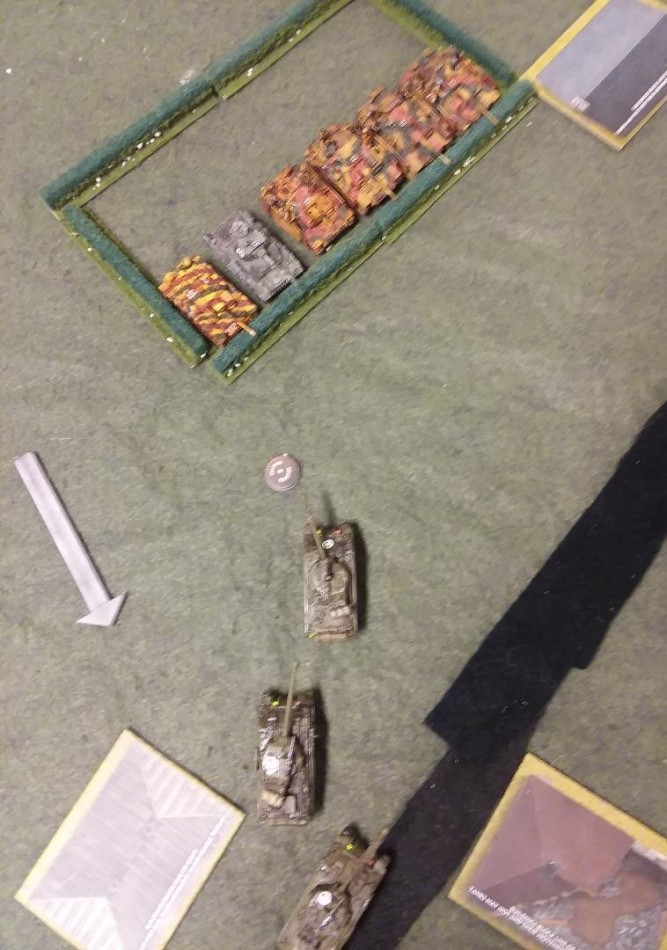 Turn 2. Discovering that the STG and MKIV contest the dot marked objective, the Fireflies move forward to contest but only one reaches contesting position

Movement sequence reminder - the Germans get a 'blitzkrieg' move in their repair phase. Then movement occurs in Initiative order - in this case the STGs because their IN=3, then the Shermans, then the MKIV (because the Germans 'attacked') and then the Puma.

The Shermans had to commit to contest the objective after the STGs lined up. The MKIV moved into the line after the Shermans were in place. And finally 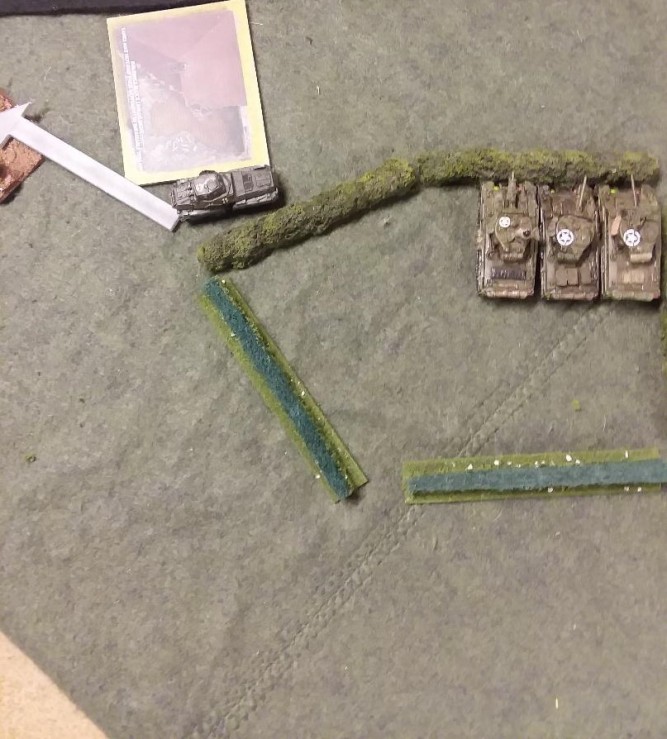 Moving last, the Puma gambles and moves to control the fuel dump

The Puma's reach allowed it to slide between the building and the bocage. After some discussion about bocage rules, the lefthand Sherman V moved over to take a shot at the Puma. DA didn't realize he had to touch a side to shoot through the bocage 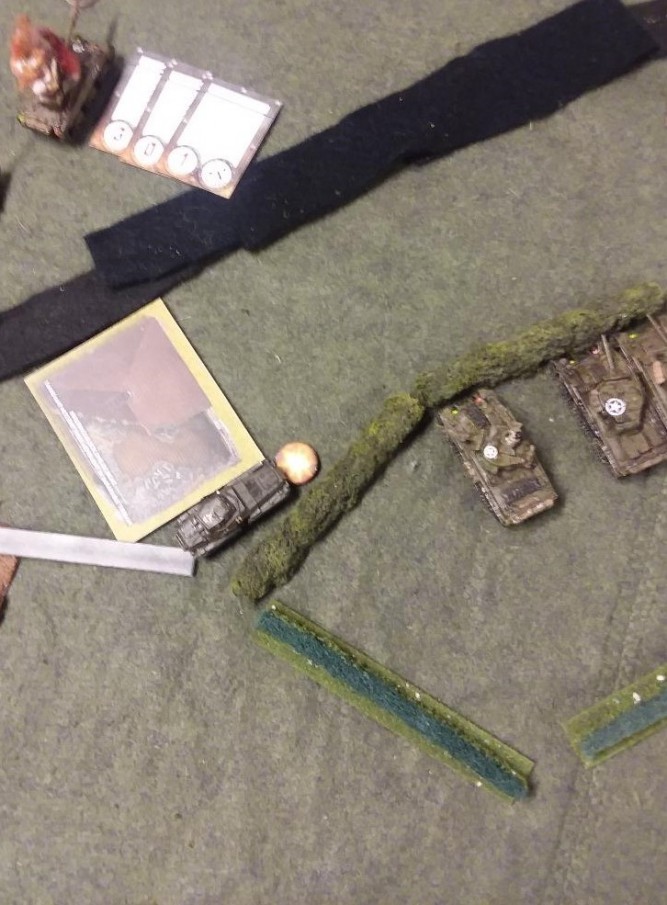 End of turn 2 - scratch one Firefly

The Puma and MKIV shot first. The Puma attacked with 4 dice against the Sherman V scoring no hits (not a surprise - opposed by 4 defense dice thanks to the Puma's movement, but the Sherman's return was one hit on a fragile 3-hit vehicle. The MKIV put one hit on the Firefly close to the objective. The return fire from two Fireflies and two Sherman V damaged the STG contesting the objective for 2 hits.

Then five STGs lit up the Firefly contesting the objective for a total of 5 more hits including an ammo explosion and three other criticals. The STGs were aided by three of them being entitled to reroll under stationary firing thanks to blitzing into firing positions.

The Axis controlled two objectives and the Brits controlled one. The Brits would have to control 2 to the Axis 1 in the next turn to stay in the game. 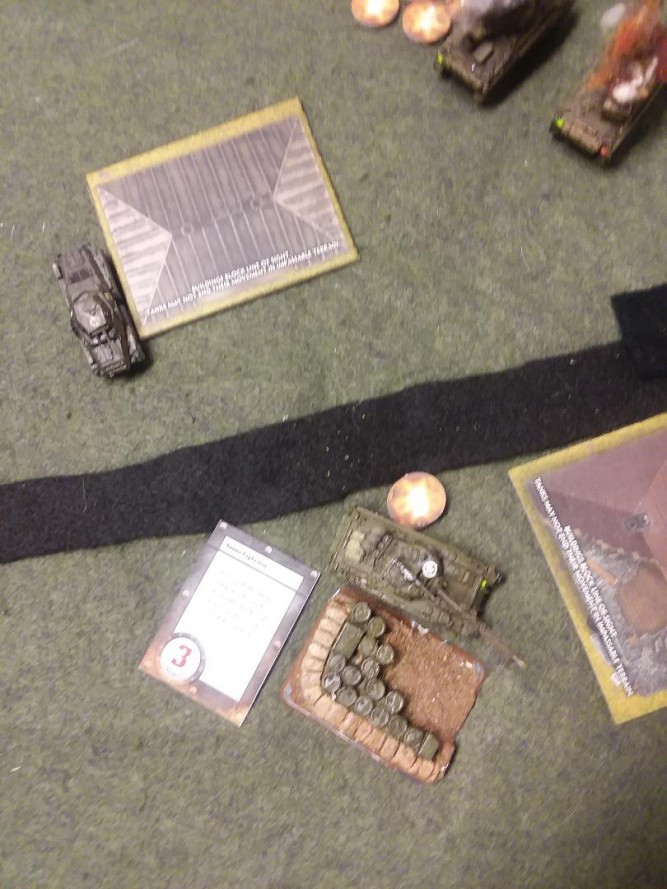 End of a Firefly

Turn 3 didn't go well. One Firefly contested each objective in reach, and one Sherman V maneuvered to allow two Sherman V to be in contest distance of the soup kettle.

The Puma caused an ammo explosion in this Firefly, and flanking fire put two more hits in it. The final fury eventually caused one more hit on the Puma, who's double move was amplified by cover+recon to four defense dice. The MKIV started things rolling on the other Firefly by a stunned critical hit and 1 damage. Then the Shermans worked over the MKIV, destroying it and adding two more damage to the STG III that was contesting the objective at center court. Close but not close enough. The three remaining STGs, all rerolling, destroyed the last Firefly. Final score, 3-2 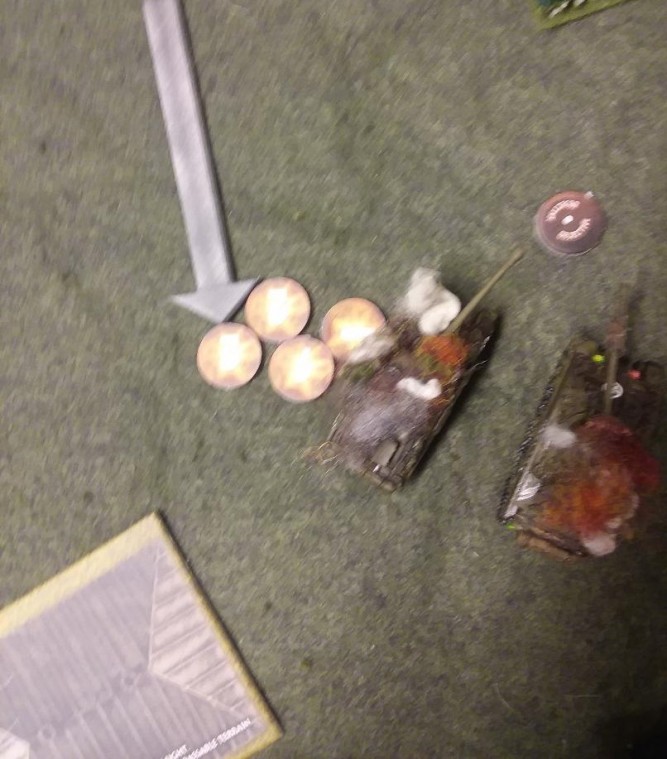 A hail of fire destroys the other Firefly

The scenario itself forces a quick resolution. The attacker should be able to get control of the defender-placed objective on Turn 2 so the defender is forced to maneuver to at least match. Then it turns into a slugfest

What about play? The first outing of the Puma showed it as a trick unit, able to sneak around and score an unguarded objective. That's one of those tricks that seldom works more than once. (Nobody leaves an objective unguarded after that).

The game was the first time I saw semi-indirect fire employed, and it worked to change a '3' (miss) into a '6' (critical hit that helped kill the MKIV). (It also failed in another shot). Had the UK made more use of it, it might have turned the game, but in a scenario that forces maneuver, the best way is to use a couple tanks as a base of fire. This game didn't last long enough for it to matter.

The way the Fireflies were constricted into a column approach to the objective by hiding on the first turn probably was the cause of the defeat. The lead Firefly blocked one the trailing Fireflies and so not all available dice flew at the same time. And, of course, arriving at the objective with one tank to contest each turn made choosing targets easy.

In the end, we decided this game went by so fast we played another, reversing fields with the Canadians starting in the upper corner and the STGs on the lower end of the table. This time the Canadians would attack.