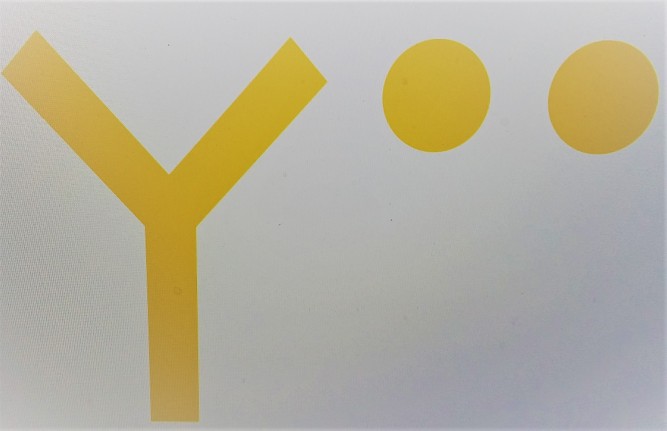 The Dives River is one of many north south rivers blocking movement in the Normandy campaign. Escaping Germans needed a bridge and the 9th Panzer was assigned the mission of getting one back from the Canadians, and equally important, keeping the Canadians at arms length from retreating troops.

4th Canadian Armored had entered combat in July and was involved in the British attempts to close the Falaise pocket. The troop consists of 2 Sherman Vs and a Firefly. The represented unit is the Governor General's Foot Guards, 21st Armoured Regiment

And a word from our sponsor to amateur photographers everywhere: make sure of your background!

We were playing in my basement and the junk piled up is me getting ready for Saturday's coming tournament.

The Game was Tanks! again, an short window of opportunity and therefore a small game. The Canadians were defending, which theoretically played to their wonder power - semi-indirect fire. 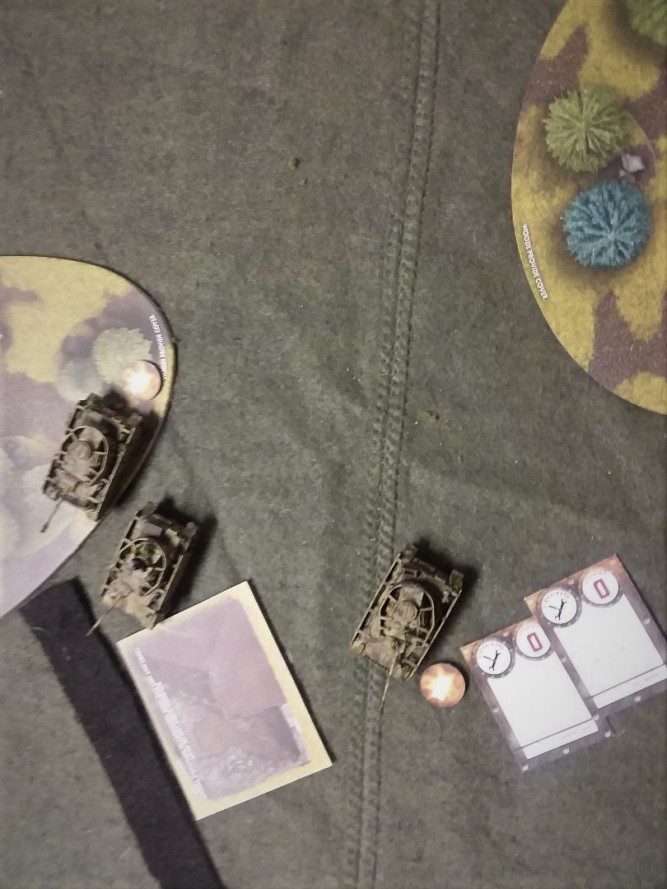 The results of overthinking the problem

Very nearly lost the game in the first turn. Semi-indirect fire combines with being stationary in an unobvious way, and in previous games the Shermans had to move. So we didn't see much. The attacker rolls his dice, if not satisfied, rerolls. Then, he applies his wonderpower and picks one of the dice up and rolls it again. I contrived to eliminate one of the Sherman Vs from the shooting by positioning my tanks in field of view of only two. Missed COMPLETELY. Then DA shot 4 dice from the Sherman V and landed 3 then rerolled 1 for four hits. Fortunately I pulled a 6 and two other defensive successes. 1 hit. Next the Firefly repeated the process with five dice and got two critical hits and 3 normal hits. I stopped a normal hit, and the only reason the MKIV survived is that the criticals were zero damage. But the MKIV was stunned and shellshocked. Can't imagine why. 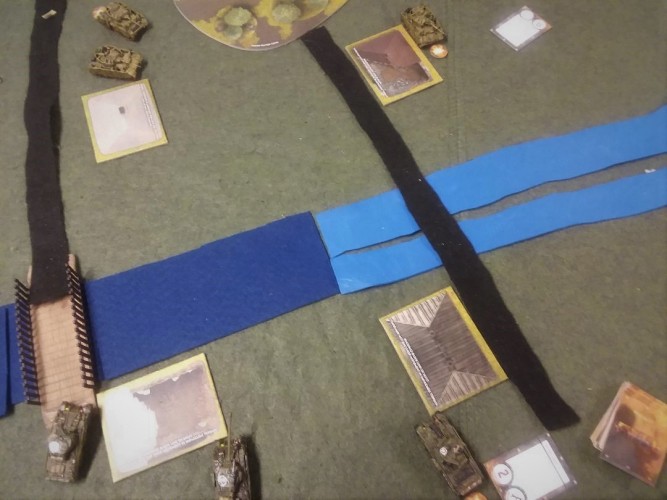 Getting cagey and getting lucky: Turn 4

Things were not off to a good start. With two criticals on MKIV #3 I rolled to clear the 'stunned' result because it affects shooting. Success! but the tank is still shell-shocked, initiative zero. So I hid it by blitzing to see if I could draw Sherman out of cover, and when DA stood on a pat hand, moved my other two tanks well to the left of picture, placing them so that only one Sherman could shoot, and maximizing my defense dice. This time it was my turn for luck; the second MKIV shot caused engine damage (2 point critical) as well as one other hit. Sherman Vs only have 4 DP so that was a hurting puppy. 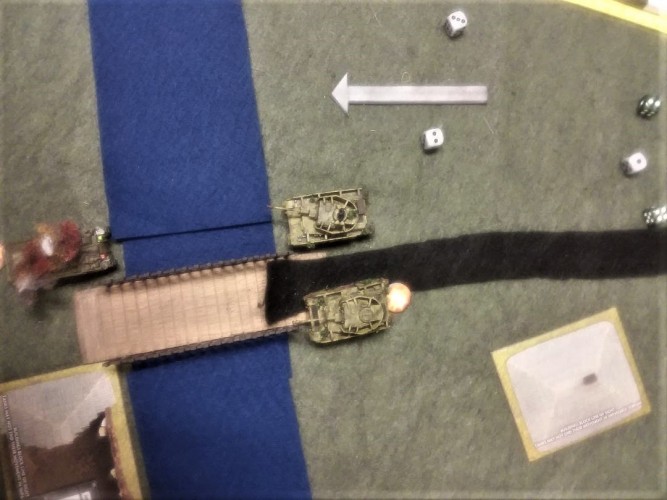 Showdown at the Dives bridge

It was turn 5 and if I don't contest on turn 5. So it's pretty obvious that at least one tank is going to the bridge. Remember that the Canadians must move first, other than my shellshocked MKIV, which is ahead of everyone else (yes, the turkey failed to roll off the shellshock despite hiding for a turn). I push everything in the blitz phase, and this forces DA to react by moving all his tanks - a Sherman V to contest, a Sherman V to counter an apparent move over the ford by my damaged MK IV, and the Firefly to peak around the corner.

The Firefly is out of the above picture, and when the shooting was done it's movement combined with mine nurfed its shot on my platoon leader. My two tanks wrecked the Canadian platoon leader's Sherman V and he got one revenge hit in his final fury. 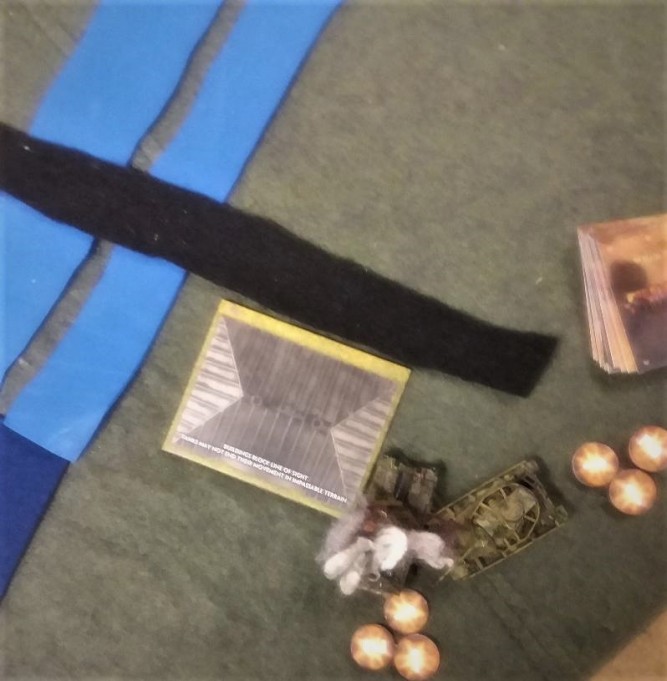 A battle...full of sound and fury, signifying nothing

Meanwhile, what was happening on the other end of the field? I charged the ford, hoping to distract both tanks with my lame duck, sort of like the kildeer who trails its wing to protect its young. My MKIV ended up bailed in the middle of the ford. It then had to chose between shell shocked and bailed, and again managed to clear its worst problem. Now, however, it has 3 hits. For two turns it skirmished with the Sherman V while the real fighting was elsewhere, neither able to produce a result, until finally I logged the final hit on the Sherman V. Who promptly turned around and put the 4th hit on the MKIV, and added insult to injury by pulling a bail result out of the critical deck. MKIV#3 never moved again

while two tanks are beating each other to death, DA had to bring his Firefly to contest distance and out in the open. This changed the shooting issue. In the above picture, you can't see the MKIV off the bottom, also in contest distance, but not in close range.

My fire was 4 dice vs 4 dice and 4 dice vs 5 dice. The platoon leader (pictured) got one hit and the tank off the bottom got 1 hit and 1 critical which turned into the (frequently) deadly engine fire. DA rolled it off later. 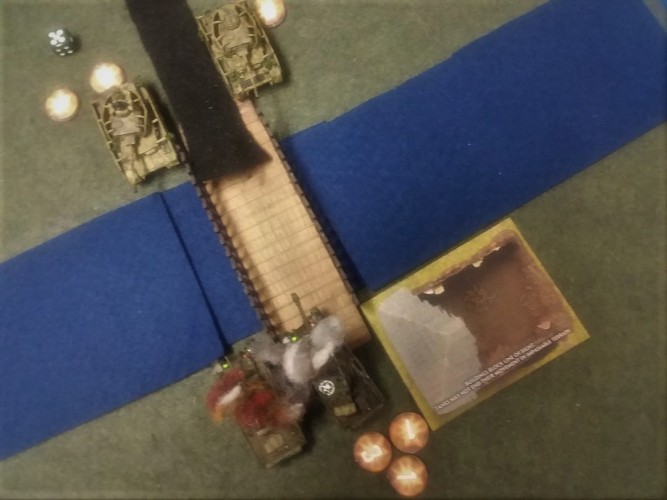 Turn 8 was essentially a repeat of turn 7, but my 1 dice advantage (4 vs 4 -1 short range) produced one hit apiece, ending the Firefly and technically winning the game. But DA got a final fury and narrowly missed killing my platoon leader's tank. So I finished with 4 DP between three tanks.

HOT WASH
The most important point here is that if British Shermans can sit still for a while, they are pretty nasty. Your opponent gets at most 2 defense dice plus one for cover, plus his armor, and that means that medium tanks typically roll 4 averaging 2 defensive successes. Because you can pick up a dice and reroll it, you average 2.5, and because you already get to reroll a poor roll, your average probably is close to 3. Painful

The solution for the opponent is to avoid being shot at by the entire enemy force, and sometimes even that is not enough. Fortunately the scenario forced DA to come out into the open e.g. move, and the luck evened itself out.

Even so a narrow victory.