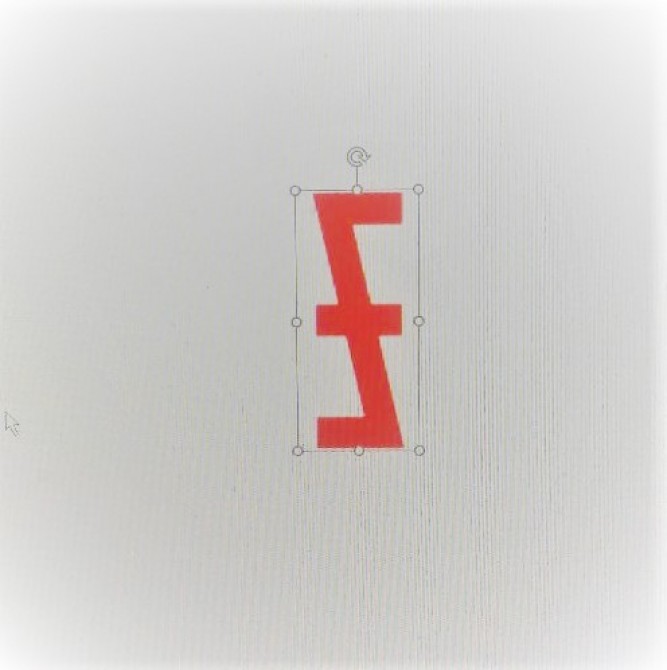 This is the last of the three battles I played Saturday. My force remains the same, but this time I faced the Destroyer (hereafter TDH) and his Tank Destroyers, based on a 99th Division rifle company.

We both chose all-out attack and ended up in Free-for-All. 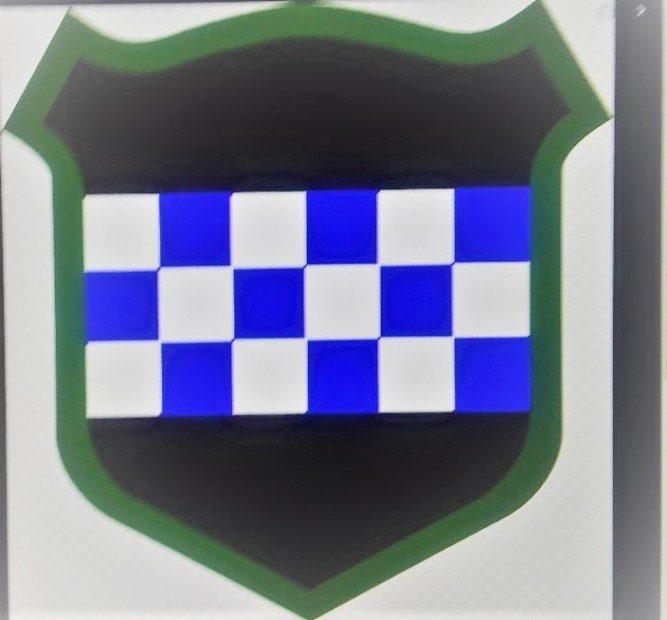 My force had the same number of platoons as TDH, so it took at least 30 minutes to deploy. One of the reasons I hate Free-For-All in a timed game.

We were also playing on a sculpted board, with a stream running across it. One end is noticeably higher than the other, making set-up looking for terrain and LOS even more difficult.

I got the nod for 'attacker' and put the low end of the board to my right.

I ended up deploying the FK40s in a position to dominate the far bank of the river. They could reach to TDH's baseline in direct fire mode, and thus, without realizing it, I forced TDH to place his mechanized elements on the other end of the battlefield. They were to support an infantry assault over the river, as were the Stummels. As it turned out, that attack didn't materialize and so these units, as well as the HQ for the Panzer company were largely wasted.

My mortars and Stukas went to center court, where they were joined later by two MKIV platoons.
And the picture below shows my right flank force hunkered down in the fields, waiting to go or defend. 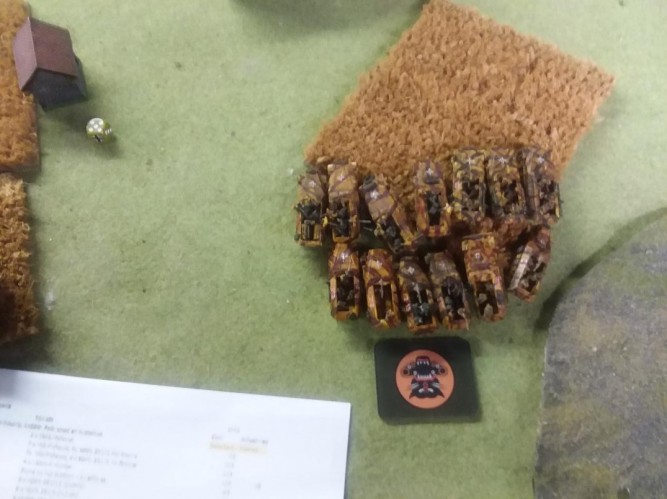 TDH deployed his TDs on my right, supported by 81mm mortars and 57mm AT. An infantry platoon held the center, protecting his Calliopes. 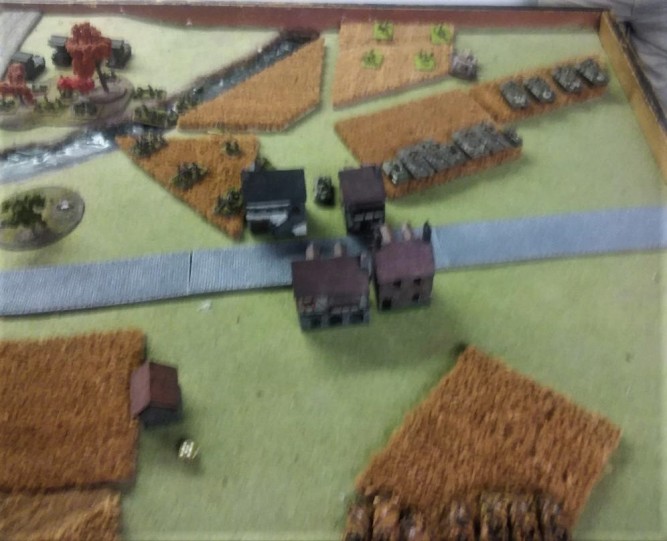 TDH's forces opposite my left were an infantry platoon, an armored recon patrol, and the HMG platoon 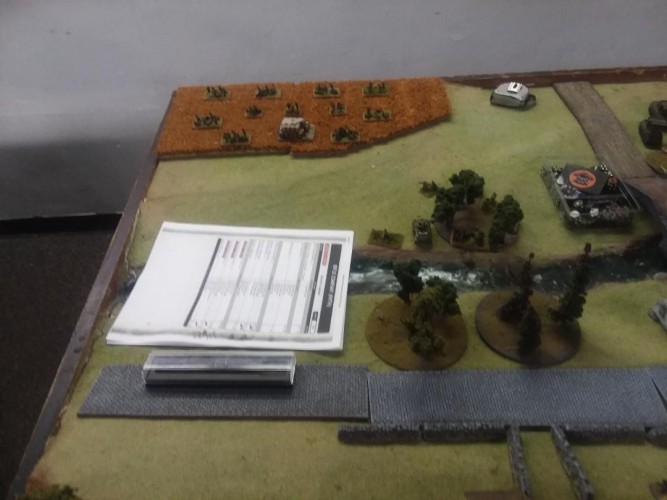 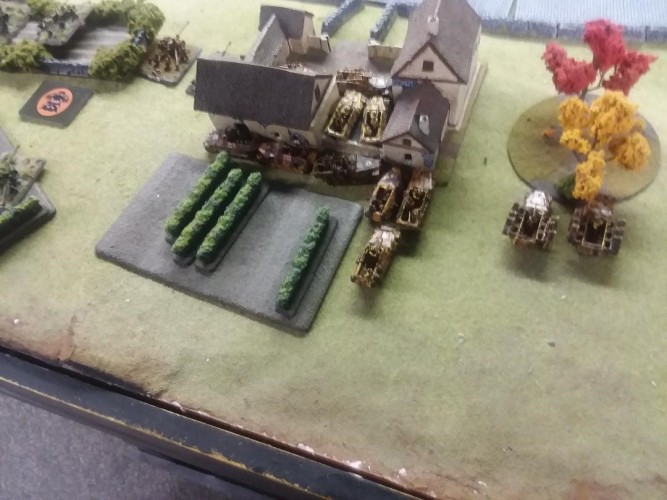 Panzer grenadiers and Stummels crowded into a French farmhouse

Naturally enough, having set up so that TDH would take the first move, I got the first move. Once again smoke would be of limited use and I couldn't bombard. So my Turn 1 was relatively quick, repositioning my two MKIV platoons to deal with TDH's TDs while I moved my 2nd Platoon up on the left, and pushed my Flamtracks and 15MM forward on the right. The summation of my first turn was a pin on the 57mm with one gun destroyed and the destruction of an M20 scout car on the left. 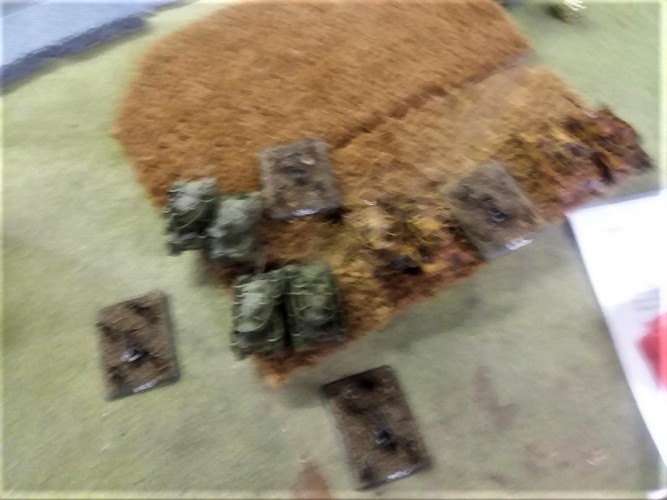 The ground literally trembles as 8 MKIVs roll forward to line the crest in the field, allowing them unimpeded views

TDH went after my halftracks with a vengeance, and killed both tracks and my XO in the field despite them being concealed gone to ground and long range. 16 dice will do that for you. His recon patrol also destroyed one of the Flamtracks. Calliopes hammered the FK40s (surprise) who unpinned with the help of the MKIVs 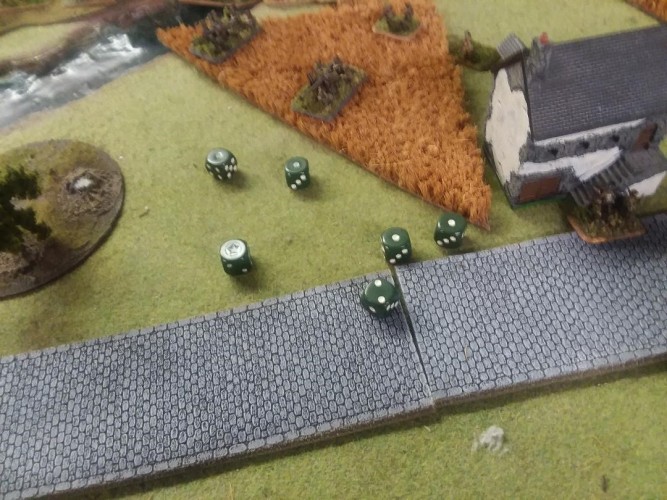 I retaliated by dropping the Stukas on top of the entire TD force. It was pretty ugly, as I managed to hit 7 TDs and TDH lost 3 to Stukas. My MKIVs accounted for 1. But in contrast the Flamtracks merely manage to toast another 57mm and missed the rifle company headquarters entirely.

Meanwhile my left flank was still hindered by terrain, and I failed to kill any of his HMGs, making an infantry assault impossible (HMGs are still ROF 3 in the old Armory) 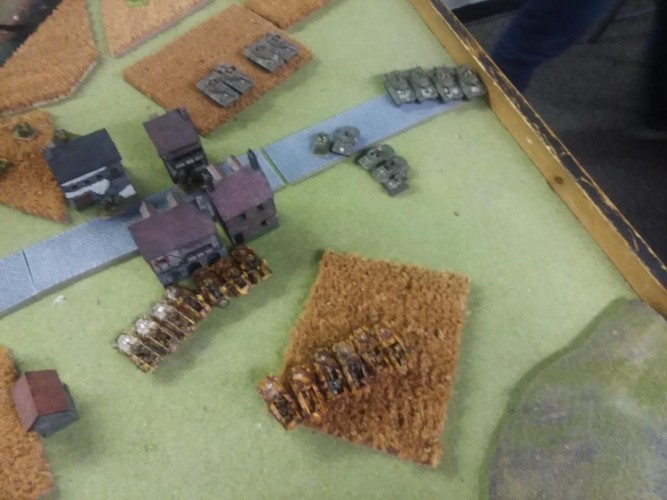 Shooting gallery just before my halftracks start blowing up 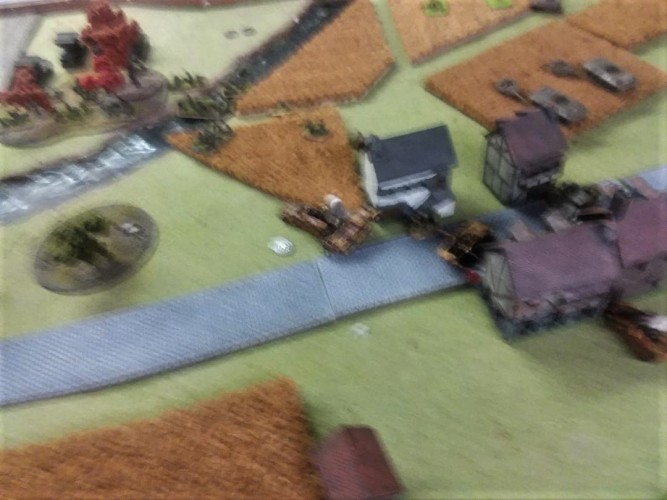 TDH is very adroit at using .50 cal MG and piled onto my Flamtracks with them from a couple recon vehicles and two of his surviving M10s. He finished them off by a quick assault from the company HQ. Meanwhile other recon vehicles and two M10s lit up my transport and 15mm, destroying them all. TDH now had 3 VP from casualties.

I retaliated with more Stukas and 16 shots from my MKIV. The M10s vanish in balls of fire. But my attack to the left remains stalled as I can't chew up the HMGs. 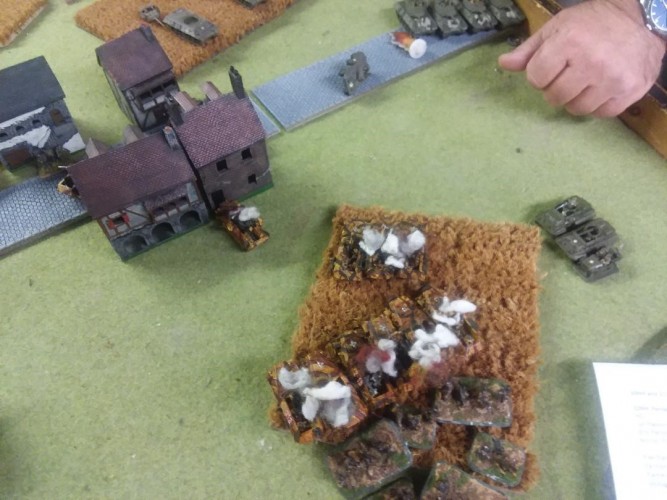 Valley of the Burning Halftracks

With the end of my Turn 3, it was obvious TDH couldn't take an objective, and the other members of the tournament were standing around waiting for us to finish. I did some mental gymanstics and decided I couldn't take an objective either, because the MKIVs were too far from either of the objectives on TDH's side of the table. Rather than point grub, I offered TFH a 3-2 draw and he accepted. Game over

HOT WASH
The main lesson here is about being clear in your objectives and time management. We only played 3 turns and might have squeezed in 1 1/2 more, but I hadn't achieved the breakthrough necessary to burn the MKIVs from center court to the objective. So diverting my Flamtracks to kill his HQ unit was wasted effort and ultimately cost me the unit that would have gutted the 57mm battery. Then a tactical move by No.2 platoon MKIVs would have allowed them to assault survivors of the 57mm and with followup have moved 18" and the next move would have pushed them into assault distance of the objective and its 81mm defenders. Having failed to maintain focus, I put myself into the position of being unable to close the deal. In a one-off game with no serious time limit, different story, but in a Free For All in a Time Limit tournament, always keep your eye on the clock