17th SS Panzer Grenadier Division was, like many of the higher-numbered SS units, raised from unusual sources - in this case, French volunteers and Rumanian Germans. Few members of its cadre were experienced combat soldiers. As a Volksdeutche unit it was not particularly high on the list of Herr Himmler's priorities for new equipment. Organized in October 1943 as an infantry division, by February 43 it had received no vehicles and thus was not better off than the 116th Panzer Division, which was at least cadred by veterans of 16th Panzer Grenadier Division and 24th Panzer and had 'modern' equipment. By March of '44 the Division still had 2 infantry battalions riding bicycles. The Division's trucks were a logisticians' nightmare, and it is likely that the halftracks that should have been present were understrength and confined to the Aufklarung battalion and the No. 1 companies of 1st battalions of the 37th and 38th SS Panzer Grenadier Regiments. When it marched to Normandy it had no tanks, but the 17th SS Abteilung had been issued 42 JG PZ IV (also known as STG IV). The Panzerjager Abteilung was probably using Marders.

Thus I felt the 'Windhund' command card appropriately represents this green, and polygut unit. It fought hard, but was not in the caliber of 1SS/2SS/12SS. 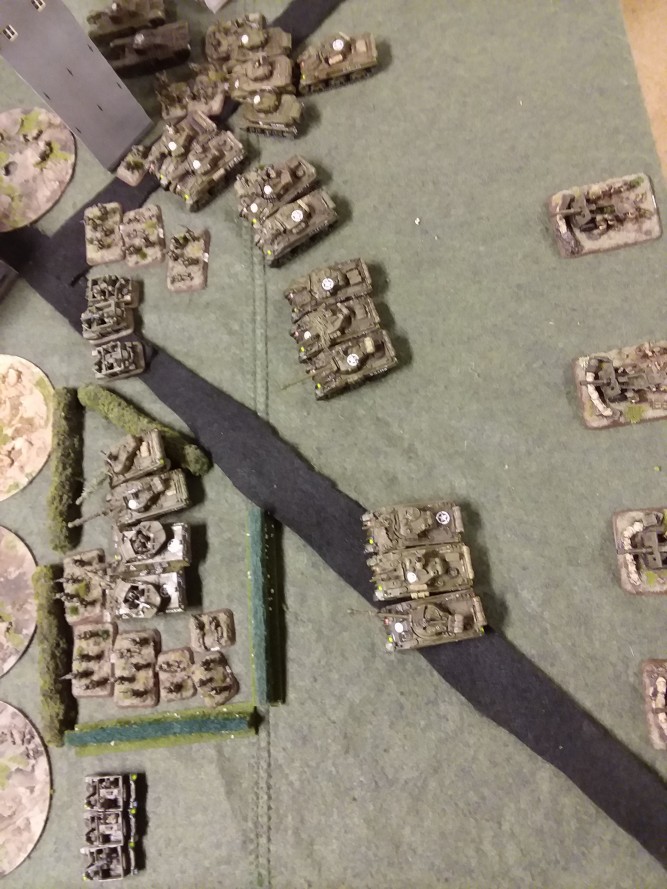 This game was conceived as practice for the upcoming MASTERs tournament in USA. The requirement was for a UK heavy armored formation to face an armored panzer grenadier company.

Thus, it was a standard NO RETREAT scenario and the forces were designed to function in multiple scenarios rather than a specific environment. It also had a time limit.

The UK force was based around a British armored squadron with Stuarts, and black box support from Churchills, a rifle platoon, and a motor platoon. General support included 2 carrier patrols (one with Bois) and 25 pounders. In retrospect there should have been more tubes. Completely different game if a second battery is available. 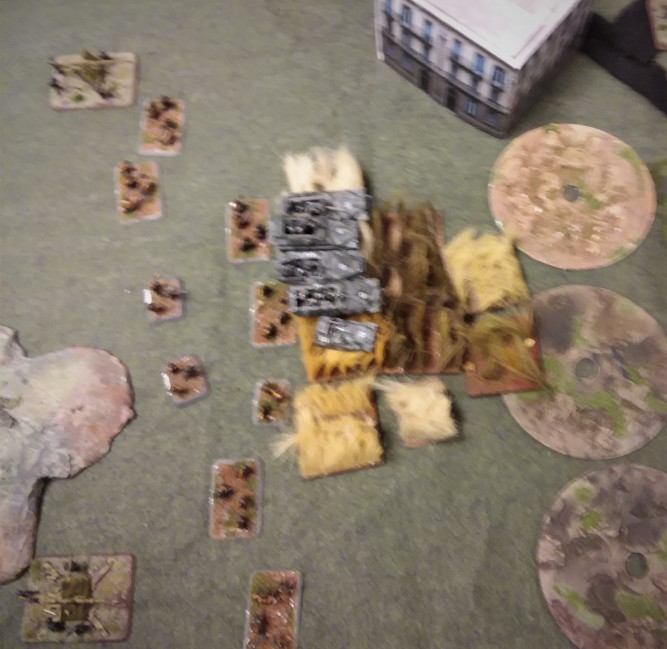 The important German units. The German on-table force included the PAK Front 88s, the 7.5cm PAK40s in ambush, and 2 infantry platoons, the HQ, Stummel 7.5cm tracks and mortar tracks. The STGs were in reserve

The Canadians decided to rush the 17th SS right flank. For that reason, and my stupidity when taking pictures, the rest of the table is not shown. The other panzer grenadier platoon was holding the left flank, and the Stummels and mortars were positioned in the center. 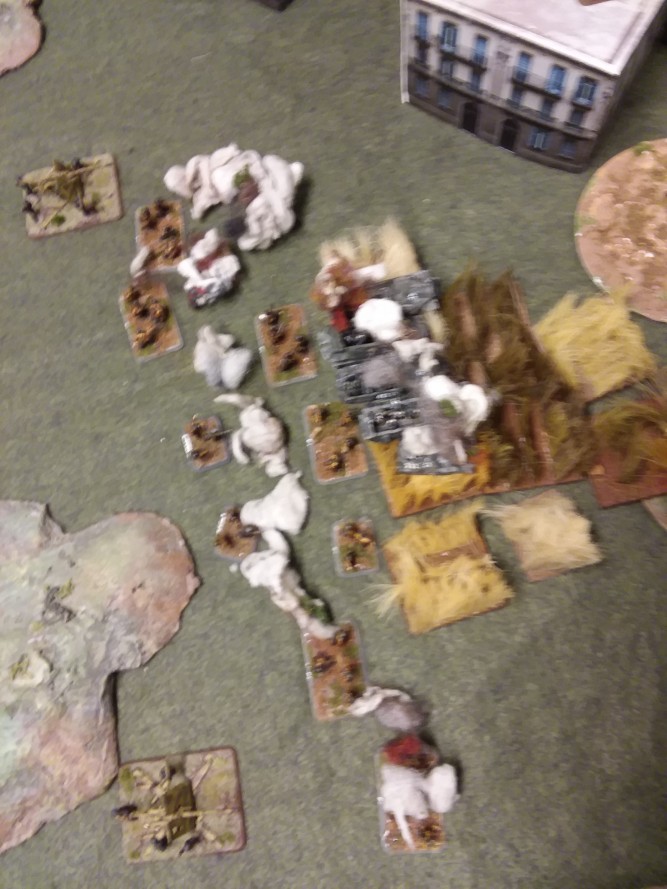 The Canadian attack consisted of dropping a smokescreen to block the German AT and ambush and a quick advance into the minefields and town. The barrage of AT from 11 Shermans and 4 M10s obliterated the halftracks and the smokescreen made a response to the infantry in the minefields problematic. The Germans managed to drop some mortars on the British rifle platoon, but didn't kill anyone and no one died in the minefields 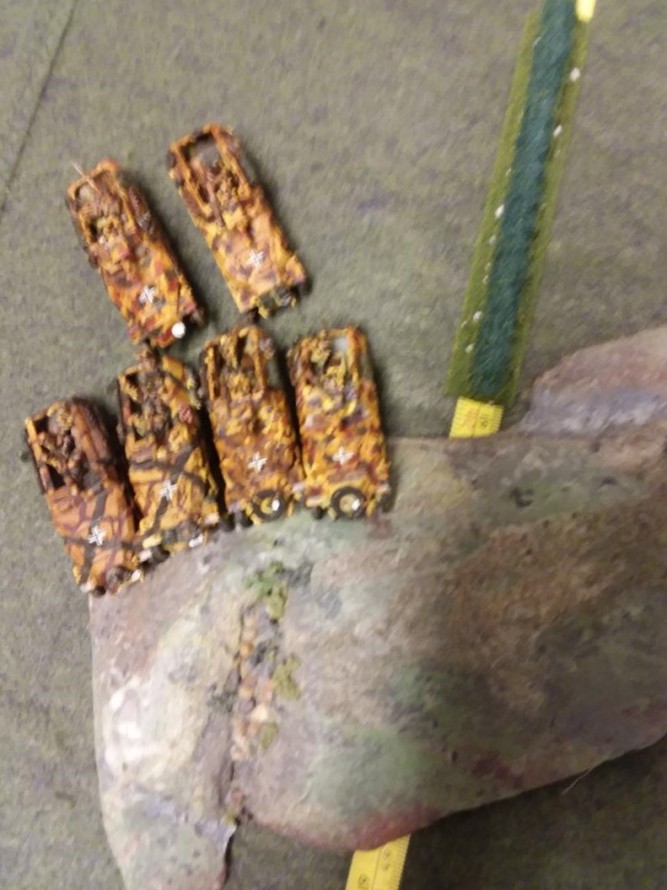 The downside of the heavily loaded Canadian attack was that the Germans could reinforce their right. The up side was two of the 88s in the PAKFRONT could not participate. 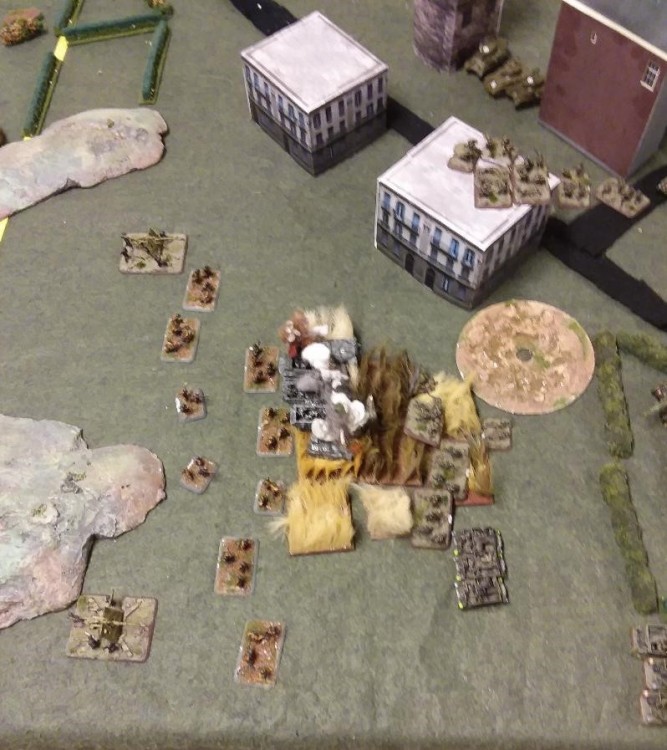 Canadian 2nd Turn - 25 pounders repeat bombardment, hit the 88, and fail the double firepower but pick up three stands of panzergrenadiers

Canadian 2nd turn saw the infantry platoons advance to the supporting positions and try to use their 50mm mortars. The artillery failed to get rid of the 88, and supporting fire from a variety of tanks does no good either (UK really misses semi-indirect fire).

Despite a brilliant start, the attack may bog down 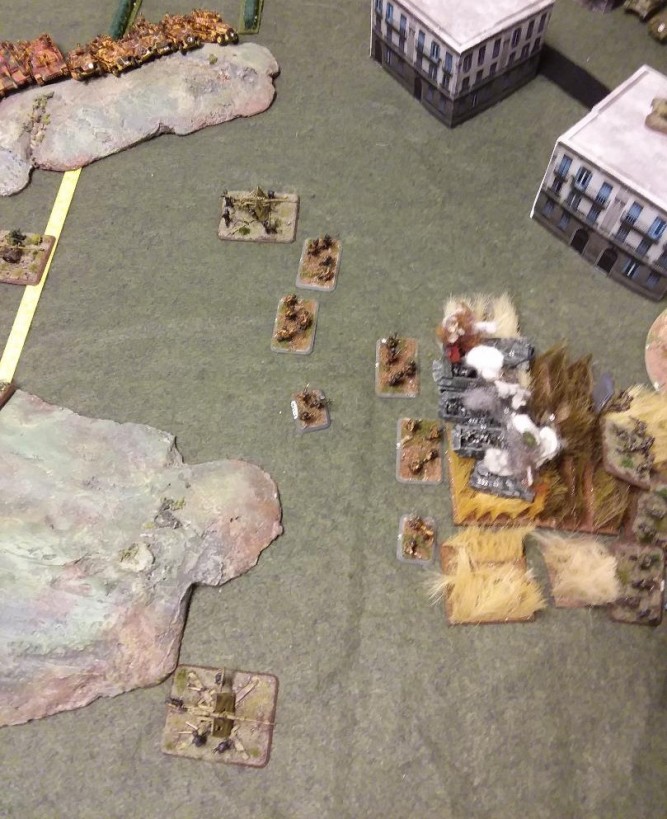 The Germans now dropped the ambush, and the STGs began to filter in from reserve. The Germans assembled an execution squad on the two hills, and massed fired destroyed the M10 platoon and a Sherman V. A carrier bailed. 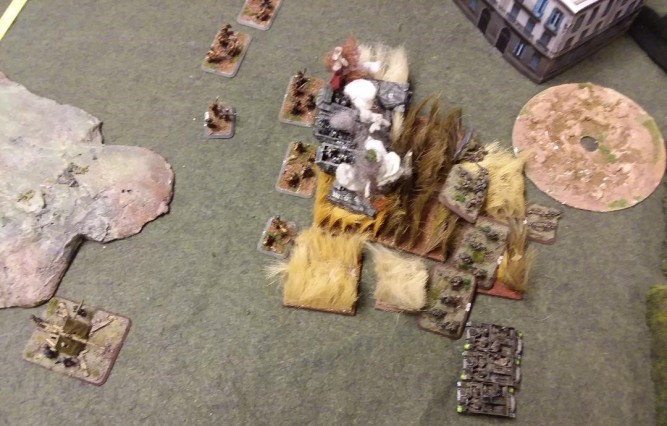 Canadians last chance for a win

The Canadians had two alternatives - dig in the infantry and reposition the armor to run around the left flank, where they would need not contend with the PAK 40s. A look at the clock denied the opportunity to try the other flank. That left driving on. The Canadians move their infantry into the shelter of the wrecked halftracks, shifted artillery to the Pak40s, and concentrated every tank cannon that would bear on the two 88s while using the 3 Fireflies to pound the STGs on the hill.

The hail of fire succeeded in getting hits on the remaining PzGren, pinning the HQ and the infantry, but sadly no joy in killing the 88. The Canadians could not buy a firepower (or double firepower) to save their lives. Counting possible shooters put the infantry assault at high risk (9 infantry dice + 1 88 dice) and it would only move the Canadians into contest distance of the objective. The Canadians backed down. 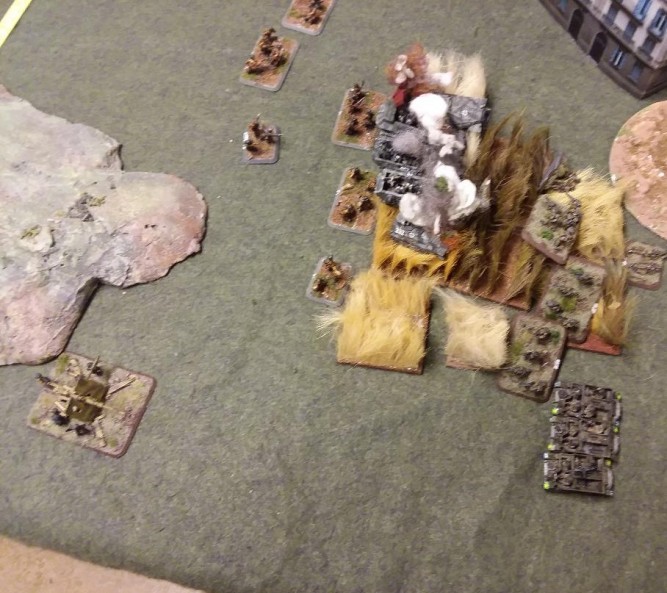 By Turn 4 the German antitank array facing the Canadian attack had grown to 8 STGs, 6 Stummels, 4 PAK 40s, and 2 88's. The Canadians dug in their infantry and dared the Germans to attack them and clear the Motor Platoon from 'contest' distance. A turn of desultory firing ensued as the Germans and Canadians tried to get a point, but the range proved too long for effective fire, and the clock finally ran out. Neither side lost a platoon

Hot Wash
(got lost first posting, thanks for the prod)

The Canadians probably should have maintained a threat against the German left flank. The concentration of fire should have produced better results but there were tanks standing around doing nothing. The German PAK Front is an awesome tool currently, but replace the three Churchills with Crocodiles (coming soon to a theater near you, I imagine) and this battle is completely different. Two smoke capable units are essential for attacking a German defensive list.

The Germans lacked the punch to chase the Canadians away from the objective. There was just enough distance between the hill where the STGs lurked and the Canadian forlorn hope to ensure a volley of tank fire killed or bailed two STGs. With two stands gone from the defending PG platoon it was too weak to risk a possibly game-ending assault (forced to retreat 6"...the Canadians consolidate toward the objective. They start their own turn contesting and swarm the PzG in the open starting 4" out) That's why the Germans declined to force the Motor Platoon back. Both sides had an enormous amount of firepower....