This battle was between myself (Playing as American) and Steve Payne (Playing my Germans). Steve is currently assembling his first army and to assist him in learning how it will work I gladly switched sides.

After setting up our forces and the table we started the game with myself having my Company HQ, my M4(76) platoon, my Stuart platoon, and my M7 Priest battery and Steve having his Company HQ, his Tigers, and his Flak 8.8s. He opted to place his AA in ambush.

Turn 1…
Steve set his 4 tanks in the woods on the hill and his ambush was nowhere to be seen. I started on on my deployment line and after not receiving any re-inforcements, advanced as far as possible which left my M4(75)s out of range but my M4(76)s able to fire. My Shermans let loose as did my artillery to no effect. Steve’s response was more effective killing 1 M4(76) and bailing 1.

Turn 2…
I was not able to remount my tank but the other one was able to continue the fight. I didn’t get any reinforcements and this is where my grand plans hit a serious snag. As I moved forward with my available units the stream proved to be more than it looked. My Stuarts failed their checks and stayed on the near side of the stream. My M4(76) moved forward for a better shot. My XO couldn’t get pass the stream. My commander got to the far side of the stream and the one bright star was the artillery stayed put so they could fire. As in the first turn all of my shooting caused nothing more than scraped paint!

Steve, on the other hand, had better results with his plans. He sprung his ambush in the forward woods and my artillery caused him some concern so he attempted to move his tanks from under the impact area. One Tiger threw a track but the others moved forward into better positions. His fire was more effective also. When the smoke cleared my CDR was bailed along with a M7. The functional M4(76) and my XO were killed leaving my Stuarts to contemplate their future.

Turn 3…
I GOT REINFORCEMENTS!! So I started the turn trying to gather enough forces to force some Steve back some. The last M4(76) remounted but went straight towards the rear. My CDR and the M7 remounted and my M10s arrived. As I tried to press Steve my Stuarts again failed to get a chance to move and since they didn’t have the AP to do any damage where they were, they just had to hope that Steve didn’t look their way. The M10s moved forward as did the CDR. One of the M10s stopped in the woods and after all of the available firing saw no damage to the Germans.

Steve continued his successful operations without any help from his reinforcement pool when his Tigers did as they did in turn 2 (1 stayed in the woods with a thrown track and the other moving onto the bridge to get better shots). His Pz IVs remained stationary to provide supporting fires. His Tiger killed my CDR, his CDR killed a M7, his XO bailed a M10, and his 8.8s got way too excited and rolled a lot of one!

The damage was done, my force was down to the Stuart platoon, the artillery, the M10s, and my Armored Infantry off the table. Without my CDR I had to yield the battlefield to Steve for a 1 to 8 loss.

Good game but I will come back!! 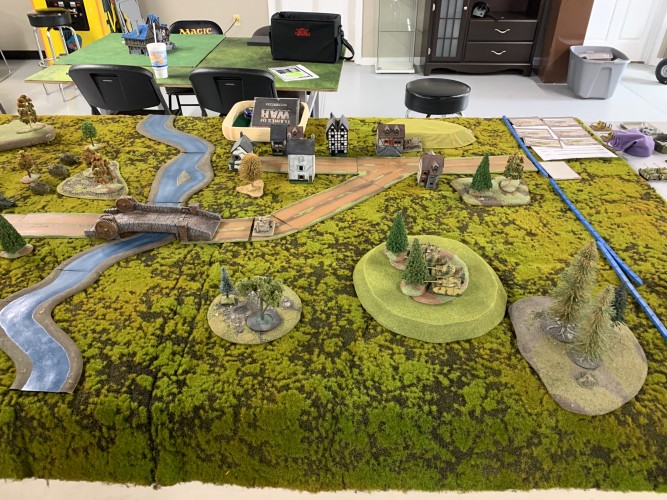 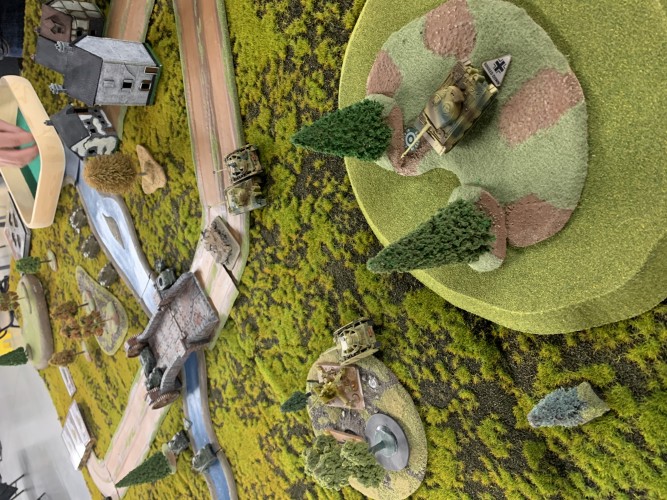 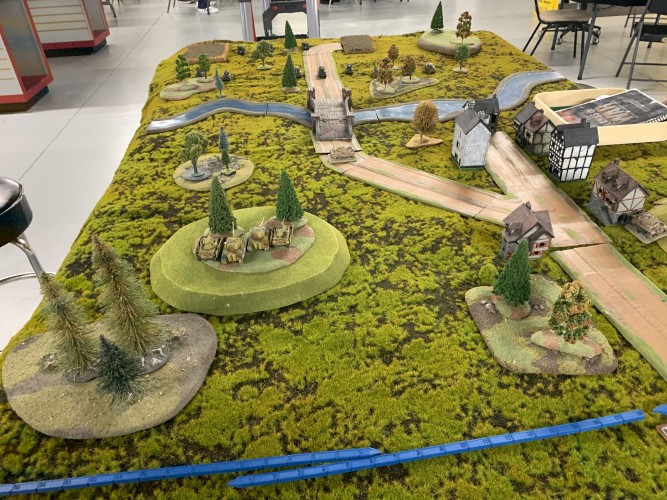 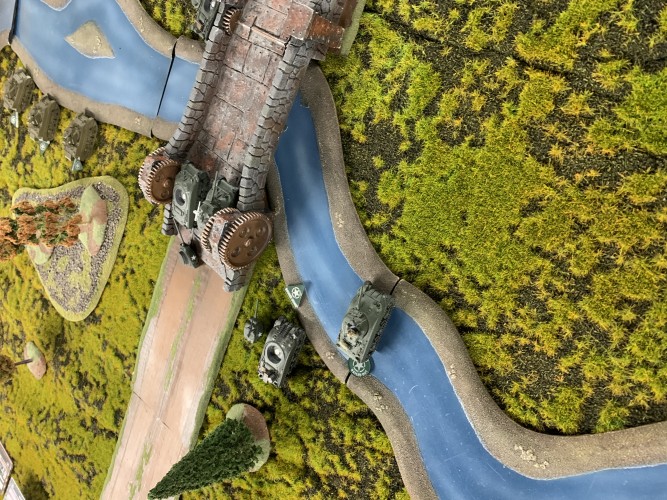