Captain Yates reporting on training mission to British Army.
After our success in the fighting around Alencon, my company was requested to train the British prior to their next offensive. Unfortunately, they must have lost their cricket game yesterday, because they sent a Churchill heavy assault tank company to face my light tank company! So much for British sportsmanship.
The umpires were rather unimaginative, having us just line up facing each other across a plain broken by several farms and low rises.
My plan was severely constrained by my lack of heavy anti tank weapons, basically just four tank destroyers and any support the USAAF designed to give me. With nearly add many heavy tanks on the opposing side as I had light tanks, my plan would have to rely on the attached armored infantry to clear the objective and win. Meanwhile, my light tanks would attempt to ambush the Churchill tanks at point blank range and skirmish to buy time for the infantry.
The plan came unhinged right at the start. The British armoured cars found an unexpected route forward for the heavy tanks, putting them right up in my grille at the start. My cavalry support was outclassed, as their attempt to find a forward ambush position for the tank destroyers simply left them exposed.
Here I must admit to complacency. I was so certain that the British would be slow and ponderous that I let them get the jump on me. Their tanks are well armored, so I was focused on finding a good flanking position for my M10 tank destroyers. Too focused as it turned out when the platoon radioed in that the umpires had awarded the British their complete destruction before we even knew they were there. It was a disheartening blow.
That left my only hope of victory being a fast strike on my left where the British had left a rather exposed rifle platoon as their entire flank guard. Putting in a request for immediate air support, I ordered the armored rifles forward under cover of a smoke screen, supported by the attached light tank platoon and all available artillery.
Their set up for their assault was good, but i think the lieutenant has become overly cautious after their disastrous experience in the steam crossing near Argentan. He paused too long before assaulting, allowing the enemy to reinforce their flank with Sherman tanks and start bringing Churchill assault tanks across as well. By the time he actually put the assault in, the opportunity had passed. The British had recovered from the artillery bombardment and had strong tank support.
While I have complained about the infantry’s performance, I must admit my light tanks did little more than make the British burn some gasoline. On my right flank i had my two platoons skirmish, trying to hold off the British heavy tanks. Although I barely scratched their paintwork, they soon got bored of chasing my light tanks through the vineyard and wandered off.
At that point I ordered one platoon to follow me on a jaunt across the battlefield to harass their other rifle platoon, while the other platoon dealt to the British armoured cars that were getting a little bold.
They succeeded in their task, although the armoured cars were rather stubborn about admitting defeat. Unfortunately, this aggressive stance distracted the platoon from the threat from the nearby Churchills, resulting in their destruction.
My own foray was slightly more successful, although I am alarmed at the ability of well handled heavy tanks to keep up with my light tanks in tactical moves.
In the end, i was comprehensively defeated.
Result 1:8 victory to Rob Sadler. 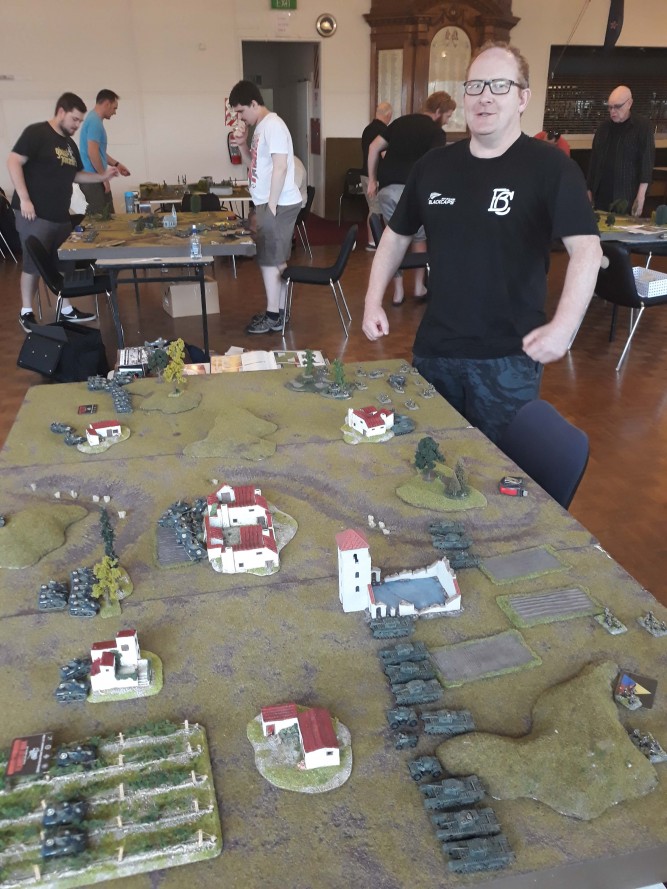 1 Person Has Recommended Phil Yates For a Commendation