Assault on the beach

Rangers arrived under heavy fire from a bunker set back over a hill. Infantry squads and Panzers emerged from the left flank… the waters soon turned red.

Turn 1: Confusion
The landing crafts dropped a couple of ranger squads in both flanks. Sgt. Gutierrez was leading the northern group and First Sgt. Emerson commanded the south squad. Captain Yablonsky arrived with a couple of Sherman tanks right in the middle next to a support squad with a .30 cal. They were soon welcomed by heavy fire coming from the bunker. MG’s and howitzers bombarded the beach and took down one of the Shermans! Sgt. Emerson and Captain Yablonsky found themselves taking cover right away near the anti-tank obstacles. The Germans were lead by some captain (I don’t remember his name). He moved the infantry down the hill and through the center of the field. The allied aerial bombardment had been unsuccessful but left a few blast holes in which the germans took cover.
By the end of the first turn, the allies had lost one man and a Sherman.

Turn 2: The Plan
Captain Yablonsky desides to split his platoon in two. First Sgt. Emerson’s squad and his squad, will move in to secure the southern objective. From there, they had line of sight to the German infantry approaching from the middle. The other two squads (Sgt. Gutierrez and Staff Sgt. Michels) will take control of the northern objective. It was at this time that another Sherman joined the battle but the fun didn’t last long… The other Sherman moved in towards the north and landed on a mine zone! The Sherman had to be abandoned. The Germans rained down some artillery strikes and machine gun fire on Sgt. Gutierrez’s squad. The squad took heavy casualties but they managed to find some cover near the northern objective. Sgt. Michels was shaken by the Sherman’s explosion. They were unable to react during this turn. The remaining Sherman connected a direct hit on one of the Panzers and the crew couldn’t deal with the fire. Later during that turn, they abandoned the tank. By the end of that turn, my US forces had taken cover near the objectives and managed to take down half a squad of regular infantry and one Panzer IV.

Turn 3 and 4: Pinned down
The German infantry moved through the rocks and craters to get a clear shot on the rangers still on the beach. Captain Yablonsky moved his men against the southern hill so that the MG’s on the bunker couldn’t target his men. Instead, the MG’s targeted Sgt. Michel’s but failed to hit! Meanwhile, the remaining Sherman fired on the German Infantry taking a few casualties and the main gun shook a Panzer. The Germans received reinforcements: German grenadiers armed with anti-tank launchers. They sneaked down the northern flank and towards the center. By the end of turn 4, the Germans lost an infantry squad and my US Rangers took only a few casualties on Gutierrez and Emerson’s squads.

Turn 5: Blood in the Sand
The Germans had finally flanked Captain Yablonsky’s squads and hose them down! They took out Captain Yablonsky and all of his men except for a couple of rangers including Sgt. Emerson. He returned fire and was able to kill a few germans firing behind the barbed-wire defense line right in front of them. Sgt. Gutierrez, moved his men towards the center supported by Michel’s squad and that .30 cal the set up over a northern rock formation. They took out half of the German grenadier squad. The other half managed to hit and destroy the remaining Sherman tank! Fortunately, the Sherman on a risky maneuver before it was destroyed, managed to hit and destroy the remaining panzer! By the end of this turn, the German forces were as scattered and beaten as were the US Rangers. The Germans still had their captain and the MG’s inside the bunker were still active and doing serious damage.

Turn 6: Fubar
A few scattered rangers held up tight to the objectives and concentrated fire upon the closest German infantry squads and managed to take out both German squads! The MG’s finally got sights on Emerson and his two men and rained fire on them but couldn’t connect a single hit! The German’s captain was pinned down the turn before and as the smoke from the battle cleared his sight, he saw Emerson’s surviving squad and he had the chance to take them out and claim that position and the objective! But he failed his morale and panicked! The Captain order retreat and his squad ran away from the battlefield. My rangers took that opportunity to find some cover from the MG’s firing from the bunker. The turn ended with a couple of German squads eliminated and a running German captain. The beach was controlled by the allies.

Turn 7-9: Secure Positions.
The remaining German forces were up in the bunker, unable to get line of sight to my US forces. The following turns The Rangers were able to reach the base of the bunker but failed to inflict any damage to the German stronghold. The germans failed to do any more damage on my forces and by the end of turn 9, my US Rangers had control of both objectives with only a handful men remaining. Victory at last! 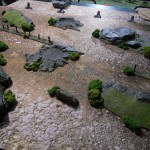 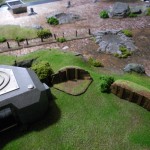 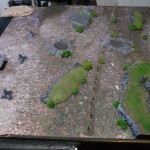 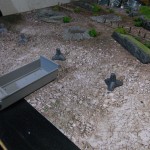 No one has recommended Raydash for commendation. Log in to be the first.