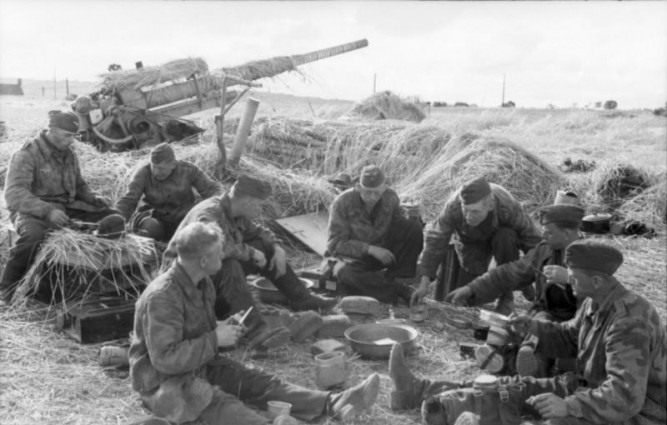 Twenty miles south west of Caen, 3rd Brigade, 51st Highland Division was tasked with probing German defensive lines. Near here the battered remnants of 16. Luftwaffen-Felddivision grouped around a road crossing and took positions in the heights and woods near the road. A small force, mainly from 7th Battalion of 42nd Black Watch, surveyed the enemy position. A battery of dug-in FlaK 36 guns were spread out along the ridge and hedges below. (The PaKfront card was used to dig them in and treat as independent teams). A platoon of StuH 42s were assembled near the center, with infantry nearby. Heavy mortars backed them up on the right flank. 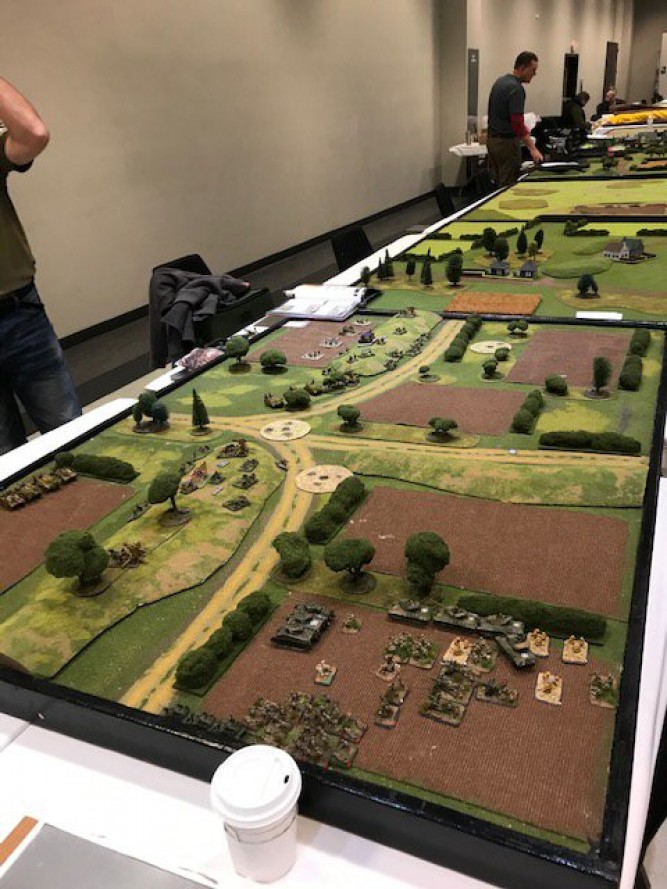 In hopes of minimizing defensive fire, the composite British force drew up cpmpletely on the left, hoping to concentrate it's attack on the ridge directly ahead. A large woods screened their movement from enemy eyes to their right. Ahead only a single FlaK gun andf a few scattereed machinegunners could be seen. Two infantry platoons supported by the company 3" mortars, an anti-tank unit of 6pdrs and a scout carrier platoon moved off first. A tank platoon from 4th Canadian Armoured Brigade took up firing positions, tasked with suppressing the 88mm gun. M10c Tank Destroyers hugged the woods line, ready to fire on enemy reinforcements. 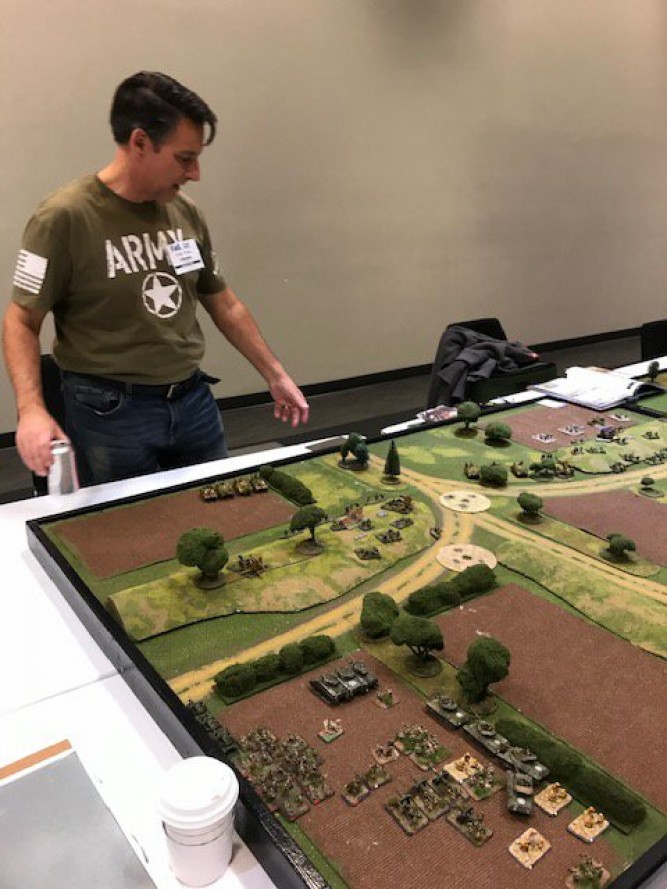 Fire from the armored vehicles, 3" mortars and infantry did little to the enemy gun other than irritate the crew, but in one of the most memorable moments in the campaign, the 2" support mortar from 2nd section drops a bomb right into the gun pit position and detonates the ammunition! (Yes, I hit, he failed, and I confirmed the firepower roll as it was in a gun pit!). 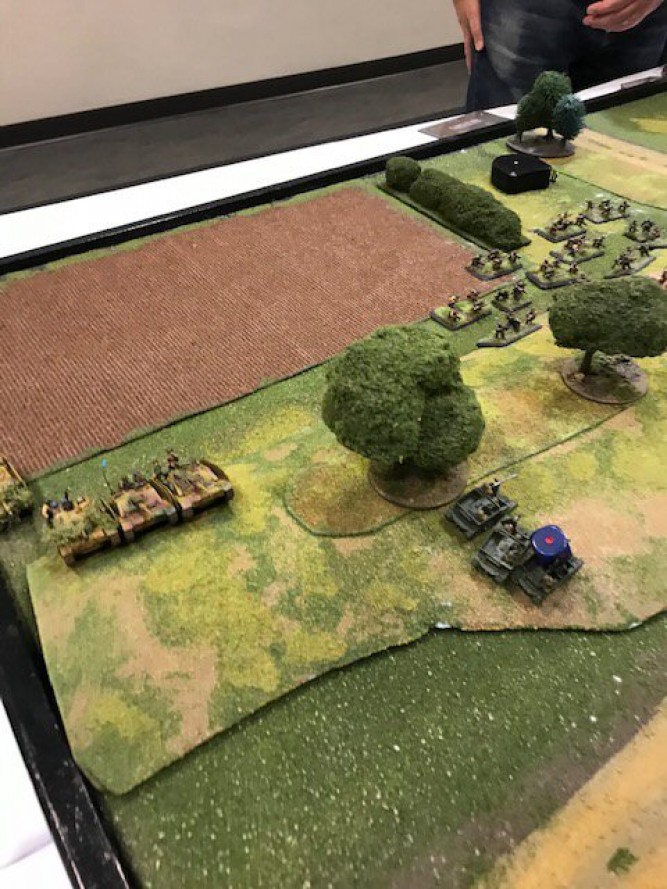 A platoon of StuGs trundle to the ridge top from ambush position but the haze and smoke from the wrecked 88 throw their gunnery off and no kills are recorded, although one Sherman was bailed and another one was a near miss. (Long range and my 5 roll bounced a shot.) The StuGs reposition behind the ridge on a "shoot and scoot" order. 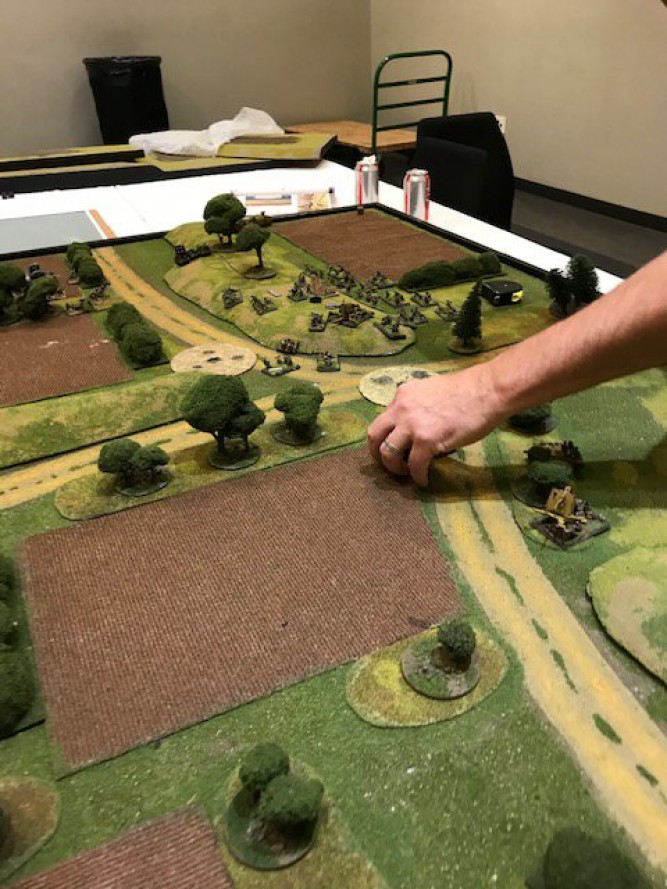 The Sherman remounted and platoon moved forward near the bottom of the ridge. The carrier platoon moved to the ridge to try to suppress the German infantry, which was pounded by the 3" mortars. A lot of ammo was expended with little result other than pinning down the infantry.

With no targets, the German 120mm mortars are withdrawn to help defend another sector. The StuGs re-appear and promptly kill one Sherman and bail a carrier, but miss the dangerous Firefly. (Tied save roll, he failed firepower). The nearest 88mm gun, although pinned, puts a round into the third Sherman, and it erupts in fire! This time the StuGs fail to hide behind the ridge.

Having had enough, ther Firefly retires. Now it's the M10c's big chance, but they totally miss the StuGs!
The 6pdrs try their luck and also miss!! The mortars repeat and pin the infantry again.

The infantry remains pinned down but manage to pin the British 2nd platoon. However, the relentless StuGs
take their time and destroy two M10s, and narrowly miss the carrier platoon but bail one. 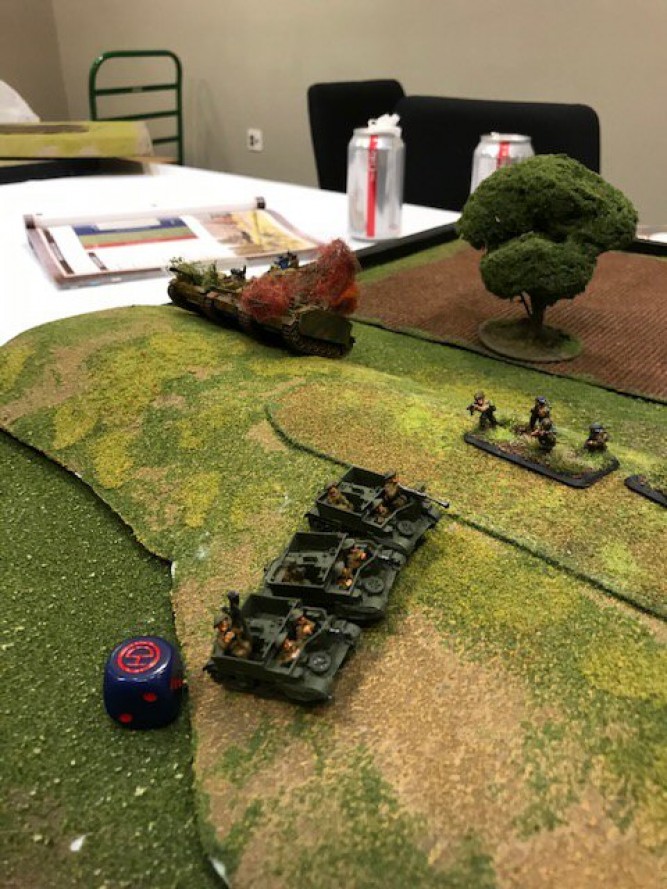 None of the British recover, even though Lt. Baiersford-Tully can be heard over the din of fire trying to inspire them. This time the return fire is a little more accurate and one StuG blows up and two are bailed (I missed both firepower rolls!).

The StuGs appear to be in trouble as they fail to remount, but do make "last stand" to remain in action. The positioned infantry on the hill naer them remains pinned also, so the germans send in a fresh platoon to take up positions between the two. The single heroic StuG hits both the remaining M10s, but does nothing. (I rolled 5,6 and he failed firepower to bail). The ace 2" mortar team dies in a quick burst of machine gun fire. 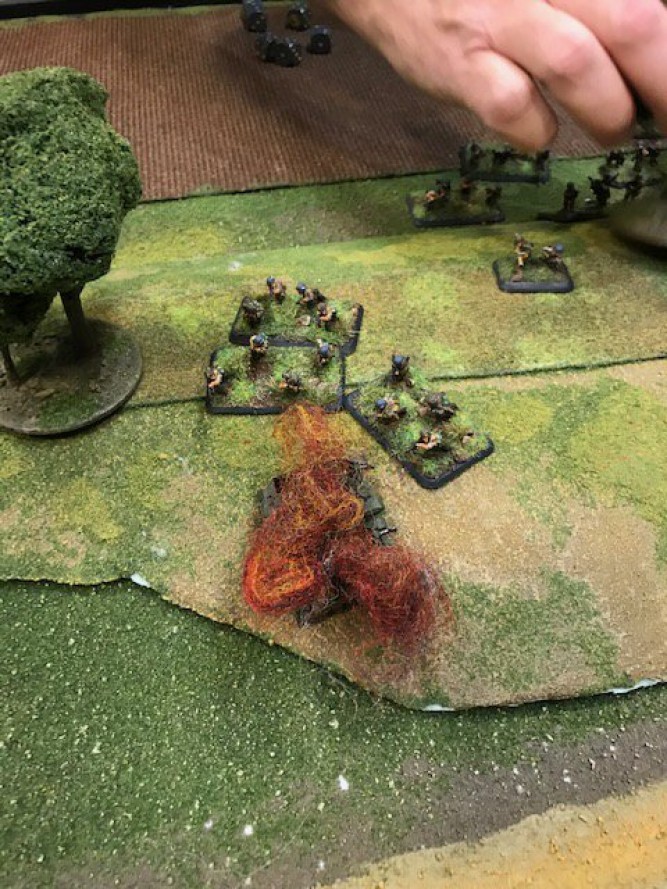 A hidden panzershrek team crawled through the woods and bailed out one of the carriers. The Germans advance quickly through sporadic defensive fire upon the surviving carrier. In two rounds of confused attack/counterattack, the carrier breaks off as he sees the others captured.

The lone carrier remains in action but 2nd platoon is still pinned. The 6pdrs get three hits on the StuGs but their heavy armor deflect them all. The M10s destroy one, though. Both infantry platoons and mortars trade shots with the Germans, killing a few elemens. Needing to re-supply, the StuHs retire.

The battered German infantry in the center remains pinned, but do manage to dig in.The last StuG continues in action and again hits an M10 with a glancing shot (I roll another 6!) and pulls back behind the ridge.

Firing from both depleted forces deals a few infantry casualties but little else. The British forces retire with night approaching. The roadblock holds.