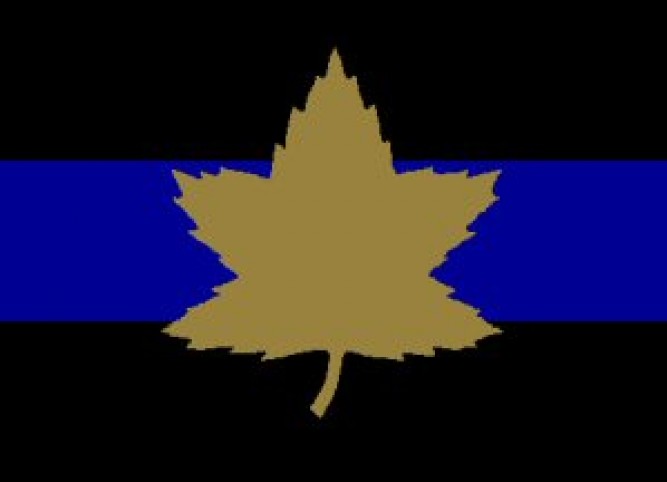 Second Canadian Armoured Brigade insignia. This would be painted on Twombley's Sherman tanks

Two kilometers southeast of Argentan, Captain Twombley got the despatches from the Brigade CO of 27th Armoured Regiment (The Sherbrooke Fusilier Regiment). "Support elements of 51st Highland Division and secure the high ground near St. Maly. This objective will be part of an encircling operation to cut off and destroy the retreating Germans."

Twombley approached the HQ tent of the Captain commanding the infantry. Maps laid out on the back of a recce carrier detailed the enemy positions which had been gathered during the night. Two infantry platoons were posted in the center near the bridge and near the village of St. Maly.
A mobile battery of "Wespes" positioned themselves behind the farm. Panzer IV platoon were in the farm crops and also on the far right of the line in a walled enclosure. Halftracks were observed moving about, confirming the infantry unit as Panzergrenadiers. Light AA and a scout armored car regiment were posted in the woods close to the ford. 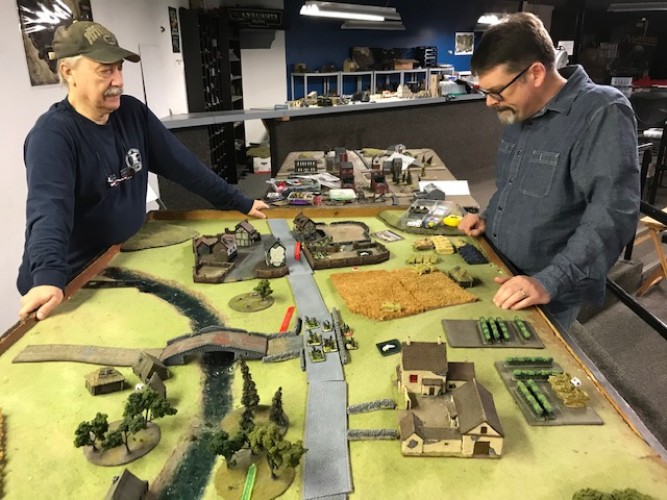 Captain RJ Baier, 7th Bttn Black Watch, drew up the attack plans. "We will attempt to swing our main force to the right. The ground there has a covered approach to the farm complex. The infantry will crosss the stream and attack through the woods, supported by Churchill tanks and the Sherbrooke tanks. I'll post the 6pdr AT guns to the left to screen off that flank. Hopefully we can deploy forward enough before dawn to give the Jerrys a nice surprise!" 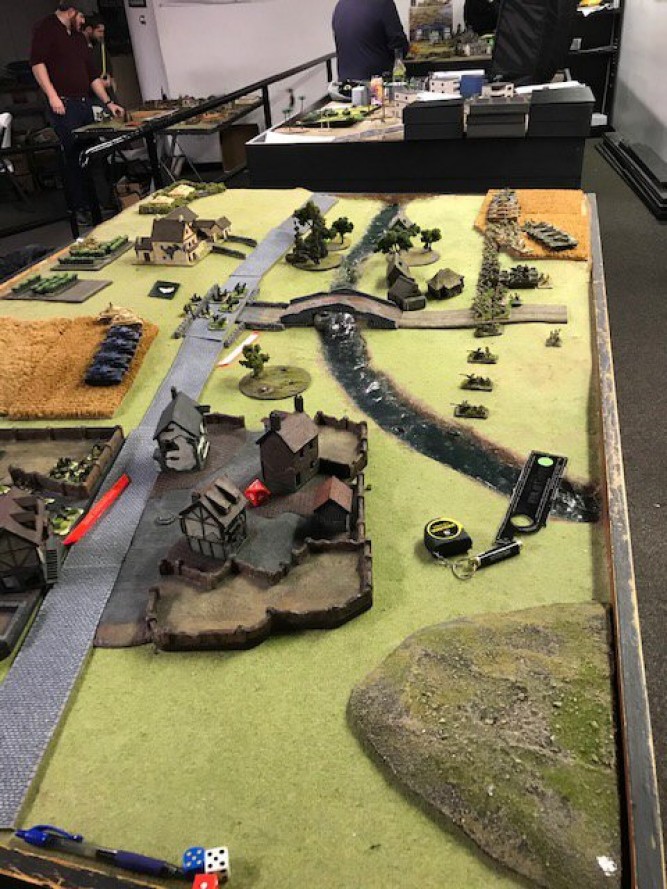 At first light, tank engines sputtered to life and the Allies moved off as fast a possible on their assigned routes of march. Twombley's Firefly sat back to harasss the enemy Mk. IV platoon while it's mates got to gun range. It's harassing fire was, simply to say, amazing. A lucky 17pdr shot found the turret front of a tank on the opposite side of the valley, showering flames and debris into the sky! (I needed a seven to hit, and rolled 6,6!). The platoon of M10cs were even better, although it was easier to hit their targets as the sun rose...all four MkIVs near the bridge were knocked out (Four hits out of eight dice, all firepowers rolled!).

British Priest gunners effortlessly ranged in on the Wespe platoon (Using the "Artillery Expert" card to move the pre-spot for the guns) but bracket the position with one near miss recorded. (Jason rolled a big save!) 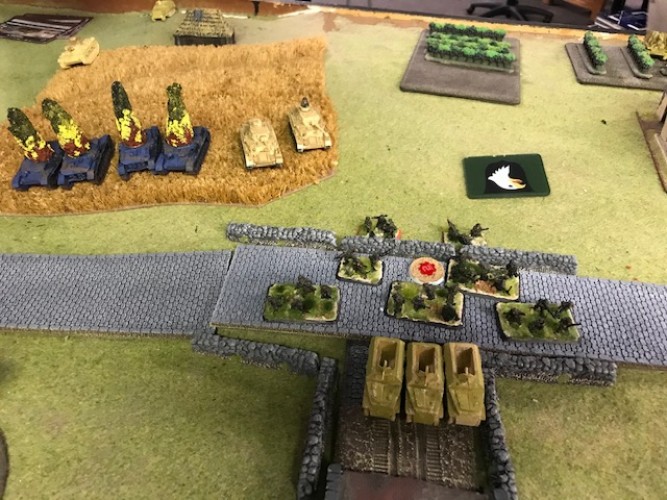 Tanks burn and the halftracks advance to the bridge!

The Germans desperately rush a few halftracks onto the bridge, hoping to slow the infantry advance and get two rifle sections. The Wespes target the M10s and kill one, bail one, and do the same to a close-by carrier platoon. The depleted tank platoon leaves the walled enclosure and conceals itself behind the farm buildings. 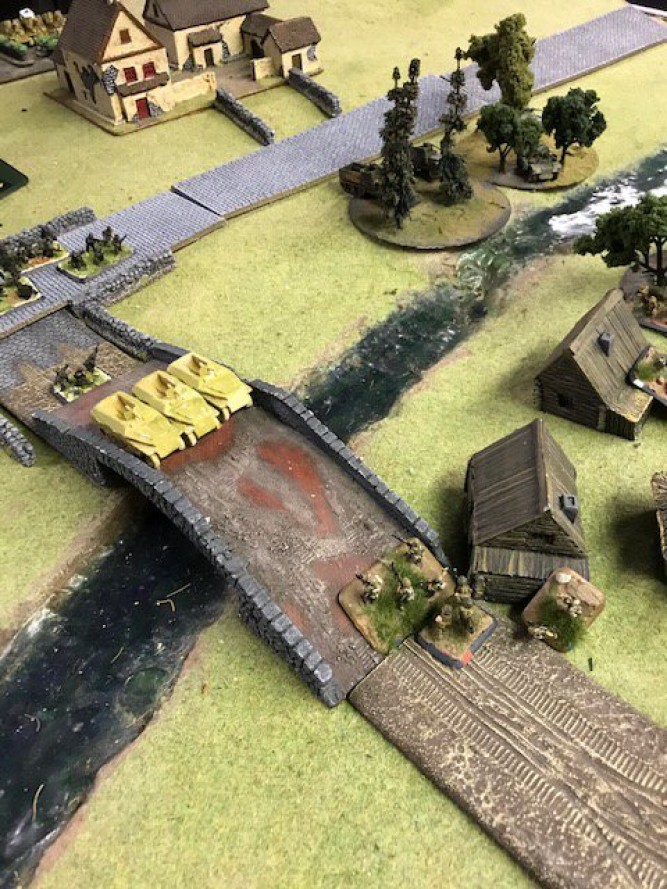 The maneuvering Sherbrooks fire at the Wespes but miss. Churchills approach the wood, and detecting one of the armored cars hidden there, promptly knock it out. The infantry swarming across the stream destroy one of the FlaK tracks by Bren and grenade fire. Another near miss from the Priests shake the Wespes, and two of the half tracks on the bridge are lit up by the 6pdrs. The remaining recce armored car streams to the rear out of harm's way and the AA track follows voluntarily, abandoning the woods to the two platoons of Highland infantry. 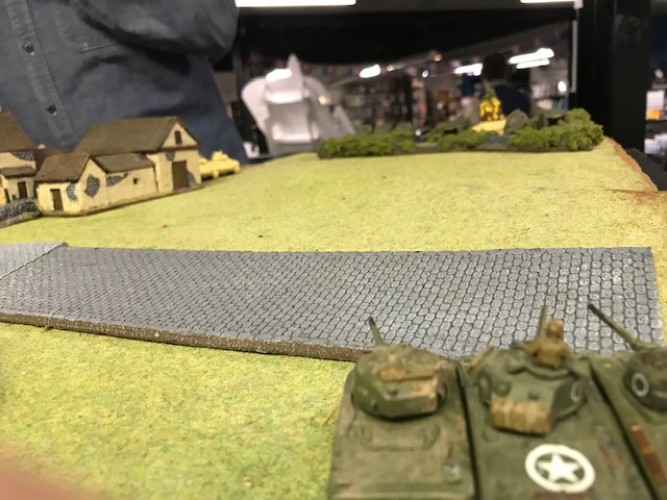 Twombley: "Gun flashes!! Ahead behind the walls!!"

The cunning German now springs a careful ambush as six Stummel half tracks appear where the Mk IVs had been a few minutes ago. The Sherbrookes are destroyed in a flurry of 7.5 cm shells from the tracks! (Jason surpassed my luck...9 hits out of 12 shots! Of course I roll at least one "2" on each tank and the whole platoon is killed.) A wounded Twombley pulls his gunner out of the turret just as the tank burns. "Damn Ronsons!" he mutters as he drags his mate towards the Churchills. Two carriers are knocked out by the HQ Panzer IVs in the crop field (needing a "6" to hit!) 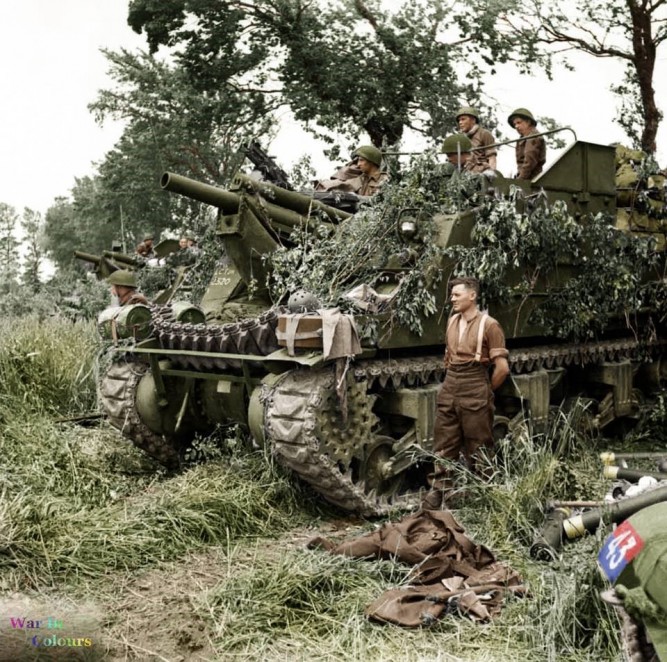 The M10s attempt to blitz and fail, missing the Stummels completely. The Churchills also miss the camouflaged tracks. At least the artillery does something! A Wespe explodes (another was also hit but he made a good saving throw) and a MkIV is bailed out in a repeating barrage from the Priests. The 3inch mortars lay in on the infantry near the bridge and get five hits pinning the platoon and HQ section. (Two gun section confirmed all, but Jason's saving throws and one missed firepower negate their barrage.)

The depleted German tankers, seeing the majority of their unit gone, withdraw the HQ unit. The Stummels, electing to prolong their battle, choose to go to ground. The M10s were out of range and the Churchills nearby are too tough to kill with their short 7.5cm guns. Discretion the better part of valor! The return fire from the Wespes is generally ineffective, but one of the Priests suffers a near miss with no damage. (I saved). The infantry in St. Maly mount their tracks and prepare to move to the center.

Another Wespe falls to the continued barrage by the Priests and the mortars keep the German infantry pinned. The 6pdrs notice the hiding tracks near the village and bail one. M10s and Churchills fire at the hidden Stummels and one is bailed by Churchill 6pdrs (missed fireppower roll!).

The Wespe sticks it out but voluntarily leaves the field for re-supply (counts as a destroyed unit as it is in bad spirits). The endangered infantry at the bridge exchange fire with the Brits in the farm buildings and woods, but only force their heads down (three hits, but I save all.) The loaded tracks move to the bridge, studiously avoiding the 6pdrs. 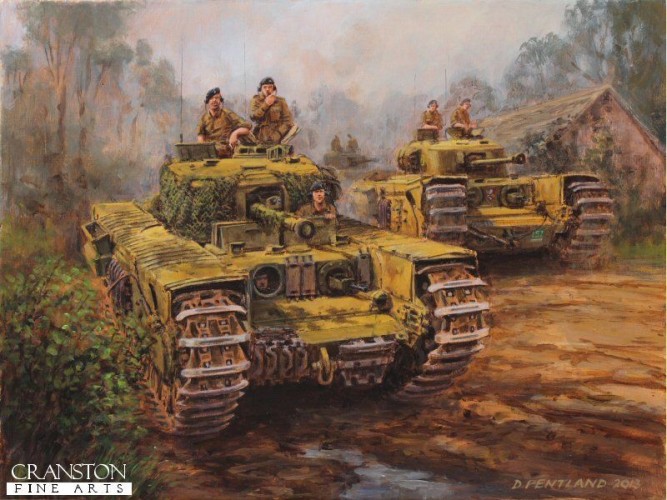 Again the M10s miss, but the Churchills kill one Stummel. Their targets now gone, the 105s range in on the mounted tracks in the corn field. One round gets a near miss and shakes the crew (failed firepower roll!). Infantry and mortar fire pins the German infantry at the bridge.
looking for a sight line on the Stummels, Baier moves his section to the right. He gambles that the coming two-platoon assault backed up by Churchills will take the bridge without needing his participation.

The Germans all recover and lay down all their fire on the farm buildings. Stummels, Mk IVs and halftracks net two infantry sections and pin the platoon. Tanks and halftracks move toward the crucial bridge. 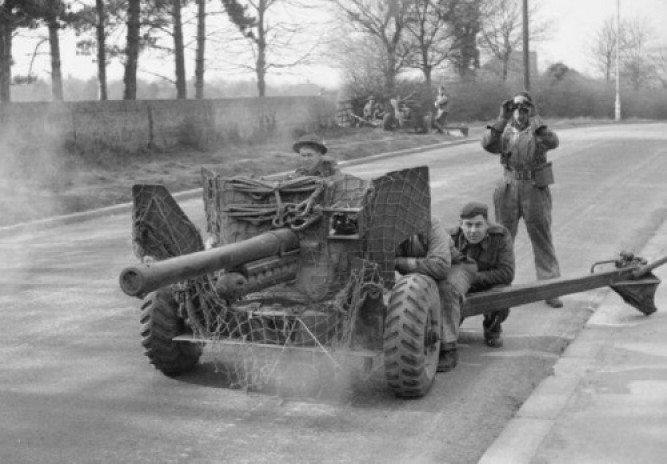 The infantry in the town recovers and move closer to the bridge, supported by the second platoon moving through the woods. The cheeky PIAT gunner lets loose on a MkIV but the bomb flies wide right, way off target. Once again the M10s miss but the Churchill gunners do not---two more Stummels go up in smoke and flame. 6pdrs, now back in range of the laden half tracks, reach out and destroy two. A nearby MkIV also burns when the firing stops.

The decimated Germans, with all hope gone and low on ammunition, come out of their dugouts with hands high and surrender. (The tracked platoon was down to three stands and the bridge platoon four and its panzershreck gone. The British HQ was in position to call the Priests on the remaining Stummels. Two British infantry platoons and the Churchills were close enough now to charge the bridge defenders. One tank and two below-strength platoons weren't going to stop them.)

Note: Allied control of Vire gave 5 points worth of bonus cards to the Allies in this battle. I couldn't spend the 5 points for Fortress Europe Brits!!! I chose "Lucky", "Softskins" for the 6pdrs, and "Artillery Expert" for a total of 3pts. This would be a tough one for my opponent as this scenario normally would give 4 minefields to aid his defense. We discussed it and he wanted to play it as the campaign had dictated, so declined the mines. After the battle in our postmortem, he said he would have sealed off the town side of the field so the mines would have had no effect.