No Retreat: Tigers attack near Hill 112 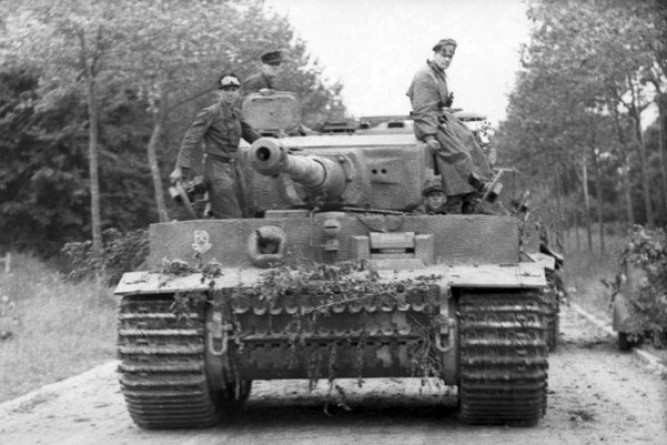 No Retreat: Tigers attack near Hill 112

Ten miles north of Hill 112, an airstip had been overrun by elements of 3rd Brigade, 51st Highland Division the night before. Now they ready for the inevitable counter-attack. A small force of one infantry platoon, a 4-gun 6pdr AT battery, and a carrier troop deployed near the airstrip hangar, a certain objective for the Germans. Some M10c tank destroyers maneuvered for a suitable site to ambush any attacking force. Stationed nearby in the next village was a reaction force of Sherman tanks, 3" mortars, and another infantry platoon. 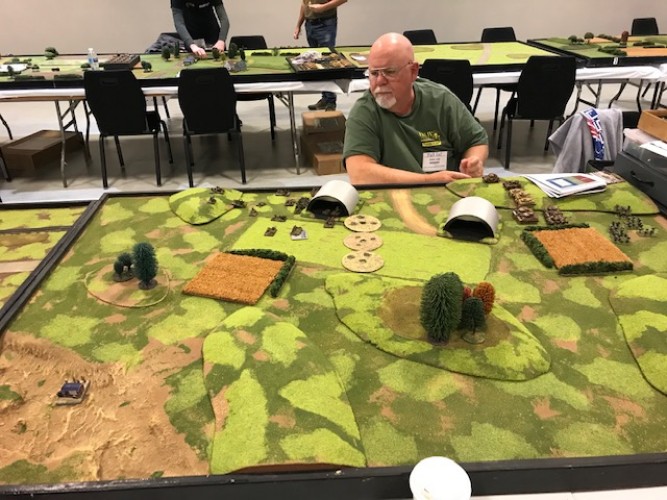 Forward scouts soon reported a column of Jerry armor moving in from the west: 8 Mk IV tanks, a platoon of infantry and TWO Tiger tanks!

One 3-tank platoon drives at maximum speed to the German left, angling to cut off any British reserves. HQ and one platoon of Mk IVs head for the center, and the infantry and Tigers head for the hangar. 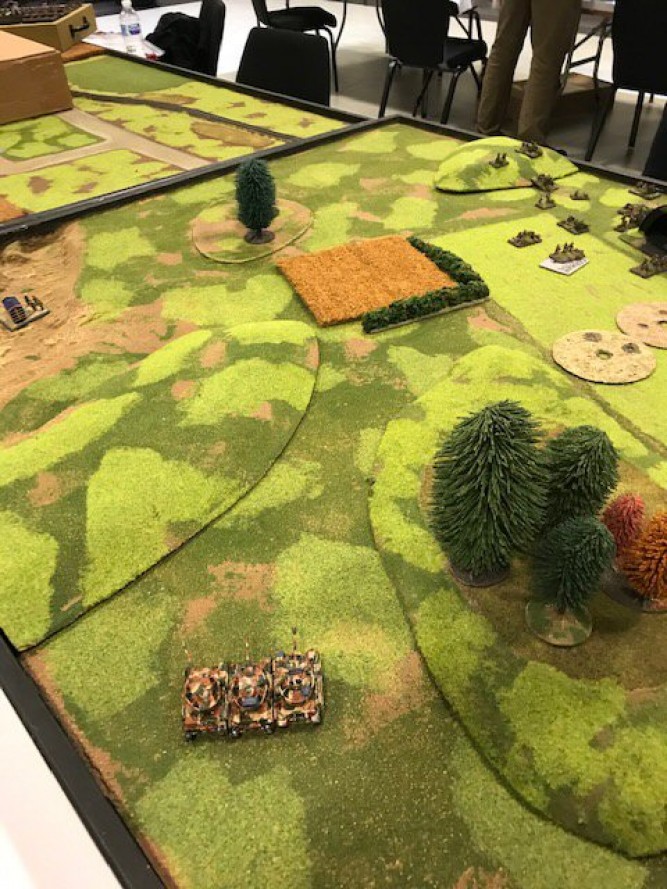 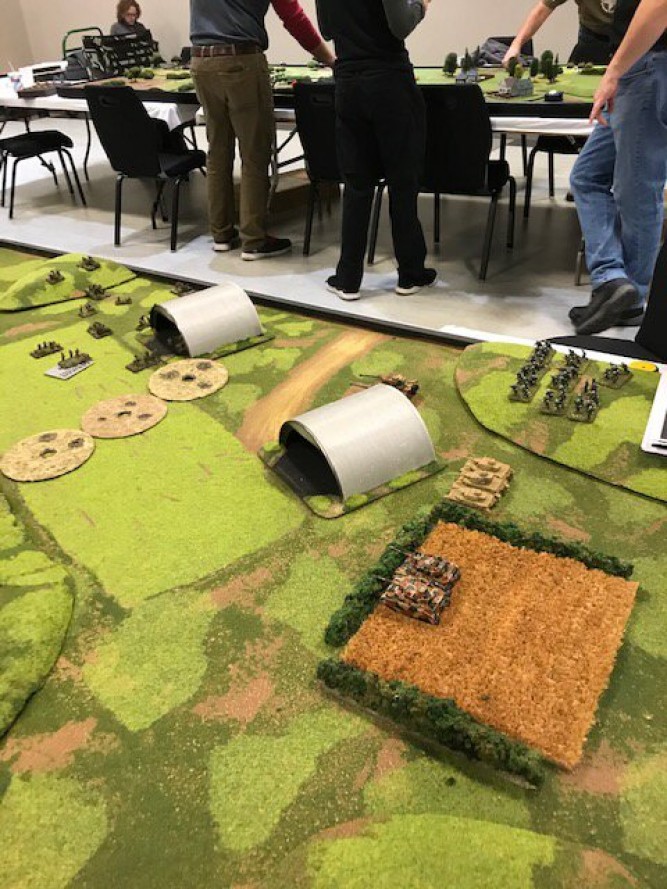 The M10c platoon crests the hill on the British right and targets the single flanking platoon. Good gunnery ensures the destruction of two tanks and the last survivor bailed out! The M10s attempt to take cover behind the hill but fail. 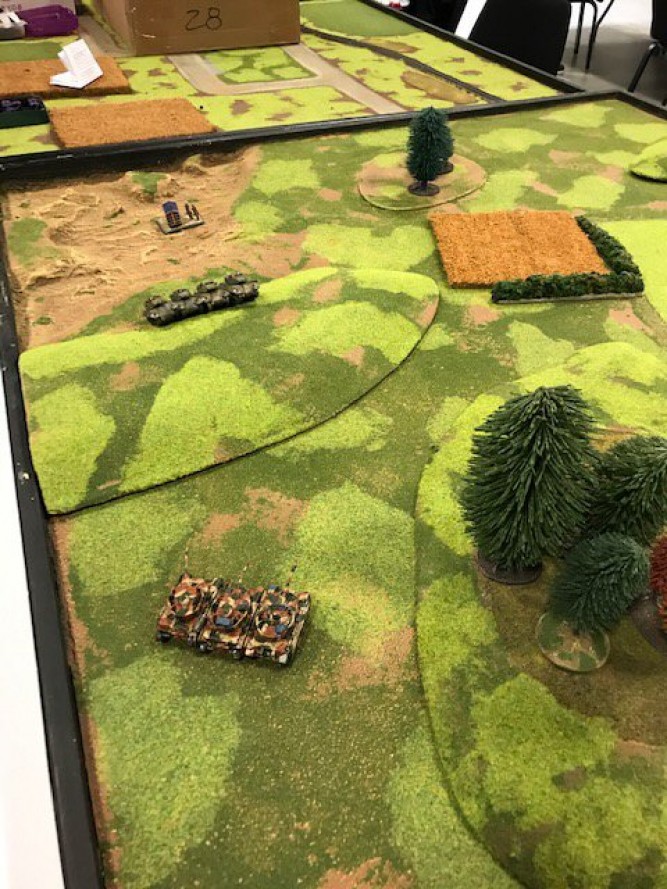 Tigers advancing behind the hangar spot a hidden 6pdr and rake it with MG fire. In what would prove later to be a telling blow for the British defenders, the forward 6pdr nearest to the front of the hangar is destroyed by MG fire from the infantry platoon! (John need a 7 to hit, I failed the save, and he rolled 6!)

In the British turn, the M10s take out the surviving MkIV of the damaged platoon. The recovered 6pdrs unpin, but elect to remain gone to ground, trying not to be too obvious to the Tigers and 5 MkIVs scanning the field for targets. 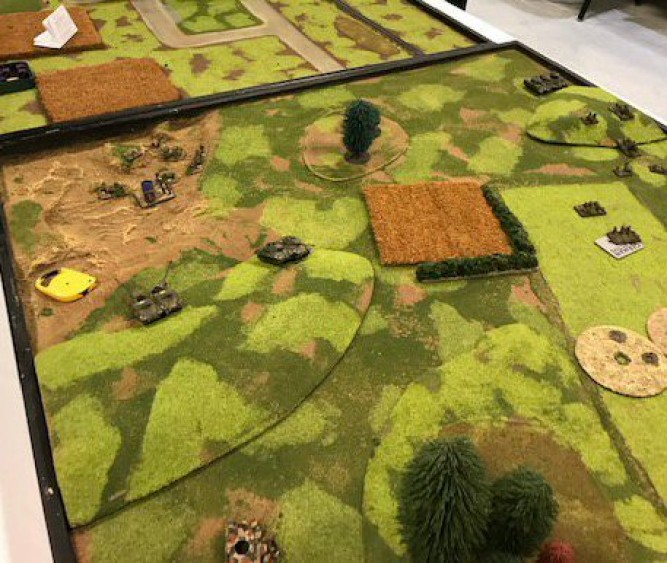 The German fire is largely ineffective this turn, but one M10 is destroyed. The remaining M10s fire and manage to bail one Tiger. (This missed firepower roll hurt!) An arriving Sherman tank platoon motors up behind the hills, hoping to shoot next turn.

The Tiger re-mounts and all others advance. One Mk IV eliminates an M10.
The Sherman platoon blitzes into a perfect firing position and can't hit anything. In seeming sympathy, the M10s all miss, too! They then fail to take cover with a blown "shoot and scoot" order.

The German infantry pushes into the minefield guarding the hangar and loses an element in a huge explosion.
Their tanks all fire at the Shermans but only succeed in bailing one.

The Shermans continue their bad gunnery, getting only one bounced shot on a Mk IV. The carriers, infantry and 3" mortars which set up last turn open up on the hapless infantry stuck in the minefield and get four elements downed. The anti-tanks guns still hold fire. The Shermans pull back behind the hill to re-group. 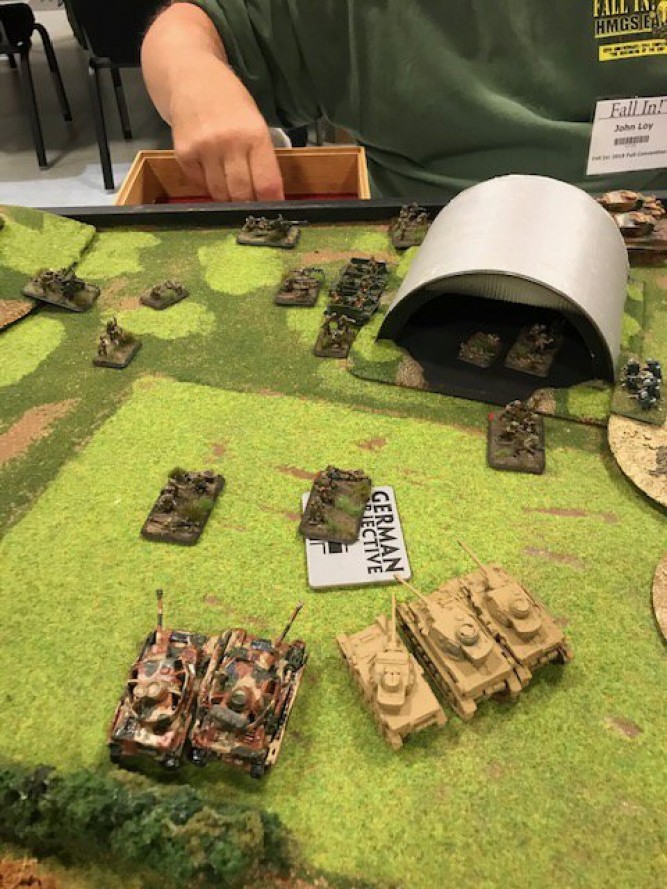 Four more infantry teams enter the minefield and again lose a team, this time a MG42 team. The Tigers and Mk IVs can't hit the hidden 6pdrs, but machine gun fire gets two British defenders and pins the platoon. Seeing an opportunity, the MkIVs charge home! Counterattacking, the Highlanders charge in but the their PIAT is cut down and they pull back to cover. Grousing, they complain bitterly about the lost 6pdr which would have surely covered their mad attack.

The AT platoon finally gets the order to fire at the enemy tanks. Number three gun's commander Cpl. "Jock" McLaughlan peers through his gunsight reticle, lines up on a Tiger and fires. Just as the flash, bang of the exploding tank registers , he is already lining up the adjacent tank. Fire! Hit! Another explosion tears through the second Tiger. (Two hits, John rolled 1, 1...I rolled 4, 6 for two kills.) The rest of the battery fires on the MkIVs, but none measure up to "Jock". One is killed (on a double bail) and two others are bailed. Perhaps it will be enough....

Evidently inspired by the sacrifice of the Tigers, all the Germans re-mount and the recovered infantry removes the mines. It's now or never...only a few infantry hold the objctive. Firing wildly, the Germans can't kill any of the defenders, so the tanks move in again. After the third round of attack/counterattack, the Germans falter, but then drive the British away! (John failed the counter-attack roll but his nearby commander made it!) This day belongs to the Jerries.

As mentioned earlier, the key was the loss of the lone 6pdr which was within 8" of the front of the British infantry. This may not seem much, but defensive fire from this gun could have hurt or even stopped the German tanks. The loss of the PIAT on it's first attack and the missing 6pdr would doom the infantry. Credits to John, who kept the pressure up when all looked lost.