The Germans placed a Tiger platoon in Reserves (48pts!). British chose all the tanks, one infantry platoon and universal carriers.

Recce infantry platoon deployed on far right. German recce SdKfz 250s deploy on the British left near the town. Brits counter with a carrier platoon, allowing the British to occupy the whole town.

The British roll to move first in this meeting engagement, so can’t use artillery. The 6pdr battery engages the enemy and destroys one half-track, killing all it’s passengers. Vickers guns target the emplaced 88mm gun and get a near miss (needing a 6 and confirming 6 to destroy the gun since it was using the PaK Front card). Germans in their turn fire the PaK battery at the pesky 6pdrs, destroying one. The Stummel battery chimes in and also eliminates one. A hail of machinegun bullets riddle the town from all the other vehicles and one infantry element falls.

A light rain and clouds seem to have delayed the promised air support. Priests drop a barrage on the tempting mass target of the field full of half-tracks, destroying one Stummel. A half-track transport with its passengers takes a direct hit and is blown sky high. The Vickers guns try a barrage to their right and fail to range in. The mortar platoon pins the PaK40s.

All Germans recover save the PaK 40s.

Seeing an opening, the Germans try to charge into the Vickers gun positions. One is bailed by PIAT gunner “Red” MacIntosh (Mac an Tòisich) of second platoon as it approaches. Hundreds of MG bullets do no apparent damage to the tracks and two Vichers are overrun. The Germans hold their position as the wild charge ends momentarily (no opponents within 4 inches).

Again the RAF fails to arrive and there is no support from reserve units. Trying to eliminate the German penetration, the 6 pdrs fire but miss all targets. “Red” MacIntosh lets fly and the bomb destroys the platoon commander’s track and it’s passengers. 105’s repeat and get another Stummel killed and one bailed out.

The Germans unpin all. Mortar bomb shower the 6pds but do no damage. The scout 250’s get three hits on the 6pdrs but do nothing. Stummels, however, do kill one.

The remaining 6pd, now out of ammo, retires from the field for re-suppy but the Vickers guns remain behind to support the defense. Again the cloudy skies keep air support away. A platoon of heavy Churcill tanks does arrive to help. 3 inch mortars repeat their barrage on the PaK40s getting near misses on each gun (Tim double-saved all four hit guns!!!) The Priests range in and get another Stummel and pin the 88mm gun. Gunfire from the Churhills is largely ineffective, but one half-track is bailed. The Vickers guns fire indirectly at the German infantry near the center of the field and hit an 88mm position and the infantry, but both units save.

The German 88mm in the center and the infantry hit remained suppresed, but the PaK 40s recover. Accurate German mortar fire kills an element of 2nd Platoon and pin the 3″ mortars. The town is raked by machinegun and 88mm fire, but does no further damage.

Again no air! A Stuart Recce section does arrive and maneuvers into firing positions. The Vickers section remaining leaves the field, out of ammo. Fire from the Churchills and Stuarts kill the entire transport half-track section of the germans holding the center. The repeated barrage of the recovered 3″ mortars finally manage to get one of the PaK 40s. The Priests try to range in on new targets but fail in the attempt. One armored mortar is destroyed.

The PaK 40s and infantry recover, but the 88 does not. Unfortunatly for the defenders the sound of big Maybach V12 engines mean that Tigers have come to prowl! A mortar barrage kills another element from 2nd Platoon, chipping away at the defense. One Churchill is bailed from a long range hit from an 88mm gun.

The tank and 3″ mortars can’t recover, but the infantry does. Again, no RAF! Arriving M10c’s miss their shots at the Tigers. Two Churchill tanks try to silence the German mortars but also miss.The Starts machinegun the PaK40s to try to suppress thei fire and get three hits. Priests do manage to range in and pin the PaK40s, getting a near miss on one gun.

The Germans can’t recover the PaK 40s and the crew of the 88, still shaken by the Vuickers barrage, refuse to man the gun. The dangerous M10s are targetted and two are destroyed by 88’s and 75s. A Churchill is bailed out by one of the Pak 40s.

But “Red” gets anxious and misses! The Tigers fail to crush their targets and 2nd platoon counterattacks. Charging out of the town Hotel, “Red” gets too close to miss this time and one 60-ton monster erupts in flames! Some frightened Frenchwoman tries to flee the action with a baguette under arm ansd is mistaken by the driver of Tiger 302 as a PIAT gunner. Franticly he reverseses but is immobilized by a stout stone wall he staddled. The crew abandons the vehicle as the rest of the Tiger platoon retreats from combat.

The Churchill platoon has to use the “Lucky” card to remount but fail. Fortunatly the platoon remeins to fight. All other units recover. Through a break in the clouds two P40s bore in on the Stummels and destroy one in a burst of machinegun fire.The shaky Chuerchill misses his target, but the Stuarts get an infantry element. The 3″ mortars blow up one more PaK40.

One of the Tigers who backed out of the village attack revealed an exposed flank to the M10 gunners, who promptly laid four shots into the tank. One directly glanced off, but the ammunition must have been deficient as the tank was merely bailed. (1 succesful roll to bail a matched armor save, but two missed penetration rolls! Aaaack!)

The Vickers-pinned 88 and the left 88 remain so and the lone PaK40 carries on. All other Germans recover.
The Tigers come back for more, but one thinks he sees a PIAT gunner, or maybe a Frenchwoman and halts short of the town walls. One Stuart burns from a 75mm hit. “Red”‘s number is up as the Stummels bury him under rubble. The MM would be awarded posthumously. (I failed to move the hit and failed the save die roll). The Germans fire everything they have at 2nd platoon and fall short of pinning them until the 88mm Flak gun gets a near magic hit (he needed to roll a 7) to pin them. Now that “Red” and the Frenchwoman are absent, the Tigers engage and kill four infantry elements in a furious muti-round melee. Seeing an opportunity to finish off the defenders, a section of half-tracks enter the town outskirts. Losing one track to a localized British counterattack, the defenders are finally eliminated and the town is taken. 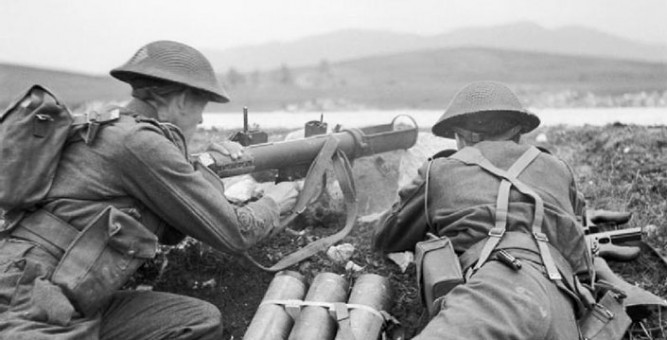 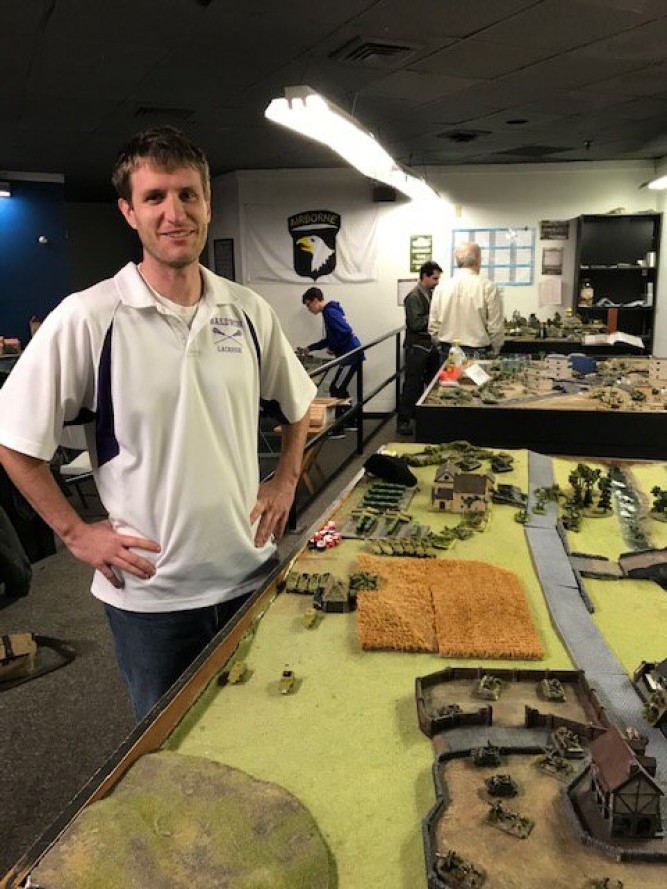 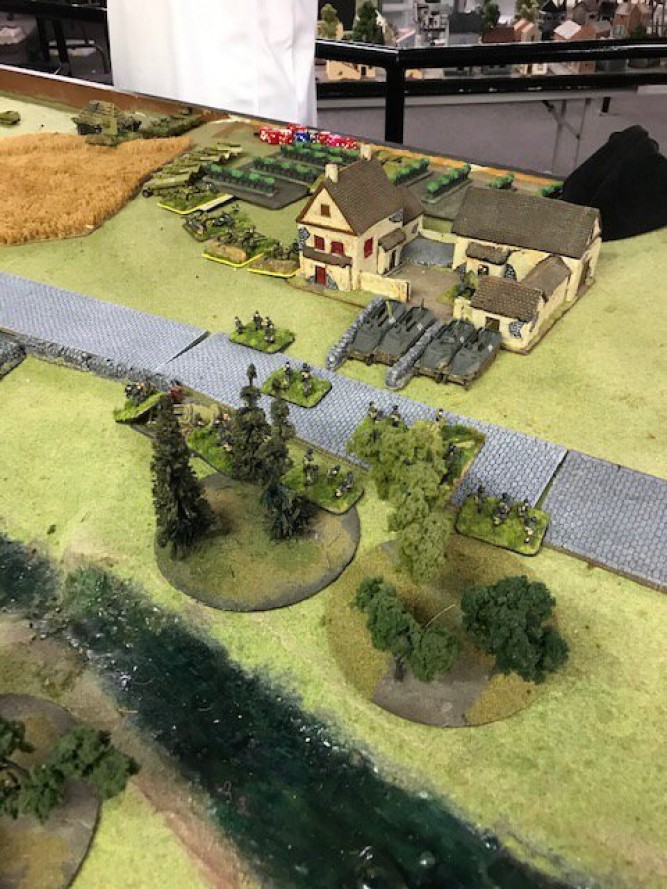 Recce platoon deploys to the right. 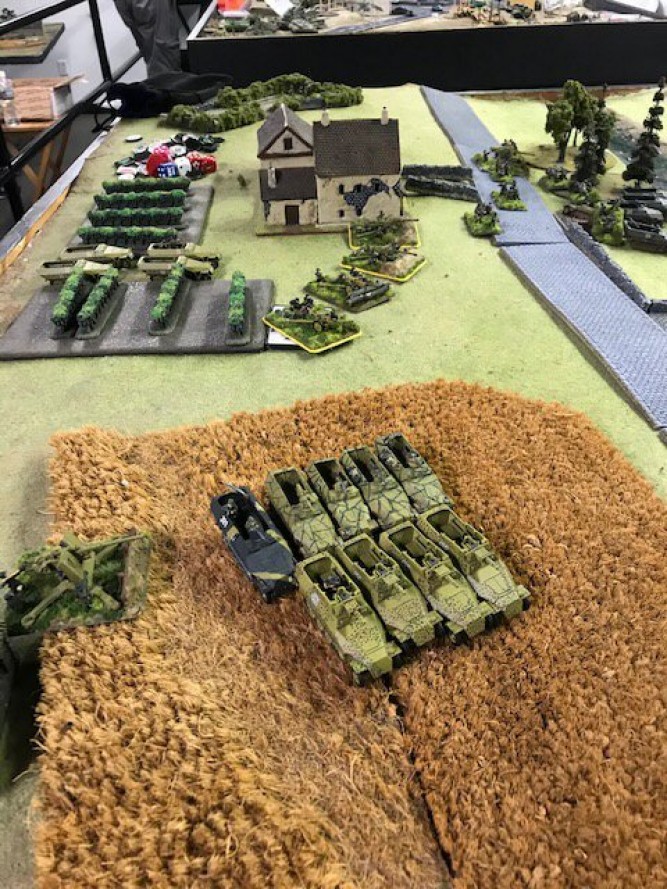 Tracks in the fields. 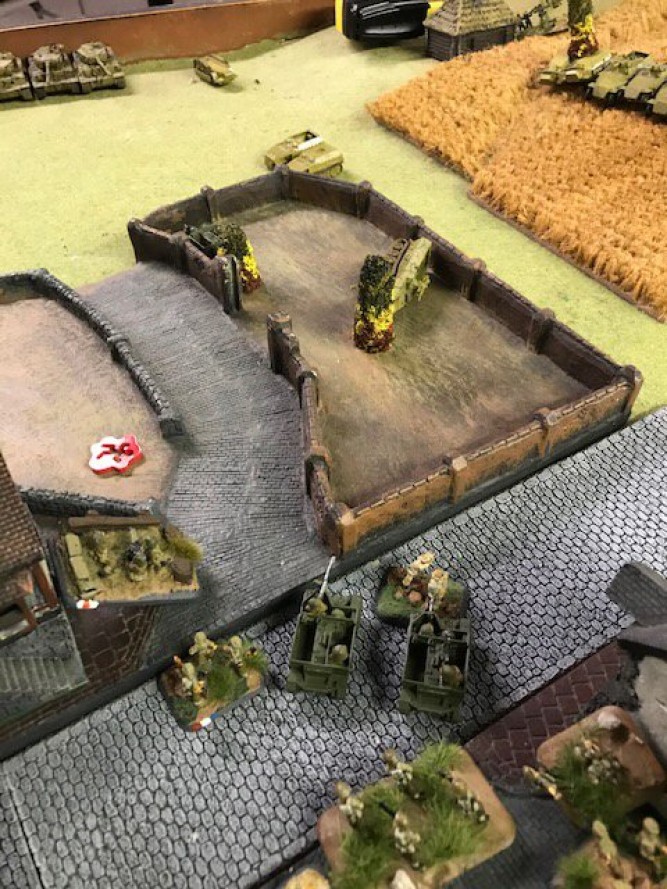 Assault by half-tracks is repulsed. 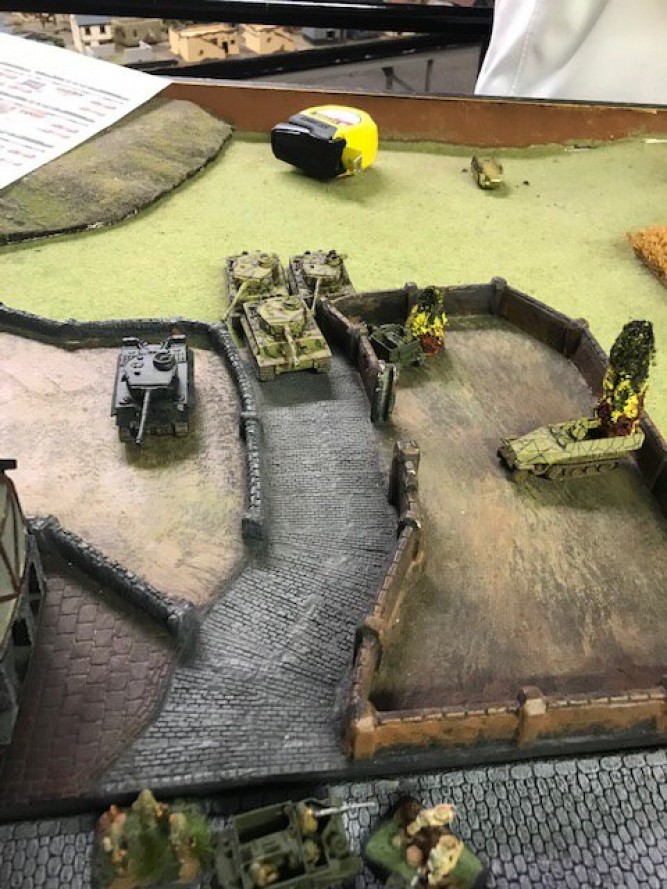 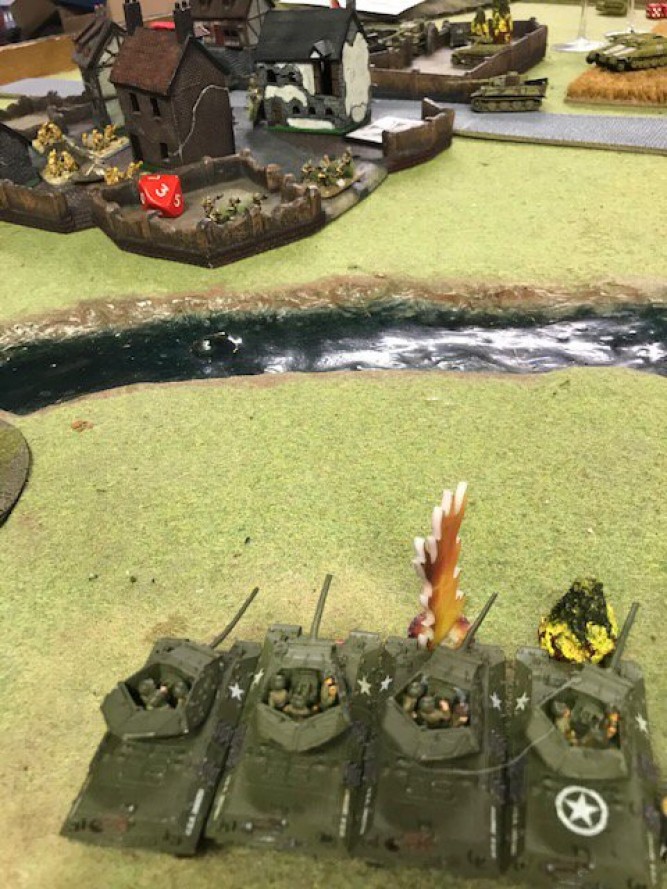 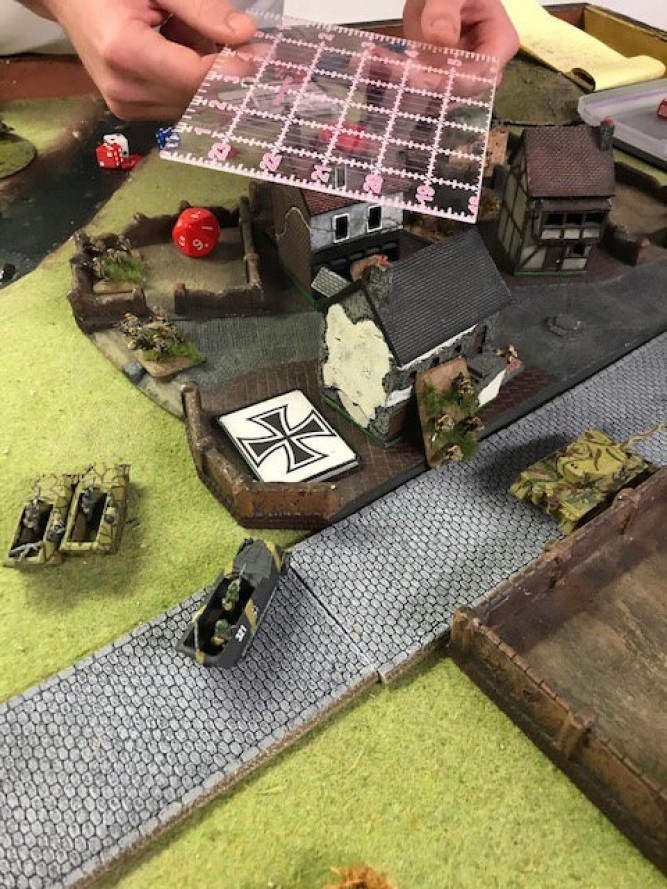 Mortars rangin in on the town. Soon afterwards, the germans will succeed and capture the tow,