Bringing the guns to bear!

We played some smaller games, all armor, to get ready for an upcoming event and push forward in what’s been an excellent campaign put on by Battlefront. It’s driven lots of play and they should be commended!

Von Doooom played a small force of Panzers. My Soviets brought a blistering barrage of numbers with 5 T-34s, 5 T-70’s and some lend lease Stuarts (7 to be exact). The map we used represented a dry river bed, the Germans looking to destroy a small dam and stall the Great Bear’s advance. The Russians deployed to the south, spread out wide and ready to capture some important objective points. The small but tough German defense packed around the entrance to the easier to traverse build bridge. Speed and confusion was going to be the name of the game, if terrain didn’t get in the way as it did in previous games. This was a quick game, enabling several more throughout the night and engaging enough to be challenging and thought provoking. Smaller games have their own unique balance, especially one like this with armor values only. 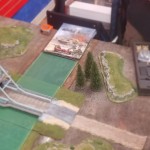 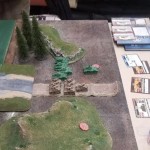 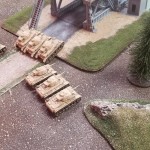 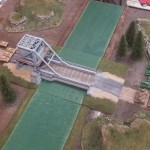 To the South the quick double engines of the T-70's whined into action, progressing as quick as possible down the river bed, looking to get into cover behind a hill before engaging the superior armored force or hopefully just getting the objective. Stuarts pushed their numbers across the bridge as T-34's watched on in a defensive posture.

A key moment came earlier. Bundled up, the brave tankers looked down the barrels of dangerous guns... and came out unscathed! God was surely with them!

Return fire from the lend lease took out a panzer despite the general unease in use of the new tanks. Russian built firepower took out the commanding tank in a blaze of multiple shots. A russian cheer went up and tanks barreled across the dusty river.

The lightly armored T-70's fell victim as Panzer commanders looked for easier targets. They saw the tanks coming around a crest of rock and opened fire, taking several (and eventually all) out.

Knowing the end was near, the full might of Soviet horsepower pushed forward. Outnumbers, the German forces were put to near rout, doing their best to futiley return fire.

Breaching the bridge, the God graced Stuarts gave a beachhead for the following T-34's to hit solid ground and the Germans were annihilated to a man, objective secured.