Staggering Back through the smoke and wreckage of the battlefield a bewildered group of Allied Tankers made their way back to the Command Post. “WHERE ARE YOUR TANKS ?” the Commanding Officer Asked . “They’re Gone.” replied Sergeant Washout. ” PANTHERS, THEY HAD PANTHER TANKS and Before we Draw a bead on them, They OPEN FIRED at long range ! Gone , all Of Our Tanks are Gone and the Objectives , the 2 Fuel Dumps , are in their Control. We Were CORNERED AND SHOT TO PIECES .” — ” Here’s how It Happened . ” the Sergeant went on to explain. — We could see two Larger than Normal Tanks moving toward the Eastern Objective , the Fuel dump , but did not recognize them as PANTHER TANKS at first. I Had sent a Force of Three Sherman 76’s to secure that SAME position , the Fuel Dump to the East and I sent The rest of the force , Three Sherman 75’s and MYSELF in the M-10 WOLVERINE toward the Other Objective , the Fuel Dump to the South when we spotted another Panzer Force Heading toward that same Objective . They , like Us , had Split their Forces . It was then We Heard the “CRACK” of gun fire from those Larger Panzers that we all realized they were Indeed PANTHER TANKS we had Been warned about. One of the Sherman 76’s took a minor hit . From Our Southern Position the only thing we could do at this point was watch as Our EASTERN FORCE returned Fire ! “BLAM, BLAM , BLAM !” the Three Sherman 76’s Each scored one Hit On the Lead PANTHER . We could not Watch Long as the Southern Force of FOUR Panzer IV’S came into Line of sight , I Ordered our Sherman 75’s to OPEN UP on them while I Held my M-10 in reserve. The GUYS must have been Nervous because we did Very Little Damage to the Panzer force and MY own Gunner couldn’t HIT THE BROAD SIDE OF A BARN with his first shot either. We Braced for their return Fire. The Panzer force was Able to do only minor damage to Our tanks but did Knock Out the EXTRA AMMO that One of Our Sherman’s was Carrying on the Outside Deck of the Tank. I could see the Easter Force was Trying to Repair one of the Damaged Shemans and get the Bailed out crew to return to the Fight – But THEY were Not Having Anything to do with IT . After all , There are Two PANTHERS coming toward them ! — WHAT WOULD HAPPEN NEXT I Thought ! — What Had Just Happened ? Those FAST moving PANZER FORCES had just “BLITZED” into position near BOTH OBJECTIVES and were taking up defensive positions and were NOW Just sitting there HOLDING ! — The Eastern Force Moved Up Slowly but was Taken Under Fire Almost immediately by that Lead PANTHER -again its gun made that terrible “CRACK” sound that only a 7.5cm KwK 42 could make and Our Damaged Sherman 76 was GONE in a Puff Of Smoke. We Could Now HEAR over the Cheers of the PANZER CREW that this Panther tank was Commanded By None other than “MICHAEL WITTMANN !” The Second PANTHER , which was providing Back Up , now Open Fire On the remaining Sherman 76’s , but Its Shells Missed their Marks and the Shermans Returned Fire. What to Their Surprise , they Spotted a Panzer IV which was acting as a scout for the Panther Force and took that tank Under fire and Destroyed IT ! — A Good Job but a BAD IDEA – Those Sherman 76’s should have Concentrated their FIRE on “WITTMANN’S” Panther ! — At MY position to the South , I gave Orders to Push Those Panzer IV’s Out of the Objective and Ordered HALF the Force to Take Aim FIRST at the Damaged Panzer IV and the Rest of the Force to Fire , at long range , On the Undamaged PANTHER which was in support of WITTMANN to the EAST. Our Sherman Gunners Still Must have Had the SHAKES because a Only Minor Damage was inflicted on the PANZER force. Once Again My M-10 gunner was shaking so bad That His Shot Missed EVERYTHING ! — Things were Not going WELL FOR OUR FORCES and the Panzers still Held the Eastern Objective and Had Overwhelming Undamaged Fire Power at the Contested Southern Objective. Turn Next TURN of the Clock Would Probably decided the Outcome of this Battle Unless Something Shifted to the Favor of the Allied Force. – The Two Remaining Sherman 76’s at the Eastern Objective tried to cross a MINDFIELD to gain advantage on the Damaged PANTHER TANK of WITTMANNS and did so suffering only minor damage . AGAIN the PANTHER was waiting for them and OPEN FIRE on the Lead Sherman at near POINT BLANK RANGE and the Sherman In RETURN Fired Also — A HORRIFIC EXPLOSION OCCURED as Both Tanks were DESTROYED in a Huge Fire BALL ! The Second Panther seeing this Happen took the Last Sherman 76’s Under Fire and Put IT OUT OF ACTION . The EASTERN OBJECTIVE was NOW in Firm Control Now of the PANZER FORCE . The Battle now shifted to the Southern Objective at Near POINT BLANK range of Sherman 75 against Panzer IV ! — I Ordered My Sherman Force to Hold their Ground and “FIRE AT WILL!” — (My M-10 Gunner , JOKER AT HEART , answered that He would Do just that, as Soon as He could figure out WHICH ONE WAS WILL ! ) — The Shermans Fired first and did manage to Take Out a Few Panzers but Their Aim was Better and after Couple of turns of the CLOCK , as NIGHT Drew Close the Battle Ended when My M-10 Gunner , Still unable to Make ANY SHOT THAT COUNTED , jumped from out Turret and Pulled me with Him as Our M-10 Wolverine went Up In Flames. The Battle for the Fuel Dumps , Our Objectives in week 4 of the GLOBAL CAMPAGIN was over . WE HAD BEEN “CORNERED” and Shot to Pieces . 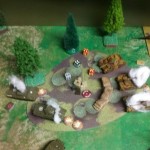 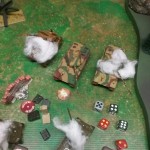 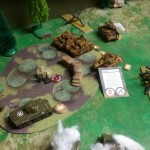 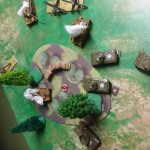 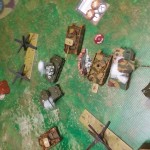 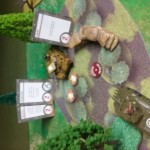 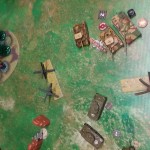 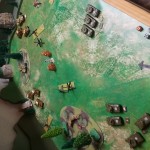 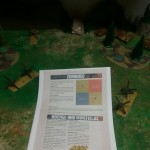 No one has recommended Sgt.Washout for commendation. Log in to be the first.