Defense of The V1

It was early morning and the grenadiers of the if the 25th division where attempting to take a short reprieve in a small village. This village was set to be a staging area for a V1 rocket aimed at an america outpost gathering momentum. As the morning light was starting to hit the village the sound of tracks moving in the distance was heard. The panzergrenadiers taking refuge in the nearby buildings awoke to shelling. Taken by surprise the americans blitz the german staging area only to be halted by the 10.5 cm guns waiting on the neighboring hills. The german commander had expected this attack and was taking a fortified potion. Lying in wait a panzer division backed by 2 tigers made short work of the incoming shermans. The losses minimal on the German side while the casualties on the american side racked up. Americans attempting to push up with their infantry met up with German machine gun fire shredding. The american shelling doing nothing to stop the unshakable will of the third Reich. The fighting lasted hours but felt like mere moments in the heat of things but ultimately the Americans failed to stop the launch of the V1 rocket. The Germans won this day forcing the Americans to retreat and fight another day. 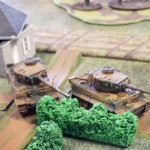 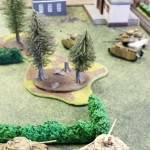 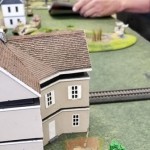 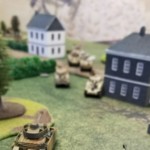