Sometimes you try things, and they work out…. sometimes they don’t. I knew Chris’s Brits would be packing plenty of infantry, AT, and arty. Hoping to overwhelm his initial defense I took big cats, recon and a solitary FJ platoon… but no arty. Frankly I needed numbers and some templates, and I bought neither. Chris played a solid game capitalizing on my foolishness.
Turn 1: utilizing my pumas, I stacked to the British right flank. Chris has completely shut down the left flank with mines. Fortunately, terrain afforded a nice piece of bocage to hide the spearhead of my force… nicely covering the entirety of my force . This would really be the only thing that would go right the rest of the game. Between the panther mg and the FJ Hmg I pinned units, and attempted to inflict some damage before assaulting…Alas while I would draw first blood, Chris would bleed me dry for the remainder of the game. At bottom of round 1, the Brits came to bat, seeing the entire Brit line shift in my direction. Chris popped his ambush of Achilles m10’s and then the hits started coming, knocking out 2 panthers immediately, bailing a third. Brit mortars would take a single FJ team.
Top of turn 2 would see my panther platoon NOT run off the table starting in poor spirits and 1 bailed out panther. The 1 panther would “bail” in and return fire. Brewing up to 2, bailing 1. With the FJ platoon still strong, and within range, I played my gamble…. and lost horribly!. While not getting pinned down, Brit defensive fire would evaporate 4 of my FJ teams( he needed 8 hits to stop the assault … he didn’t get em, but I wiffed on the 3+ infantry saves.) despite this, the FJ made it into the assault… and wiffed it again! Killing a single team. The British mastiff would now turn around and maul this German Wolf, killing 3 more FJ teams. The fearless FJ would fail the morale to continue the assault, and quickly fell back to the safety of the bocage. The following rounds were just a collage of horrid Dice rolling culminating in abysmal shooting, missed last stand and other morale tests to finally, mercifully end with my Hq panther blown up in a great billowing cloud of rationality. Chris’ Brits wrapped this up before turn 6 with no platoons lost! 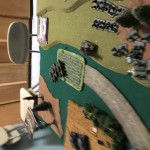 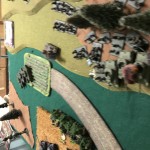 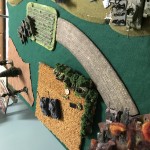 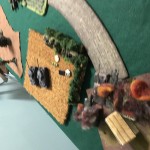 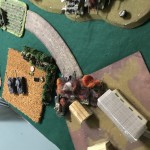 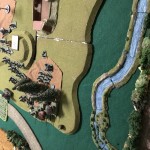 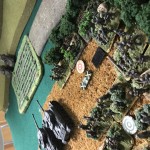 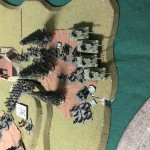 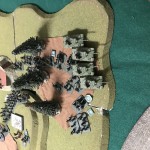 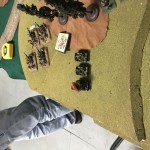 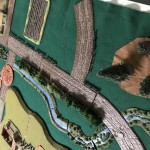 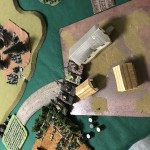 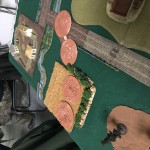 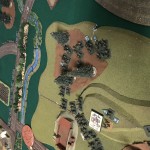 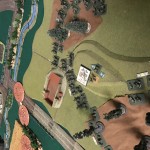 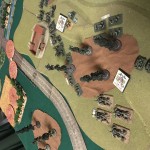 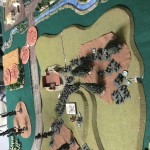 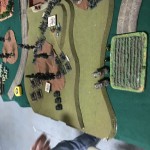 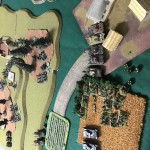