German Force: (Defending) Panzergrenadier Company of 2 full platoons with 1 Panzershrek Team each. 1 Full platoon os Stummels, 1 Platoon of two Tiger tanks.
US Forces: (Attacking) 2 Companies: A Ranger Company with 2 Ranger platoons and a Mortar platoon; and a Tank Platoon of 2 Sherman platoons of three tanks each and an Armored Mortar platoon.

The crossroads in the Bocage was the Objective which the Germans were trying to hold, and the high ground overlooking that crossroad was the Objective the American Rangers were assigned to seize. The US Mortars were able to pin down the defending infantry but little else, and three assulats by US Rangers were beaten back. One platoon of Shermans was ambushed and destroyed by six Stummels, then the US Tank Command Team knocked the Stummel platoon from the field. The Tiger reserves finally arrived Turn 5 and one was knocked out by a Sherman! However by Turn 6 both Ranger platoons were shot to pieces and their Captain dead, the Panzergrenadier Team passed last man standing and held its position by the hill, the German 2iC got a lucky Panzerfaust shot in to kill off the last Sherman and at the end of Turn 7 no Allied units were within 8 inches of either objective, both of which were still controlled by the Germans. German losses: 1 platoon of 6 Stummels. US Losses: 1 Ranger platoon, 2 Sherman platoons (3 tanks each), Ranger Command.

Uploaded image is of the end of the battle: both the high ground and the crossroad remained in German hands as the firing ceased. 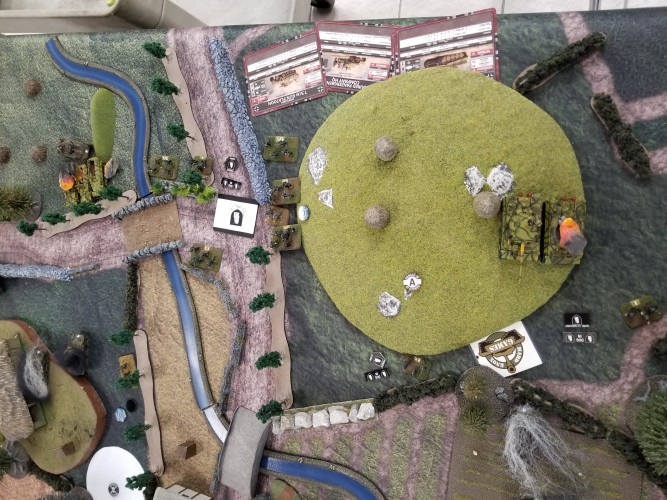