The Germans deployed a Tiger platoon and one Fallschirmjager platoon on the left flank, three Panzer IV’s along with another Fallschirmjager platoon and two 7.5 cm AT guns in support on my right flank. The center was held by the Panzer IV and Fallschirmjager’s HQ’s with an 8 cm mortar platoon in support. The Americans had two Armoured rifle platoons with one on each flank with a Sherman platoon on their right flank, and a Stuart platoon on their left with two M8’s in support. Their center was held by the Sherman and Armoured rifle HQ’s with a 3-inch tank destroyer platoon in support.
The battle opened with the Americans attacking the German right flank. The rifles moved behind a forest, with the M8’s not too far behind. The Stuarts moved up and engaged the Panzer IVs with ineffective fire. On the other side the rifles and Sherman’s moved up behind another forest. The Germans responded by moving up their infantry on both flanks. The Tigers were able to knock out one of the Sherman HQ tanks. The 7.5 cm and Panzer IVs returned fire at the Stuarts with only one getting bailed; this set the tone for the remainder of the battle.
From this point on the German left flank remained relatively quiet with most of the action happening on their right. Most of their infantry on this flank was lost to a series of assaults with them taking a couple of enemy riflemen teams with them. The 7.5 cm’s were taken out on turn 2 by the Stuarts, with the Panzer IVs having a hard time killing anything. They eventually lost the objective on the right flank after the last tank was taken out, with the Americans winning the day having lost only the Sherman HQ, a couple of the Stuarts, and a handful of the riflemen. The Germans lost a Panzer IV platoon, the 7.5 cm platoon, one Fallschirmjager platoon, the mortars, and a couple of teams from the second Fallschirmjager platoon. 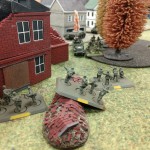 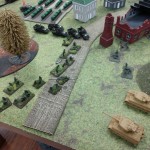 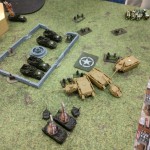 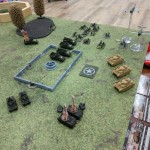 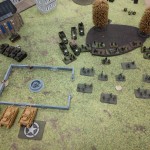