British Buldog rolls through the enemies

British Paratroopers had to take one of the crossroads in the village near Caen.
Most of the troops were deployed in the fields near the village. Heavy recon helped establishing safe positions very close to the buildings. On my right flank I was able to deploy two infantry platoons in the fields 8 inches away from the buildings (with the help of two recons). Behind the infantry there were platoons of bofors and vickers hmgs with some help of Churchill tanks. In the middle I had a platoon of 6pdrs behind bocage and mortars on the hill. On the left I deployed one paratrooper platoon with recon.
My enemy had one platoon of infantry, 10.5cm arty and 88 AA near the left objective and one infantry and other 10.5cm arty in the village near the second objective. AT guns were in the ambush. Panthers and recon were left in the reserves.

As there was no enemy Luftwaffe the bofors AA with platoon of vickers HMGs started pounding through the German occupied houses. Two of the infantry platoons advanced through the field and under the covering fire.

First of the infantry platoons assaulted one of the buildings but was forced to retreat due to heavy enemy fire. The other platoon assaulted second house and due to the cover was able to advance without being pinned and kill all the enemies inside. After that Brits entered the now empty building. Mortars destroyed one of the 88 AA, so the RAF support was able to bomb the artillery in the village killing two of the guns. The right flank was ok. On the other hand, the paratrooper platoon on the left flank was massacred by enemy infantry and arty.

The heavy close quarters fighting in the houses continued, but in the end one German platoon was not able to stand against battle hardened paratroopers. British aircraft together with mortars killed the infantry platoon on the left flank and the last 88 AA. Even the panthers from the reserve were unable to turn the tide of the battle, so they retreated (no platoon was able to hold the force morale). British lost a lot of infantry (but no platoon was reduced to 3 bases) and some recons. 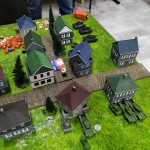 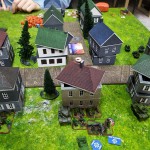 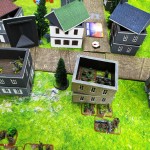 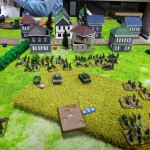 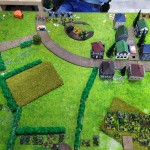 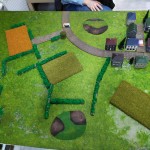 1 Person Has Recommended Tomas Czysford For a Commendation