Mission was Hasty Attack, Germans as the attacker, Soviets defending. My opponent brought lots of arty, T-34’s, some infantry and SPG’s. My reserves were the Panzergrenadier HQ, first platoon, Wespe battery, Tigers and Panzer IV’s. I’ve deployed my guns around the middle, the 251/9’s to the left the pumas and second platoon to the left. On the first turn not much has happened. Few shots fired here and there. Moved up my pumas and the 251/9’s. I’ve shot at the BA-10s and managed to wipe them. Second turn saw my arty come in from reserve and a few shot from my 251/9s into the soviet arty on the left. Third turn saw my Panzer IV’s show up, by with his first reserve roll, my opponent brought up the SU-76’s and killed the Pumas. On the fourth turn I’ve managed to kill them with the panzers and rolled towards the objective with them and the fresh panzergrenadiers. My opponent assaulted my 251/9’s from the woods and destroyed them. On the fifth turn I reached the objective with my panzergrenadiers. My opponent’s T-34’s rolled onto the battlefileds and killed a few Panzer IV’s. He moved his backfiled infantry towards the ovjective to push me off. The sixth and final turn saw me digging in on the objective. I’ve managed to kill his infantry with the sMG-34’s and hold out long enough to win the game. 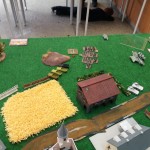 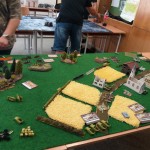 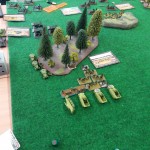 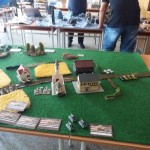 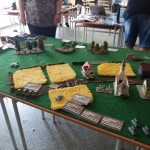 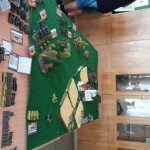