After blocking the Germans from breaking through to Hill 314, command decided it was best to pursue the German's and to bring them to decisive battle.

The British Sherman Squadron and Motor Company sallied forth and found the Germans, reinforced by a platoon of infantry after loosing too many tank in the Lorient region. Battle was joined immediately. 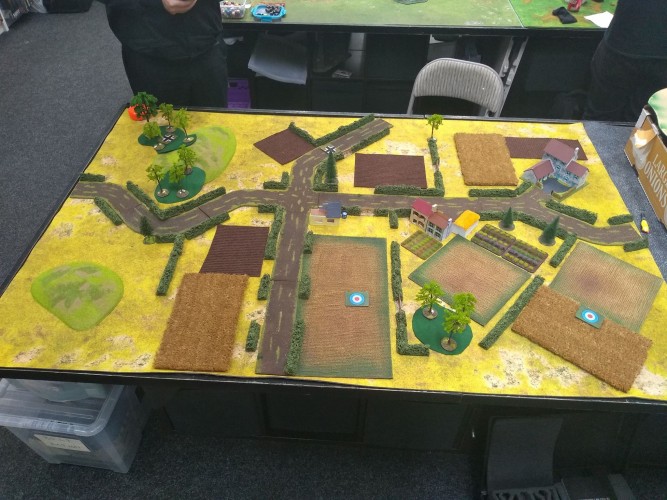 The Lorient Region. Germans quarter in the upper left, British in the lower right. 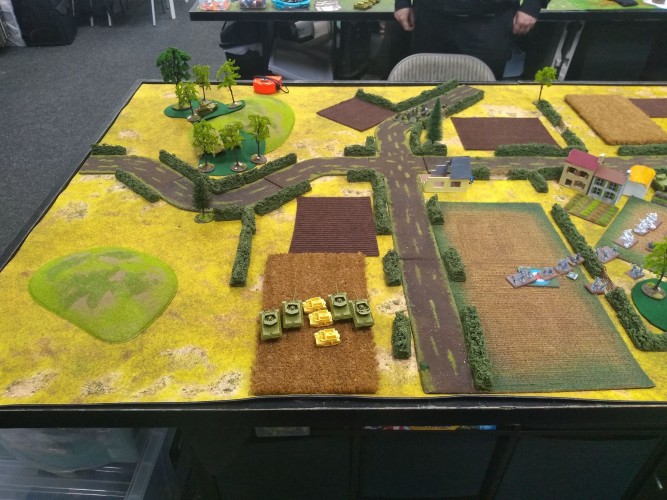 The Motor Company Universal Carriers again spearheaded the actual real Achilles SP Anti-tank Battery. This time was to the flank to oppose the Panthers hiding in the back of the woods. 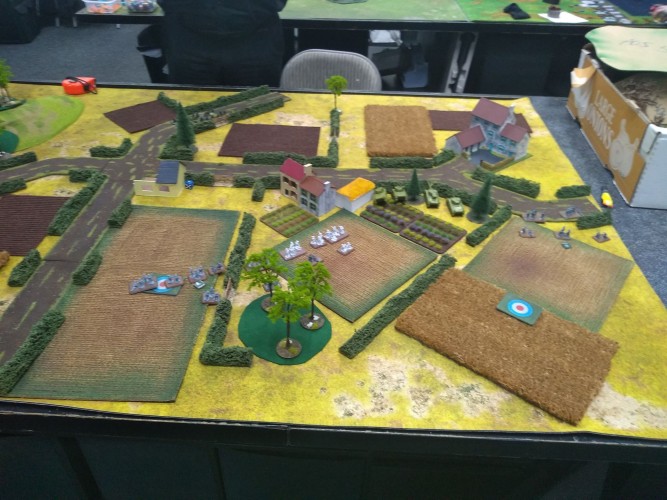 The rest of the Motor Company deployed to screen the two German objectives with 6 Troop in support to oppose any Mark IV or Tiger's coming in from Reserve. A Panzergrenadier Platoon dug in on the objective up the road from the crossroads.

All Quiet on the Lorient Front

At first, there was no German reserves so Gerry held fast. Despite no reserves arriving either, the Achilles Troop moved to the edge of the woods to head off the Panthers whilst the Universal Carriers moved up the road, still just out of range of the Panzergrenadiers.

A Mark IV Zug then arrived from reserve, engines blazing as they dashed behind Panther Hill, emboldened by their commander shouting them to go forward. 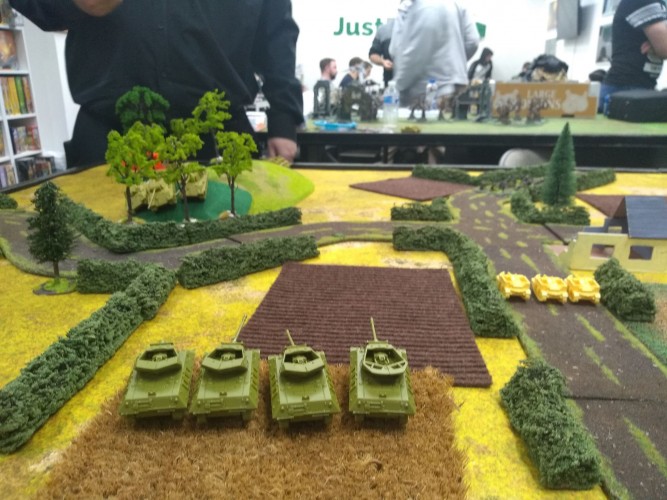 The Panther Zug blitz's forward, fired a devastating volley of 7.5cm cannon fire at the Achilles and Scoots backwards. In a fury of screetching metal and panicked voices...three crews bail out but, noticing that their vehicle is fine, one crew bails back in, taking aim at the near and far horizons for more dasterdley German attacks.

As the Mark IV platoon moves around the back of the hill and the Panther HQ moves out from the woods, 4 Troop turns up and takes position behind a hill to the left of the Achilles. 4 Troop's Firefly takes careful aim at the HQ Panther, says a quick prayer and hopes to get Lucky...but misses the Panther at such a long range. The Achilles battery holds moves up to the hedge line,scanning every corner for targets.

The Universal Carriers start to pour Bren Gun fire on them as the infantry move to the hedge line, the exultation's to Follow Me! being both heard and falling on deaf ears, depending on who was doing the listening. 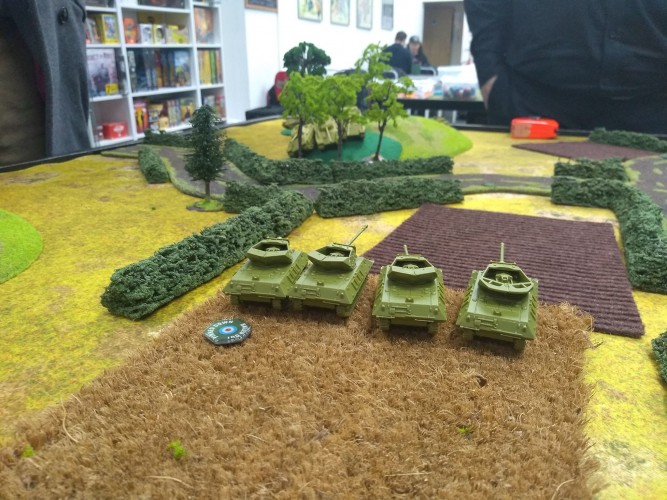 Panther's return after unleashing...not as effective fire upon the Achilles as they hoped for. 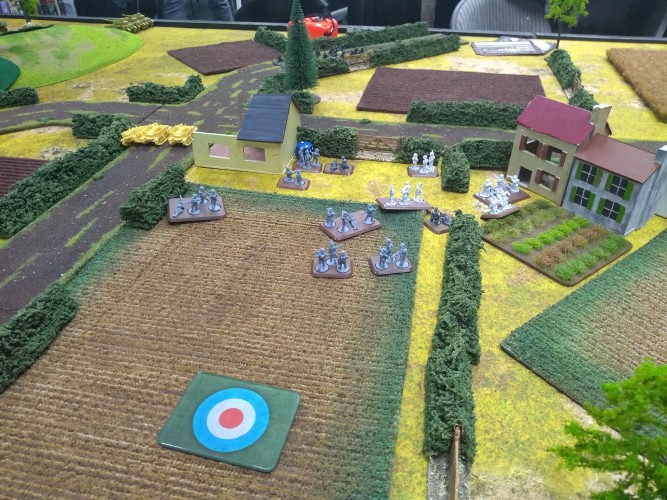 The battery survived with three bailed out guns, one crew of which, having fixed the repairs on the gun, re-mounted.

5 Troop came from Reserve. Bolstered by the reinforcements, 5 Troop moved up to the hedge line. On the right, 6 Troop moved up to take a flanking position on the field that the Motor Company were going to attack through, putting down a base of fire on the Panzergrenadiers. The hardy German's only lost on MG42 team despite the storm of bullets and cannon fire from the entire Motor Company and 6 Troop.

Sensing that they were going to get flanked, the Panther's moved back up the hill behind the wood, taking a shot at the Universal Carriers and blowing one to utter smithereens. 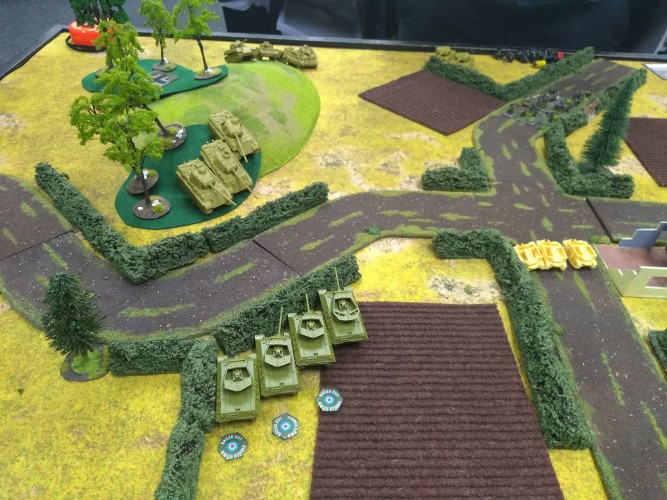 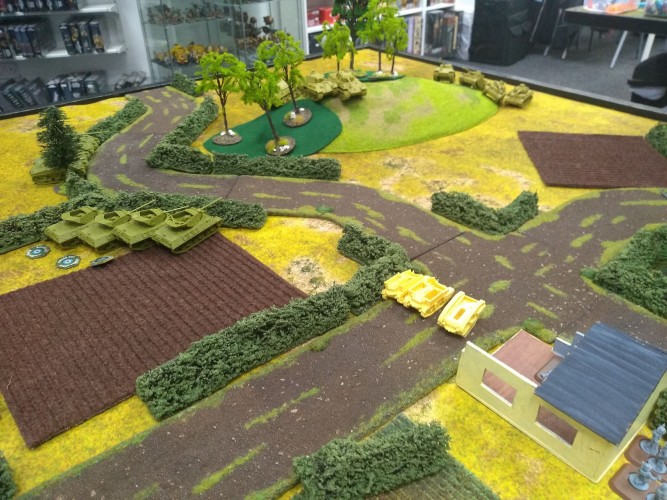 The most vindictive shot ever. 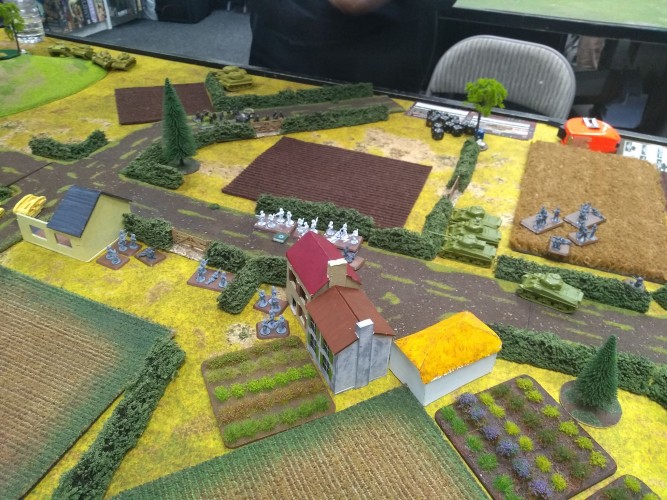 As the German's had ran out of reserves, time to encircle the Germans. 2nd Platoon frantically digs in on the road under fire from the Panzergrenadiers.

Carnage in the Woods

With the Sherman Squadron HQ arriving and dashing to the front line, 4 Troop moves to flank the Panther's on the hill top whilst 5 Troop in part crosses the road to shoot at the Panther HQ. The Panther survives but 5 Troop looses a Sherman as the Mark IV platoon breaks through the woods to counter the flank.

4 Troop looses 1 Sherman and 1 Firefly for bailing 1 Panther and the rest of the Troop retreats into cover, lucky to not have been entirely wiped out. 5 Troop looses a Sherman. 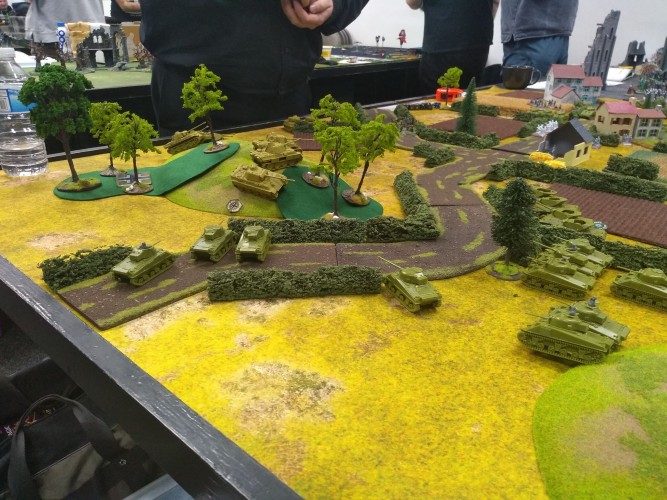 Channeling the cavalry spirit, Sherman's rumble forward, looking to destroy the Panther's in their thin side armour. 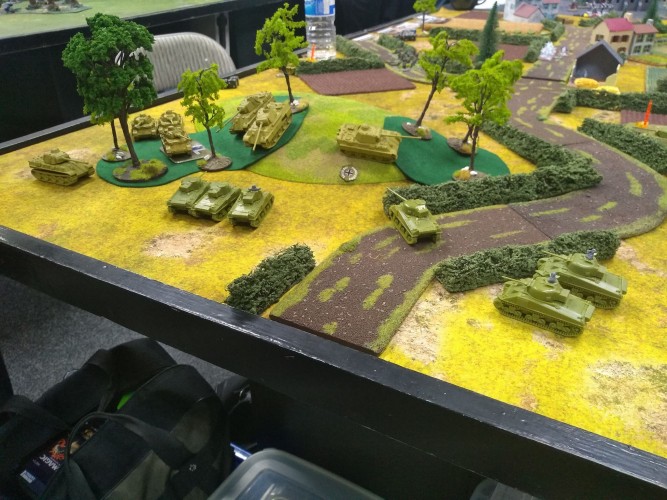 Only to be countered flanked by the Mark IV platoon!

The Achilles Battery and the Tigers trade murderously large caliber shells, the Achilles' bailing out but remounting and the Tigers either being missed or the shells bouncing off their thick front armour. A Tiger bails out then bails back in.

The Motor Company and 6 Troop pin the Panzergrenadiers and stay put, trying to reduce their number. However, sensing an imminent assault, they unpin and pour high rate of fire MG42's onto the British, casting doubt as to whether the assault should go ahead or not.

The melee in the woods continues, with the HQ Troop loosing a Sherman.

6 Troop move up to support the Motor Company on the right and the Universal Carriers move up on the left, narrowly dodging a Panzershreck rocket. Not wanting to loose another carrier, they back up to just outside their range.

Leaving their mortars behind, 3rd and 2nd Platoon move up, laying down fire as 1st Platoon hammers the Panzergrenadiers. The Germans are barely suppressed in time for 3rd Platoon to assault. Despite the murderous defensive fire and some early successes, the Panzergrenadiers utterly defeat the Tommy's taking prisoners. As the Germans re-take their foxholes, 2nd Platoon lets loose a vengeful battle cry and assaults them once again. Defensive fire takes a toll and the assault peters out rather quickly, two sections of 2nd Platoon retreated back into the field to where the Old Man was stationed.

Undeterred, he gestured back to 1st Platoon who moved up, the Universal Carriers continuing their Bren Gun fire as 6 Troop flanked the Panzergrenadier Troop. Over the din of battle they heard one Tiger brew up and had confirmation from the Achilles Battery that the other one was knocked out. This was it.

The Achilles Battery leader surveyed the scene and heard the frantic chatter from the Sherman Squadron - Gerry was pressing them hard. He decided to send his battery out to counter flank the Panthers and destroy them once and for all.

The Achilles Battery rolled up the hill, snap firing at the rear of the Panther's, one crew bailing out. A loud explosion erupted as the Sherman's rained shells on the Mark IV's and the Firefly of 5 Troop found it's mark in the turret front of a Panther.

3rd Platoon's mortar section abandoned the attack and assisted the dead and the dying. 2nd Platoon regrouped and it's mortar section came up for the final assault. 1st Platoon made contact first, eager to avenge their fallen comrades. Defensive fire laid low two of their sections but on they pressed, reducing the Panzergrenadiers to a single section. But on they endured.

2nd Platoon gritted their teeth, the last platoon of their company. Emboldened by 6 Troop flanking the Germans and with one final howl they barrelled over the hedges and...Gerry surrendered. They had lost their will to fight. The Motor Company had secured an objective and the Sherman Squadron had held up all the German panzers so they could not make it out of the woods to contest the objective.

The British Empire had won the field of battle today. 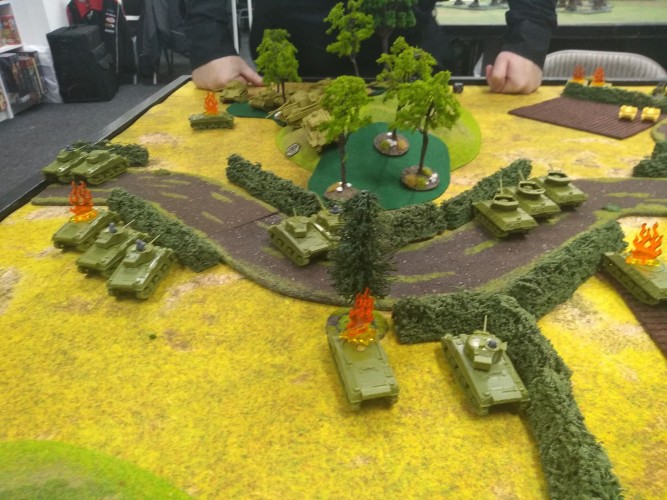 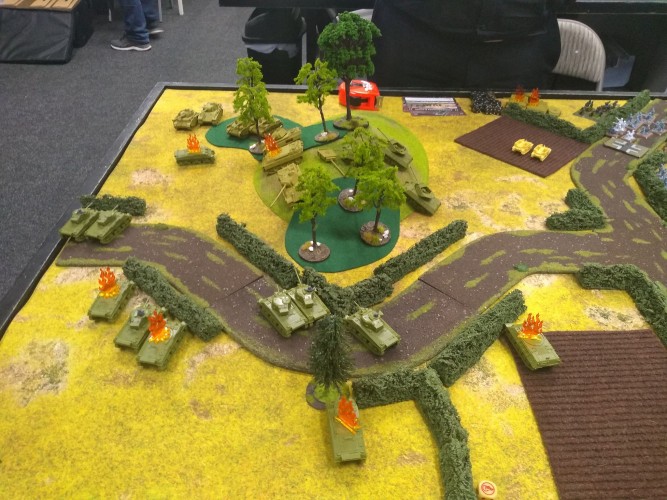 A tank here, a tank there, fire everywhere. 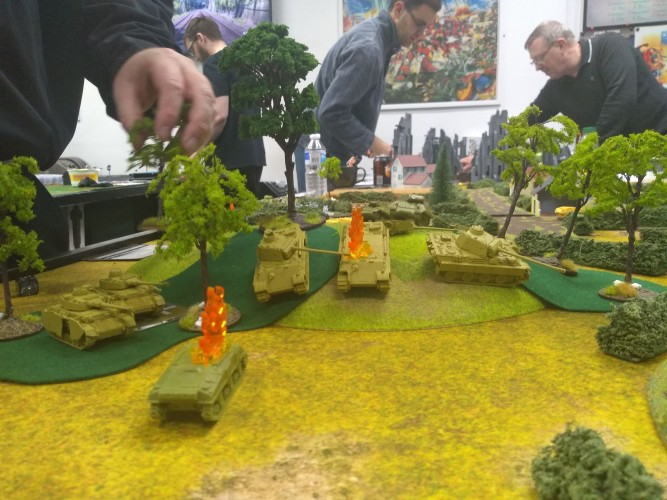 The Achilles set out to achieve their only goal - destroy the Panthers! 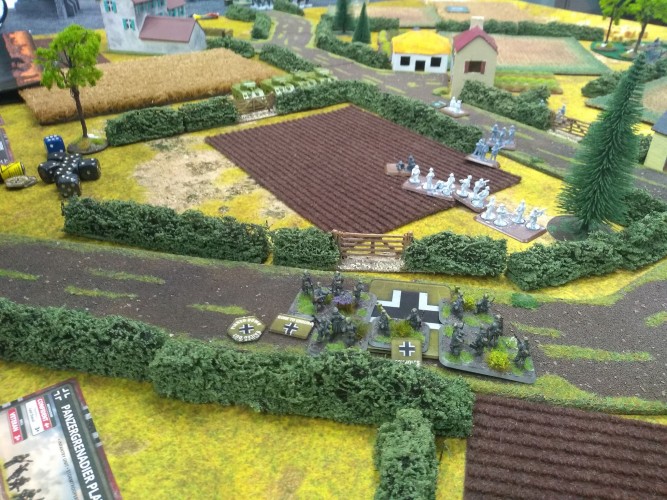 Casualties are mounting, but the British Infantry attack onwards. 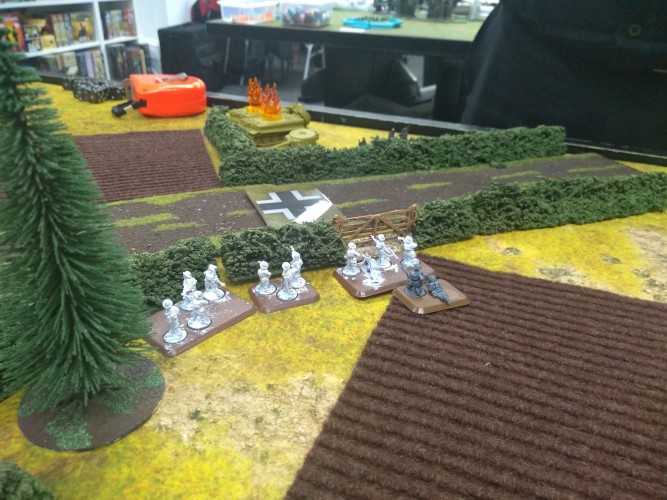 Gerry is hit hard and falls back to the hedge opposite the road. The Old Man sends for 1st Platoon and 6 Troop to flank them - 2nd Platoon must carry the day! 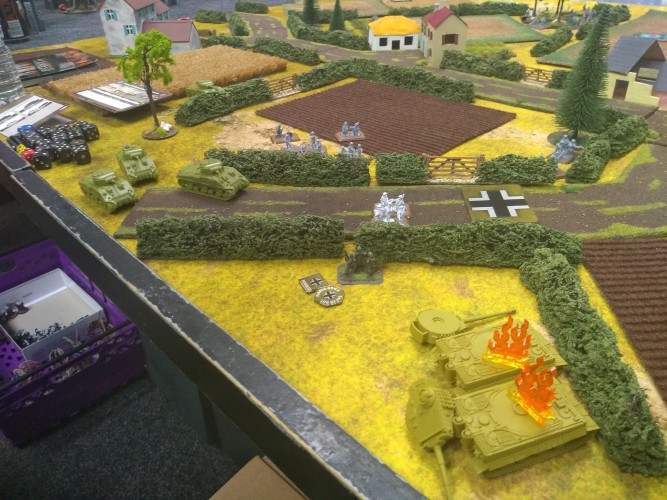 In the name of King and Country, 2nd Platoon do just that!