After the battles on the beach the U.S landing force breakthrough the AtlanticWall.
A German PzGren Kompaine launching a counterattack to the U.S ARP Company.
Battle mission – CounterAttack
Deploy:
German:
De Kommandant drop one of the PzGern Zug in the centre of the deploy zone and 1 Sd.Kfz. 10/4 AA Zug with upgrade armour deploys nearby.
1 Mörtel Zug with 2 guns has to be placed on the left side of the PzGern Zug.
And at the end of the left flank, we have the Jägerpanzer Zug with 3 StuG III from Fallschirmjäger Bataillon.
U.S
The US forces deployed 2 ARP platoons and 1 Sherman 76 platoon, 1 Sherman platoon at the left end of their deployment zone.
Turn-1
U.S
All U.S forces moving with the higher speed to their left flank, they want to take the objective ASAP. But sadly there are two Sherman 76 tanks bog-down in the forest.
German
The PzGern Zug and Sd.Kfz. 10/4 AA Zug are moving with the full speed, only two teams reach and took the church in the centre of the map. The StuG III Zug move forward to the farm.
Turn-2
U.S
One of the ARP platoons dismount on the road and moving to take the objective, the other ARP platoons also dismount at the back to support the guys in front.
Sherman 76 platoon move nearby the field but sadly still have one 76 stuck in the woods, Sheman platoon takes the fence cover in the field. 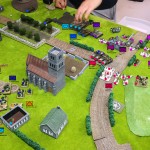 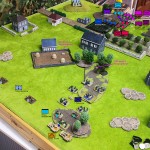