Week six: once again I find myself switch hitting to give Liam O’Brien a proper game. I’ve chosen a confident trained US armored co( feeling the 4th armored Divsion). Liam, opted to defend with a tiger company. As with most of the scenarios in this campaign, the defending force to put 40% of the force into the reserves. In this scenario, delayed,deep scattered. No chance of reserves til turn 3, a limited amount of armor, and Jerry has to roll to see where his reserves come in. However, the scenario gives Jerry an Ambush, and the Axis performance in the campaign gives the Germans the option of moving an objective 4 inches in any direction.( is there really any reason to move one in any other direction but away from the attacker?)

In support:
Recon: 2 jeep and an armored car
“Eye Spy” an observer tank x1
2 batteries of 105 self propelled priests( x3 vehicles each)
Pioneer pltn( now a card rather then a normal unit, but never leave home without them)
A card for the soft skin transport( read trucks)
And a card for hedge row cutters

My plan: taking cheaper confident Trained(CT)units allows you more assets in your list at the price of being easier to hit. But exactly how does one take advantage of the numbers? The key is massed advancing and overwhelming. The 4th ed rules really do make even trained arty units effective( although the support priests make their skill on 3+)
With the Sherman 105’s and 2 batteries of priests, that’s 3 arty templates coming at Liam and his troops.

Liam is electing to start with his HQ tiger, a pltn of armored panzergrenadiers, a pair of 7.5 AT guns and a pair of stugs.

The plan is simple enough: generally engage Liam’s on the field assets, draw out his ambush, leaving enough of my units for the open objective. I know from years of experience, trying to crack open tiger tanks from the front is a fools errand. I’ve had many a game rolling a fist full dice only to score one or 2 hits, and watch my opponent laugh them off. I have only a single platoon of Sherman 76’s, so I have no intention of centering my strategy on a duel between Liam ‘s single tiger and the (CT)76’s, not when there are 4 more on the way!

Top of the first, US at bat: Liam had deployed his hQ tiger in the woods between the 2 objectives, the center one placed by myself and pushed back by Liam circled in yellow. On the axis Far left the pair of stugs, toward the center the 7.5 AT guns on the hill in front of the church ruins. With infantry and gun teams starting in prepared positions, the At guns have a good vantage point, if a bit exposed.They’ll need to be dug out. The Sherman 105’s, lead by the Sherman “Long Tom” are positioned forward and near the center line due to shorter range and the proximity of direct support. You can ask the Sherman 105’s to get stuck into the line, you don’t want priests anywhere near it. The Rt flank priests lay down a line line of smoke, the left flank priests and Long Tom’s 105 range in on Liam’s AT guns, taking out 1

I send the recon barreling down the road followed by the soft skin trucks transporting my pioneer platoon, followed by 2nd pltn the 4 strong 75 Shermans. The pioneers can’t disembark from the trucks this turn, but I keep the recon and the trucks close to the bocage wall to ensure cover. It’s a gamble. I’m pretty sure this will draw out Liam’s ambush, the question is how bad the damage will be. Just trucks or a recon team won’t get Liam to bite. Soft trucks full of infantry… that will do it.But I make a miscalculation. I failed to realize how close the woods are. Liam will quickly make me pay for that.

Perhaps leaving the ranged in marker might have prohibited Liam, but I doubted it hence, I brought the arty on to the AT guns.

Meanwhile on the Allied left, the US HQ, 1st pltn(the 4 76’s) and 3rd pltn (the 3 Sherman 75’s) are all making their way along the table edge, using the bocage as cover.

Bottom of the 1st, German at bat:Liam maneuvers his stugs past my smoke bombardment, and and unloads his mg fire into the recon, soundly killing a Jeep. Then Liam dutifully pops his ambush. This sequence will be learning note #3: the German infantry coming out of ambush are in foxholes/prepared positions. Liam is careful not to have them move or shoot. They’re already starting in the forest, but for infantry, foxholes are sufficient for 4th ed. Liam’s Germans assault the trucks. No defensive fire even if the trucks had weapons. Recon is close enough to lend some defensive fire, but it won’t be nearly enough. The onslaught obliterates the trucks… a couple times over. Here’s the learning point: so in 4th ed there is no unarmored vehicle save in assaults…and none for their passengers. So just like that my pioneers and trucks go away in a big puffta! And the panzer grenadiers fall back to their foxholes in the woods. Well, I wanted to draw the ambush, just cost a bit more then anticipated. Kudos to Liam though, that was a text book assault… Dare I say …”play of the week”?

Top of the 2nd, US at bat: the US HQ, 1st and 3rd pltn advance on the Allied left. The Sherman 76s take position and fire on the tiger pltn… doing nothing. The rest of the US left flank makes for the objectiveUS 2nd pltn moves up onto the bridge. And open fire up on the stugs. The last 7.5 AT guns succumbs to the repeat bombardment from 2 batteries. The rt flank priest battery ranges in on the German infantry, and kills 3 stands. And so ends the US at bat.

Bottom of the 2nd, German at bat. Not looking to face the re-rolls from the the repeat bombardment, Liam’s infantry falls back farther back into the woods. The stugs fire on the Sherman’s holding the bridge. Liam’s tiger blitz’s successfully, and fires 2 shots, choosing to put both shots onto a single 76, killing it soundly. The German halftracks mass mg fire on the recon, killing the other Jeep. He’s taken 2 pltn, to my 1. And his tiger HQ is making short work of the 76’, the only pltn that has a prayer against the tigers.

Top of turn 3, US at bat: time is getting late, And my precious assets to fend off German heavy tanks is sure to take a drastic reduction this turn. The center objective is well defended., but the left is very open, even with the river in between. The Sherman Hq and the 3rd pltn both make their blitz moves, move their tactical and cross checks, placing the Hq on the objective. The Sherman’s on the bridge fail the blitz move their tactical firing and killing a stug. Long Tom and the 105 range in on the german haltraks, and score squat. Meanwhile the left flank priest battery has ranged in and dropped a smoke bombardment covering the Sherman Hq from the Tiger Hq. I’ve ended my turn on the objective, and there is little Liam can do. US 7-2 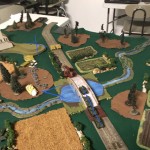 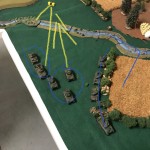 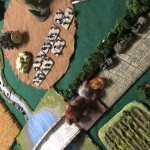 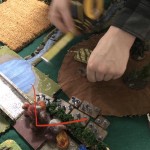 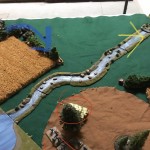 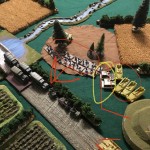 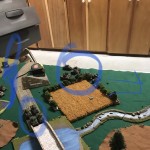 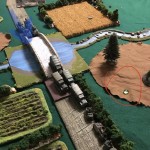 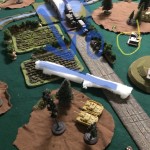 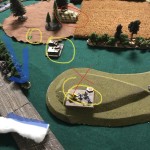 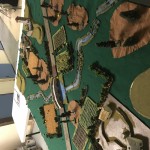 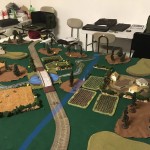 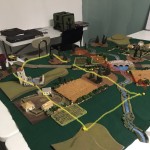 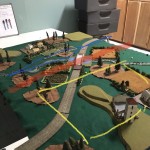 1 Person Has Recommended XX corp For a Commendation